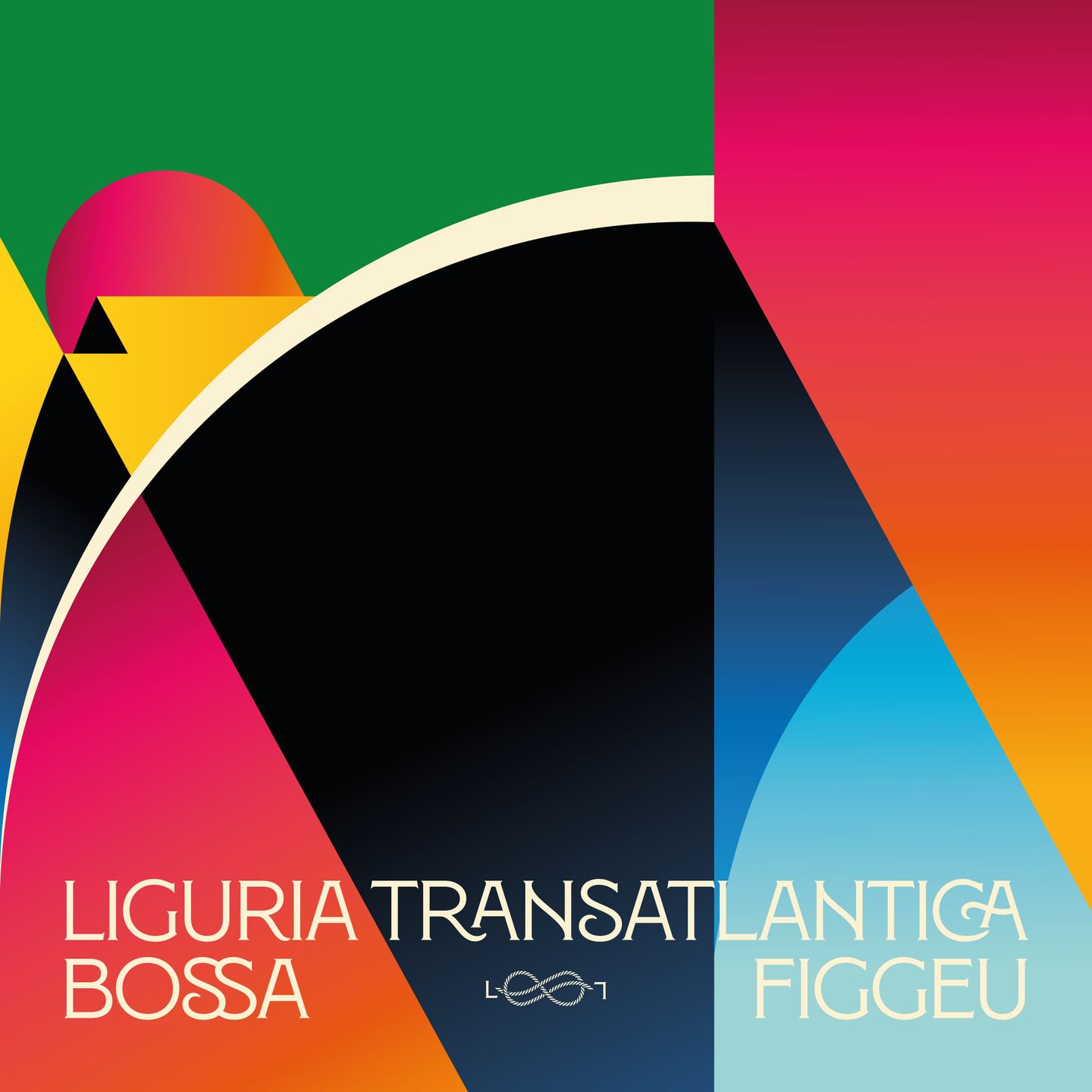 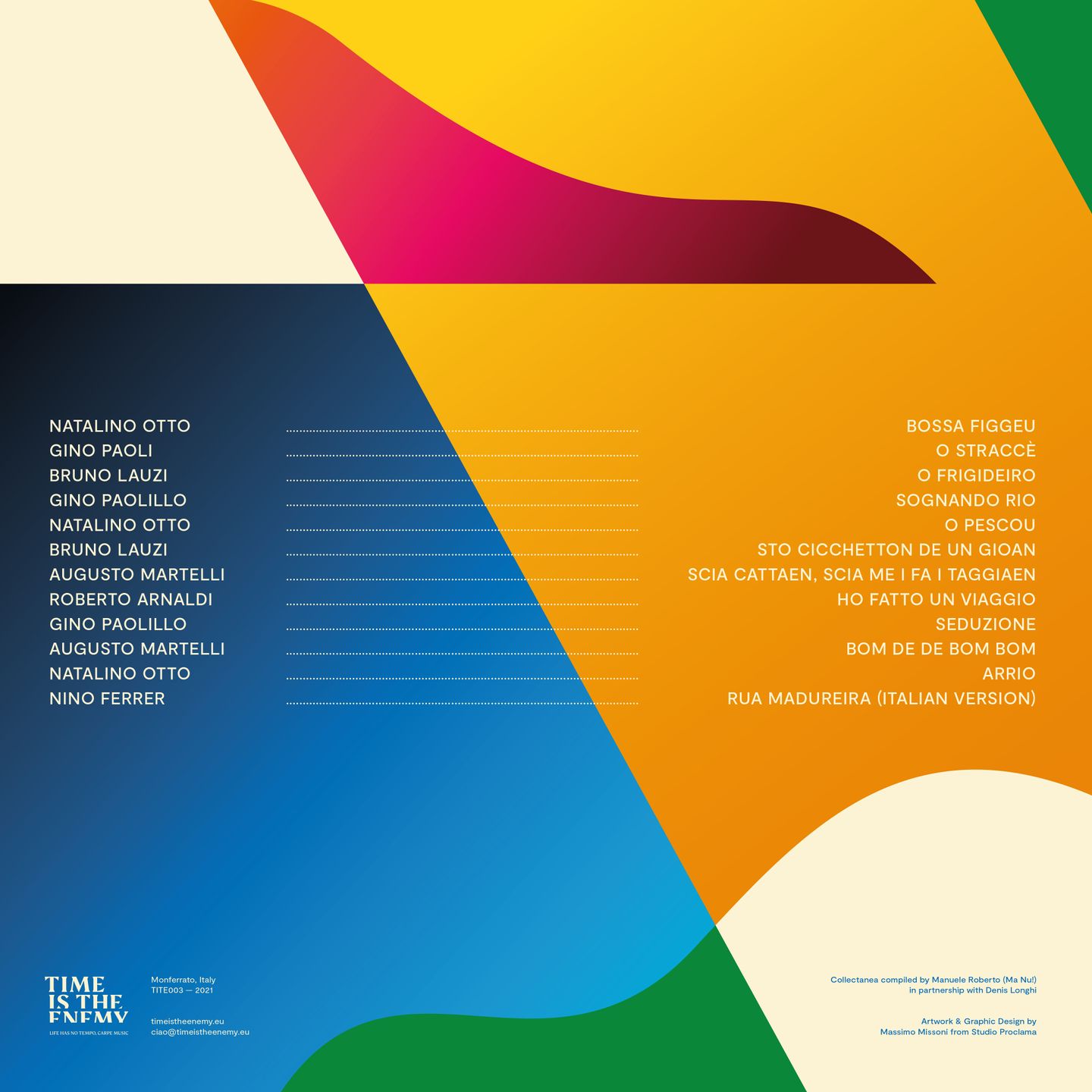 Time Is The Enemy

South American Jazz & Bossanova flavours from 60s & 70s in Liguria, north west Italy. Melody sounds really close to Brazilian Portuguese and instrumental tracks smells of South American Jazz.
Nonetheless, the sound landscape clearly reflects the Italian Library Music of the time. This mingling was made possible by the commercial and cultural interconnections during the discovery of the New World: the local Ligurian language was influenced by new stimuli from the new territories and vice-versa. Moreover, from the end of the Nineteenth Century, a strong migration of Italians involved South America, with numbers comparable to the Italian migration in the USA, but less known because less represented in films or narrative.

As a result of these connections, these songs sound mellow, carioca and exotic, based on the phonetics of one of the most musical, folkloric and peculiar Italian dialects.

The artwork project is a homage to lithographs and ADV that were inspired by the first tourist and migration trips departing from Genoa towards Rio De Janeiro. The lithographs were recovered by “L’Image” an existing art gallery in Alassio, a small town in Liguria.

"Bossa Ligure" can be seen as a micro-genre and a different form and aesthetic of Brazilian music, which is unknown to many, but that we would like to make available with this collectanea. A musical and a cultural expression which reveals a strong influence and connection to the Brasileiro sound in an unexpected territory.

Augusto Martelli – Scia Cattaen, Scia Me I Fa I Taggiaen

The motor hasn’t had time to cool down and the belt drive is feeling the fatigue. But Charles Maurice is the kind of DJ who just can’t let a turntable rest. After steaming up the slipmat with three sexy compilations of French Boogie, Charles Maurice is back with Volume 4.In the late 70s and early 80s, while France was still firmly tuned into variety-show pop, a few enlightened ears and souls picked up the hypnotic beat of funk from across the Atlantic. These first warrior monks spread the good word in discotheques, jumped on newly available frequencies to fill the airwaves and, in some cases, took up instruments themselves to unabashedly build on the U.S. model. In a short decade stretching from the late 70s to the late 80s – just a blip on the scale of music history – they turned out material in abundance. Lush productions with colorful covers, groovy typeface and creative photo shoots…But first and foremost, they made music weaned on, spoon-fed and imbued with funk. Music defined by a groove with a robotic beat (Djeneba) that clearly hears hip-hop banging on the door, where layers of synthesizers, handclaps (Eric Chotteau), horns and African percussion line up and follow the all-powerful lead of the swelling slap bass (Cyrill). Music that tells everyday stories, both humorous and lovelorn (Serge Delisle), and often packed with pheromones just waiting to be released on the dance floor or sofa (Chris O’Hara). Shaped by synthetic textures, these productions are also spiced with Caribbean and Creole arrangements that reflect the West Indies’ critical contribution to French Boogie (Wai Kop, Acayouman).With his immaculate tailoring, slicked back hair and clipped moustache, Charles Maurice has once again transformed himself into a HiFi stylus to explore the groove traced by this specifically French musical style. From 45 to 33 rpm, he has traveled the black spiral to bring us a new selection that proudly features a number of rarely heard pieces and even an unreleased track by Marco Attali. True to form, Monsieur Charles carefully crafted this fourth volume from his personal collection of impeccably restored and mastered vinyl recordings.Charles Maurice, where French elegance meets uncompromising musical taste.

Message In Our Music…

After a first year of activity with 3 beautiful single reissues, SOL DISCOS presents its first album, with the compilation Message In Our Music, selected by WAXIST. Focusing on Modern-Soul genre, the selection ranges from 1977 to 1983 and gathers a nice selection of independent and private press records, all officially licensed.From the David Nathan's downtempo previously unreleased version of "Ain't Nothing Like The Love", to the beautiful Glen Missick's gospel dancer "Message In Our Music", the album aims at providing to the listener a glimpse of the wide spectrum of productions that exist in this musical genre.Some of these beauties are officially reissued on vinyl for the very first time, including some highly sought after records such as "Deep Inside Of You" by Harden Brothers, "My Dream" by Harvell Guiton, or "Love With Me" by Don Scott.The album has been fully remastered by The Carvery in the UK, and features liner notes for each of the songs, plus exclusive pictures provided by the involved artists & producers.

** Available exclusively at The Pusher **Atangana Records is back with two afro disco groove tracks from the second album of the mythical Senegalese band Touré Kunda. The tracks "Manso" & “Touty Yolle” were originally released in 1980. The remastered track "Manso" is remixed on B1 by the duo Deni Shain & Mister Francky and B2 with the remixes add part.When Deni struck gold: "It was a warm Sunday in Guadeloupe when I went back for some for digging, after looking through 800 vinyls, I was swayed by the album E'mma Africa from Toure Kunda. Listening to it sent me back to my youth, when I used to play the K7 over and over again.As I replayed the LP, these two songs stood out and I could instantly picture the potential & the remix I could do with Mister Francky."

Founded by the pianist Robin Notte (from the former electro-jazz band WISE) Panam Panic is one of the best Jazz-Groove french bands. Influenced by Musicians like Yussef Dayes, Robert Glasper, Roy Hargrove or Christian Scott, Panam Panic mix up Jazz with groove, Hip hop and electronic textures. Love Of Humanity is their last album.Robin Notte's gamble is to create a Jazz which is sufficiently sophisticated to delight the most demanding experts, yet also accessible enough to initiate neophytes.As such, Panam Panic defends a resolutely actual Jazz, open with no borders or blinders, combining powerful organic grooves with tidy melodies, delicate harmonies and frenzied solos.