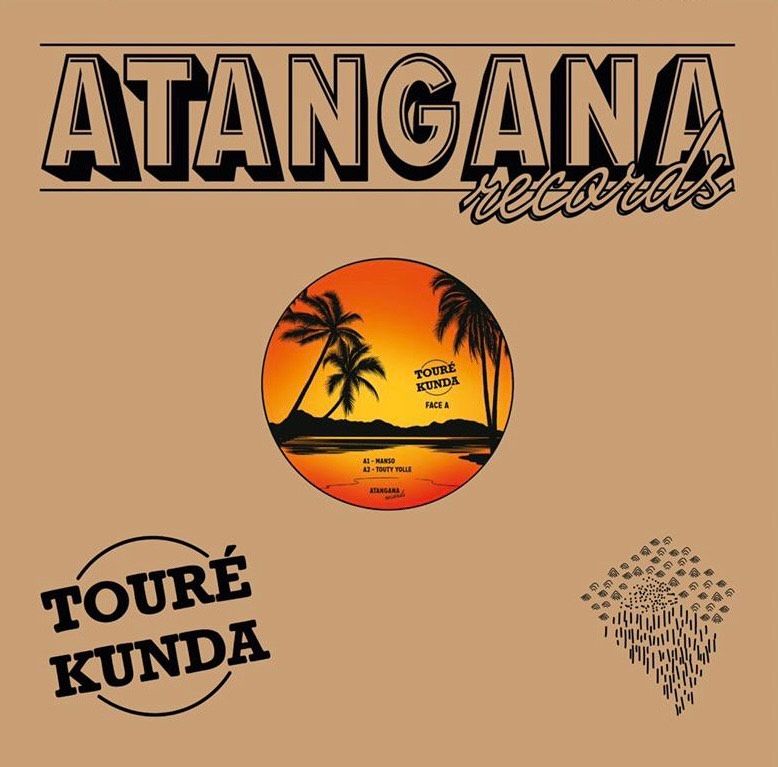 Atangana Records is back with two afro disco groove tracks from the second album of the mythical Senegalese band Touré Kunda. The tracks "Manso" & “Touty Yolle” were originally released in 1980. The remastered track "Manso" is remixed on B1 by the duo Deni Shain & Mister Francky and B2 with the remixes add part.

When Deni struck gold: "It was a warm Sunday in Guadeloupe when I went back for some for digging, after looking through 800 vinyls, I was swayed by the album E'mma Africa from Toure Kunda. Listening to it sent me back to my youth, when I used to play the K7 over and over again.As I replayed the LP, these two songs stood out and I could instantly picture the potential & the remix I could do with Mister Francky."

Favorite Recordings proudly presents Natureza, first album of Joao Selva. The story of Natureza is made of the meeting between two passionate artists who are Jonathan "Matuto" Da Silva and Bruno "Patchworks" Hovart.Born and raised in Ipanema and son of a pastor, Jonathan Da Silva grew up in a community of ex-prisoners and converted artists. He made his first guitar notes before his 10th birthday, under the watchful eye of Wanda Sa (muse of the bossa nova), and influenced by a father who in addition to his work, was also a true music lover with a collection, where black music, rock and classical meet. From the age of 18, Jonathan began a life of entertainer, traveling the world to offer shows for disadvantaged children and intensively practicing the Brazilian traditional music arts (Capoeira Angola, Maracatu, Samba de Roda, Coco de Roda...). It was later in France and in Lyon that he put down his instruments. There he formed the trio Forro de Rebeca in 2008, touring the all country and winning many praise in media. The trio recently joined forces with American producer Maga Bo on the project Sociedade Recreativa, whose album was released in 2016 on The Jarring Effects label.Bruno Hovart is a recognized producer, multi-instrumentalist, and remixer. After passing through Angers, Birmingham and London, he’s based in Lyon since 2001. Bassist and guitarist for various bands, he switched to production in the mid-90s. Passionate about music and tireless creator, Bruno has practiced in almost every imaginable style, when it comes to groove music, collecting many aliases and projects for more than 10 years: Patchworks, Voilaaa, Uptown Funk Empire, Mr President, Taggy Matcher, Mr. Day, Hawa, John Milk, Lightnin 3, The Dynamics or Metropolitan Jazz Affair ... Nothing resists and escapes his talent and production skills. Thus, when he discovered and met Jonathan and his music, Bruno saw an immediate opportunity to broaden the spectrum of his discography a little more, by looking at Brazil.Beyond its traditional heritage, Brazil has always been a land of extremely varied music, influenced by the international scene. Soul, Jazz and American Pop did inspire many local stars such as Chico Buarque, Carlos Jobim, Gilberto Gil, Tom Zé, or Erasmo Carlos. Both fervent lovers of this movement and these names, it’s with the idea to pay them a faithful tribute, that Jonathan and Bruno began the Joao Selva adventure. Together they gave birth to Natureza and embark us for a trip into the heart of the Tropicalist Pop influences of Jorge Ben and Caetano Veloso, the intoxicating Funk of Tim Maia, and the social poetry of Vinicius de Moraes.

Old Souls Carnival is the most accomplished Medline’s album so far, presenting his new direction in composition and his multi-instrumentalist approach. The project is driven by a strong spiritual background with a deep 70's soul jazz fusion influence, raised into a movie soundtrack dimension.Each piece reveals a facet of Medline's music, origins, tastes and character. Playing with shamanic and exotic harmonies, hybridized with distorded psych funk sound and solidely pulsed by unique polyrythmic drum beats.The natural flows of his expression speaks deeply and truely to the senses, traducing 6 months of gathering emotions, traducing feelings, during meditative recordings sessions on the world evolution and reality. The entire album was produced, mixed and mastered by Medline at the family's house, in Messac, offering a perfect immersion in his spiritual and material universe.The fabulous and mysterious handmade drawings of Stéphane Carricondo, are the perfect rendition of Medline's mestized artwork. Rich with a wide variety of colors and influences, channeled by Medline's own hands, this first 12" record released on his label My Bags lives up to expectation. This French-Chilean producer always works outside of boundaries and styles frames, and with this LP shows that extraordinary projects can be expected from him for years to come.

For its second release, NUBIPHONE is proud to present you SUNSHINE, a privately pressed Afro-Jazz-Folk UFO album recorded in 1980 by the Cameroonian Singer, Musician, Actress, Seamstress & Poetess LIZA NGWA.Individually-numbered Official Deluxe Edition, limited to 500 copies!Comes with a beautiful exclusive poster, a handwritten insert from Liza Ngwa herself with the lyrics of the album and a download card.

Les Oiseaux Morts / Back To Life…

French avantgarde Jazz-Funk pioneers Cortex released three milestone albums during the seventies including the iconic Troupeau Bleu. Their music has been sampled by Hip Hop artists such as MF Doom, Wiz Khalifa, Lupe Fiasco and Rick Ross and as a consequence is still very much alive today. Trad Vibe Records proudly presents a first time re-issue of their double sider 7inch single from 1976 Les Oiseaux Morts / Back To Life. We are sure that you will enjoy the melancholic beauty of “Les Oiseaux Morts” and the harmonica driven disco funk of “Back To Life”.

Bruno “Patchworks” Hovart is definitely one of the top producers of today’s groove music scene. After playing as a bassist and guitarist for various bands, he started producing in the mid-nineties and has kept on mixing today’s technologies with the raw spirits of House, Electronic, Disco, Funk, Soul, Reggae & Jazz music’s golden years since then.Following the trail of success left by his various projects as Patchworks, and under many aliases, he’s proved his musical ubiquity and unexpectedly stroke in various genres. For this new EP, he’s back under the EDR Records’ umbrella, following up to his acclaimed EPs called Give My Love (EDR019) and Dedications (EDR021), and meanwhile pursuing a comeback to his early love for House music.Many House music diggers would indeed remember that before Favorite Recordings was launched in 2006, Patchworks and Pascal Rioux produced many Deep-House titles on the Rotax Disques imprint. Besides since the late 90s, Patchworks has also collaborated with labels such as Q-Tape, or Still Music, delivering many clubbing hits such as “Million Toes”, “Sugar”, or “Minautor” to name just a few.On this 4 tracks EP, he again delivers 4 dancefloor killers, ready to convince any listener from old-school “footstomping” aficionados, to Detroit House heads. For the occasion he also invited his long time mate Eric Duperray aKa Mr Day, who brings his soulful vibes to the mix.