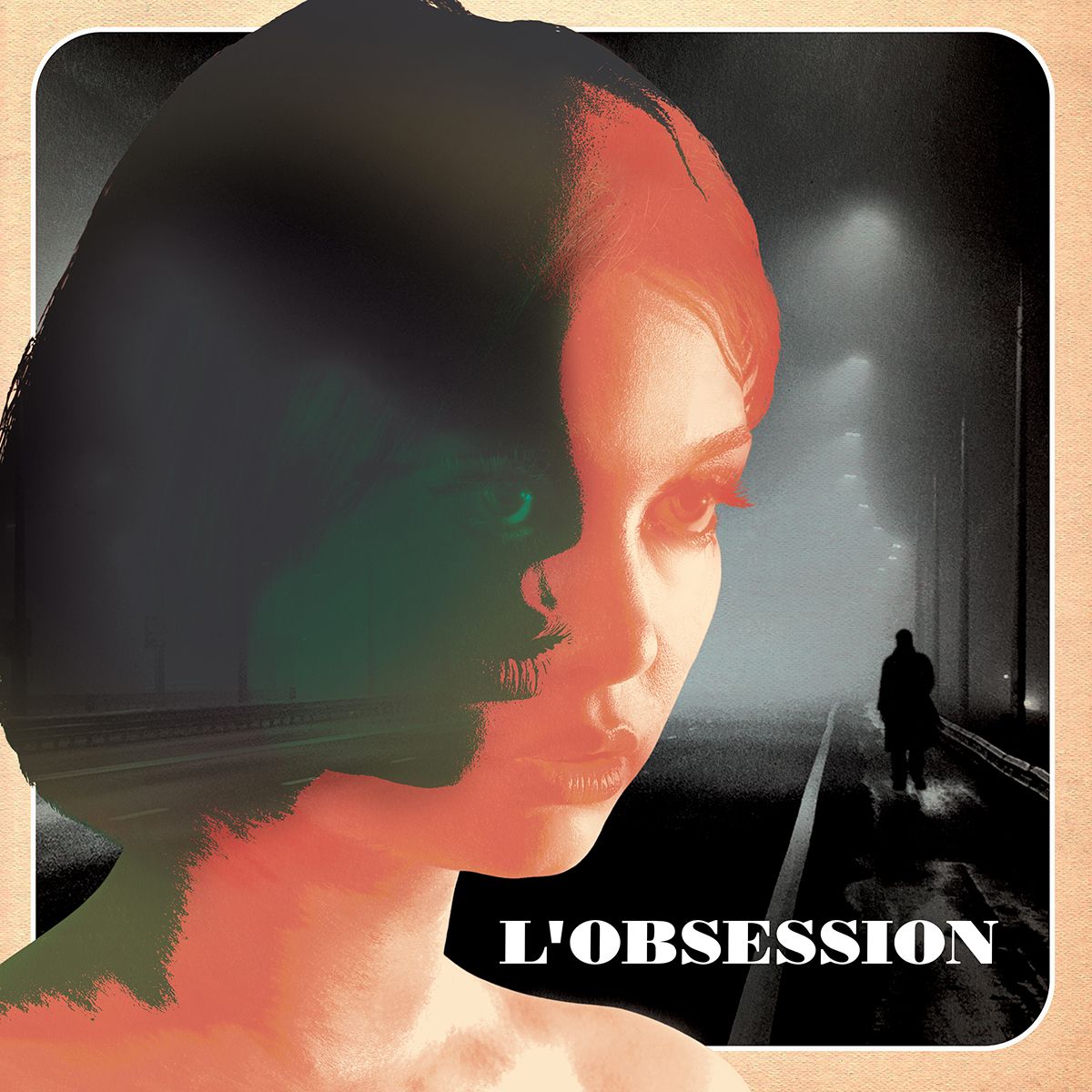 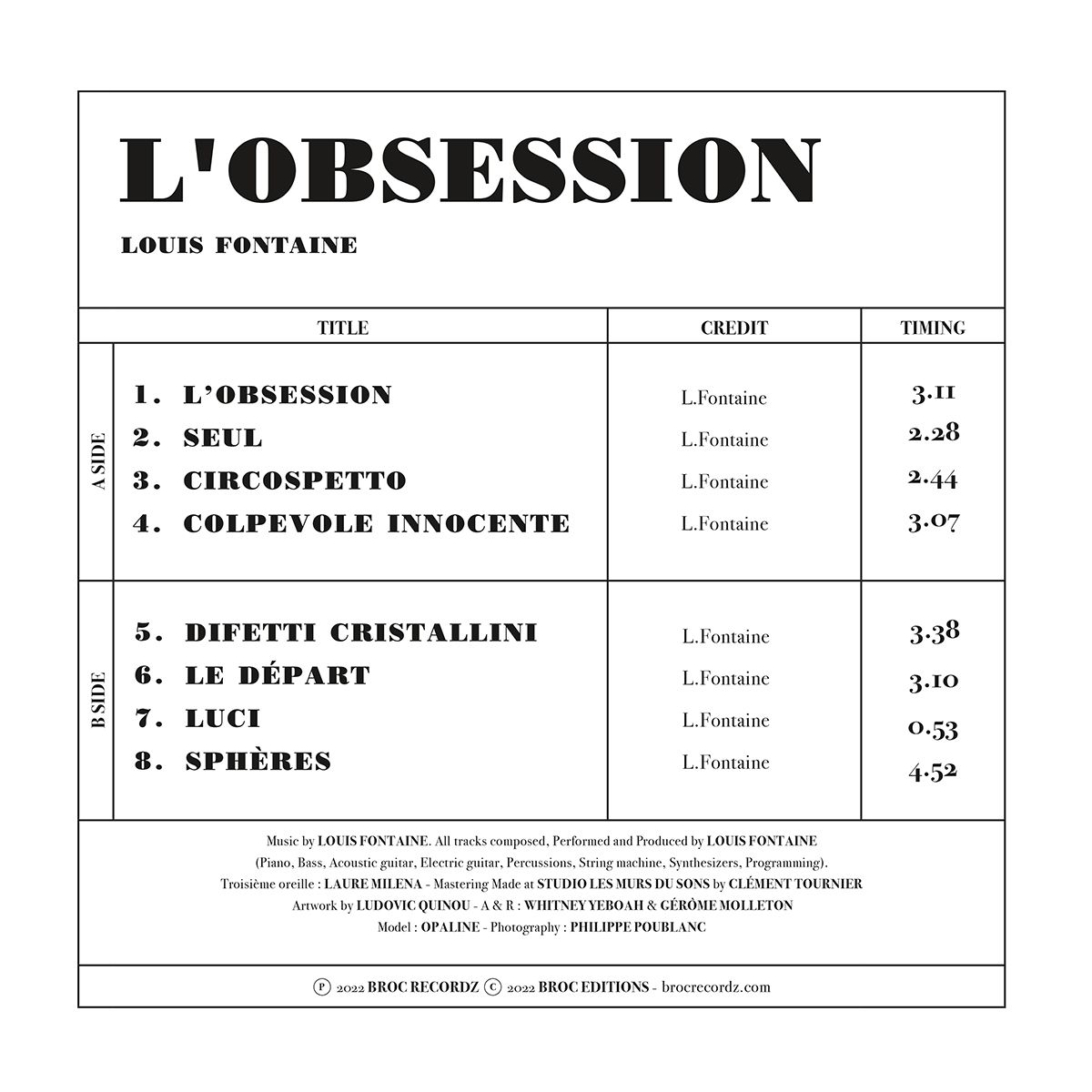 Broc Recordz presents their new release, L'Obsession by the Italian composer Louis Fontaine. The album is a fictional soundtrack, between Library music and Italian OST from the 70's in a Jazz style.

Montenegrin born in Istanbul, precocious pianist growing up in an embassy, brilliant musician. Prolific composer speaking eight languages, he arranged music for jazz, pop music, adopting multiple identities.For one label, he is Andy Loore; for another, Emiliano Orti. For others, he is called Alan Blackwell or Johnny Montevideo, but behind all these aliases, there is only one man: Janko Nilovic. Exploring the shelves of musical production, venturing into the less-illuminated corners of library music, Janko Nilovic's name lights up dozens of shelves on which his soundtracks, his records for Editions Neuilly or Sforzando, but above all his twenty albums for Editions Montparnasse, are stored. A considerable and imposing work, rich in orchestrations of keyboards, strings and brass instruments, themes, atmospheres and melodies. A repertoire in which the cinema, television and advertising have come to find their delight ... Subjected to the sharp blades of samplers, reduced to a few effective seconds, joined with rhythmic beats, some of his tracks have infiltrated hip hop for a long time , leading the most curious to go back to the source to get the complete albums from which the precious loops had been taken. Almost unknown to the general public, Janko Nilovic is a master for the initiated, whether they are at his side in the studio or comfortably seated in their armchair savouring the final result on their turntable. His discretion combined with his long years of silence on the record could lead one to believe that he had cleverly arranged his disappearance from the radar to make Janko Nilovic a mystery that has never been completely solved. Until this message from The Soul Surfers.A few miles away, in their studio fired up by analog funk, the Muscovites had been put back on the Nilovic track by multi-instrumentalist Shawn Lee. A few passionate discussions later, and the desire for a joint album was already lighting up the amps, making the bass strings shiver and the drum skins tighten. Initiated by the coming and going of scores, the collaboration finally continued in studio for a real exchange, instantly bouncing off proposals, developing ideas in a live group dynamic that distance would have made impossible. To feel the vibrations accumulated for decades at the CBE studio (like Chatelain Bisson Estardy), a mythical place founded in 1966, in which many albums, especially library, were immortalized. A place where consoles, equipment and instruments were kept as they were, accumulating in their wiring, meters and speakers, endless hours of experimentation and recording. A place that Janko knew well and where an old acquaintance was waiting for him. A Hammond organ with a Leslie booth whose keys he had already flattered in the past and behind which an improvisation and a single take were enough to complete the eponymous title. Together, Janko Nilovic and The Soul Surfers have built Maze Of Sounds, a musical labyrinth paved by the master's keyboards where the soul-funk groove of the fiery Russians is the listener's thread, his point of reference in this maze of atmospheres and emotions, at once cinematic, nostalgic, dancing, dreamlike and contemplative.An album where, however, nothing is compartmentalized. Where, blown by the whirlwind strung by a violin quintet, the barriers move preparing the entrance of a Slavic choir, letting a screaming guitar come and go alongside the crystalline liveliness of the Fender Rhodes, organize some rhythmic aerations at the disposal of the samplers.A fusion between the cleverly blackened scores, between the science of precisely written arrangements and the soul-funk feel of The Soul Surfers. An album such as Janko Nilovic has been dreaming of making for years.

Stix Records is a sub-division of Favorite Recordings, recently launched with a first official single by Taggy Matcher Birdy & Nixon (STIX033), who pleased us with two Reggae-Rocksteady renditions of the famous Black Keys.Precisely specialized in the exercise of producing covers with a Reggae twist, the new label presents his first album entitled "Disco Reggae". Many artists faithful to the stable of Favorite Recordings and its various sub-labels are invited for the occasion: The Dynamics, Blundetto, Grandmagneto, 7 Samurai, John Milk or Taggy Matcher. All came and brought their respective touch to this first compilation, with among other things some of the rarest titles from their Big Single Records’ years, but also 4 new and exclusive productions.Each of them delivers a great Disco-Reggae version of classic hits by some artists as diverse as Madonna, Herbie Hancock, Justin Timberlake, The Commodores, The O'Jays, Curtis Mayfield, Harry Nilsson or Sugarhill Gang. Whatever the genre or the period, nothing can resist their inventiveness and creativity, to the point sometimes we confuse between originals and covers. Everything is remastered and cut at Carvery Records (UK), known for their expertise in Caribbean and Disco music.

New Jersey Born Clyde Kingrap aKa The Real Fake MC is probably the freakiest MC on earth. His mum probably chose to feed him with Kurtis Blow and Afrika Bambatta’s wax instead of motherly milk, but that’s OK now, he knows how to feed himself on his own…. His Flow is definitely influenced by old school masters (Grandmaster Flash, Kurtis Blow), but the Real fake MC declares that his major influence remain in P-Funk & Gogo Funk.For more than 15 years he's been grabbing mics and spreading funky vibes on stage & in collabs all around the world. For his first solo album Clyde Kingrap aka The Real Fake MC drops us 11 of his funk tracks produced by French producer Patchworks aka Mr President. These two musicians have been dropping some tracks together for more than a decade, with always the same target: educate their love for Hip-Hop with jokin lyrics & Funk inspired beats played live with instruments.In this LP you will find tracks from his first street-tape with Patchworks, tracks from his two 12" out on Favorite Recordings, “Live & Survive” & “Hunt Ya Sunshine”, and some new exclusive joints never released before.

Keep On Hangin On …

Diggin Deeper brings the funk with a Trans-Atlantic split EP from two edit masters.Side A features Philadelphia disco don Michael The Lion, who has earned raves for his work on Soul Clap, Razor-N-Tape and Giant Cuts. His "Keep On Hangin' On" is a raw take on the classic "French touch" style - live vibraphone and bass elements to give a jolt of energy to a loft classic. With "Finally", Michael brings some nasty boogie funk with a groove that will give you the gas face.Side B showcases two tracks from Frenchman Jay Airiness, best known as half of the Parisian disco band Venice Beach. On "Funky Situation," Jay brings some oomph to a disco jazz groove that sails along. But Jay's touch is most evident on "Two of Us”, a boogie-house banger that has made its way into a lot of well-connected DJs sets recently. This 12" has four, diverse joints which can be dropped in different phases of an all-night party - a DJ's best friend!

Like an ode to your Walkman and to those 90-minute tapes that you used to rewind with your pen, DA BREAK's first LP was all about Funk & Hip Hop 90's flavors.That album immediately found itself on playlists on all your favorite radios (Radio Nova, FIP, Couleur 3, France Inter, RFI, BBC 6…), and enabled Da Break to play live in major festivals and venues (Nuits Sonores, Nuits Zebrées Nova, Radiomeuh Festival, Woodstower, Festival de Marne, Hortus Live…).This was completely unexpected, a major learning experience, and above all a lot of fun and gave the Lyon-based gang a whole lot of ideas for the next stage in their musical journey, propelling them towards new musical horizons: infectious riddims with grooving keyboard & guitar licks as their bedrock and free association leading them into jazz, broken beat, soul or disco vibes … During the creation of Let It Shine, all doors were wide open and all musical genres potentially welcome. The production still has a « home made » feel to it, like the previous album, but with a modern, sonic twist when needed- a result of three years on the road together and new creative input from group members. Whether it be on a New York summertime roof-top, or settled in a Low-Rider with some G-Funk, or moving to some phat Jamaican style bass-lines or getting sensual on a tight breakbeat, lead singer Hawa knows how to shine her feminine and versatile brilliance on the project. She gives to the songs the final touch and the emotion needed to share with us her stories about human relationships - everyday tales sharing her real life-experience.This ever-expanding musical spectrum, Da Break play with it, explore it and also let it kick completely free at times ! Song after song, they bring a magic glow to LET IT SHINE.

** Available exclusively at The Pusher **Born in a Gambian griot family, kora virtuoso and afro-fusion pioneer Jally Kebba Susso has been active in the UK music scene for twenty years. While based in London, he has tirelessly, through both personal and collective endeavours, built a singular musical identity by working hard on making the timeless Mandinka kora, an instrument he's been playing since his youth, sound like never before, combining the ancient West African strings with forward-thinking aesthetics and myriad of musicians and producers from the thriving London music scene such as Onipa, Dark Sky and Kay Suzuki.Jally Kebba Susso has already released two albums as a solo musician ("Malaye Warr", 2012 and "Banjul - London", 2017), as well as a member of the successful afro-fusion band Afriquoi, whose latest EP has garnered a very wide support, culminating in several million streams and performances on some of UK's biggest festival stages (Boomtown, Glastonbury).Freedom! A heartfelt shout expressing the newfound joy of an African musician whose working conditions, despite his long-standing roots in the London music scene, have sometimes been precarious. A newfound freedom to be able to look ahead and fully persue one's need of self-actualisation. Hence this new EP, written with the help of Jally's accomplished band members (Yuval Juba Wetzler, Nim Sadot and Oli Arlotto) and produced by Tom Excell (Onipa, Nubiyan Twist), whose 4 tracks all deal with topics (identity, homesickness, family, social justice) which are dear to Jally's heart as a Gambian native and West African musician settled in Europe.A pleasant atmospheric opener, "Wulu Doula" rides on a classic Afrobeat groove, while Jally reminds us how we are only what we become, no matter where we come from and who we inherit from. "Justice" is a stomping mandinka funk hit, in which "freedom, equal rights and justice" are claimed by Jally for all fellow artists and musicians from the West African diaspora working in Europe.Clearly anchored in Gambian music tropes and reminiscent of the pioneering mandinka fusion of Ifang Bondi, "Fakoly" tells the story of Jally's family lineage, as a member of the 74th Susso generation. As Jally puts it, "being a griot is a way of life". Homesickness can be a bitter feeling. But you can turn it around. That is exactly what Jally achieves with "Banjul", a cheerful, funky tribute to the Gambian capital, in which Jally grew up, learning words of wisdom from his elders.