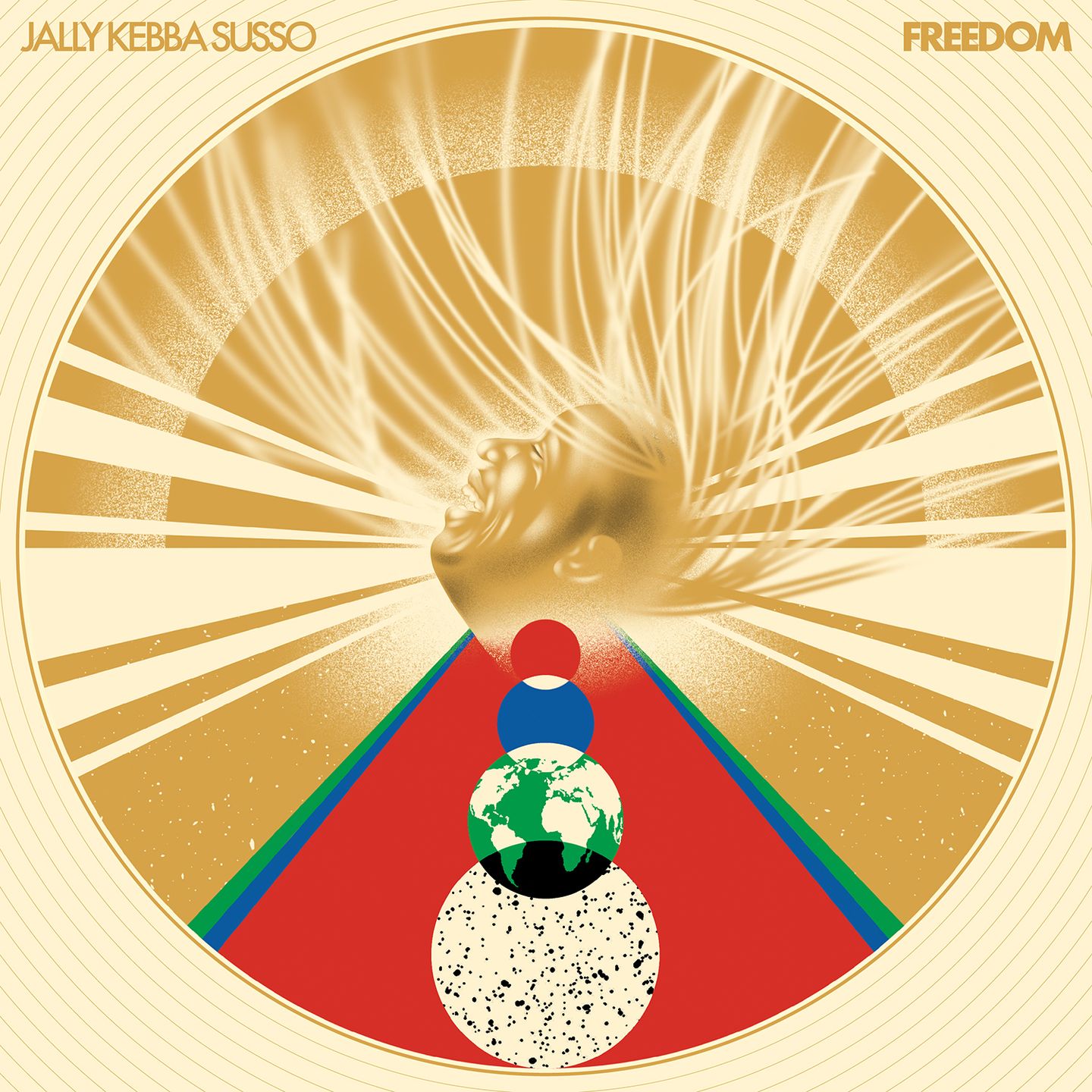 Born in a Gambian griot family, kora virtuoso and afro-fusion pioneer Jally Kebba Susso has been active in the UK music scene for twenty years. While based in London, he has tirelessly, through both personal and collective endeavours, built a singular musical identity by working hard on making the timeless Mandinka kora, an instrument he's been playing since his youth, sound like never before, combining the ancient West African strings with forward-thinking aesthetics and myriad of musicians and producers from the thriving London music scene such as Onipa, Dark Sky and Kay Suzuki.

Jally Kebba Susso has already released two albums as a solo musician ("Malaye Warr", 2012 and "Banjul - London", 2017), as well as a member of the successful afro-fusion band Afriquoi, whose latest EP has garnered a very wide support, culminating in several million streams and performances on some of UK's biggest festival stages (Boomtown, Glastonbury).

Freedom! A heartfelt shout expressing the newfound joy of an African musician whose working conditions, despite his long-standing roots in the London music scene, have sometimes been precarious.
A newfound freedom to be able to look ahead and fully persue one's need of self-actualisation. Hence this new EP, written with the help of Jally's accomplished band members (Yuval Juba Wetzler, Nim Sadot and Oli Arlotto) and produced by Tom Excell (Onipa, Nubiyan Twist), whose 4 tracks all deal with topics (identity, homesickness, family, social justice) which are dear to Jally's heart as a Gambian native and West African musician settled in Europe.

A pleasant atmospheric opener, "Wulu Doula" rides on a classic Afrobeat groove, while Jally reminds us how we are only what we become, no matter where we come from and who we inherit from.
"Justice" is a stomping mandinka funk hit, in which "freedom, equal rights and justice" are claimed by Jally for all fellow artists and musicians from the West African diaspora working in Europe.

Clearly anchored in Gambian music tropes and reminiscent of the pioneering mandinka fusion of Ifang Bondi, "Fakoly" tells the story of Jally's family lineage, as a member of the 74th Susso generation. As Jally puts it, "being a griot is a way of life".
Homesickness can be a bitter feeling. But you can turn it around. That is exactly what Jally achieves with "Banjul", a cheerful, funky tribute to the Gambian capital, in which Jally grew up, learning words of wisdom from his elders.

** Not available for Italy & UK **Edizioni Ishtar and Schema Records proudly celebrate the 15th anniversary of one of their most successful releases and artists (more than 30 million streams and 300 thousand monthly listeners on Spotify) with the first ever vinyl edition of Toco’s Outro Lugar. Produced by S-Tone Inc., this record includes fan-favourite tracks “Outro Lugar”, “Samba Noir” and most of all “Guarapiranga”, which was chosen for the soundtrack of “Silver Linings Playbook”, a film that awarded Jennifer Lawrence an Academy Award prize as best actress in a leading role in 2013. The strings at the beginning of the title-track have also been sampled by PinkPantheress for her song “Nineteen”, out of her latest album “To Hell With It”. Outro Lugar hasn’t aged a bit during all these years, for various reasons; first of all it benefits from the outstanding contribution of bossa nova pioneer and inspiration source Roberto Menescal, who played guitar in every track. Most of the album was recorded in Rio De Janeiro at Menescal’s studio, with the participation of some of the best ‘carioca’ musicians, especially double-bass player Adriano Giffoni and pianist Adriano Souza. All these elements gave the album exactly the taste requested by the artist and the producer: inspired from the past yet, through thorough attention, aimed at a sound at the same time fresh and modern, slightly electronic, filled with grooves perfectly blending into acoustic instruments. The second part of the recording was carried out in Milan, with some of the best musicians in the Milanese jazz scene.The album also sees the contribution of Rosalia De Souza, singing in several tracks and standing out in “Bom Motivo” especially. French chanteuse Coralie Clément appears in “Contradição”, her own piece here re-interpreted by Toco.Outro Lugar is an album for any kinds of Brazilian music lovers that showed the world what Toco was capable of: a refined and cultured musician, a gifted performer of a warm and smooth voice able to awaken the emotions of the most sensitive listeners.

Mr Day is also known as the singer of French combo Metropolitan Jazz Affair, the main singer in The Dynamics, for his House-Soul records released on indie label Rotax, as well as his superb guest vocals on productions by Boozoo Bajou, Patchworks and Mr President! "Small Fry" evokes classic soul music, from Curtis Mayfield to Motown, and from northern soul to west coast, without being a specific genre album. The musical style is vast and replete, but the composition and production manage to never fall prey to shortcuts or repetitiveness.

The Music From Africa series comprises two volumes of never-heard South African library music from the early '80s. They were recorded and produced by Johannesburg musician/producer Tom Mkhize and released then on vinyl only to be sent to TV and radio stations, as well as cinema productions (never commercially available). Traditional South African rhythms re-imagined, dubbed-out and disco-fied by this legendary producer! Each side of each volume is an A-Side of the original LP's, the B-Sides were only 10/15 seconds loops of the tracks from A-Sides designed as radio jingles and there was no interest in keeping them for the reissues.

Two Tales For The Mind Vol. 1…