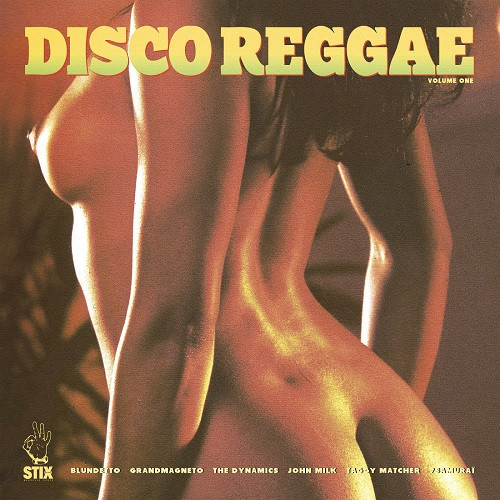 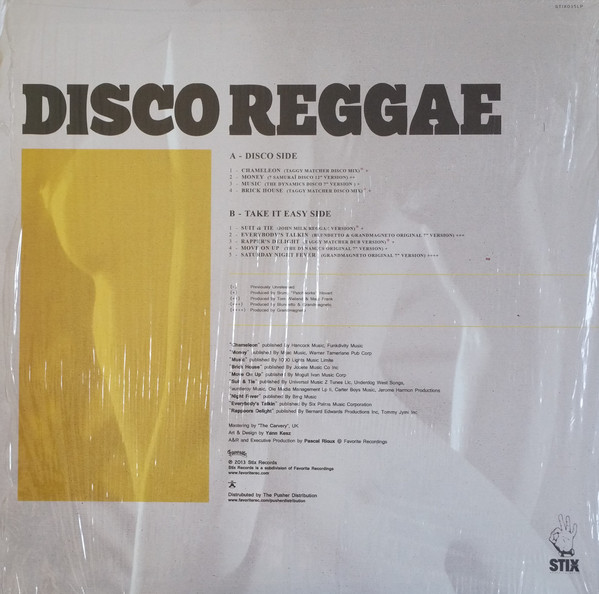 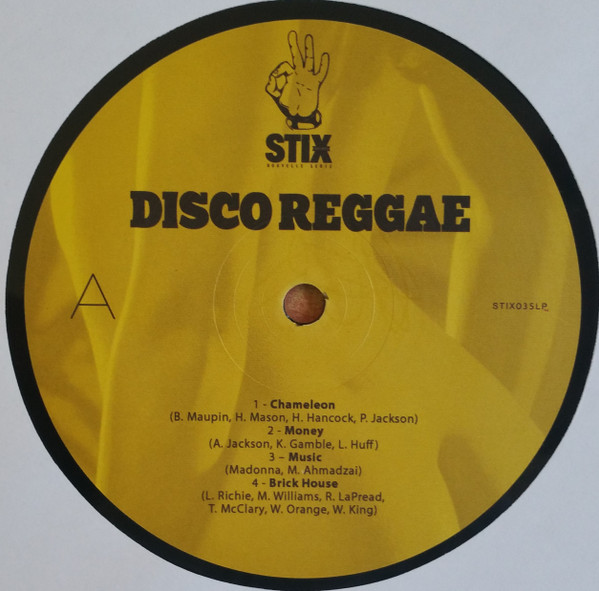 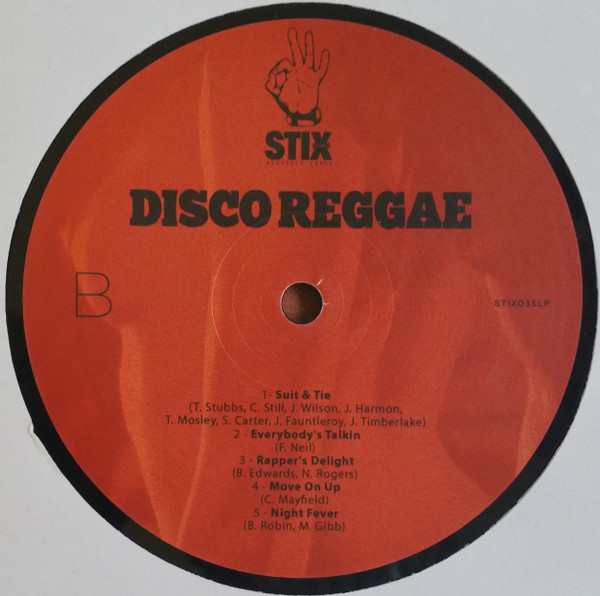 Stix Records is a sub-division of Favorite Recordings, recently launched with a first official single by Taggy Matcher Birdy & Nixon (STIX033), who pleased us with two Reggae-Rocksteady renditions of the famous Black Keys.

Precisely specialized in the exercise of producing covers with a Reggae twist, the new label presents his first album entitled "Disco Reggae". Many artists faithful to the stable of Favorite Recordings and its various sub-labels are invited for the occasion: The Dynamics, Blundetto, Grandmagneto, 7 Samurai, John Milk or Taggy Matcher. All came and brought their respective touch to this first compilation, with among other things some of the rarest titles from their Big Single Records’ years, but also 4 new and exclusive productions.

Each of them delivers a great Disco-Reggae version of classic hits by some artists as diverse as Madonna, Herbie Hancock, Justin Timberlake, The Commodores, The O'Jays, Curtis Mayfield, Harry Nilsson or Sugarhill Gang. Whatever the genre or the period, nothing can resist their inventiveness and creativity, to the point sometimes we confuse between originals and covers. Everything is remastered and cut at Carvery Records (UK), known for their expertise in Caribbean and Disco music.

To enter the world of Sally Townes and Roberta Vandervort is to be swept away into a dimension of unique sound. Embellishments of smoldering jazz funk, seductive soft rock, breezy AOR, and misty folk, all paint a picture of the worlds which they inhabited; from the endless flat expanse of Dallas, the hot and humid bustle of a Bourbon Street night club, to the late night buzz of a Los Angeles studio session.While Sally Townes and Roberta Vandervort never crossed paths in our reality, their supernatural union on this compilation feels like the meeting of old, yet familiar friends, set in a parallel dimension with lives intertwined. The songs feel like old friends, too — a comforting time capsule of the popular sounds of the era, yet offering something completely new. Bridged by the striking similarities in their musical confidence, vocal conviction, and boundless creativity, both women encapsulate an uncompromising passion for living, loving, and creating on their own terms.

In the beginning of the 1970’s, Guinea-Bissau was a country broken up into many ethnic groups and at the heart of a war for independence. By reviving traditional musical genres as Gumbé and singing in guinean Kriol, José Carlos Schwarz & Cobiana Djazz established an immediate affective bond with their audiences. Through its music and politically engaged spirit of the lyrics, the band played a significant role in shaping the social and political consciousness of the masses. As well as influencing local bands like Super Mama Djombo and giving back a deep sense of cultural identity to bissau-guineans.The explosive birth of Cobiana Djazz brought about other kinds of detonation. Schwarz became involved in urban guerilla activities which resulted in several bombings in the centre of Bissau, leading to his imprisonment and torture. He remained in lockup for a total period of about 2 years, between 1972 and 1974. The process of decolonisation, in the wake of the Portuguese revolution of 25 April 1974, led to the recognition, during the same year, of the sovereign nation of Guinea-Bissau. Schwarz, a key figure in the fight for independence, played an important part in the transition to the democratic regime, profiting from his popularity as an artist. Soon, his criticism (underscoring opportunism and irresponsibility in high places) became a thorn in the side of the political elite. Uneasy with the disquieting effects of his work, government officials effectively separated the author from the masses by assigning him to the embassy in Havana.José Carlos Schwarz met a tragic and untimely death at the age of 27, when his plane crashed on arrival at Cuba's José Martí International Airport, on May 271th 1977.Hailed by african giants like Orchestra Baobab, Letta Mbulu or Miriam Makeba (with whom he recorded his first and only solo album), “Zé Carlos” and his poetry won a lasting position in the annals of Guinea-Bissau. However, this collection of songs remains relatively unknown outside the country and its diasporas.We are proud to offer, in close collaboration with the Schwarz family, this first official reissue on vinyl. Remastered and pressed on heavyweight vinyl.

Split Single from the garage combo of The Panturas and Sundancer sung entirely on their regional language. An exclusive 7” split from Indonesian surf-garage-rock behemoth The Panturas and Sundancer, hailing from Jatinangor and Lombok Respectively. It was the first series from their upcoming “"Singel Klub" series."Lasut Nyanggut" by The Panturas their first song sung entirely in Sundanese language. The band appointed Ricky Virgana from White Shoes and The Couples Company fame to be their producer, and successfully produced a garage psych-surf-calypso with a mixture of traditional oriental sundanese pop aesthetics. The lyrics of the song itself paints a picture of someone fishing.The title itself is a popular term among fishing enthusiast on the western parts of Java.“Dedare Tanjung” or “Gadis Tanjung” roughly translates to “the girl on the cape”, was inspired from “Dark Eyes” a russian folk song and Ismail Marzuki’s very own “Panon Hideung” which is a song sung in Sundanese language. The band translates the song to their own mother tongue language which is the Sasak, a language that the band originated from.

Following the mighty rendition of "I Want You", Soul Sugar (a.k.a. Guillaume 'Gee' Metenier) is back with another massive Soul-Reggae version, this time taking on Luther Vandross' "Never Too Much". Fearlessly taking on such timeless classics is serious business, and Leo Carmichael delivers, once again, with a maximum dosage of finesse and feeling. Seductively delicate backing vocals from Carl Lee Sharshmidt and Karene Brown keep it as warm and intimate as one would hope, while Thomas Naim's tasteful guitar licks and Gee's minimal production allow the song to breathe and flow steadily on its own.Recorded in Paris, Kingston, Miami and London, the resulting blend of Soul and Reggae riddims has rarely felt so natural. On the A-side, Gee's "Discomix" dubs a generous dose of the sultry backing vocals over a minimal, bassy groove that dips, dives and flows on into the sunset. UK producer Adam Prescott lets loose with an infectious 90's dancehall rerub, aiming straight for the dancefloor... ladies' choice! Finally rhythm legends Sly & Robbie drop the BASS with a heavy dancehall treatment, taking it low, letting it ride, while the vocals float on... Never Too Much!

Joseph White aka Joe White is a foundation of Jamaican music. He started singing in the late 50's and did his first recordings for Duke Reid in the early 60's. He moved to Sonia Pottinger's label later and get a first success in 1965 with the song « Every Night ». He also recorded for Prince Buster, Coxsone Dodd and Rupie Edwards. In the 70's, Joe White was one of the only melodica player in Jamaica with Augustus Pablo, Peter Tosh and Bobby Kalphat. He released beautiful melodica instrumentals like « Kenyata », « Call Me Trinity » for Derrick Harriott and « Cheer Up » for Glen Brown. Joe White was also a member of the famous BB Seaton's backing/studio band « The Conscious Minds ». In the mid seventies, he moved to London and released his classic album « Love For Every Family ».Joe White formed the group Roots, Trunks & Branches to release several tracks on the label Splendour Heights. “Forward To Zion” was released in 1979 and became a truly reggae roots stepper banger for sound system across the globe. Probably electronic music fans will appreciate the futuristic dubwise. “Forward To Zion” is a song of peace, love, freedom and emancipation of people. Uplift your selection, listen to the words of the prophet, it's time for us to get together; we are going forward to Zion. Jah don't care whether you are a natty dread or you're a baldhead, just as long as we unite and stop the fight, we are going forward to Zion!