The Rickie Clark Company
Time To Throw Down 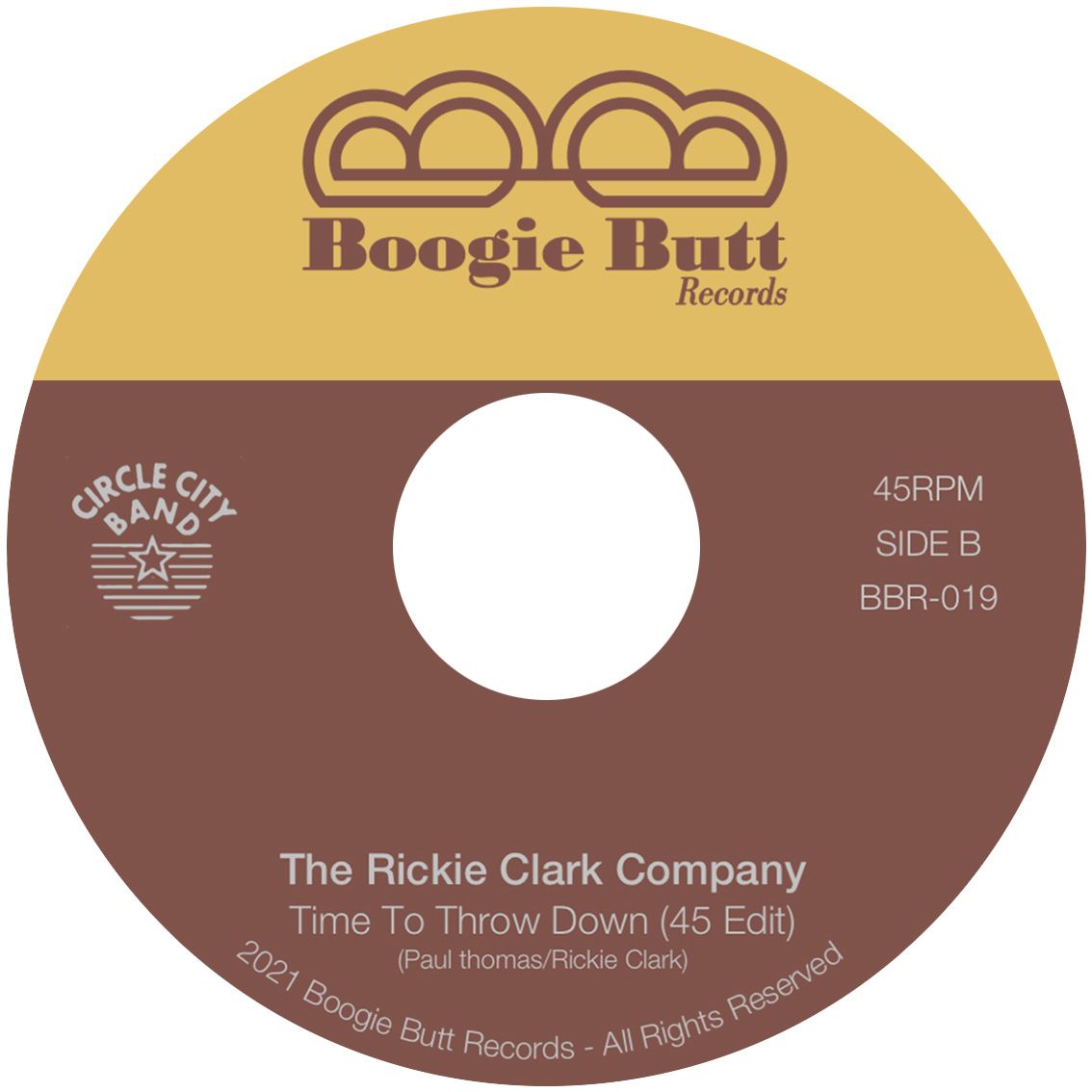 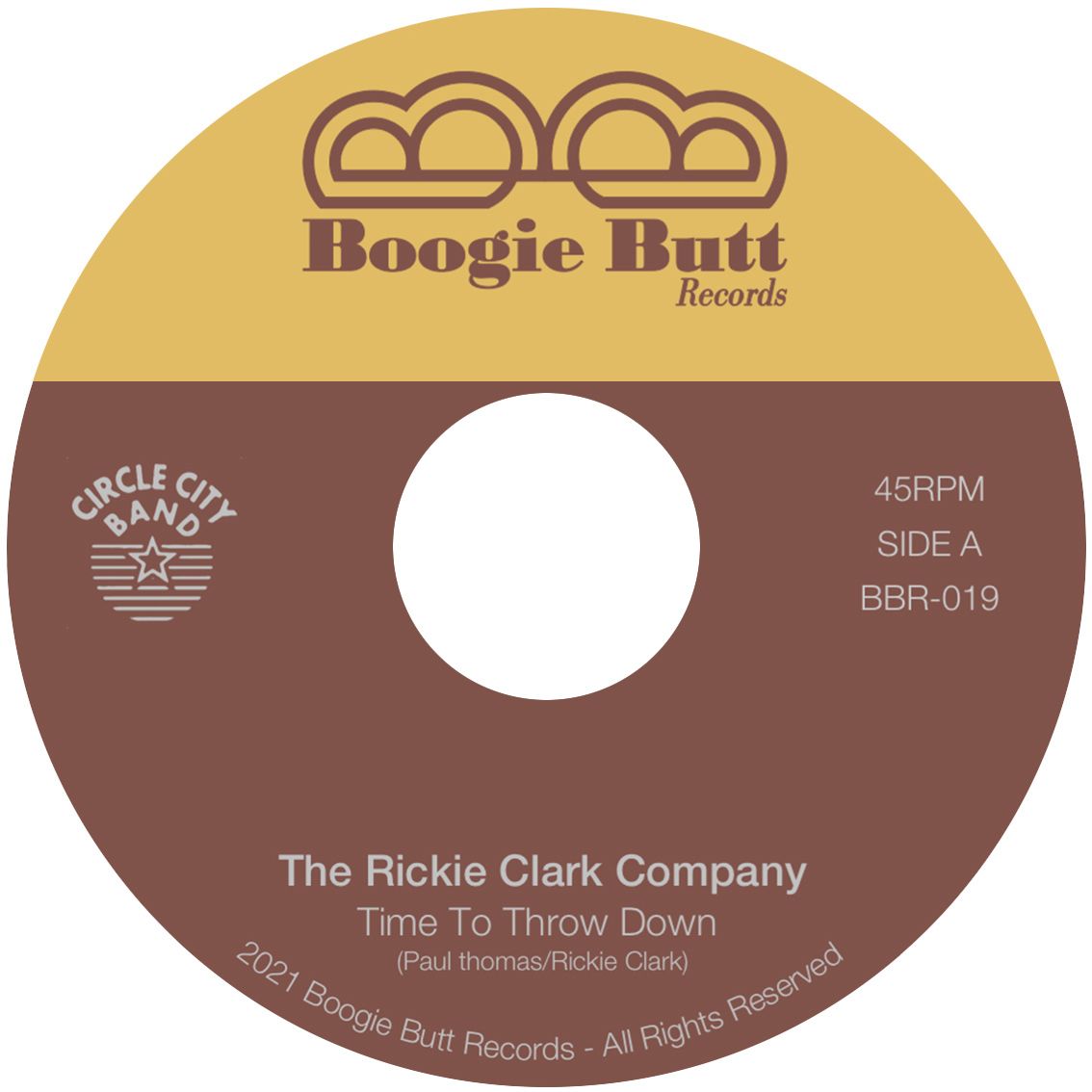 Boogie Butt Records presents its new reissue. Originally Released in 1983 on Becket Records, Time To Throw Down, is a party banger, between P.Funk & Boogie, created by the one & only Paul Thomas, founder of the "Magic Crew", The Circle City Band. Bandleader Paul Thomas had produced three 12" single's released under the title Circle City Band in 1983-84, one of those records titled Magic became extremely popular in the mid1980's, but this record was supposed to be the 4th 12inch single on Becket Records.

At the same time in 1983, when Reggie Griffin and Paul Thomas was mixing this instrumental track in L.A, the reverend "Rickie Clark" originally from "Circle City" in Indianapolis, came to see them hearing what there was doing, and fall in love with this track, asking if he could used it for himself .

The "Circle City Band" (CCB) is made up of eight remarkably talented souls. The band is lead and managed by founder, producer/musician/singer/songwriter Paul Thomas otherwise known as "P" aka the "Funky Skunk" and also features long time friends and mentors, including the legendary award-winning, multi-musician/songwriter/producer Reggie “Mr. Everything” Griffin of Tech-No-Funk fame.

Time To Throw Down

** Available exclusively at The Pusher **Stix Records, a sub-label of Favorite Recordings, proudly presents Jazz-Funk Dub Tribute, a new project by Mato with exclusive Dub versions of some of the most famous Jazz-Funk, Soul-Jazz, Funk & Fusion tracks. After the amazing success of his Summer Madness / Maiden Voyage (2021) single, respectively covering Kool & The Gang and Herbie Hancock, Mato got deeper within the American Black Music repertoire. He worked on tracks that can be considered as serious classics of the Jazz-Funk scene. We all remember the melodies from Eddie Henderson ("Inside You"), WAR ("The World Is A Ghetto"), Weather Report ("Black Market"), Deodato ("Caravan"), Grover Washington Jr. ("Loran's Dance"), Barry White's Love Unlimited Orchestra ("Midnight Groove"), Herbie Hancock ("Maiden Voyage"), The Meters ("Cissy Strut") or Lonnie Liston Smith ("Visions Of A New World"). Imagine them reworked and tailored by the French dub master. Needless to say, Mato, who’s playing most instruments and synthesizers, did a fantastic job and you’ll be blown when hearing these versions. Starting his reggae production career in 2006, Thomas Blanchot (aka Mato) has released music through various projects on EDR Records, Big Singles or Makasound... In the meantime, he developed a real trademark: taking over classic French, Hip-Hop, OST, Classical or Pop songs, into roots reggae-dub new versions. Besides, since 2010, Mato has built a solid reputation thanks to his hot remixes of Hip-Hop classics on Stix Records. Last year he also released Scary Dub, which focused on scary movies' soundtracks.

Paint A Picture are incredibly pleased to announce news of their first release: a fully remastered, licensed reissue of rediscovered British 7” Funny Situation recorded by Reflex - a band put together by drummer David Humphrey (Public Image Ltd., Sparks, Mike Oldfield) and privately released on his Star Records back in 1981. With the original record now changing hands for in excess of £200 and just in time for a 40th anniversary release the reissue - remastered and cut by Frank Merritt at The Carvery - will include updated original artwork whilst also containing an insert providing further details and context on the release.Recorded a few months after seminal Britfunk tune "Southern Freeez" at the very same Vine Yard Studios and with the same engineer Simon Sullivan - the release unfortunately suffered from a lack of marketing and proper distribution but almost forty years later the record is now receiving the attention it deserves and with a price tag to match. The A side presents a beautiful mesh of funk and soul styles with influence from other Britfunk bands of the time but with a more overt jazz and rock feel fusing a tight rhythm section with smooth vocals and climaxing in a guitar and saxophone duel.The instrumental Version Two provides a fresh approach with the addition of dub FX and Indian percussion with the use of a tabla added to the mix.

Trevor & Lisa, the Parisian Funk band, is back!L.A. Nights, their new EP on Hi & Fly is a new milestone in the band discography, setting it to a next level. The title track is a cover of the famous Yasuko Agawa’s track (itself based on Light of the world’s “London Town”) inspired by strong Zapp and West-Coast influences. Fat basslines, tight horn riffs and funky talkbox parts galore!“Break Droppin’” and “The Battle” are infectious medleys played by the band with an extended line-up including extra brass, strings and percussions. In “Breaks Droppin’”, you’ll find a carefully selected mix of cuts, ranging from the Hawaiian Hal Bradbury’s “You win, I Lose”, to Julius Brockington’s “This Feeling (Freedom)”, passing through CTI and other sampler friendly tracks.“The Battle” is a b-boy style up-tempo selection, mixing Latin influences with some classic battle cuts and evolving to a Disco finish, with a cover of the great Brothers’ break “Under the Skin”. It is 10’ long, the beats & percussions are heavy and the extended band is in top condition. It won’t let some rest to your feet for sure!Last but not least, it's also the comeback of Hi & Fly, a French diggers' reference since 2000. So, one reason more to have a listen… Enjoy!

Born from a French mother and a father with a Burkina bé/Senegalese dual nationality, Jennifer Zonou aKa Hawa has been rocked in music from an early age. As a DJ addicted to all kind of grooves, her father passed on his genuine love and great vinyls collection of Rap, Soul, Funk, Jazz, Afrobeat, or Reggae music. While her mother, keen on American Folk and Pop, gave her awareness and sensibility for the beautiful melodies and songwriting of artists such as Rickie Lee Jones.Yet it was not until 2000 that Jennifer began her singing career. A native of Macon (near Lyon, France), it was after she met with IPM, a Hip-Hop group from Lyon, that she gained confidence in her skills and decided to start within the best schools possible: Gospel. Thus she joined the choir called “Héritage Soul” (Soul Legacy), where she connected with Raphael Chambouvet, keyboard in the choir and in many projects of the Lyon’s music scene such as CHK, or later Mr Day. At that time, her voice could be spoted on many Hip-Hop projects from Lyon, including Dialect Music, Casus Belli and therefore IPM, but it’s only when she entered a new choir, "Precious Voices," that Jen took another turn in her carreer. She then rised in a Nu-Soul duo act called Ebony Source, whose album will certainly never be released, but which will allow her to tour seriously and to open for top French artists such as Diam's or Wallen, but also for international names such as Lizz McComb. Jennifer then begins to work solo with her old mate Raph, who has since continued to play in bands such as Mr Day and who quickly liaised her with Favorite Recordings label (Dynamics Onra, The Funk League Solomko Andre, ...) and his founder Pascal Rioux. A new Hawa was born, raising the challenge of writing in English with surprising ease. Very soon the first demos come alive, including "Sweet Lucky Day", wich will later be found as the B-side of her first single "DANCE ", released in 2009. In the meantime, she also meets with Bruno "Patchworks" Howart (Metropolitan Jazz Affair, Uptown Funk Empire, Mr Day, Mr President, ...) at a concert in Lyon in 2008. International reknown within the indy Soul/Funk music scene, Patchworks is immediately attracted and offers to produce her some songs. Coming next is a first acclaimed 7inch mentioned above and several appearances alongside Mr Day and Mr President, then naturally followed by the common desire to sail further. The result is called ‘My Little Green Box’, first album by Hawa due for release on June 6th 2011 on Favorite Recordings. Mainly produced by Patchworks, MLGB is naturally imbued with the Soul/Funk touch which made his success and fame. But the album is also deeply led by Jennifer’s eclectic influences, and each of its 11 songs is the result of a true joint effort between her, Bruno, and Raph on some tracks like "Full of Love." Above all, this mysterious “green box" contains 11 great groovy nuggets and reveals a fully uninhibited Hawa. She impresses first thanks to a natural musicality gained through her years of Gospel, but also makes her own imprint with an approach to writing and rhythm very inspired by her long passion for Rap. In the wake of the Queen Sharon Jones and all her Soul daughters such as Nicolle Willis or Giselle Smith, Hawa could well find her place in the circle of the international top Soul Sista, thanks to this first attempt without a fault. Now we hope you’ll feel the same!!