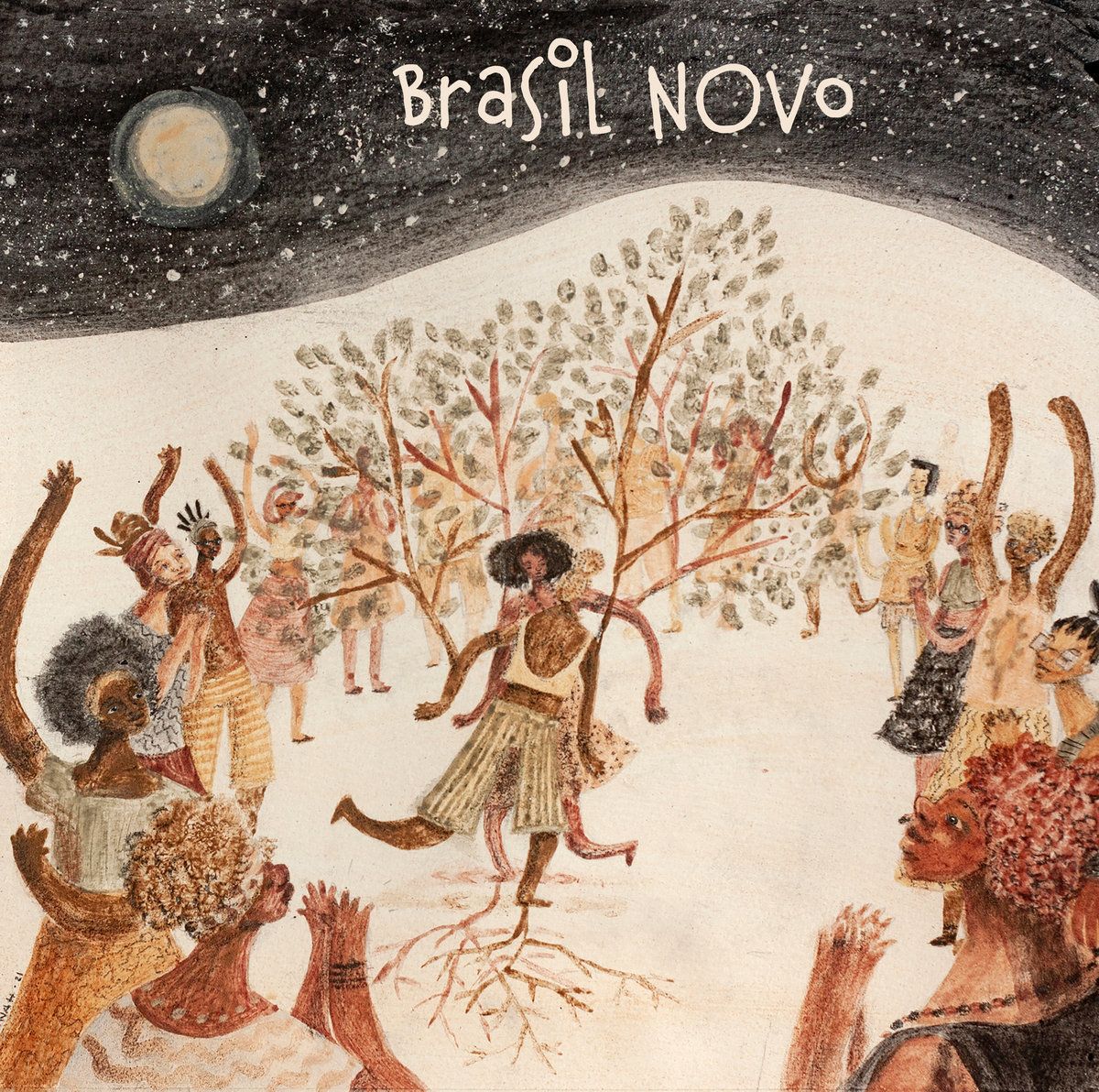 UK label Musica Macondo place their focus on contemporary Brazilian and African diaspora on Brasil Novo, an eight track compilation of discovery, snare and tamborim heavy, showcasing both celebrated and unfamiliar artists south of the equator from the cities of Recife, Rio De Janeiro and Sao Paulo.
With the aim of presenting and thus preserving these moments in music - some tracks like Dona Celia's O Bar and Toró Instrumental's Dunas never been released before - DJs and co-curators Tahira (Sao Paulo) and Tim Garcia (London) dig deep into the troves, avoiding mainstream Brazilian popular music cliches, and also giving a sense of what fuels their dancefloors and radio sets. It was their joint passion for record collecting, Djing and 'the dance' which not surprisingly, brought these two leading figures within their respective scenes and cities together. The selection also includes tracks by Grupo Bongar, Renata Rosa and women's Afro Bloco, Ilú Obá De Min.

DJ Tahira is a massive Brazilian music fan and has been on a research journey for a number of years, dedicated to the preservation and archiving of music made or influenced by black and indigenous Brazilians. Based out of Sao Paulo he has a particular interest in the history of Samba de Coco, a folkloric musical form that was very popular in, (and probably originated from), the north east of Brazil, by slaves and indiginous people from working class backgrounds who came together, making a rhythmical mesh of sounds dating back hundreds of years and allowing them to carve a unique cultural identity.
Ignored or disregarded as inferior by Brazil's predominantly white faced recording industry, there are few existing original recordings of this music from the twentieth century, relying instead on oral tradition and carnivals like those in Recife or Pernambuco. In recent times there has been a flux of contemporary proponents who mix Samba de Coco with other contemporary Brazilian musical forms. Brasil Novo features both the roots, and more divergent fusions.
Perhaps the best example of the Samba De Coco of old is from Dona Celia Coquista or Dona Celia do Coco as some people called her. She was a singer from Pernambuco who released only one album Nasci Com Dois Dentes in 2007 despite being an enormously important proponent of Samba De Coco for many years. She sadly passed 4 years later in 2011. The track O Bar features a plethora of local and native percussion instruments and a call and answer harmony of uplifting choir, a cacophony of positivity.
Other contemporary artists featured, who mix Samba De Coco in their repertoire whilst reinventing Brazilian folkloric music, are Renata Rosa and Grupo Bongar. The former is a female singer, songwriter and rabeca player with roots from the north east of Brazil. Grupo Bongar, well known in Brazil and internationally, combines all manners of Brazilian folk, axé and samba and also runs a centre for percussion aimed at galvanising musicians from disadvantaged backgrounds.
Another all female act on the Brasil Novo line up are Afro Bloco group Ilú Obá De Min, who have been part of Sao Paulo carnaval for many years. As well as making swinging, percussion based tunes, they support the empowerment of black women through workshops and promote all aspects of Afro Brazilian culture. Perhaps the outlier of the album, and one that borrows a sound from that Herbie Hancock electronic jazz era of the ‘80s are the now defunct Toró Instrumental, whose song Dunas is a live version, full of Brazilian percussion, disco-tinged, previously unreleased and is a sure-fire party starter.

In the current cultural impasse that Brazil is experiencing, with artists and musicians experiencing the withdrawal of funding and services and with concerts and clubs yet to get back to pre-pandemic levels, it's never been so important to give visibility to contemporary creativity. This compilation not only gives a needy international platform to new artists, it enables an archive of Afro Brazilian culture that in some cases is disappearing. It’s also a fine example of resistance and positivity, against the odds.

Everybody's Talkin / Echoes Of My Mind…

Feel So Good Inside…

Favorite Recordings proudly presents this new official single reissue of “Feel So Good Inside”, by Lamar Thomas. A killer deep-disco and very rare collectable single, fully coordinated for reissue by French respected DJ and Tropical rare-groove specialist, Waxist Selecta.Lamar Thomas is an American singer, composer and producer who made a short solo career in the 70s, and then formed the duo Thomas & Taylor. He has also penned few songs for Johnny Bristol, Garland Green, Nancy Wilson, Maynard Ferguson, or Johnnie Taylor among others.In 1980, he recorded this 2 tracks single for MCA Records, who released it on a 7inch left almost unnoticed at that time. 30 years later, this brilliant disco production has become a classic rare-groove title for a few DJs and diggers, with among them, French collector and DJ, Waxist Selecta (aKa Julien Minarro). Schooled about this rarity by DJ Klas (aKa Josh Goldman), he then made it a real favorite in his various DJ sets. Curious to learn more about this forgotten piece, he also liaised with Lamar through the web, and discovered that all the masters had burned in a California fire at Universal.As Julien already worked on an upcoming reissue project with Pascal Rioux and Favorite Recordings (more details in 2015), he offered him and Lamar to arrange a proper official reissue and produce a new master from his own vinyl copy. Coming out in a 12inch version built for dancefloors, the package also includes a great extended mix by Waxist.

Hi-Life & Afro-Funk essential from Ghana! The legendary K. Frimpong's fantastic rare second album recorded in 1975 at Ghana Films Studio. K .Frimpong was born on July 22nd 1939 at Ofoase in the Ashanti-Akim district and entered right into music after elementary school by joining "Star de Republic" and later “Oko's Band” after which he left to K. Gyasy's band where he worked for more than 6 years.As a prolific songwriter and singer, here's the reissue of his 2nd album, a modern fusion of Hi-life and the traditional beat called "Ahyewa".The excellent background is given by the Super Complex Sounds band which makes the Ahyewa beat abundantly, dancable, and colourful.Originally produced on “Ofo Bros”, label of the Ofori brothers in Kumasi, this two long sides recording were divided in 6 themes each sides, and make a deep 16 minutes long hi-life trance.A must have vinyl of percussive Afro-Funk & modern Hi-life for all the music connoisseurs. Remastered by Frank Merritt at The Carvery / Pressed on Deluxe Replika format / Fully licensed to the Alhadji Kwame Frimpong Family

Favorite Recordings proudly presents Voiciii, the 3rd and new album by Voilaaa, an immersive dip into its Afro-Disco universe spread across 14 tracks. Needless to say you’ll find in this new LP all the ingredients that made him famous: strong dancefloor-friendly festive bangers, irresistible funky arrangements and an undeniable sense of humor and irony. Bruno “Patchworks” Hovart, behind Voilaaa, is as often surrounded by amazing vocal featurings from previous LP’s regulars (Pat Kalla, Lass) but also new voices you may already have heard on its recent EPs (David Walters, Rama Traore, Ayuune Suule), as well as the saxophonist Boris Pokora. The LP is also an occasion to pay tributes to major artists of the African sound, such as Fela Kuti (on “Water No Get Enemy”), or Manu Dibango (“Manu Écoute Ça” and “Tenor Jam For Manu”). Since the release of Voilaaa’s previous LP’s Des Promesses and On Te L’Avait Dit and their massive international support, the Voilaaa Soundsystem did travel through the world to deliver its message of infectious joy and groove, from Equator to Thailand, from Kazakhstan to the infamous French “Fête de l’Huma”. Now you know: Voilaaa is everywhere and Voiciii (“here it is”) their new album.

Mr Day is also known as the singer of French combo Metropolitan Jazz Affair, the main singer in The Dynamics, for his House-Soul records released on indie label Rotax, as well as his superb guest vocals on productions by Boozoo Bajou, Patchworks and Mr President! "Small Fry" evokes classic soul music, from Curtis Mayfield to Motown, and from northern soul to west coast, without being a specific genre album. The musical style is vast and replete, but the composition and production manage to never fall prey to shortcuts or repetitiveness.

Stand Up To It / Guiding Star …

Ark Angel Jah Mel is a recording artist, songwriter and musician from Jamaica. Beginning his career as a performer on the stage shows of the Twelve Tribes Of Israel of which he has been a member since his youth, Jah Mel made his debut sharing the stage with artists such as Dennis Brown, Bob Marley, Freddie McGregor, Sugar Minott, Brigadier Jerry & Denroy Morgan. His writing credits include songs written for Marcia Griffiths, Cecile, DaVille, Itana & Jah Mali, for whom he also produced tracks on his debut album El Shaddai. Jah Mel has worked with all of Jamaica’s top producers & musician in Jamaica such as the great Sly & Robbie, Steely & Cleevie, Earl Chinna Smith, Steve ‘Lenky’ Marsden & Donovan Germaine to who’s Penthouse label Jahmel was signed.Jah Mel sees himself as a musical bridge between the original reggae sound & the dancehall sound of today, representing what he calls the real dancehall revolution, merging the spirituality of the old school & the energy of the new school. “Guiding Star” and “Stand Up To It” are the perfect examples to overstand this definition. Both song were produced by Roydale Anderson aka Andy's. “Guding Star” will definitely give you thrills if you are into deep synth and heavy digital rhythm while the superb piano notes will warm you in the analog style. Beware of “Guiding Star” dub version called “Guidance (Dance Mix)” that will break any bunker. “Stand Up To It” rhythm is an adaptation of one of the most classic Jamaican riddim called “Heavenless”. You will never know this riddim like before; This version takes the riddim to another level. A positive song with a bionic nuclear bomb dubwise! Play it loud, Jah is our guiding star!