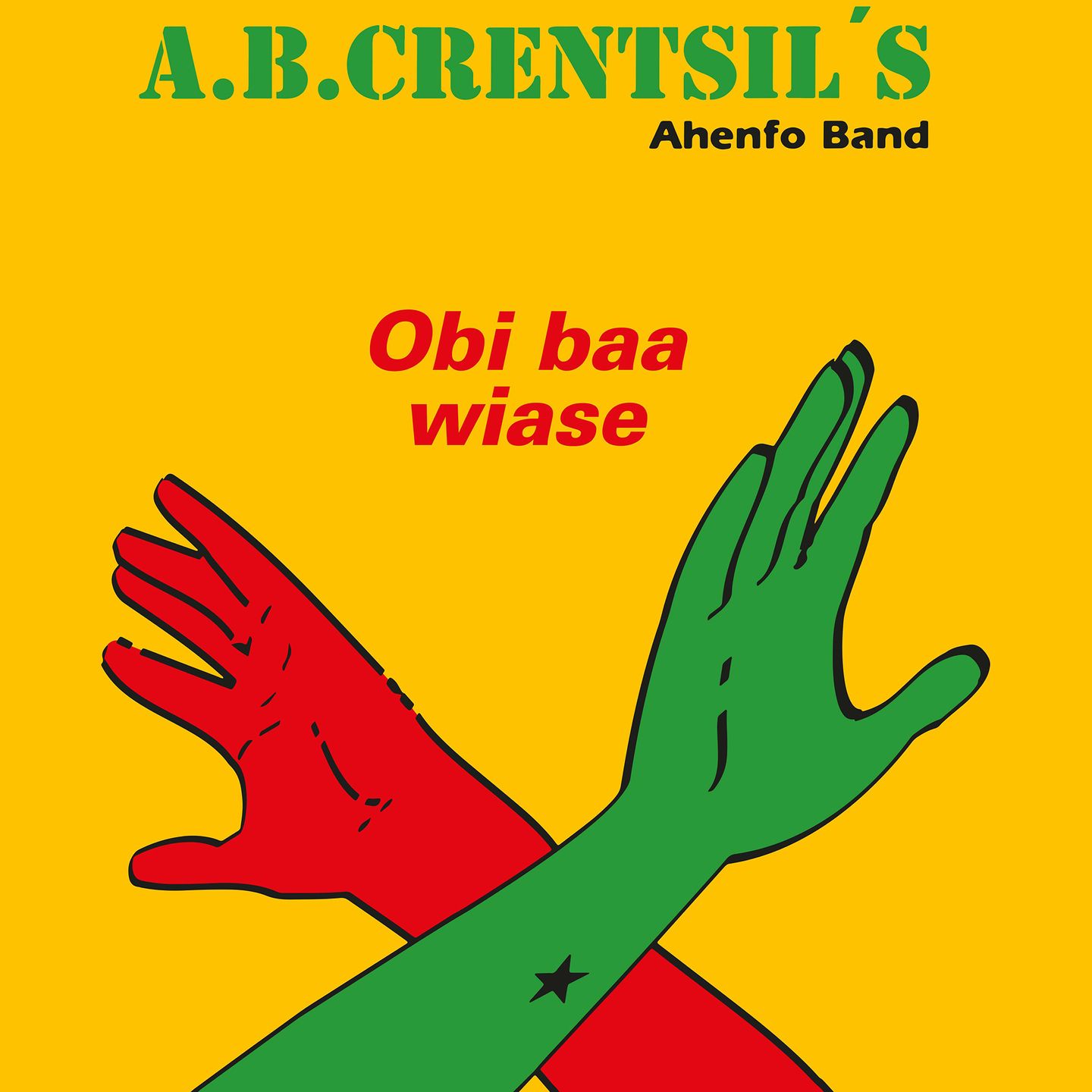 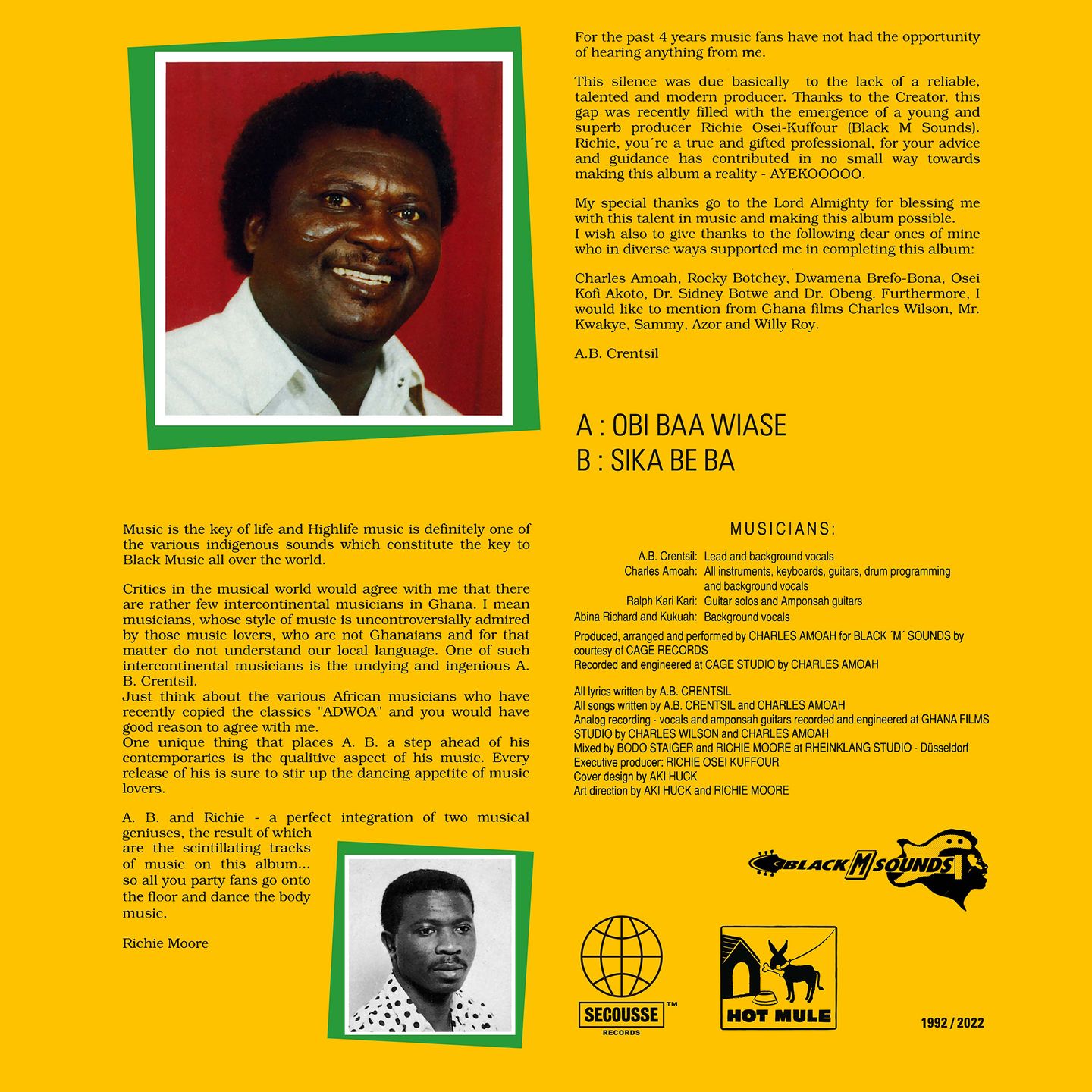 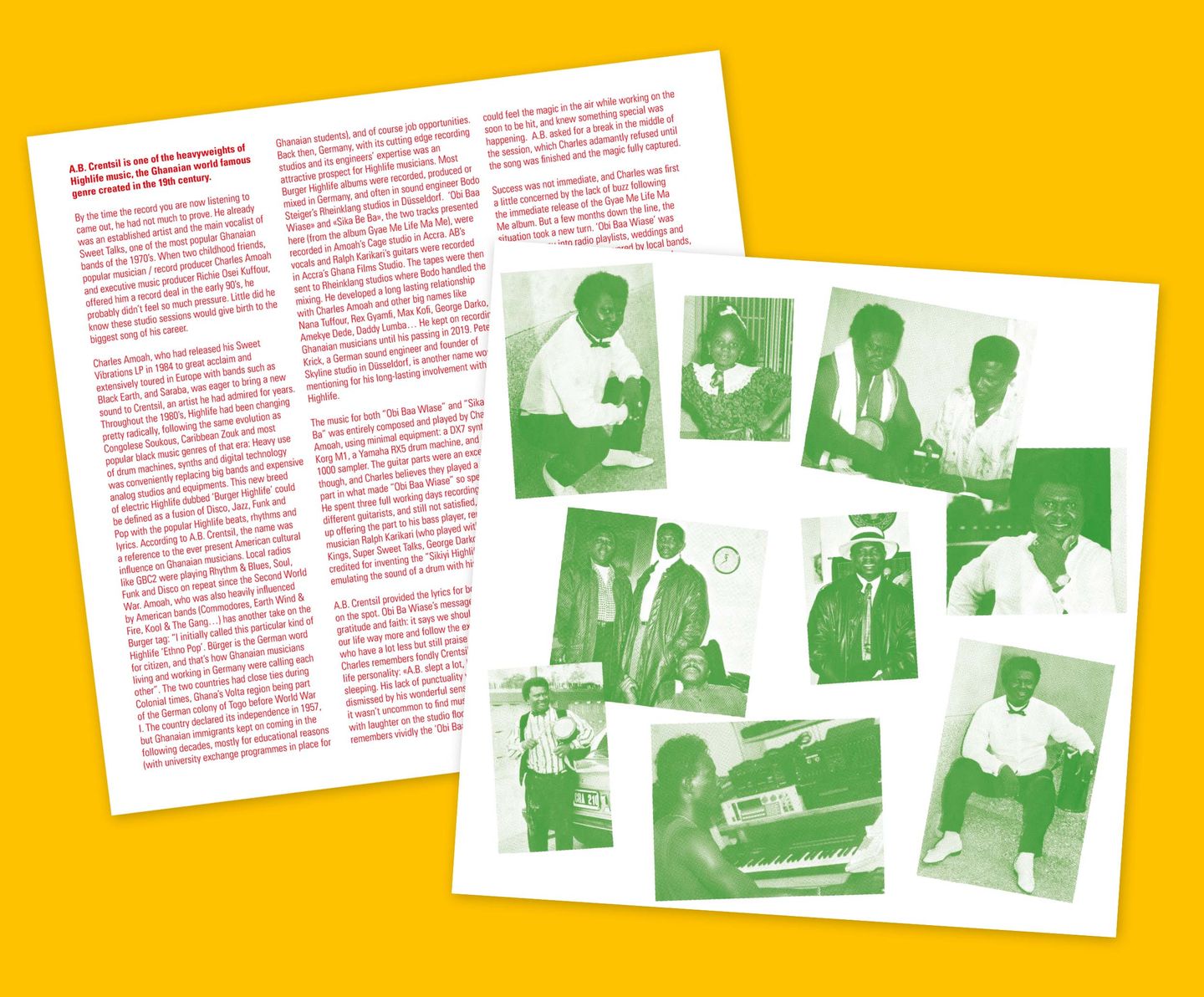 A.B. Crentsil is a heavyweight of Highlife music and the main vocalist of Sweet Talks, one of the most popular Ghanaian bands of the 1970’s. In 1992, musician Charles Amoah and producer Richie Osei Kuffour offered him the opportunity to explore a new popular sound: Bürger Highlife. Little did he know these studio sessions would give birth to the biggest song of his career.

Charles Amoah, who had released his Sweet Vibrations LP in 1984 to great acclaim, extensively toured in Europe with bands such as Black Earth and Saraba, was eager to bring a new sound to Crentsil, an artist he had admired for years. Throughout the 1980’s, Highlife had been changing pretty radically, following the same evolution as Congolese Soukous, Caribbean Zouk and most popular black music genres of that era: Heavy use of drum machines, synths and digital technology was conveniently replacing big bands and expensive analog studios and equipments. Mostly recorded, produced or mixed in Germany, this new breed of electric Highlife dubbed ‘Bürger Highlife’ could be defined as a fusion of Disco, Jazz, Funk and Pop with the popular Highlife beats, rhythms and lyrics.

According to A.B. Crentsil, the name was a reference to the ever present American cultural influence on Ghanaian musicians. Charles Amoah has his own take: “I initially called this particular kind of Highlife ‘Ethno Pop’. Bürger is the German word for citizen, and that’s how Ghanaian musicians living and working in Germany were calling each other”.

The music for both “Obi Baa Wiase'' and “Sika Be Ba” was entirely composed and played by Charles Amoah, using minimal equipment: a DX7 synth, a Korg M1, a Yamaha RX5 drum machine, and an Akai 1000 sampler. A.B. Crentsil provided the lyrics for both tunes on the spot. Obi Ba Wiase’s message is one of gratitude and faith: it says we should appreciate our life way more and follow the example of people who have a lot less but still praise God all day.

Charles remembers fondly Crentsil’s larger than life personality: "A.B. slept a lot, he really loved sleeping. His lack of punctuality was easily dismissed by his wonderful sense of humour and it wasn't uncommon to find musicians rolling with laughter on the studio floor."
Charles also remembers vividly the "Obi Baa Wiase" session: he could feel the magic in the air while working on the soon to be hit, and knew something special was happening. A.B. asked for a break in the middle of the session, which Charles adamantly refused until the song was finished and the magic fully captured.

Success was not immediate, and Charles was first a little concerned by the lack of buzz following the immediate release of the Gyae Me Life Ma Me album. But a few months down the line, the situation took a new turn. "Obi Baa Wiase" was making its way into radio playlists, weddings and festive celebrations. It was covered by local bands, and soon most of Ghana and its European and American diasporas were hooked. It became A.B. Crentsil’s most requested song at live events for the following decades.

As producer Richie Moore wrote on the album back cover : "A perfect integration of two musical geniuses, the result of which are the scintillating tracks of music on this record… so all you party fans go onto the floor and dance the body music".

Voilaaa is one of the many projects led and produced by Bruno “Patchworks” Hovart, who’s proven over the past 15 years, his place amongst the finest producers of groove music in all genres. This time exploring the wide spectrum of the African and Tropical Disco scene, he received a massive international support for Voilaaa’s first album, On te l’avait dit, released late 2015 on Favorite Recordings.Following to that success and pursuing the same direction combining of the festive, yet sometime futile nature of Disco, and the instinctive, deep, sometimes rough nature of African music, Voilaaa’s now presenting its 2nd efforts, Des Promesses.The 13 tracks of the album are again up to expectations, and Voilaaa has not finished feeding international dancefloors with heavy Afro-Disco music. Alongside Bruno at the production, singers Pat Kalla and Sir Jean are back providing their carefree lyrics and Afro vibes, and Senegalese artist Doctor Lass comes to extend the team, with 3 brilliant titles, including a great Funky cover of the classic “Mandjou” by Salif Keita and Les Ambassadeurs Internationaux..

**** DIZONORD DEADSTOCK ****This second-hand record is available through our collaboration with Parisian shop Dizonord, all items are in NM condition. Just add them to your order as you'll add any other releases. Limited quantities!A nice hypnotic and sensual Central African guitar record, typical 80’s productions of the region and its diaspora. These 120 BPM tunes could be DJ used by the DJs! We got this stock thanks to our friend Hadj Sameer, who found the vaults of an old African shop in the suburbs of Paris, held by a family that we met.

** Available exclusively at The Pusher **Born in a Gambian griot family, kora virtuoso and afro-fusion pioneer Jally Kebba Susso has been active in the UK music scene for twenty years. While based in London, he has tirelessly, through both personal and collective endeavours, built a singular musical identity by working hard on making the timeless Mandinka kora, an instrument he's been playing since his youth, sound like never before, combining the ancient West African strings with forward-thinking aesthetics and myriad of musicians and producers from the thriving London music scene such as Onipa, Dark Sky and Kay Suzuki.Jally Kebba Susso has already released two albums as a solo musician ("Malaye Warr", 2012 and "Banjul - London", 2017), as well as a member of the successful afro-fusion band Afriquoi, whose latest EP has garnered a very wide support, culminating in several million streams and performances on some of UK's biggest festival stages (Boomtown, Glastonbury).Freedom! A heartfelt shout expressing the newfound joy of an African musician whose working conditions, despite his long-standing roots in the London music scene, have sometimes been precarious. A newfound freedom to be able to look ahead and fully persue one's need of self-actualisation. Hence this new EP, written with the help of Jally's accomplished band members (Yuval Juba Wetzler, Nim Sadot and Oli Arlotto) and produced by Tom Excell (Onipa, Nubiyan Twist), whose 4 tracks all deal with topics (identity, homesickness, family, social justice) which are dear to Jally's heart as a Gambian native and West African musician settled in Europe.A pleasant atmospheric opener, "Wulu Doula" rides on a classic Afrobeat groove, while Jally reminds us how we are only what we become, no matter where we come from and who we inherit from. "Justice" is a stomping mandinka funk hit, in which "freedom, equal rights and justice" are claimed by Jally for all fellow artists and musicians from the West African diaspora working in Europe.Clearly anchored in Gambian music tropes and reminiscent of the pioneering mandinka fusion of Ifang Bondi, "Fakoly" tells the story of Jally's family lineage, as a member of the 74th Susso generation. As Jally puts it, "being a griot is a way of life". Homesickness can be a bitter feeling. But you can turn it around. That is exactly what Jally achieves with "Banjul", a cheerful, funky tribute to the Gambian capital, in which Jally grew up, learning words of wisdom from his elders.

Founded in 1996 by the German-Nigerian lead singer Ade Bantu, his brother Abiodun Odukoya and Patrice, BANTU have been one of the West African acts transforming the legacy of King Sunny Adé and Fela Kuti into the soundtrack of the continent. The group is distinguished by the fact that while created and fronted by vocalist Ade Bantu, it is unmistakably a collective, collaborative effort. When you have a band this strong, this tight where everyone gets to shine, magic happens. And once again with this new album, the 13-piece ensemble is pushing the boundaries of funkiness and political prowess for contemporary music, in Africa or globally. From their first release, “No Vernacular in 1996 to the present, BANTU has scored a series of hits across Europe and Africa garnering major awards. Indeed, the list of artists who've collaborated with BANTU is a testament to the power, originality and talent of the band: an international cornucopia including UB40, Tony Allen, Orlando Julius, Brothers Keepers (which they created), Gentleman, Ebenezer Obey and Burna Boy just to name a few. These collaborations helped the band earn several major Continental awards, including the Kora Awards (the Pan African equivalent of the Grammys) for “Best Group West Africa” and “Best Group Africa”. Their latest release Everybody Get Agenda is nothing short of a musical sensation - Afrobeat, Funk and Soul seamlessly flow into one another as they merge with Jazz, Highlife, Hiphop and Yoruba music. The lyrics address issues around corruption, injustice, migration, xenophobia and urban alienation while a guest appearance by Seun Kuti on “Yeye Theory” rounds up this solid long player. There is no doubt that with Everybody Get Agenda BANTU has not just charted new musical territory but reached it and planted the flag.