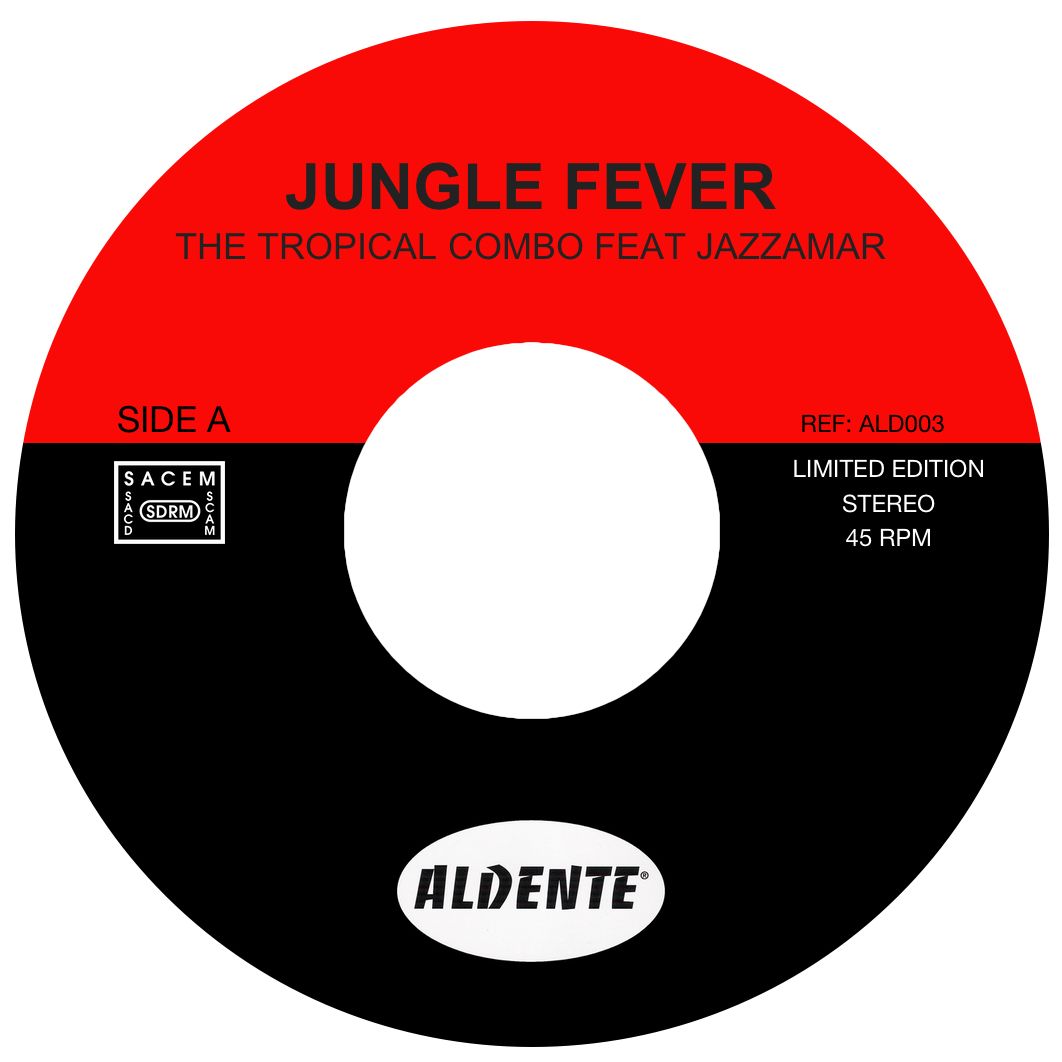 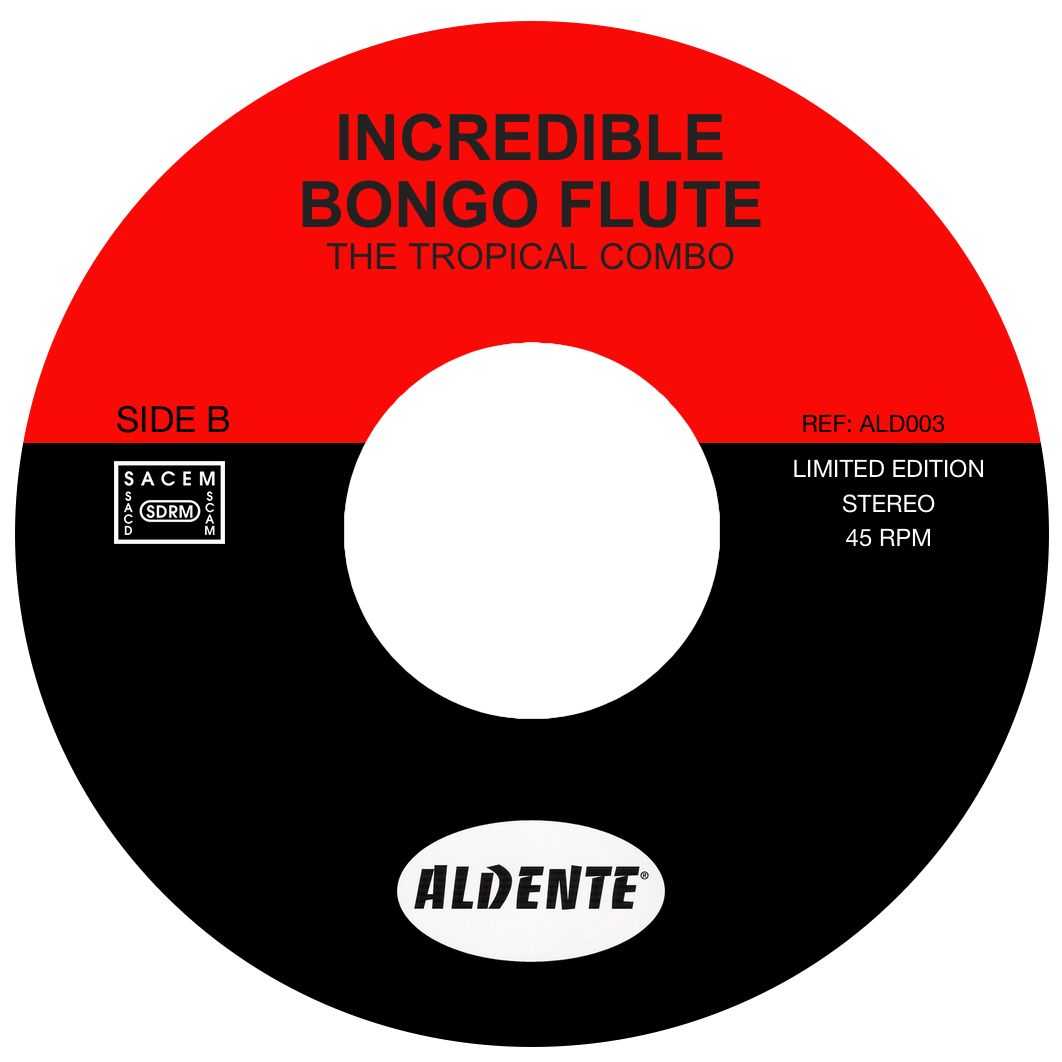 The A side entitled "Jungle Fever" talks by himself, a warm time in the African forest we are between "An Elephant Called Slowly" and "The Chackachas".

The B side "Incredible Bongo Flute" is an uptempo track as a tribute to the classic "Apache" with hot bongos, congas & flute. Put the needle on the record and this soul tune will make you think about the pressure on a cypher with B.Boys. Join the battle and make a break!

Dwight Druick’s born in Montreal to a professional gambler and an ex-Radio City Rockette. One of five children, he grew up in a family buoyed by music and beleaguered by the vagaries of miscalculated risk. After attaining a McGill University bachelor’s degree in Art History, Dwight fully embraced both music and risk by traveling to London, where he signed a contract with Pye Records and Joe Cocker’s management company. The ensuing record, Druick & Lorange was released to critical acclaim and relative success. After returning to Canada, Dwight recorded two albums with Phil Vyvial: Midnight and Minuit. Recorded with the Muscle Shoals Rhythm Section in Alabama, the duo’s work achieved airplay success in Quebec and across Canada. Dwight subsequently released his first French language solo album, Tanger, released in 1980 by the Canadian label, Bobinason.Today quite hard to find in its original version, Tanger is first of all an incredibly solid album, clearly underrated and deserving more credit. Mostly known by collectors and DJs for the stunning cover of Toto’s classic hit, “Georgy Porgy”, which was produced and arranged with the help of George Thurston (Boule Noire), it includes many other tasty titles, with amongst them another fine rendition of “Open Your Eyes” by The Doobie Brothers. In fact, with its brilliant mix of Modern-Soul, Disco and AOR styles, the whole album is already considered by many connoisseurs as a classic, and clearly a must have for anyone enjoying this musical blend.Never reissued on vinyl until now, there was not much more needed at Favorite Recordings to make it happened. Officially licensed to Dwight Druick, who was unfortunately not able to provide the original tapes, Tanger has been perfectly restored and remastered by Frank Merritt, at The Carvery, London. CD and digital edition will also come with “Georgy Porgy (Version Disco)” as a bonus track.

Paul Dupont And His Orchestra

Farfalla Records allows you to discover again the music of Roger Webb (aka Paul Dupont) with this album that could have been the perfect soundtrack for a crime film of the 1970s, alternating powerful tracks with jazz-funk rhythms and melodic tracks with light/romantic themes. Tapestry was recorded for the London based recording company Chappell Recorded Music and released in 1977 exclusively for professional use.

Can We Get Hooked Up?…

** EXCEPT PORTUGAL **Funkamental is a label of new releases and first-time-on-wax reissues curated by Funkamente, also behind the Edits Estrela and Lisbon's East Side Radio.When a record collection starts to grow, some blind spots become very noticeable: records too hard to find, upcoming artists with music so good it deserves a nice record or old releases that have never been pressed to vinyl. Yet.That's how Funkamental was born: out of the desire – should we say "the need"? – to have a specific release on vinyl. How specific? Anything that'd fit in our bag.The first Funkamental release is Sonic Fiction, the only album by Spaceboys, initially released on CD back in 2003 described as an interplanetary never-ending jam session between Sun Ra and Fela Kuti, materialized by the hands of Francisco Rebelo, João Gomes and Tiago Santos who first assembled as Cool Hipnoise in 1995 a prolific band recording a string of albums, singles and EPs revolving around Funk, Acid Jazz, Jazz Funk and Dub for the best part of ten years.

Favorite Recordings presents this new official album reissue of The Parker Brothers: Maybe one of the best Blue-Eyed-Soul/Modern-Soul private-press albums you can imagine, surprisingly highly unknown and underrated.Produced in 1981 by George P Grexa and released in a private-press version on his label Crown Vetch Enterprises, this album is filled with memorable material from the first note to the last, mixing Modern-Soul, Boogie, cross-over Jazz and Rock elements, for a result reminiscent of the WestCoast music’ golden years, however being recorded in Pittsburgh.As one of the longtime favorite collectable piece for Charles Maurice, it’s a real honor and proud for Favorite Recordings, to finally officially reissue it from the original master tapes and for the first time on vinyl.

Comet Records is so thrilled to present Psyco on Da Bus 20th Anniversary, for the occasion it will be reissued as a Double Vinyl LP and newly remastered.Recorded in just few weeks in the US during Tony Allen's Black Voices album tour in Spring 2000, on Doctor L’s G3 in different places as hotels rooms, local studios (Nyc, Toronto) and the tour bus.Doctor L and the members of Tony Allen & Afrobeat 2000 band get the idea of making a collective album alltogether, co-writing both songs and music and creating a new spectrum that reflects their different musical backgrounds. Doctor L, Tony Allen, Jean-Phi Dary, Cesar Anot, Jeff Kellner are the “psyco bus” members.Completed later in Paris with guests artists like Smadj, Dom Farkas and Eric Guathier, Psyco On Da Bus project fill the gap between the 70's and the new millenium, blending afrobeat rhythms, gospel & soul vocals, jazz & funk licks with wicked electronics and astonishing production.From the futuristic funk of “Afropusherman” to the eastern sounds of “Many Questions” or the killer floor filler “Push your mind Breakbeat” , from the underrated spiritual suite “Time To Take A Rest”, hybrid fusion of free jazz, poetry, rare groove and nu-beats, to the outstanding “Never Satisfied”. Last but not least the artwork was created and produced by the talented french graphist designer, filmmaker Edouard Salier. Tony told about his collaboration with Doctor L on this project in 2001: “Younger people are coming into Afrobeat right now. And I personally don't want to be past, I want to be future. Young people like hip-hop, and techno, which is what I must think about. It's the direction I want to take. It's an experiment I've wanted to try. That's why I wanted Doctor L to produce the album.”