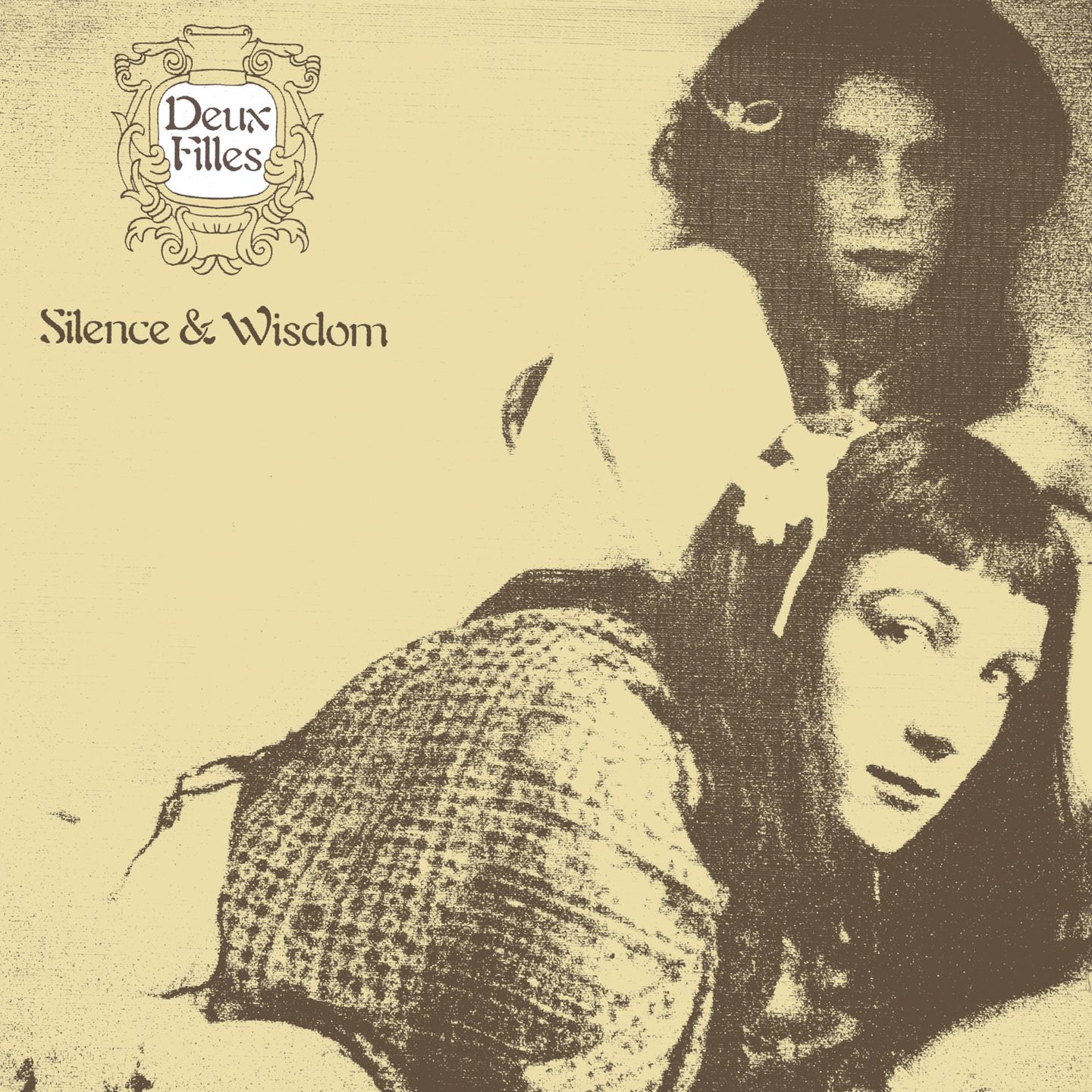 Deux Filles was not, in fact, two girls despite what the group name and its elaborate hoax of a backstory suggest. No, they were not Gemini Forque and Claudine Coule, French women who met as teenagers under tragic circumstances and became fast friends, recording two albums together before disappearing into the ether. In reality, Deux Filles was Simon Fisher Turner and Colin Lloyd Tucker, a UK duo who first worked together in an early incarnation of The The.

Straddling the line between experimental and pop, Turner was an actor and teen singing star who later composed soundtracks for the iconic queer filmmaker Derek Jarman while Tucker’s career began as an engineer for the famed UK library music studio, De Wolfe, before forming experimental wave group The Gadgets. In Deux Filles, the duo found an outlet for their least commercial tendencies, combining lo-fi proto-dream-pop instrumentals with samples, tape experiments, ambient textures, and drum machines. Even in the vibrant, seemingly endless well of UK DIY, Deux Filles stand out.

Silence & Wisdom – the duo’s 1982 debut – is a series of musical vignettes, like the score of an unrealized arthouse film. Blending processed guitars, sheets of synthesizers, echoey pianos, and washed-out vocal snippets to surprisingly varied effect, the album is recommended for fans of Durutti Column and Virginia Astley’s From Gardens Where We Feel Secure.

Drinking At A Stream

The Draw In Room

For his twelfth studio album, Pianissimo, Matthias Vogt ([re:jazz], Motorcitysoul) makes a clear political statement in symbiosis with his well-placed notes and the stylishly experimental and pronouncedly eclectic electro-jazz sound. Pianissimo does not only mean playing very softly but also playing very intensively. It is definitely not an album to skip through.Matthias Vogt combines great music with current socio-political attitudes and issues for this new album. He conducted interviews on topics like “climate change” with people from his circle of friends and acquaintances - creatives, artists, activists and musicians who tick similarly to himself and with whose voices he could give expression and form to his own thoughts. With this material, he created this hybrid piece of music and socio-political reflexion.His companions are Demian Kappenstein (ÄTNA & Massa) on drums & guitarist Daniel Stelter (Sing mein Song, TV-Total Heavytones). Vinyl incl. the outer packaging will be produced on a completely recycled basis by INFRACom! which starts its 30 years celebration with this release.

So What You Want…

Freshly signed artist named Ian Ash (also know as “H” and Sunny G) delivers a massive filtered boogie house track. So What U Want will also come with a Lord Funk remix which sound a bit more electro funk to blast the dancefloor.This track is a radio killer and should be loved by many musiclovers including DJs, producers or simply people who like to listen to mainstream vocal house as French touch production. A bunch of samples and played instruments make it efficient and support the sweet voice of the singer Djemaïli. He is known first as an R’n’B singer, but he liked to perform on this future classic – and you can hear it!Ian Ash is known as a resident DJ of the World-famous Montreux Jazz Festival where he has spun records yearly between 2001 and 2019. Including 1st and 2nd parts of George Clinton Parliament Funkadelic, Spearhead feat. Michael Franti, Doctor L, Tony Allen,Jean Grae, Raphael Saadiq, Will Calhoun, Common,Dj Cam, Mister Mike, Benji B, Souljazz, Andy Smith,Buddah Monk, Jimmy Cliff back band, Jamie Lidell, and Claude Nobs himself!He spun also at Cargo (London), SPACE (Ibiza), NL (Amsterdam), Divans du Monde (Paris), etc. He surely is in the top 10 Funk DJs in Europe. He also has been stage and studio audio engineer for 2 decades and has mixed a couple of live artists such as Joe Sample, Mandrill or even AIR. He has mixed more than 90 concerts at Montreux Jazz Festival 2002 and deeply participated in producing 4 Days in Geneva by Ohmega Watts more recently.

After his acclaimed debut EP « Cotonou » on Alma Negra’s record label, James Stewart comes back with his new EP Atlantic River Drive for Mawimbi Records, featuring two collaborations with Ghanaian kologo musician Ayuune Sule as well as two remixes from Simbad aka SMBD.James Stewart met Ghanaian kologo musician Ayuune Sule, after booking several shows of kologo music star King Ayisoba in Lyon. Stewart was quick to witness the bluesy tone of Ayuune’s voice and his kindness as a musician, despite his impressive stature. Quite logically, Stewart invited Sule to record vocals on two of his ongoing demos at Bruno Patchworks’ recording studio (Voilaaa, Mr. President, Da Break), with the idea of making a rather unheard crossover between traditional kologo music and contemporary styles that would both appeal to Ghanaian crowds and a Western audience. Stewart then had a number of his arrangement ideas re-recorded by a talented cast of musicians, resulting in a brilliant mix of acoustic and electronic textures, sounding both vintage and modern.Nodding to Eddie Palmieri’s landmark record “Harlem River Drive”, “Atlantic River Drive” is a stomping dancefloor track, drawing from the 6/8 feel of kologo music and the energy of contemporary club music. The track can be read as a tribute to the musical cross-pollinations between the African continent and its many diasporas, which Stewart has dedicated a long part of his life to, but also as a more intimate story about his life and family. All words were written by Stewart and then translated by Sule in his native Fra fra language from Northern Ghana.“Where Are We Going?” is a two-part journey that reminds us that we should care about each other, about our communities while we don’t know what the future is made of. An important and much welcome message to navigate through these troubled, uncertain times. Referencing congolese N’dombolo tracks, the track has two parts and rich arrangements, with its first part going deep with syncopated clarinet hooks and playful percussion parts, and its second part moving to a four-on-the-floor pattern and an entrancing baritone saxophone solo. The EP also features Worldwide FM and Brownswood maestro Simbad, who delivers two dancefloor-ready reworks of the track “Where Are We Going?” under his SMBD moniker, turning it into a spiritual, dubby journey, as well as an emotional house music track

Back in 2007, Xavier Boyer, frontman of French indie maestros Tahiti 80, released his first solo LP Tutu To Tango under the “nom de plume” Axe Riverboy. He didn’t think it would take another 10 years for the follow-up but here it is and it was well worth the wait.The title Some/Any/New, his tip of the cap to Todd Rundgren’s Something Anything album, reflects both the atmosphere and the process, Boyer crafted the new set playing everything, save a few overdubs recorded with collaborator Stéphane Laporte, using a laptop, an 8-track tape machine and a few cherished instruments (a groovebox, a guitalele and a casiotone).The album is awash with classic melodies, sweet Odessey & Oracle-esque vocals and the songs have a warm, organic glow, enhanced by some rough edges and little imperfections, happy accidents of the DIY nature of the recordings.Xavier pieced together the album over quite a long period. The songs were written in different places, in different towns and houses. Given all of that, it is perhaps surprising that the finished record is so coherent, light-infused and optimistic. What is supremely evident is Xavier’s ability as a songwriter; here he again delivers a set of gorgeous, contemporary and immediate pop songs. From the exquisite harmonies and frayed electronics of “Cherry Cloud Panic” through to the down-tempo, deliciously melancholic track, “Longing/The International Merry-Go-Round” we are in the company of an artist, confident in his creative ability. This is a highly-enjoyable piece of work - as the man himself says “It’s “like opening a window to the world on a sunny day.”