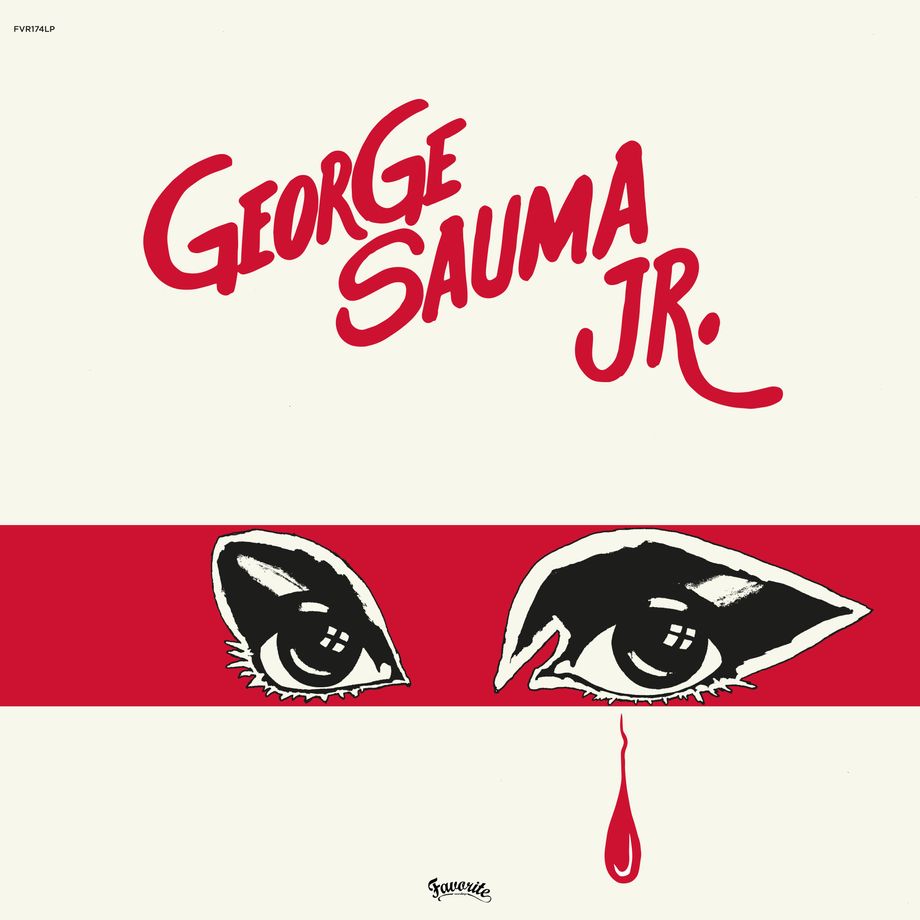 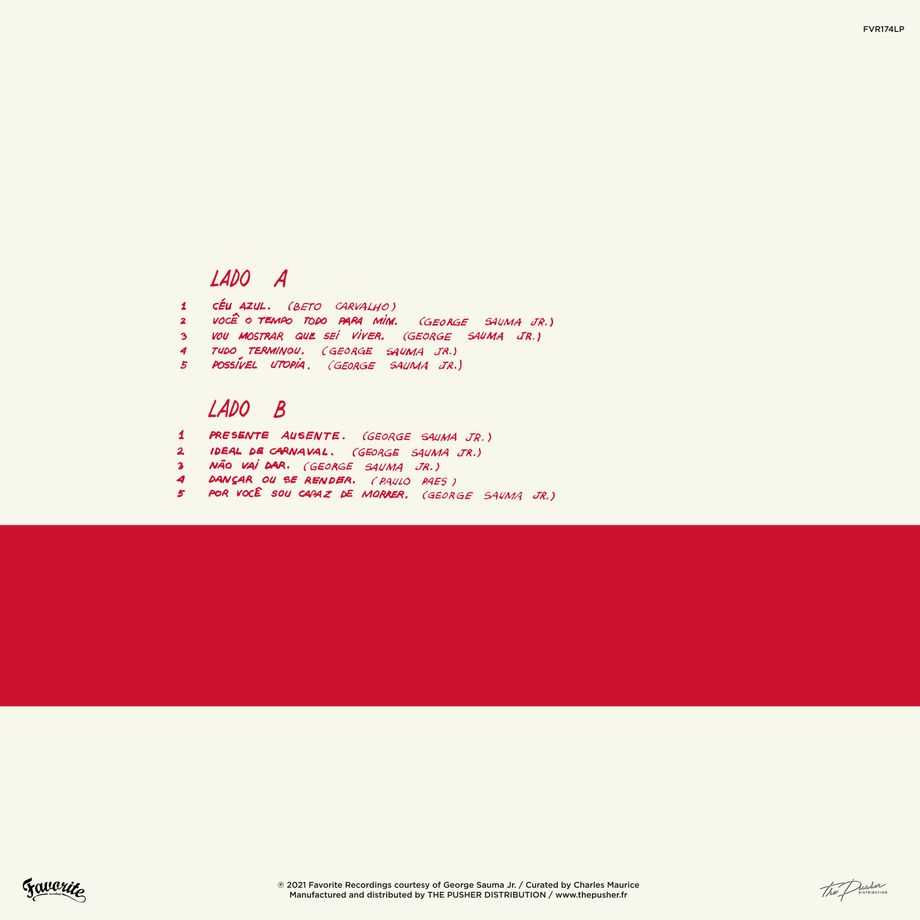 Favorite Recordings proudly presents an exclusive eponymous LP by Brazilian singer and composer George Sauma Jr., originally produced in 1985. Imagine a never-marketed release on which you’d hear not only the beautiful and genuine George’s songs but also the work from two figures of the Brazilian Music Golden Age: Arthur Verocai and Junior Mendes! A much-needed album for all Brazilian connoisseurs.

Back in the days, George Sauma Jr. was a young artist from Rio de Janeiro, learning on his side how to play chords and compose songs since he was 10. Still at the university, he’s influenced by Brazilian artists like Cassiano or Tim Maia, deeply fascinated by the arrangements and the “levada” (the groove) of all these new Brazilian songs. Simple and romantic music that resonated to his soul and creativity.

Around 1985, the story took an unexpected turn. George tells: “Dna Deyse Lucidy, the mother of Junior Mendes was a candidate for deputy and went to my father’s company to advertise. When I saw her, I shouted, “I’m a big fan of your son!” ” Of course, she could not praise more the work of her son. On her advises, George went to his studio on Rua Siqueria Campos at Copacabana. Junior loved the project and sent him to Arthur Verocai to improve the arrangements. Without money, the decision was taken to record everything at Junior Mendes’ studio on an 8-channel mixer. It was a small set-up but the emotions were there! George surely had other plans for some of his songs but without the budget, they ended up doing everything the best they could. And they did very fine with a top-notch team of musicians: Paulo Black on Drums, Arthur Verocai on Guitar, Ricardo Do Canto on Bass and Helvius Vilela on Keyboards.

Leaving the studio with the tapes, George tried to knock doors of international labels, but none did even dare to give him an answer. With less than 1000 copies pressed back in the days and without any distributor or label behind him, he went with proud to record stores, but received nothing than a strong reality check regarding the difficulties for a young Brazilian artist to achieve something on the saturated market of the 80s. Even for free, record stores didn’t want it. In the end, he ended up giving copies to friends and families, knowing deep inside that the songs were good! George tells: “I decided to leave, calm and conscious. I’ve still made three more albums, however on tapes, as it was more affordable. This time, just for my pleasure…”.

Thirty-five years after, it’s with great emotion that this first album by George Sauma Jr. is now made available as Vinyl LP with its original offset printed innersleeve & CD.

Comet Records is so thrilled to present Psyco on Da Bus 20th Anniversary, for the occasion it will be reissued as a Double Vinyl LP and newly remastered.Recorded in just few weeks in the US during Tony Allen's Black Voices album tour in Spring 2000, on Doctor L’s G3 in different places as hotels rooms, local studios (Nyc, Toronto) and the tour bus.Doctor L and the members of Tony Allen & Afrobeat 2000 band get the idea of making a collective album alltogether, co-writing both songs and music and creating a new spectrum that reflects their different musical backgrounds. Doctor L, Tony Allen, Jean-Phi Dary, Cesar Anot, Jeff Kellner are the “psyco bus” members.Completed later in Paris with guests artists like Smadj, Dom Farkas and Eric Guathier, Psyco On Da Bus project fill the gap between the 70's and the new millenium, blending afrobeat rhythms, gospel & soul vocals, jazz & funk licks with wicked electronics and astonishing production.From the futuristic funk of “Afropusherman” to the eastern sounds of “Many Questions” or the killer floor filler “Push your mind Breakbeat” , from the underrated spiritual suite “Time To Take A Rest”, hybrid fusion of free jazz, poetry, rare groove and nu-beats, to the outstanding “Never Satisfied”. Last but not least the artwork was created and produced by the talented french graphist designer, filmmaker Edouard Salier. Tony told about his collaboration with Doctor L on this project in 2001: “Younger people are coming into Afrobeat right now. And I personally don't want to be past, I want to be future. Young people like hip-hop, and techno, which is what I must think about. It's the direction I want to take. It's an experiment I've wanted to try. That's why I wanted Doctor L to produce the album.”

Pursuing their explorations in the vast corridors of international Funk and Disco music, Favorite Recordings and Bruno "Patchworks" Hovart present us Voilaaa. Following a first 2 tracks single acclaimed this summer and clearly revealing the Afro-Disco inspiration of this new experience, here comes Voilaaa’s first album, titled On te l’avait dit.Under the imprint of the label and after their long years of collaboration in the achievement of projects such as The Dynamics, Mr President, Mr Day, Patchworks Galactic Project, or Taggy Matcher, the insatiable French producer therefore returns to his first love and specialty, Disco music, staring this time at the African and Caribbean influences.Indeed, as everywhere in the 70s and 80s, Funk and Disco movements were extremely influential in these regions, and in most cases, the combination of the festive, yet sometime futile nature of Disco, and the instinctive, deep, sometimes rough nature of African music, sounds like a perfect balance. Aiming to find back this energy and specific sound, Patchworks quickly began producing a few tracks; Using his unique and ruling beats and bass lines as foundations, this time he dresses all with guitars, keyboards and brass distorted with vintage and DIY effects pedals and boxes. Surrounded by a very dynamic music scene, where there is no shortage of artists with African origins, Patchworks decided to work with local singers, even if it means to accompany them on unusual musical paths. A more than successful bet with a result surprising of authenticity, as it’s unveiled recently with two explosive titles alongside Sir Jean and Pat Kalla, both from a musical background as rich than different.The 10 tracks of the album are instantly up to expectations, chaining hit after hit tirelessly, and offering a few more brilliant collaborations with Renaud Bilombo, but also label mates Hawa and Fouley Badiaga. With this new escapade, Patchworks and Favorite Recordings make a strike again and confirm them a little more if needed, as the true warrant of the modern dancefloors’ loyalty to the spirit of their mythical ancestors ... Voilaaa tout (Thaaat’s all)!!

After a first edition acclaimed internationally, Favorite Recordings and Charles Maurice finally follows-up to their French Disco Boogie Sounds compilation with a second volume!!Pursuing his fine work at digging rare music from around the world, DJ and collector Charles Maurice presents another brilliant selection of great music linked to France and French West-Indies: 12 hidden and forgotten titles, all produced between 1978 and 1985, whether in France, or by French artists abroad. This time again, he perfectly browse and defines the great energy and quality of this specific Disco/Funk scene at that time, both in the underground market, or through bigger labels.On one hand, tracks by Crystal, Jackie Esam, Ideku Dynasty or Marc Ashy, were produced by small artists and labels from the French Caribbean and African community and also filled with a raw spirit and some Tropical influences. On the other hand, tracks by Claude Morgan, Greg Smaha, Roots, or Black Bells Group, were released by major labels such as Phonogram, RCA, Derby, or Carrere, thanks to confirmed independent producers, acting not only in France, but also in Canada and the US.Today, Favorite Recordings and Charles Maurice are very proud to unearth these 12 gems, with amongst them some very hard to find and almost unknown titles.

In A South Africa / At The Reggae Party…

R.Zee Jackson, a born Jamaican spent his early childhood in Clarendon and later in Old Harbour, St. Catherine, Jamaica, West Indies.In 1975, as a student, he moved to Canada with his Mom. There he met Oswald Creary of Half Moon label and studio. At Half Moon studio, he recorded the original tracks of ''Long Long Time'' released as a 12'' vinyl record on his own label ''Ital''. Esso Jackson also recorded at ''Dub World'', the dubplates cutting studio in Toronto. All the sound men from all over came to see ''Snipa'' the dub cutter; “It was great, dancehall was rocking in Canada. We have it lock with all the big sound systems and artists from all over the world”. One day, the keyboard master Jackie Mittoo say to Esso “you can't stay cold up yourself in Canada”. Because R.Zee had many family in the UK, it was easy. So he decided to see what was going on in London. In 1980 he released the album Trodding, produced by Mike Brooks (Teams / Coptic Lion). Few years later, he released "Ina South Africa", a heavyweight digital reggae to fight against Apartheid and also "At The Reggae Party", a pure dancehall anthem to mash up the dance. The songs were recorded at Utopia studio (London, UK) in 1985.

Hi-Life & Afro-Funk essential from Ghana! The legendary K. Frimpong's fantastic rare second album recorded in 1975 at Ghana Films Studio. K .Frimpong was born on July 22nd 1939 at Ofoase in the Ashanti-Akim district and entered right into music after elementary school by joining "Star de Republic" and later “Oko's Band” after which he left to K. Gyasy's band where he worked for more than 6 years.As a prolific songwriter and singer, here's the reissue of his 2nd album, a modern fusion of Hi-life and the traditional beat called "Ahyewa".The excellent background is given by the Super Complex Sounds band which makes the Ahyewa beat abundantly, dancable, and colourful.Originally produced on “Ofo Bros”, label of the Ofori brothers in Kumasi, this two long sides recording were divided in 6 themes each sides, and make a deep 16 minutes long hi-life trance.A must have vinyl of percussive Afro-Funk & modern Hi-life for all the music connoisseurs. Remastered by Frank Merritt at The Carvery / Pressed on Deluxe Replika format / Fully licensed to the Alhadji Kwame Frimpong Family