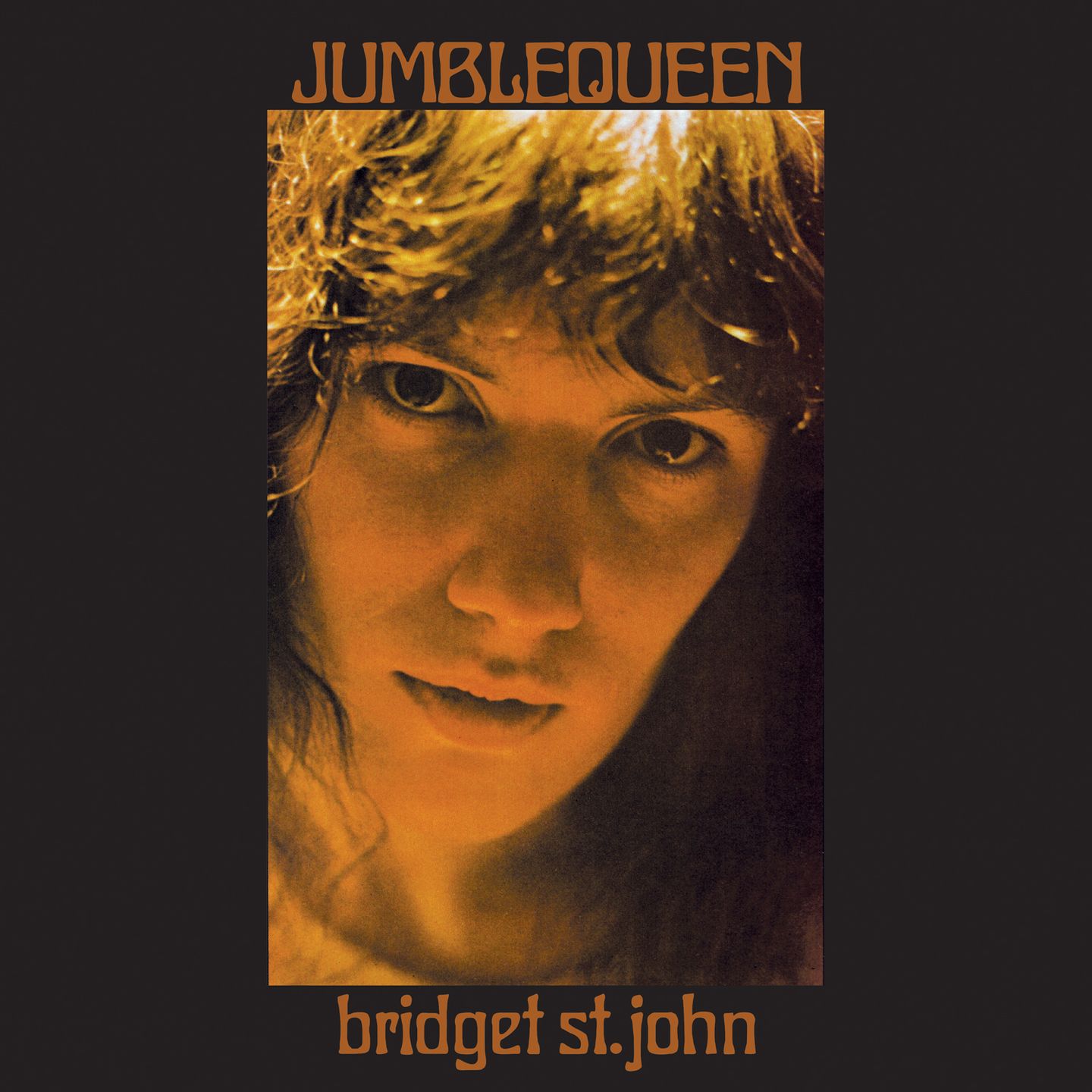 English singer-songwriter Bridget St. John grew up in a musical family in Surrey, beginning on piano, viola and trumpet before picking up the guitar in high school. In the late 1960s she met the brilliant John Martyn who quickly became a fan and brought her music to a larger audience, which included the legendary DJ John Peel, for whose label Dandelion St. John recorded her first three albums. Our Swimmer is pleased to present this first-ever vinyl reissue from a UK songwriting hero.

St. John’s voice – best described as a more refined Nico – is the focal point here. Her breathy, earthen tones perfectly complement the lovelorn lyrical content. With a more subdued sound than the rock-heavy backing group might suggest, Jumble Queen is an essential bit of UK folk-rock and singer-songwriter brilliance. After this album, St. John moved to the States and all but left the music business, not releasing another album for more than twenty years.

Song For The Waterden Widow

I Don't Know If I Can Take It

Some Kind Of Beautiful

Want To Be With You

A Beat For You…

Emotional Rescue and Jamwax come together to present the first of three essential 12”s from NY/Jamaican label Capo Disco, all officially licensed and remastered for the first time. The brainchild of reggae vocalist, musician, producer and label owner Glen Adams, the label married disco with his Caribbean roots to perfection.Born and raised in Jamaica, Adams story is a similar one to the performers of the golden period post-Independence. Initially discovered as a vocalist by Coxsone Dodd, he went on to work with such luminaries as Ken Boothe and Stranger Cole before co-founding The Heptones and working Duke Reid, Bunny Lee and Lloyd Charmers.As a session organist he worked for The Hippy Boys, The Reggae Boys and later with Lee Perry’s The Upsetters. Here he came in to the orbit of The Wailors, touring England with them in the early 70s and with Perry co-wrote Mr Brown. When most of The Upsetters became Marley’s rhythm section, Adams stayed with Perry before making the move to Brooklyn in 1975.There he started Capo Records, running it and it’s sub-labels, successfully until the mid-80s. During these later years he ventured in to mixing Reggae with Boogie and Disco rhythms and released just four 12”s under Capo Disco as well as recording boogie and hip-hop influenced releases with T Ski Valley and as Glen Adams Affair for SAM and Moonglow Records.Here then the spotlight is on Adam’s nascent disco releases and the series starts with the wonderful, uplifting A Beat For You. Actually appearing on a one off sister-label, Top Secret, this is a beautiful “Lovers” anthem from Adams over a laidback dub-bass riddim. Backed with a simple instrumental Version, the space and interplay of the keys and guitar over drum and bass is superlative. “There is a beat in my heart, just for you…just for you.”

Originally released in 2002, Comet is proud to present the legendary album Homecooking, reissued with a remastered version.Tony Allen talks about the album: “After Black Voices and Psyco on Da Bus albums, I came back with HomeCooking which was an album filled with guests. I brought in Ty, who had remixed some of my work previously, to rap on the record, and Damon Albarn, who had already sung about me on ‘Music is my Radar’. On the first day in the studio, Damon didn’t record anything because we were enjoying ourselves too much. He came with two boxes of champagne and everyone got boozed and he decided he’d take the music back to his own studio and finish it there. That was the beginning of our friendship and since then we’ve done a lot of different things. Since the early days I’ve been trying to find things that everybody will want to listen to. I’ve always been pushing Afrobeat in different directions. Here’s another one again, another style, almost clean but still rough, raggedy and radical.’’

Gentle waves lap the soft white sand. The limitless ocean fills the view as the sun slowly sinks below the horizon. As the day ends in blue and orange tones, the heat begins to subside, a sure sign that the slow evening migration from the beach will soon begin. A pleasant, yet formidable music comes from the radio tuned into a frequency transmitted from Paris. Maybe it was written and recorded in the 70s, or maybe it has simply soaked in that aesthetic all the way down to the pauses. It doesn't really matter. Delving deep to explore the roots of Brazil’s musical tradition, the Camarão Orkestra has tapped into Candomblé and its rhythms. Born on the drums of enslaved Africans in a ritual that invokes numerous deities, they lay the foundation for this new album, Nação África.The eleven musicians, guided by Amanda Roldan’s silky voice and guest appearance by Anthony Joseph (“Canto De Bahia”), explore and embrace the murmuring polyrhythm of Brazilian percussion instruments, vibrating berimbau and squeaking cuícas, pouring their tightly-wound funk bass into the groove and letting their jazz fly free, together and solo.The seven nonchalant tracks get your hips swaying, whether you’re in a comfortable armchair or surrounded by other dancers. They take your mind far away, on a journey paved by analog synths with Fender Rhodes crystals to the horizon where the sun’s last glimmer has finally faded away. The brass section’s shiny bells, valves and keys reflect the images and ambiance of the soft Brazilian night air.

South American Jazz & Bossanova flavours from 60s & 70s in Liguria, north west Italy. Melody sounds really close to Brazilian Portuguese and instrumental tracks smells of South American Jazz.Nonetheless, the sound landscape clearly reflects the Italian Library Music of the time. This mingling was made possible by the commercial and cultural interconnections during the discovery of the New World: the local Ligurian language was influenced by new stimuli from the new territories and vice-versa. Moreover, from the end of the Nineteenth Century, a strong migration of Italians involved South America, with numbers comparable to the Italian migration in the USA, but less known because less represented in films or narrative.As a result of these connections, these songs sound mellow, carioca and exotic, based on the phonetics of one of the most musical, folkloric and peculiar Italian dialects.The artwork project is a homage to lithographs and ADV that were inspired by the first tourist and migration trips departing from Genoa towards Rio De Janeiro. The lithographs were recovered by “L’Image” an existing art gallery in Alassio, a small town in Liguria."Bossa Ligure" can be seen as a micro-genre and a different form and aesthetic of Brazilian music, which is unknown to many, but that we would like to make available with this collectanea. A musical and a cultural expression which reveals a strong influence and connection to the Brasileiro sound in an unexpected territory.

Floxmade! Anglo-French binational FLOX has been sowing his Nu-Reggae seeds for years now in venues all around France, and a new genre has sprung up, somewhere between roots reggae and electro. Deeply influenced by the Jamaican Culture, from LKJ to The Police, to the more modern Fat Freddy’s Drop.