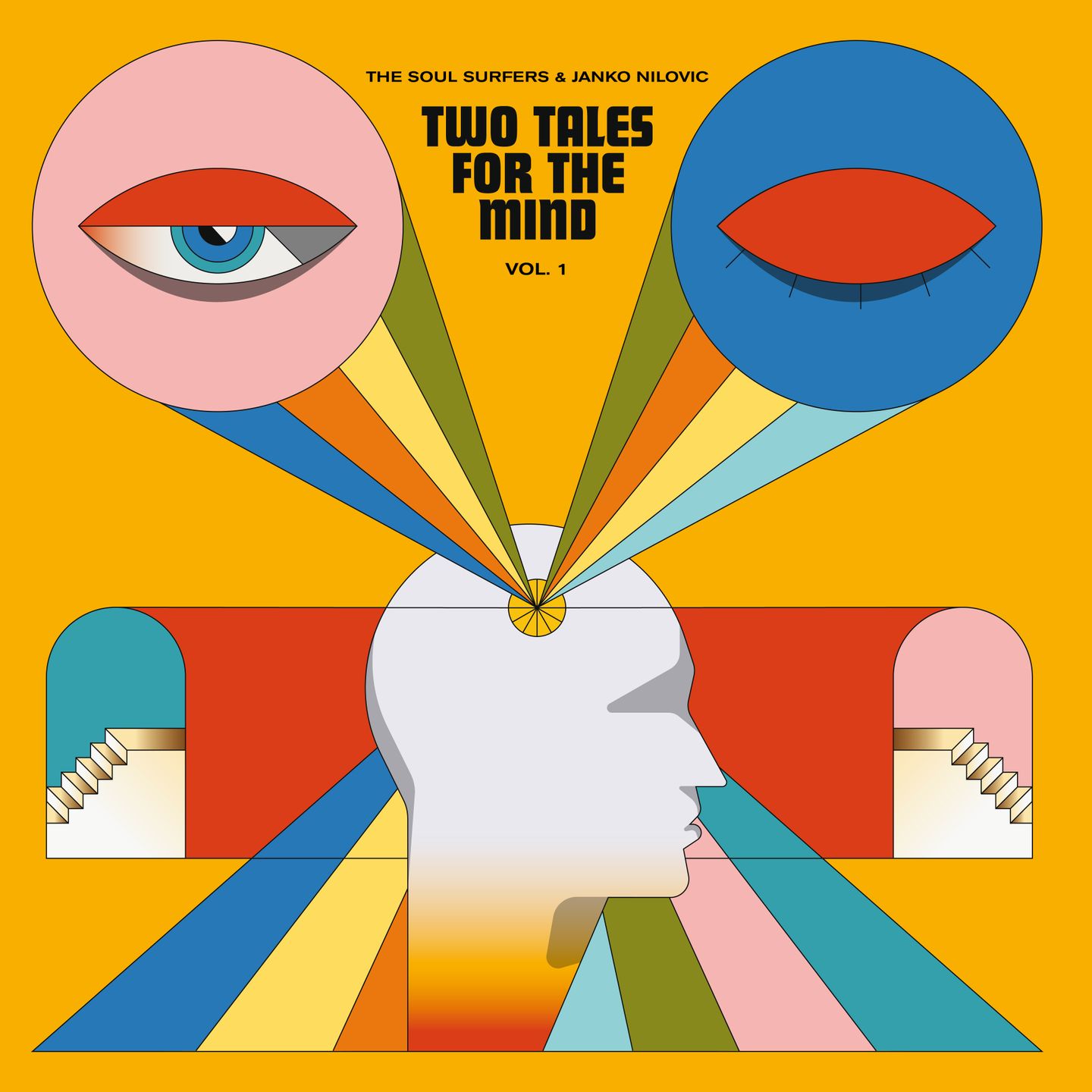 In the 1990s, Malka Family landed from the planet Kif to convert France to their vibrant and crazy madness made of euphoric riffs and glittering suits. Direct heirs of George Clinton and his cosmic P-Funk, they quickly burned stages around the world with this communicative energy which only large ensembles have the secret to. France, Europe, Japan, Africa, Canada… They will be forced to stop in the early 2000s replaced by DJs and computers.2021. June 5th. Three years after the reformation of the band, Ground Control received a message from "Major Thom" - the astronaut Thomas Pesquet himself. The post is clear! Le Retour du Kif produced in 2018 is played in space… @Thom_astro and all the crew members of the ISS are totally fans of the Malka Family’s Music!A new era begins, the Jedi of Funk have swept away the machines and their logarithmic music, groove and heavyweight Funk reign in the galaxy once again. The Malka Family is releasing a new 14 track album, SuperLune, a crazy and heavenly funk combo!This time, back to Malka Family’s old recipes. They spend hours, nights in the studio, writing songs, arranging horns, recording vocals, slapping the bass guitar… "SuperLune is a more introspective album, we did everything without any restrictions, and our funk is more accomplished than ever…" says Jo Mannix fresh out from mixing the album. French Radio Nova tells: "In their spaceship, the bass is definitely queen. From your head to your feet and (especially) through your buttocks, “Blue Funk” will awaken your senses. Without even realizing it, you've already been swept up in the crazy storm of the Malka Family. All the ingredients are there: the dance, the music and an atmosphere that only they have the secret to…" Last but not least, to accompany the interplanetary release of SuperLune, Malka re-embark in their spaceship for the next cosmic tour. Let’s go to the Moon! The SuperLune!

Dwight Druick’s born in Montreal to a professional gambler and an ex-Radio City Rockette. One of five children, he grew up in a family buoyed by music and beleaguered by the vagaries of miscalculated risk. After attaining a McGill University bachelor’s degree in Art History, Dwight fully embraced both music and risk by traveling to London, where he signed a contract with Pye Records and Joe Cocker’s management company. The ensuing record, Druick & Lorange was released to critical acclaim and relative success. After returning to Canada, Dwight recorded two albums with Phil Vyvial: Midnight and Minuit. Recorded with the Muscle Shoals Rhythm Section in Alabama, the duo’s work achieved airplay success in Quebec and across Canada. Dwight subsequently released his first French language solo album, Tanger, released in 1980 by the Canadian label, Bobinason.Today quite hard to find in its original version, Tanger is first of all an incredibly solid album, clearly underrated and deserving more credit. Mostly known by collectors and DJs for the stunning cover of Toto’s classic hit, “Georgy Porgy”, which was produced and arranged with the help of George Thurston (Boule Noire), it includes many other tasty titles, with amongst them another fine rendition of “Open Your Eyes” by The Doobie Brothers. In fact, with its brilliant mix of Modern-Soul, Disco and AOR styles, the whole album is already considered by many connoisseurs as a classic, and clearly a must have for anyone enjoying this musical blend.Never reissued on vinyl until now, there was not much more needed at Favorite Recordings to make it happened. Officially licensed to Dwight Druick, who was unfortunately not able to provide the original tapes, Tanger has been perfectly restored and remastered by Frank Merritt, at The Carvery, London. CD and digital edition will also come with “Georgy Porgy (Version Disco)” as a bonus track.

Favorite Recordings proudly presents Deux, second album of French Jazz-Funk quartet Aldorande. In this new chapter, the four explorers pursue their interstellar trip on the Aldorande planet, deploying their ever deeper love for the 70's Jazz-Funk & Fusion scene. Extending their first visions of this new world, the bigger-than-life arrangements of this second album reflect again their high attention to dramatic narrative schemes, breezy Brazilian vibes, tempestuous funky grooves and strong cosmic melodies from outer space. Classic and contemporary at the same time, Deux is built for the like-minded souls still looking for the perfect beat.Twisting time and space but never forcing the groove, the band dives more profoundly into the Cortex influence of their compositions, with intense female back vocals fitting perfectly into their cinematographic vision. Like a cry in space, could these esoteric incantations be heard by Aldorande's divinities? Or will they be more impressed by the super-tight rhythm section with its bangin' basslines or an irresistible blend of drums and percussion? In the end, they probably would have to surrender after hearing the infinite echoes of the synthesizers and horns reflecting in the atmosphere. Deep and thoughtful, the travel has only begun but it seems that so much has already been experienced. Breaking the code, they opened the gates to a rebirth. One that could be only accomplished by finding the “Pierre des Mondes”, deeply buried somewhere on Aldorande - the only key to solve the riddle of the groove. Mission accepted.You'll find in Aldorande some of the best French jazzmen including bandleader and founder Virgile Raffaëlli on bass (Setenta & Joe Bataan, Camarão Orkestra), Florian Pellissier on keys (Iggy Pop, Setenta, Cotonete & Di Melo, …), Mathieu Edouard on drums (Chassol, De La Soul) and Erwan Loeffel on percussion (Camarão Orkestra, 10LEC6). On this album, they took the initiative to invite two guests on some tracks: AOR singer Al Sunny and killer guitarist Laurent Guillet (Le Soldat Rose, Setenta).

Belong To The Wind …

For all those who relate “maybe to the wind, because they can feel it, or dirt, because they can touch it. But nothing else.” Like Bobby Cornett (aka Shane), we are all trying to find where we belong.Belong To The Wind marks Forager Records’ debut release: A lovingly curated collection of crooning psychedelic folk and soul songs gathered from American 45s of the 1970s. The compilation features 10 songs from 10 different acts, each with an indelible story of love, loss, loneliness, and an unrelenting desire to shed the confines of routine existence. Meet a man named Denny Fast, perched behind a tobacco stained piano in a smokey Michigan lounge. He’s singing of the faded memory of distant hope and better times past. Listen to a portrait of the heartless Texan, told in arrestingly angelic prose by Connie Mims of St. Elmo’s Fire. Contemplate with Snuffy, the honest musings of a failed and misunderstood outsider, daring to hope for change.Belong To The Wind aims to shed light on the more opaque cuts of these brooding artists. Many of these songs were recorded at the early stages of a career, at a time when experimenting and searching are pursued with reckless abandon. As a result, these songs are aggressively honest and uncompromising. Many have a distinct sense of the lo-fi DIY variety. Others are polished in production. Some are minimal, tentative and vulnerable. What all of these songs share, is a transportive quality. An uncanny ability to take a captive listener on a search for the soul, and a journey into the bellowing fields of easy reflection.Sit back and enjoy a soft trip through the hazy milieu of a loner’s mind.