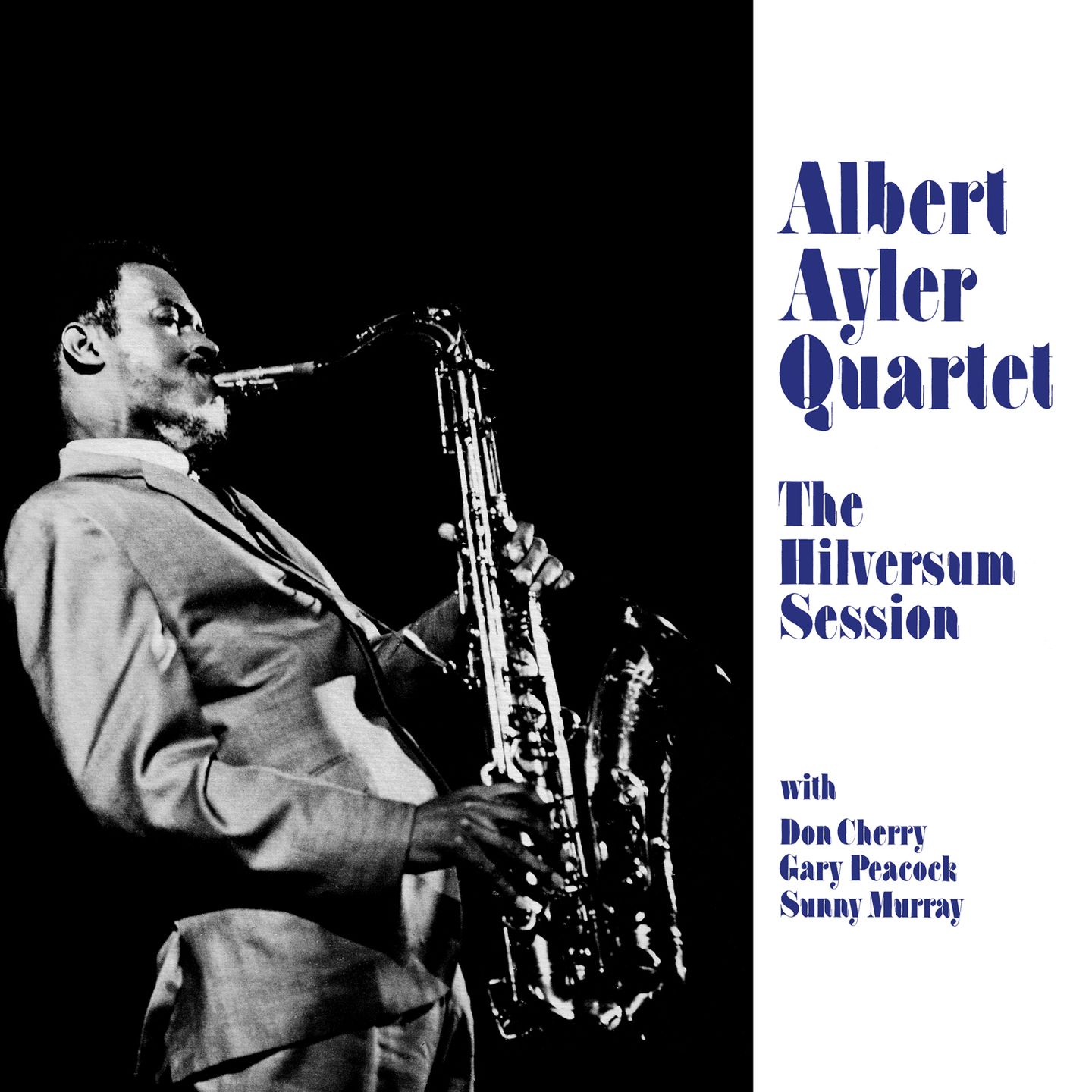 Our Swimmer is pleased to present the first official vinyl reissue of The Hilversum Session in over thirty years.

Jazz iconoclast Albert Ayler took the experimental leanings of contemporaries like John Coltrane and Ornette Coleman as a starting point and then blasted them to stratospheric extremes, creating some of the most polarizing and brilliant music of the 20th Century. In particular, 1964 was a pivotal – and well documented – year in the free jazz artist’s career. After returning to New York, Ayler assembled a brilliant group with Sunny Murray on drums and Gary Peacock on bass, recording Spiritual Unity, Ayler’s first record for the legendary ESP-Disk’ label, that summer.

Soon after that session, Ayler took his trio to Europe where they were joined by cornetist Don Cherry for a tour of The Netherlands, Sweden, and Denmark. The Hilversum Session is a live radio session recorded on November 9th, 1964. At that point the quartet was months into its European tour and the interplay is extraordinary. On classic Ayler compositions like “Spirits” and “Ghosts” the band absolutely rip, with a kind of intuition and connectivity rarely heard, creating some of the most untethered and undeniably powerful music in the history of free jazz.

Ritual Of The Savage…

To celebrate 10 years of this great album INFRACom! is delighted to announce a limited pressing (ltd. editon 500 copies) of Mop Mop ́s third long player. For the first time on vinyl ! Back in 2010 INFRACom! could only release a CD version. For this vinyl release the original studio masters have been transferred to "reel tape" and received a special vinyl mastering for a great analog sound. The original artwork has been transferred to the vinyl version that comes in a gatefold sleeve. After the highly acclaimed "Kiss Of Kali" Mop Mop are back with Ritual Of The Savage, the third studio album, written, arranged and produced by Andrea Benini. Ritual Of The Savage contains twelve tracks of pure hypnotic Jazz, spiritual flavours, exotic Funk and Soul music influenced by Latin and African beats. Collaborations in the album include the amazing UK vocalist Miss Baby Sol (backing vocaling for the likes of Amy Winehouse, Joss Stone, Paloma Faith, Nate James), veteran Jazz crooner Alan Farrington, Down Beat critics poll winner Gianluca Petrella on trombone, the Italian vibraphone Star Pasquale Mirra, the Voodoo sound of Guglielmo Pagnozzi on clarinette and alto sax, percussionist Danilo Mineo and Andrea Benini's co-writer and arranger Alex Trebo on piano and keyboards. Ritual Of The Savage is an album with the philosophy of a soundtrack where the main character is a modern Savage who is searching for a perfect land where music is the only law. He starts his journey after "The Return Of The King", the album's opening track, going to an unknown "Destination" where Jazz meets Funk. Will the Savage be able to reach his goal? Nobody knows. But as the last album's track "Aria" suggests he will land in a space where everything is harmonious. The result is surely mindblowing with a flowing tracklist which sequels as if to tell a story. This album is made for the selective and open mainded music heads and dj's; vintage elements are mixed through a modern way of production and beats are generated by acoustic drums and analog drum machines. As Andrea Benini suggests on "Ritual Of The Savage"'s lyrics : "...Step back, burn all your money, give up to your power silks and chase real pleasure".

Since the release of his 2 first albums on Favorite Recordings, Lucas Arruda has quickly established himself as one of the most talented young artist and composer from Brazil. His music is filled with fusion style, mixing influences and elements from his Latin musical background, with his genuine admiration for Jazz, Soul, Pop and Funk music.In spring 2015, it was also not surprising to find Lucas Arruda back with a new LP called Solar, receiving great supports and feedbacks from international media and tastemakers. One of the highlight of the album was the song “Melt the Night”, on which Lucas teamed up with legendary producer Leon Ware, reminding his collaborations in the 80s with Marcos Valle, when they perfectly merged together the sophisticated Boogie and AOR touch from California, with the blazing sense of rhythm from Brazil.Today Favorite Recordings proudly present Onda Nova, new and third album by Lucas Arruda. Mostly written, composed and arranged by himself, Lucas however teams up on a few tracks with his old mate Fabricio di Monaco (Modo Solar), his brother and musical partner Thiago Arruda, who recently joined Ed Motta’s live band, or Gaël Benyamin, also known as Geyster, who brings his longtime “savoir-faire” and skills for writing and composing AOR and WestCoast music genre, and who share this deep passion with Lucas.Onda Nova is therefore pursuing the music direction set with Solar, mixing touch of Blue-Eyed-Soul, Pop, Soul and Brazilian styles together, and influenced by the path of legendary Brazilian producer Lincoln Olivetti, who recorded some of the biggest stars of Brazilian music (Marcos Valle, Jorge Ben, Tim Maia…).In Lucas words: “In this record I really wanted to honor Robson Jorge & Lincoln Olivetti. They are the main influence on this record. We recorded the basic tracks for the album in the same studio that Lincoln Olivetti did his last works. So, this was very important to capture the true essence of Brazilian Funk/AOR tradition. Hope you guys enjoy it!”

Sometimes there’s a huge talent out there and you desperately want the whole universe to discover it. That’s pretty much the story of Parisian label Chuwanaga with young French artist Koji Ono, composer and producer of these four precisely crafted gems, recording everything by himself. Brilliantly mixed by Greita from Disques Flegon, his first EP Incognito is the product of a lot of influences, from Metro Area vibes to the original Britfunk sound. With an inner sense of elegance in the arrangements - something we may link to his Japanese heritage? - The whole EP brings musicality back on the dancefloor. We believe this could be the beginning of a great story for this talented musician, Koji Ono emerging from the incognito shadow to the whole light of the world. Don’t miss out!

A revival, a resumption, a revelation… call it as you wish, Ray Stephen Oche is now delivering his musical message: fire, fun, fury, talent and magic. This is music from the African heartland, dense, intense, a genuine fermentation of black African experience in sound, a translation of Ray Stephen’s essence into a soothing, meaningful balm for your eager auditory faculties. Such is this album of “dedications”.

Betino's Records proudly presents its third release: an EP by the very sharp collective The Big Hustle. The band founded in 2014 by bass player and composer Sébastien Levanneur, brings together 70's old school funk with the hippest actual sound with influences spanning from Steely Dan to Snarky Puppy, from Mandrill to Lettuce and from Herbie Hancock (Manchild era) to Soulive. With mighty horn players, a rock and funky rhythm section, and percussions added to it, The Big Hustle’s music has a very large variety of sound landscapes. Still, the music never loses the groove and always stays close to the funk.The A side opens with "Afrorever", a tribute to African culture and music. The guest of honor on this song is legendary Malian musician Cheick Tidiane Seck, longtime partner of Salif Keita, and collaborator of Joe Zawinul, Carlos Santana and Damon Albarn to name a few. After Cheick’s introduction, the songs jumps into a typical afrobeat vibe featuring a tight and powerful horn section, suddenly breaks into an electro funk groove and ends in a furious percussive party. Second track on the A side is "Faure is the Magic Number". It is dedicated to Thomas Faure (co-composer of the track) and François Faure (both featured on this song on tenor sax and keyboards respectively). This piece displays the band’s ability to blend jazz-funk groove with a heavy hip-hop beat. Kind of DJ Premier meets Steely Dan. The B side starts with "Afrorever (Sun's Up Mix)". Through this mix, one can acknowledge instantly Olivier Portal's touch. From the very first chords, he conveys us into his realm blending warm and melancholy keyboards with an old school deep-house rhythm pattern.The fourth track is called “1, 2, 1, 2”. It is a purely improvised moment in the studio while the band was sound checking before recording with special guest rapper Raashan Ahmad. Nicolas Gueguen had the good idea to press the R button and what you hear is basically what happened afterwards. Enjoy!