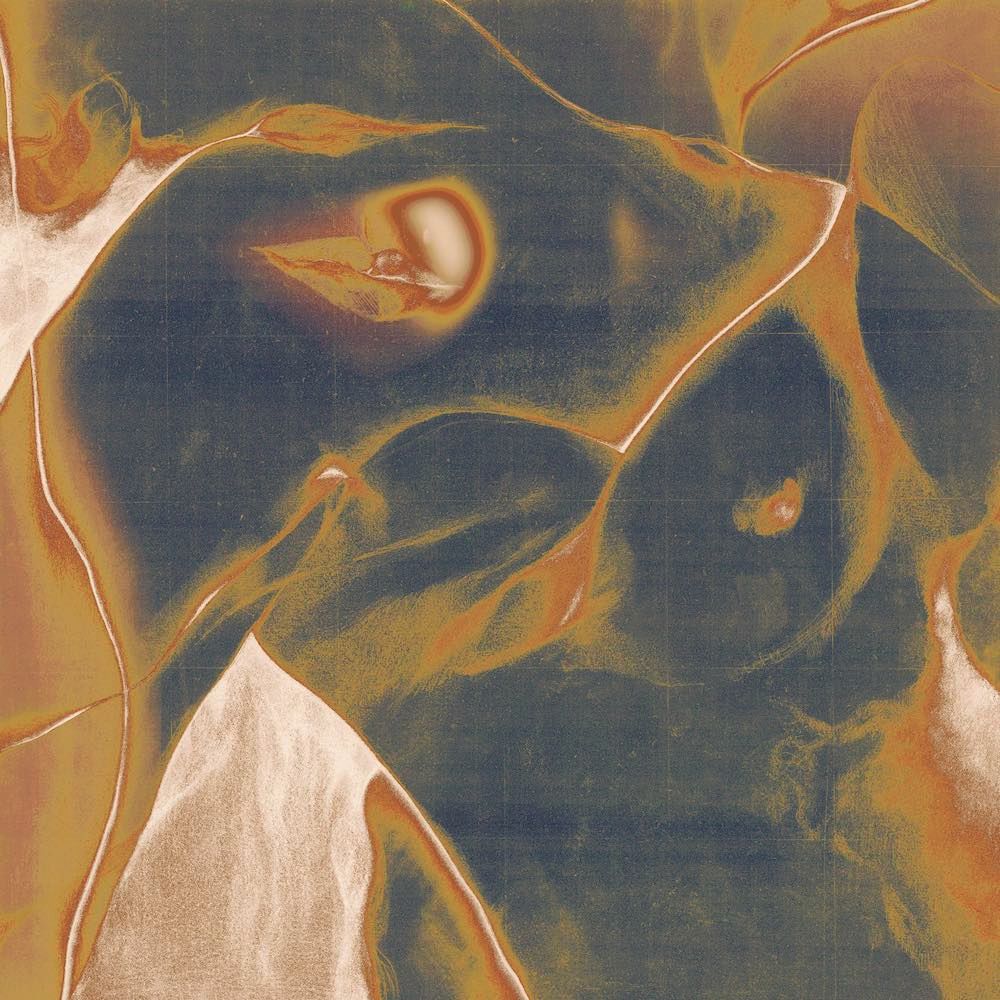 True concept albums are actually few and far between. While it can be said that The Who’s Tommy and Quadrophenia, or Pink Floyd’s The Wall were designed from the ground up, that’s not necessarily the case for equally mythical, yet composite, albums such as Bowie’s The Rise And Fall of Ziggy Stardust…, or Lou Reed’s Berlin. In France, the genre established its pedigree in the 1970s with Serge Gainsbourg, then in the early 1980s with Léo Ferré. Cri d'amour by Mélanie Chédeville adds to this list of albums that tell a story through characters.

Cri d'amour was produced in a seaside setting, which may explain its flowing, organic character. It is all by herself that the violinist-by-training composed, wrote and arranged this collection of string-drenched songs that recall Jean-Claude Vannier’s work for Serge Gainsbourg. The latter would undoubtedly have been impressed by Mélanie’s fine-cut lyrics and melodies that are as raw as they are sophisticated, vocalized in a sprechgesang recalling his own. The deliberately retro palette, up to the bass sound so typical of 1960s English rock, betrays an artist indebted to the creator of Bonnie & Clyde and Initials B.B. through a sensual, clear tonality. Yet, polyrhythms borrowed from the late afro-beat legend Tony Allen, and the touches of guitar, piano, percussion and synthesizers distilled here and there by Éric and Mélanie, end up giving the whole affair a resolutely atemporal color.

Mélanie was sixteen with a head full of Beethoven and Brahms when she succumbed to an unexpected fascination for the world of Éric, a pianist, composer and sound engineer, who regularly delivered scores for Marc Dorcel’s X-rated films. She evokes him in L'Alpha-bêta and Le Pornographe, through whispered choruses that would suit the late Julee Cruise or Vanessa Daou to a tee, and explicit allusions to a “sword of Damocles” of “XXL” dimensions.

Some may find this album old-fashioned, which, far from being a flaw, is a credit to the fine musician that Mélanie is. Others will call it a charming album, which is not a bad way to describe it, provided that it is a powerfully relentless charm.

It’s Not Too Late

Split Single from the garage combo of The Panturas and Sundancer sung entirely on their regional language. An exclusive 7” split from Indonesian surf-garage-rock behemoth The Panturas and Sundancer, hailing from Jatinangor and Lombok Respectively. It was the first series from their upcoming “"Singel Klub" series."Lasut Nyanggut" by The Panturas their first song sung entirely in Sundanese language. The band appointed Ricky Virgana from White Shoes and The Couples Company fame to be their producer, and successfully produced a garage psych-surf-calypso with a mixture of traditional oriental sundanese pop aesthetics. The lyrics of the song itself paints a picture of someone fishing.The title itself is a popular term among fishing enthusiast on the western parts of Java.“Dedare Tanjung” or “Gadis Tanjung” roughly translates to “the girl on the cape”, was inspired from “Dark Eyes” a russian folk song and Ismail Marzuki’s very own “Panon Hideung” which is a song sung in Sundanese language. The band translates the song to their own mother tongue language which is the Sasak, a language that the band originated from.

In the '70s, Yan Tregger was far to believe he would become one of the most emblematic artists in the "sound illustration" scene. Yet today, his albums are highly coveted by "diggers" all around the world. At the time, nobody paid much attention to all those records that were classified as sound illustrations, or library music. Yan Tregger started out in this environment in the late '60s. He was remarked after making several recordings for the credits of TV shows, and received a proposal to compose his first album. It was a small label (Marignan), the sleeve design was skimpy and the track titles were bizarre... Yet when you listened, the sound was seriously groovy. The album was called Freezing Point and a mere 300 copies were pressed.Thanks to this first test, other "illustration" professionals were convinced by Tregger’s qualities. During this period, there was no lack of work but there was no glory on the program either. In the '70s, many different labels such as Neuilly, Montparnasse 2000, or the Italian CAM label, called on his services. Shortly afterwards, Philips released two of his records under the name Major Symphony, and then Polydor issued the two M.B.T. Soul albums, including one international success, "Chase".Up until now, despite the interest shown in his discography, no reissue had been undertaken - an omission that has just been fixed thanks to the release of a compilation that we are pleased to present. Let's start with the main information: the tracks included on the album were selected jointly by a number of collectors and Yan Tregger himself. The selection is rich and surprising. The A side is more "seventies", with an instrumental pop style and a psychedelic vibe, while the B side is more rhythmic and melodious, corresponding more with the funky disco moods of the eighties.

Favorite Recordings presents this new official album reissue of The Parker Brothers: Maybe one of the best Blue-Eyed-Soul/Modern-Soul private-press albums you can imagine, surprisingly highly unknown and underrated.Produced in 1981 by George P Grexa and released in a private-press version on his label Crown Vetch Enterprises, this album is filled with memorable material from the first note to the last, mixing Modern-Soul, Boogie, cross-over Jazz and Rock elements, for a result reminiscent of the WestCoast music’ golden years, however being recorded in Pittsburgh.As one of the longtime favorite collectable piece for Charles Maurice, it’s a real honor and proud for Favorite Recordings, to finally officially reissue it from the original master tapes and for the first time on vinyl.

Favorite Recordings proudly presents Time to Decide, The first album by Al SunnyAl Sunny is a young composer emerging from the French soul music scene. Soon after learning the guitar, he started composing and became involved in numerous projects and collaborations. Al has been influenced by pop, rock, and electronic music, always with a foundation in the “Black” and “Soul” sound.During his conservatory studies, he refined his knowledge and confirmed his desire to write and compose. The will to establish himself on a solo project became stronger and stronger. He quickly discovered deep inside himself the music that he truly loves, inspired by artists such as Tim Maia, America, Al Green, and Al Jarreau. Thru his guitar, he gives birth to the majority of his compositions and always seeks to bring the melody of his songs to the forefront. During his studies he met musicians including Florian Pellissier, then professor at the conservatory and a confirmed pianist who worked on various projects such as Guts, Anthony Joseph, Florian Pellissier Quintet, and Shola Adissa.It's then thanks to Florian that Al Sunny meets Pascal Rioux, founder and A&R of Favorite Recordings. Immediately seduced and impressed by his talent and the various demos that he listened to, Pascal invites the young musician to collaborate and produce an album within Favorite Recordings. Together they agree on a musical direction looking towards the West coast movement of the 70s and 80s. This direction includes influences like Steely Dan, The Doobie Brothers, and Ned Doheny, of whom Al Sunny covers the classic “Get It Up For Love” on the new album.With Time To Decide, Al Sunny shows us the premise of his music style, infused with Blue-Eyed-Soul, Pop and Folk. Written and composed by himself, it’s in close collaboration with Florian Pellissier that his songs came to life. Under the guidance of Pascal Rioux and Favorite Recordings, the production of this album ensures a sound and a final result worthy of the best classics of the genre.

The French-Afropean duo is back with a new funky masterpiece album! DjeuhDjoah & Lieutenant Nicholson are French composers and afro-soul singers. The duo are creating a new vibe with French sounds and mixing it with Jazz, Afrobeat, Electronic and Soul. T’es qui ? was their first album released in 2015 and re-released a year later under the name Remets t'es qui? It was result of an intense collaboration that has lasted many years, on stage and in the studio. They call their music “Afropean songs”, a collection of Jazzy-Pop melodies, Afro-Soul and Funk arrangements.This new album has 15 songs, and features a tribute to the famous poet Aimé Césaire on the title. The Antilles are also honored with creole lyrics, and if you listen carefully – you’ll hear them distilled within the album. La Montagne Pelée's eruption in 1902 is evoked under the prism of “August Cyparis”, one of the three survivors. The rhythms are tight and focused, with some Antilles, but also Detroit elements thrown in, accompanied with a strong horns section, vibraphone and analog drums. There are lots of echoes from the era of Jazz funk and the lyrical French Mode, mixed with some slightly warmer currents that show their wider love of modern funk and eclectic tastes. It is a unique sound, an original recipe, using French wordplay with a universal message. Last summer, they presented the now critically acclaimed first single “El Nino”, an Afro-Funk gem about climate change, and “Fontaine”, an Afro hit with a great combination of analog take and electronic dance floor ingredients. With massive support from national radios and prestigious international DJs such as Gilles Peterson, Aimez ces airs could be one of the Top funky albums of 2019!Limited press on a deluxe double vinyl cover designed by the artist Felix, mastered by Dj Vas.

When experiencing zero gravity in a space station, looking back at Earth-as-one, most astronauts feel dizzy. A near revelation, this sudden awareness is named the “Overview Effect”. When they eventually come out of these periods of aphasia, they often recall having heard "strange music”, similar to the music they claim to have heard on the hidden side of the Moon. Smagghe & Cross's second collaboration (recorded before the MA album, released last year on Often) is the first attempt to recreate this celestial music.For the past two decades, Ivan Smagghe has perfected the art of making spaced-out clubbers dance, has ridden a Fine Line and run his label Les Disques de La Mort. Rupert Cross is a London-based composer who has worked with Michael Finissy and Julian Anderson as well as writing music for television and theatre.Before/after MA, an album which sat on the fringes of experimental music passed through an industrial particle accelerator. S&C give you the tracks codenamed Timothy Dalton (according to Ivan, "The laser sound in the track reminded us of Flash Gordon"). Neither pop, nor psychedelic, nor ambient, nor house, nor techno, nor post punk nor even new wave are spared, but none are singled out. To nurture this proto-album, the duo also called upon the talents of Tim Felton, the outstanding guitarist from the cult band Broadcast.When listening to Timothy Dalton, the temporal and stylistic boundaries disintegrate to give way to all sorts of speculation: imagine the beardies from Tangerine Dream being kidnapped by Soft Cell, C86 and 1988, the Silver Apples composing a space opera with the help of an electro cardiogram monitor. Or the Wizard of OZ reviewed and reworked by Psychic TV. Eight tracks take us from the New Orderey beaches of Ostend to the rings of Saturn, and gradually unfold before our eyes like a machine to travel through time and space. So what if Timothy Dalton was a one-way ticket to the Twilight Zone?