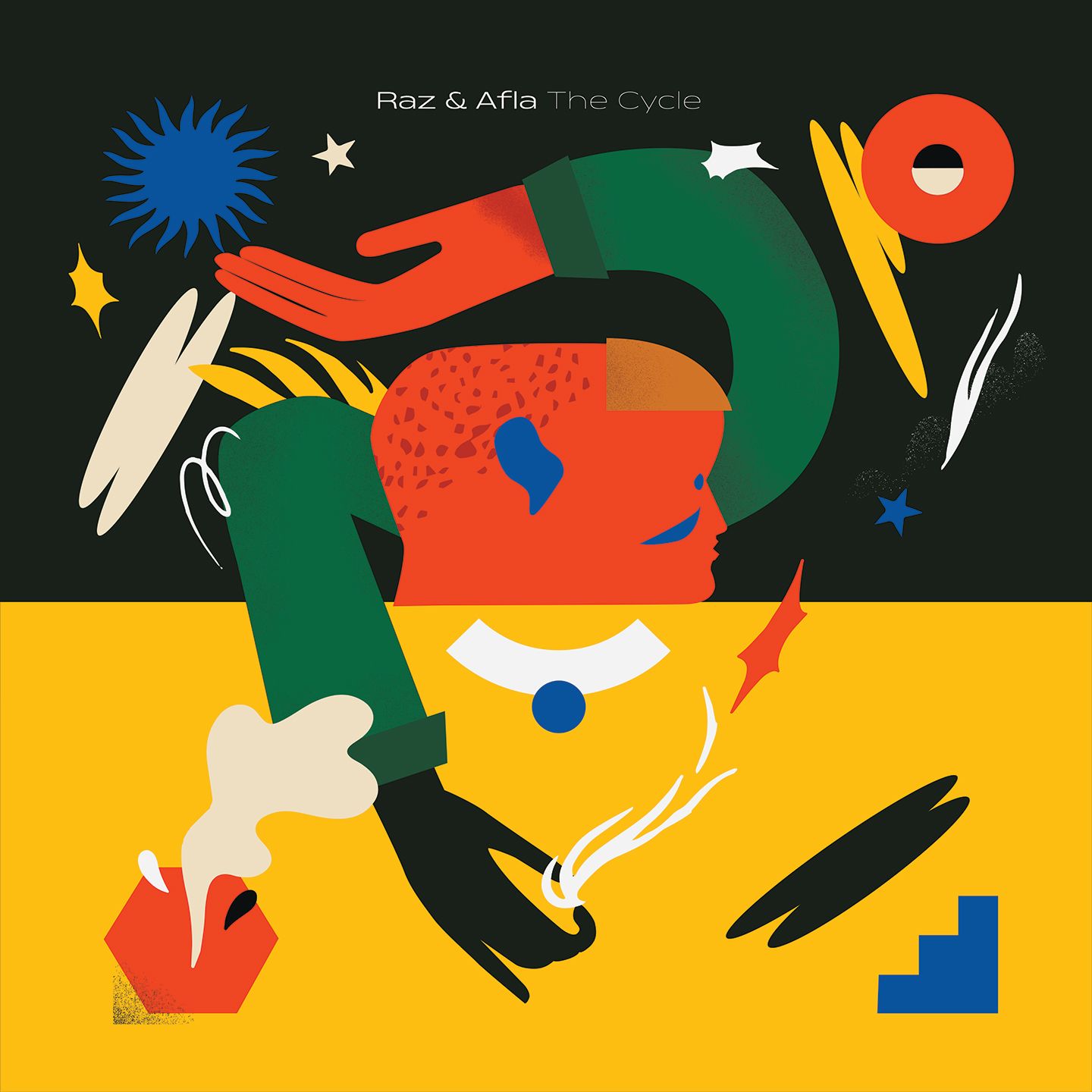 Chemistry and the depth of connection formed when two people bond intuitively is the crucial foundation of a successful creative partnership. For Raz Olsher & Afla Sackey, this intimate connection fuels a dynamic and effortless musical relationship that has resulted in a stunning debut LP.

Originally from Tel Aviv, Raz has been based in London for most of his adult life. An awardwinning, multi-platinum producer, his repertoire includes a broad range of solo electronic music productions while also lending his refined ear to composing and producing for other artists including Basement Jaxx, Sam Lee’s Mercury-nominated album and Lamar, among many more. Afla’s Ghanaian heritage permeates into everything he does, invoking the deep ancestral roots of his homeland. His background as a session musician for artists such as Ginger Baker, Sun Ra, Oren Marshall, Osibisa, Ibibio Sound Machine and later, as a dancer, embodies his lineage.

It was inevitable, then, that their connection would lead to a full-length collection of their music. From funk-fueled open ‘Survive’, to its politically astute title track The Cycle condenses Raz & Afla’s magical chemistry into a collection of music that is authentic, compelling and contagious in its enthusiastic energy. You’ll hear ancestral funk on ‘This Cycle’, contemporary highlife with ‘Check Yourself’, cosmic Afro-electronica on ‘Mofanya’ and jaunty grooves on ‘Shall Prevail’, simply pure good vibrations across the eight-track LP, which marks the start of the next phase of Raz & Afla.

This is the twosome expressing themselves to the world; vulnerable, truthful and exposed, it’s a personal statement that will resonate with listeners all over the world. Through the universal language of music they communicate sincerely, with music that has pure intention. Dance wildly, pay close attention to the lyrics and let the spirit of Raz & Afla transport you away from everyday life into another dimension of rhythm and sound…

Vaudou Game is a contemporary live band of 6 members playing an authentic Togolese funk based on voodoo chants scales, and led by Peter Solo, a singer and composer born in Aného-Glidji (Togo), birthplace of the Guin tribe and place of the voodoo culture. He was raised with those traditional values of human and environment respect.Apiafo is a 12 tracks album, entirely recorded, mixed and mastered with old analog tapes, and played with vintage instruments, recalling the sound of bands like Poly-Rythmo De Cotonou or El Rego! Peter Solo invited his uncle, Roger Damawuzan, famous pioneer of the 70’s soul scene in Togo, to sing on “Pas Contente” & “Wrong Road“. The result of their collaboration is without a doubt two amazing future dancefloor classics! The idea of integrating these haunting lines, sung in honor of the Divinities, to an energetic 70's Afro-funk style, was, in Peter Solo's mind, an obvious extension of the analogy he found between the voodoo tradition and trance inducers such as Soul, Funk, as well as the Rhythm ‘N Blues of James Brown or Otis Redding.Vaudou Game will be touring all over the world next year promoting this new Afro-Soul classic album!

Chief Udoh Essiet believes in rhythm. He serves it Hot-and-Spicy on his new album Afrobeat Highlife Crossing, from the depths of his soul to the beat that emanates from his hand-made antelope-skin congas and talking drums from his native Nigeria.Chief Udoh is a veteran artist, singer, songwriter and virtuoso percussionist. His musical journey took him from the traditional rhythms of his village to Swinging Lagos in the 70s, where Udoh apprenticed with Dr. Victor Olaiya’s Highlife Band while still too young to reach the tops of the congas onstage. (They stood him on a Coca Cola crate!) He has personally worked alongside the biggest artists from Nigeria in the 70s and 80s, including the legendary Fela Anikulapo Kuti, creator of Afrobeat, at the height of his fame.Afrobeat Highlife Crossing has all the elements of these Old School styles, effortlessly blending the essence of Afrobeat and Highlife grooves, resulting in a sound that’s purely original. The percussion is out of this world, the bass is melodic, the horn arrangements are next level, the BVs are perfect and the ‘Pidgin’ language Chief Udoh sings tops it off with some Nigerian seasoning, like a dash of Hot Pepper on Stew!His lyrics speak the cold-blooded truth, telling us to look inside ourselves and fight against corrupt governments that keep getting us into corporate-sponsored wars, leaving innocent civilians to live with the consequences.His label Uwem Music’s motto is “Right now is the best time to play the record” and we agree!

Completing the recent LP reissue of Black Voices by Tony Allen, Comet presents a 2 tracks remix EP by Folamour and NIT. The two rising French producers provide great new versions of “Get Together” and “The Same Blood”.FOLAMOUR: Behind this surprising name is hidden one of the main House producer and DJ from France. Label manager of the amazing record labels Moonrise Hill Material and FHUO Records, the artist using lots of different aliases has already burnt most of the best dancefloors in Europe and beyond. 2017 has been an important year in his career with releases on Church and Glitterbox labels, and a debut album on Moonrise Hill Material and Classic Music Company, after a whole series of successful records on quality labels such as All City Records, Fauxpas Musik and Sleazy Beats Recordings. Working on his second album after two EPs upcoming soon, it makes no doubt that it's only the beginning for Folamour.NIT: NIT is the studio project of the French musician Corentin Kerdraon. After several years working at radios in Paris he released a first EP called Dessous de Plage in May 2017, displaying condensed grooves with multiple references, from Jean-Claude Vannier to Dam Funk... Alternating Pop projects and more experimental compositions he's present on different musical scenes as keyboard player and producer. He has just recorded an EP for the American singer COLA BOY released in spring 2018 on the French label Record Makers.