Various
30 Years – We Couldn't Save The Entire Planet, But We Still Like To Save Your Soul 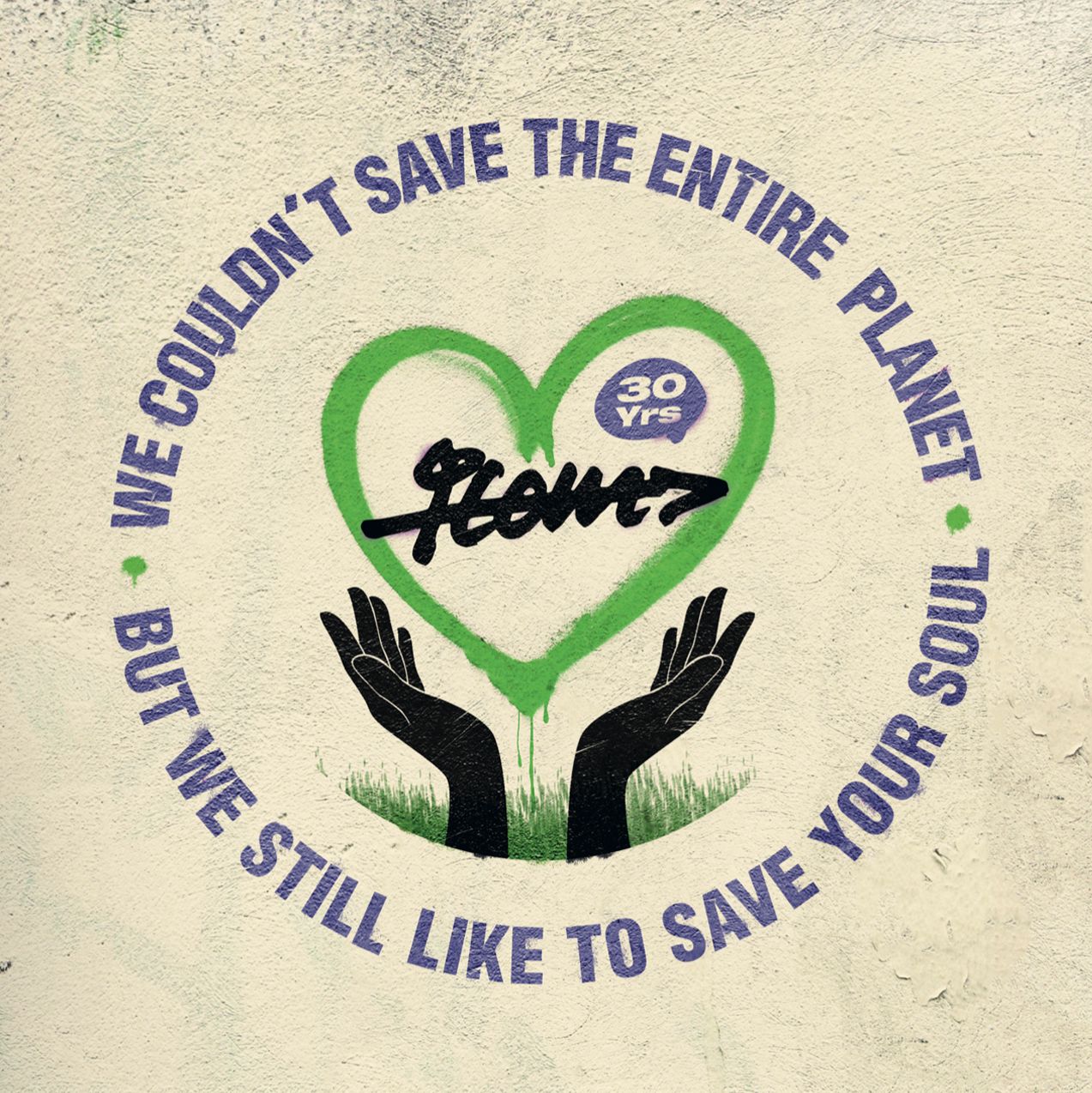 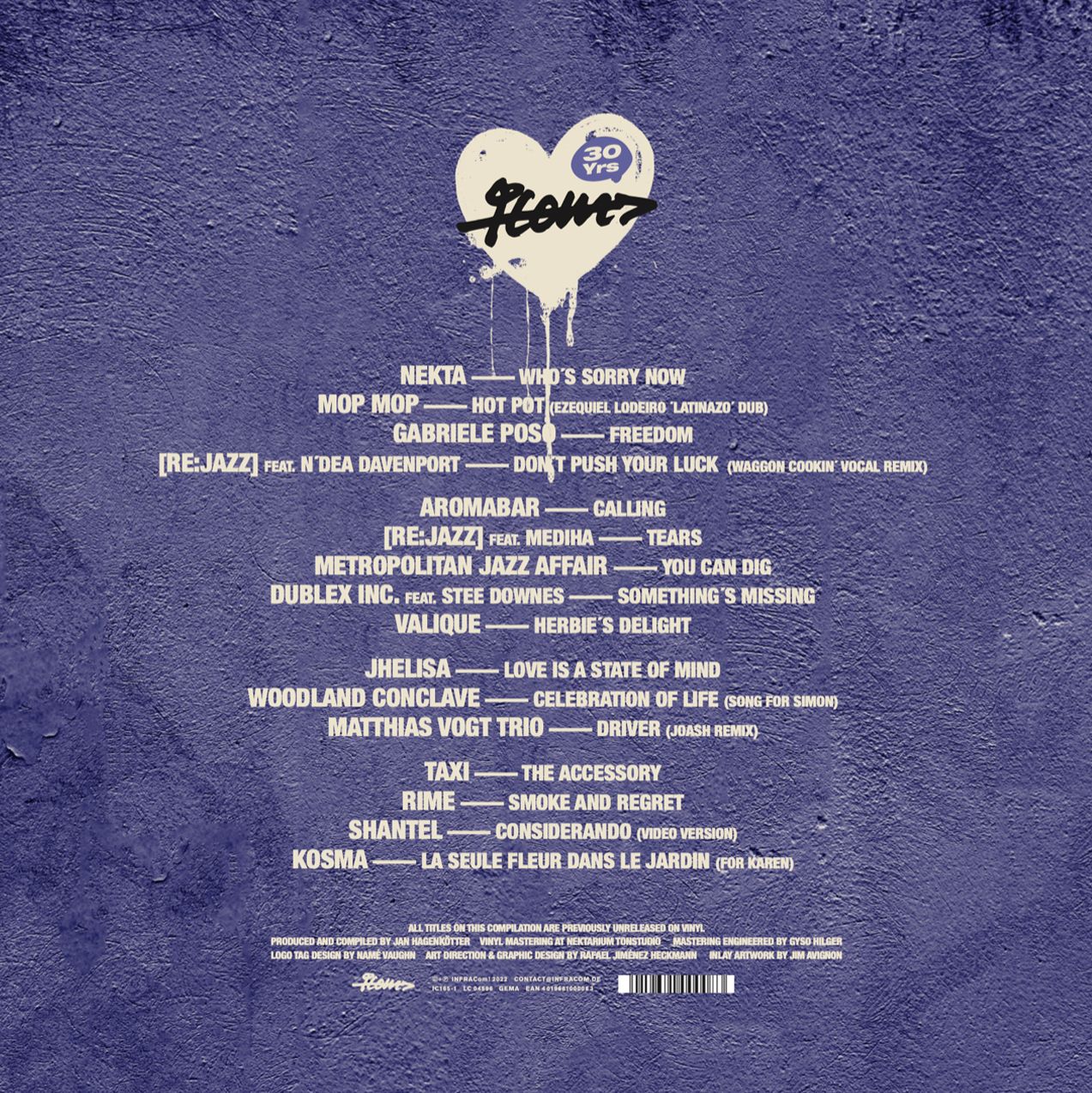 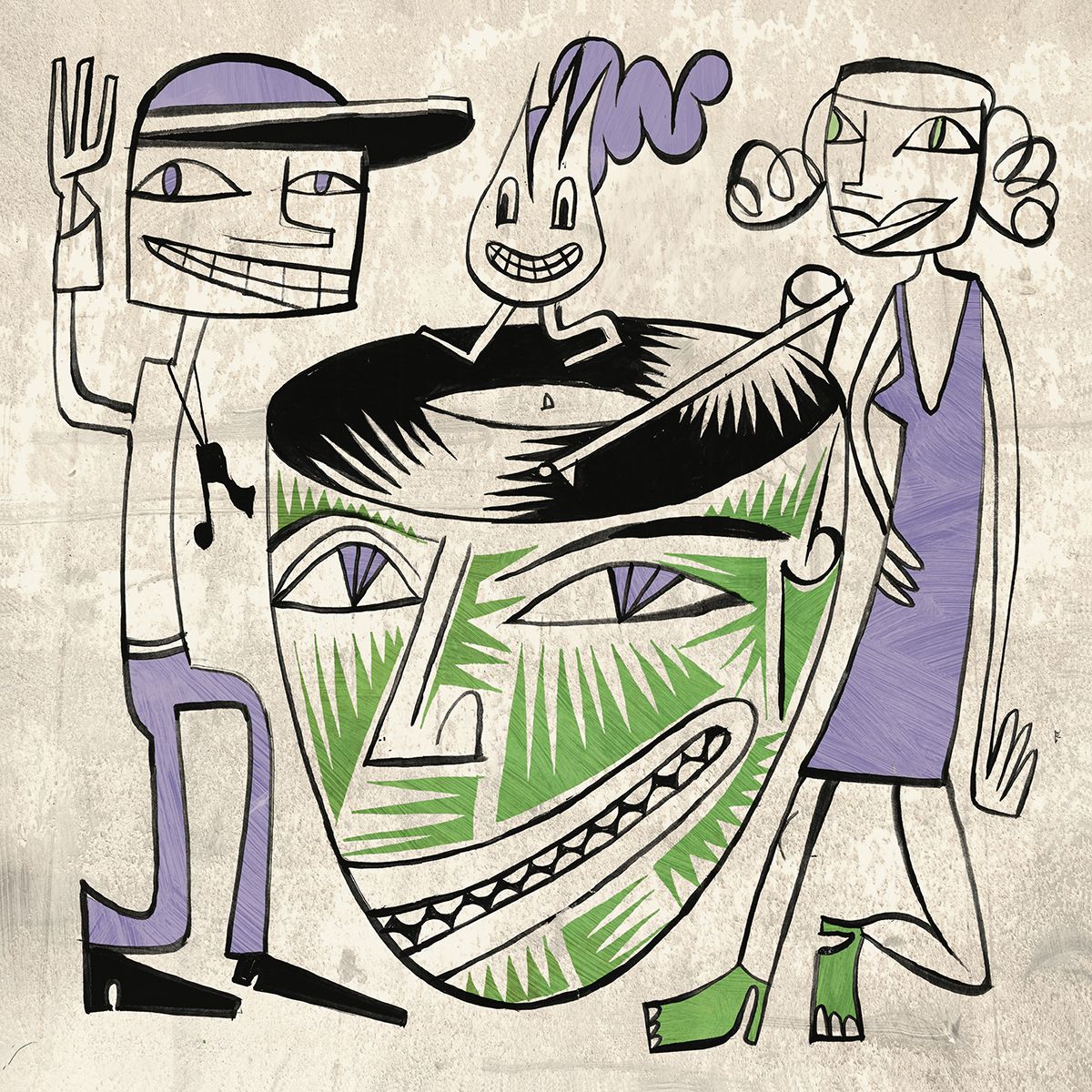 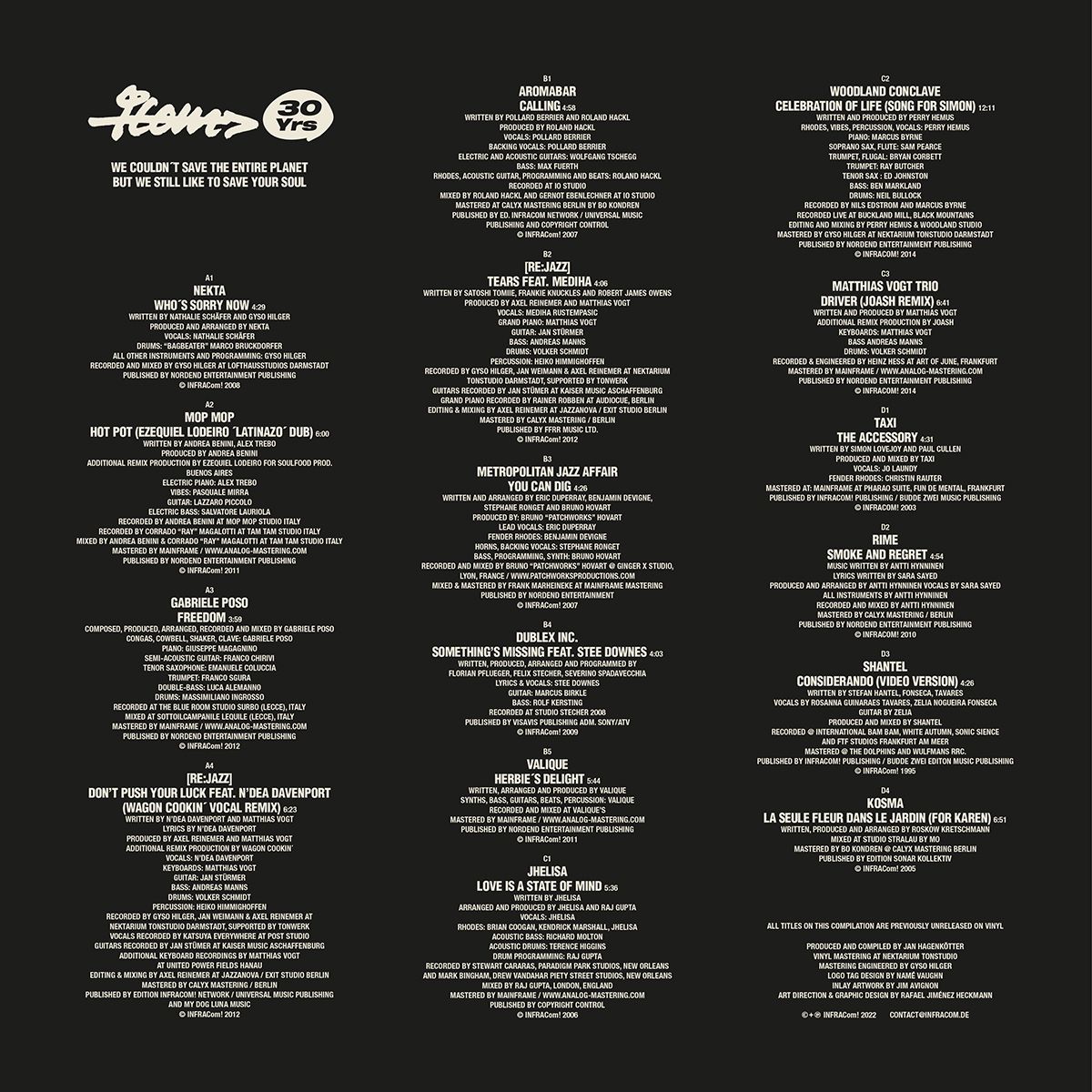 INFRACom!, one of the longest operating Independent labels in Germany, celebrate it´s 30yrs anniversary with a vinyl compilation consisting of tracks that have never been released on vinyl before. Label co-founder Jan Hagenkötter handpicked these from various artist in the catalog, true to the spirit of the label and its operator – We couldn´t save the entire planet but we still like to save your soul.

The artwork was once again designed by Rafael Jimenez Heckmann, a well-known graphic designer from Offenbach. He is responsible for most of the artworks and designs on INFRACom!... his covers have already been awarded several times e.g. in Lürzers Archive and others.

The inlay was designed by the long time friend & well known artist Jim Avignon. In the nineties before Jim went to Berlin and New York to get world famous he lived in Frankfurt for a few years and drew and partied a lot with Jan Hagenkötter & Namé Vaughn…the two DJ´s, friends and founders of INFRACom! He even contributed a song to the very first INFRACom! production. Since that time they cultivate a lovely friendship and Jim was happy to contribute an artwork to this anniversary release.

Most of the tracks included on the compilation were released only on CD and then digitally in the so-called 2000s or noughties, as it was very difficult to release any album on vinyl during that time due to the situation in the music market while the transition from physical to digital products and the piracy phenomenon. Fortunately, today the different formats can coexist again.

INFRACom!, once started locally in Frankfurt with artist like Shantel who released his first recordings on the label. He is featured by a collaboration with the Brazilian duo Rosanna & Zélia. Soon INFRACom! expanded to an international platform for artist from all over the world like Jhelisa (USA), Mop Mop & Gabriele Poso..both from Italy, Metropolitan Jazz Affair the brainchild of French producer and musician Patchworks, Taxi from the UK, Rime from Finland or Aromabar from Austria…all with different styles of music.

The vision of the two founders Jan Hagenkötter & Namé Vaughn was and still is artistically oriented and has never favored just only one style of music.
The roots of INFRACom as a label are based in the various form of black music culture - conditiopned to the influences and personal history of the two founders - but also deeply rooted in the club and DJ culture and various forms of electronic music. The compilation can only show a small glimpse into the universe with tunes that stand the test of time.

One of the best examples is Matthias Vogt with whom the label has a long standing collaboration and who just this year released the album PIANISSIMO on INFRACom!. He can be heard with his Matthias Vogt (Jazz) Trio in a cinematic remix from Joash and two pieces by the highly successful [re:jazz] band which he leads.

With Valique we are happy to feature a Belarus/Russian artist on the release these days….one who already showed ten years ago on his album artworks what he thinks about the politics of his government. As an open minded label and ethnical diverse ppl. we think “Fuck Putin and his disciples and like-minded people, but let's not condemn all Russian-born people. Some prefer to worship Herbie Hancock...like Valique and we want to support that.”

With Nekta, Dublex Inc. feat Stee Downes and Kosma this release features three more artists from various regions in Germany, each with their great moments.….and last but not least the mysterious Woodland Conclave (UK)…a waltz and a story yet to be told and hopefully will be…on INFRACom!…in the near future!

Metropolitan Jazz Affair - You Can Dig

Jhelisa - Love Is A State Of Mind

** Available exclusively at The Pusher **Favorite Recordings presents Remixes by Voilaaa, a new EP built with exclusive versions of some of its biggest hits. Known for its Afro-Disco sound and strong dancefloor-friendly festive bangers, these new mixes bring another light to the successful project of Bruno "Patchworks" Hovart.On A Side, Voilaaa asked famous Brooklyn-based producer and remixer JKriv (Razor-N-Tape) to provide even more club energy to "Ku La Foon (feat. Lass)”, originally released on Voilaaa's third and last album. The result is a powerful bomb that won't give any rest to the crowd.The tracklist goes on with "Ben Bene La (feat. Lass)” reworked by Patchworks himself in a very Latin way, taking inspiration from the NY scene and its dancers, "Spanish Harlem" and Mongo Santamaria. You've got to play it loud and we're pretty sure you'll see some special moves on the dancefloor.On B side, you'll hear another Patchworks remix, this time with probably one of Voilaaa's biggest hits, "Spies Are Watching Me (feat Sir Jean)”. In the footsteps of Moodymann, Masters At Work or the UK Garage scene, Patchworks delivers here some of his classic house music energy. You may know he started his career with house music: he transformed this anthem into a proper deep house cut with the same passion! Finally, Voilaaa remixed himself! Working on "Tu Mens Devant Moi (feat. Ramatou Traore)”, Voilaaa carries the arrangement closer to the Angolese and Cape Verdean sound, reminding also the sound of Super Mama Djombo from Guinea Bissau. A tropical cut that will bring more and more sunshine to the club.

Technology For The Afterlife

Technology for the Afterlife (aka Victor Groth) is an ambient/new age artist from Denmark, set to release his debut album Interpretations of Eternity on Cracki Records in the spring. The instrumental album explores the frontiers between faith and knowledge, consciousness and oblivion, past and future. It is about longing for a time when rationality and spirituality are not arch enemies, but one and the same. When there is neither science nor religion: Only mythology.

Recorded in 1982, Following The Light is the third album british composer Albert Alan Owen recorded for the Apollo Sound Label. Originally a Library oriented Music label, Apollo Sound by the mid 70s commissioned contemporary musical pieces from new composers, aiming presumably to provide atmospheric backgrounds for film, television and advertising, and to feed the burgeoning demand for ‘New Age’ music. Therefore comes Following The Light.While certainly melodic, Owen’s music makes no concessions to mid-afternoon mindfulness or commercial use and reuse. Instead, Following The Light - whose title is taken from the Tao. Number 27 - is a deep and immersive listening experience, clearly the work of a singular musical imagination following its own rules in its own way. With the help of Katherine Sweeney on violin and Milada Polasek on electric piano and organ, Albert Alan Owen recorded Following The Light in “live” condition, taking profit of a strong use of the digital effects which were in its infancy at this time; the music was written to make the most of what technology was available, resulting a singular piece of music of sheer beautyThe record demands to be considered as a stand-alone unit, its three sections unfolding elegant and propulsive by turns, as reoccurring themes answer each other through the layers. There are echoes of Reich and Riley in the use of delay, that warm rolling repetition and those bass pulses. But this is not in the service of a system. There is something more lyrical, more humane at work in the music.With Following the Light, Albert Alan Owen has given us a record that stands outside of time and place, it’s familiar elements made strange and new, all bathed in magic hour light.

40 years after the original release, Nanga Boko Records is very proud to present you the official reissue of De Bonaberi A Douala, the first album from the Cameroonian musician Nkotti François and his band The Black Styls.Limited edition, high quality remastered sound, includes a very detailed biography in both English and French languages with exclusive pictures for a better comprehension of the work of the musician, and a voucher to download the album in a HQ digital format.Approved by the artist himself, 100 % legit, all 8 tracks are under exclusive license of Nanga Boko Records.

After "Folie Douce" his first single released in 2018 on Cracki Records, Braque de Weimar finally releases his first EP! Between French boogie, rap and electronic music, Braque navigates between genres without ever forgetting to make us dance!