Technology For The Afterlife
Interpretations Of Eternity 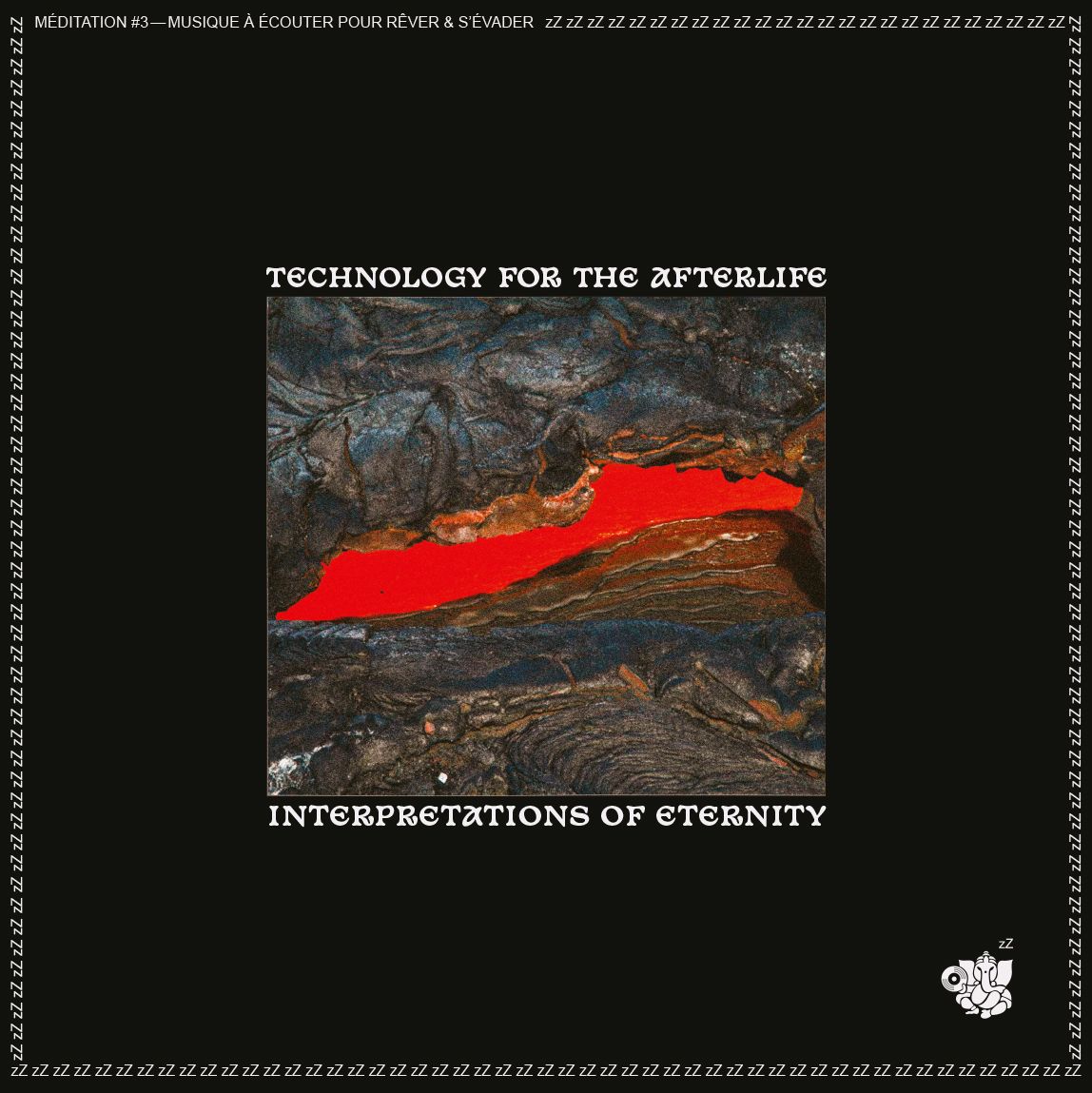 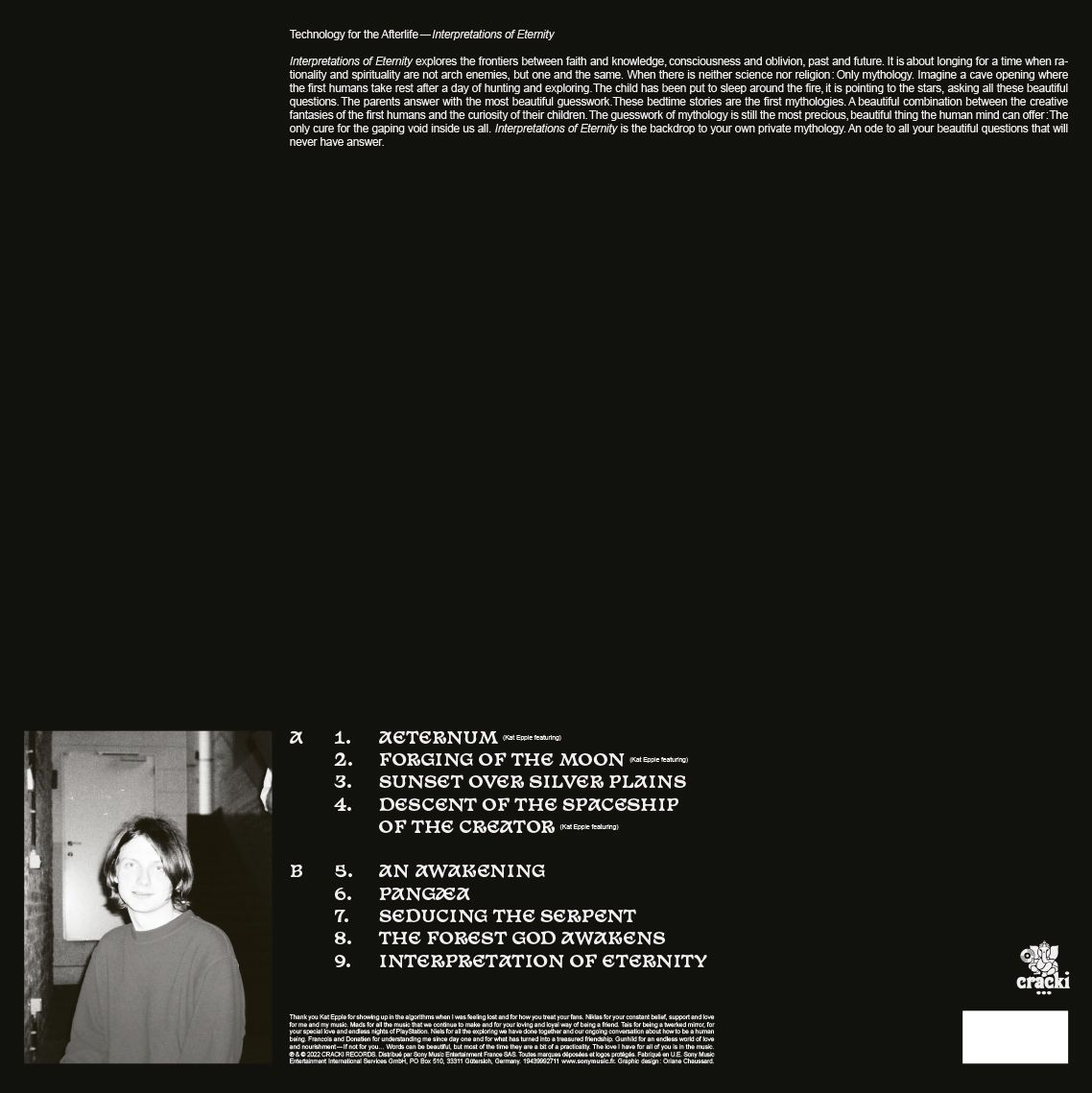 Technology For The Afterlife

Technology for the Afterlife (aka Victor Groth) is an ambient/new age artist from Denmark, set to release his debut album Interpretations of Eternity on Cracki Records in the spring.

The instrumental album explores the frontiers between faith and knowledge, consciousness and oblivion, past and future. It is about longing for a time when rationality and spirituality are not arch enemies, but one and the same. When there is neither science nor religion: Only mythology.

Descent of the Spaceship of the Creator feat. Kat Epple

Recorded in 1982, Following The Light is the third album british composer Albert Alan Owen recorded for the Apollo Sound Label. Originally a Library oriented Music label, Apollo Sound by the mid 70s commissioned contemporary musical pieces from new composers, aiming presumably to provide atmospheric backgrounds for film, television and advertising, and to feed the burgeoning demand for ‘New Age’ music. Therefore comes Following The Light.While certainly melodic, Owen’s music makes no concessions to mid-afternoon mindfulness or commercial use and reuse. Instead, Following The Light - whose title is taken from the Tao. Number 27 - is a deep and immersive listening experience, clearly the work of a singular musical imagination following its own rules in its own way. With the help of Katherine Sweeney on violin and Milada Polasek on electric piano and organ, Albert Alan Owen recorded Following The Light in “live” condition, taking profit of a strong use of the digital effects which were in its infancy at this time; the music was written to make the most of what technology was available, resulting a singular piece of music of sheer beautyThe record demands to be considered as a stand-alone unit, its three sections unfolding elegant and propulsive by turns, as reoccurring themes answer each other through the layers. There are echoes of Reich and Riley in the use of delay, that warm rolling repetition and those bass pulses. But this is not in the service of a system. There is something more lyrical, more humane at work in the music.With Following the Light, Albert Alan Owen has given us a record that stands outside of time and place, it’s familiar elements made strange and new, all bathed in magic hour light.

At the turn of the 90s, Philippe Cohen Solal, then musical director for Virgin, becomes one of the first music supervisor in France and works on film scores by Arnaud Desplechin, Nikita Mikhalkov, Lars von Trier, Bertrand Tavernier or Kieslowski, then later composes for Tonie Marshall, Christian Vincent and Didier Le Pêcheur. He meets the very young composer and arranger Christophe Chassol with whom he will sign early 2000 soundtracks, during these sessions they create together the soundtrack of an imaginary film where music would be our spiritual food. The majority of themes are composed by Philippe with his musical partner at the time Christoph H. Mueller before they formed the Gotan Project. Unveiled here for the first time, this album pays tribute to the art of soundtracks, inspired by the world of sophisticated arrangements by Michel Legrand, Henry Mancini, Lalo Schifrin and so many others. Add a touch of folk jazz with the singers Nivo and Gabriela Arnon and the voice of the brilliant Welshman, leader of Scritti Politti, Green Gartside.

Boogie to Drive By Vol.1…

Are you ready to boogie ? Orly Sad, Italian producer based in Trieste built this solid 6 tracks EP dedicated to the ride. Melting heavy electro funk grooves & vocoder hooks in the pure west coast tradition, it's a must have for the poppers, lolow's drivers, and lowfi boogie lover!

Ted Scotto began his musical life as a trumpet player, but got his foot in the door of production soundtracks when he composed the theme for the 1968 French animated series “Les Shadoks”. Soon taking on the pseudonym Yan Tregger (chosen for its nonspecific, English-sounding connotations), Scotto wrote and recorded more than thirty library records, ranging from funk and R&B tunes to deep dives into the then-prevalent Italo-Disco sound. He also continued to record commercial music (including two albums with his disco act M.B.T. Soul and the under- water trumpet novelty hit “Bubble Bubble”), and work on film scores.In 2018, Mark Grusane adapted the track “Riff On” from Catchy LP for BBE Records, which later decided to reissue Catchy and Duck & Drakes on vinyl. For this new 12inch release, Yan Tregger has done us the honor of reworking two unpublished tracks from the M.B.T project. You will have a bliss listening to two originals tracks, slightly transformed, and two reworks that will make you travel through Balearic and Dub atmospheres, preserving to the maximum the soul of the original grooves.This release announces a turning point in the production. Parisian Soul converges on an exclusive and unique dimension with a live sampler concept on stage to remix their Maxi-vinyl in real time. Surrounded by pianist Alexandre Destrez (St Germain, Dimitri from Paris and Dj Yass), and percussionist Edmundo Carneiro (St. Germain, Bob Sinclar, De La Soul).

Kshatrya (The Eye Of The Bird)…

Transversales Disques presents KSHATRYA, (The Eye Of The Bird), never released before recording by french avant-garde electronic composer Igor Wakhevitch, who composed a bunch of major experimental albums in the 70’s such as Logos, Docteur Faust, Hathor, Les Fous d'Or, Nagual and Let's Start. During this 10 years period, Wakhevitch was close to Jean-Michel Jarre, the Pink Floyd, the Soft-Machine, and legendary choreographer Maurice Bejart having with him many conversations around dance and music, human body and soul, spiritual path, collective life, new society, human evolution. As a composer Igor Wakhevitch collaborated with Salvador Dali, Carolyn Carlson, and Terry Riley to name a few. He's considered as one of the first French composer using synthesizers like Synthi AKS, ARP2600 or Moog modular systems. After spending almost 30 years in India, Igor Wakhevitch dug in his archives this unreleased work recorded in 1999 on his “Mysterious Island 88” system. Esotheric, sacred and cosmic, KSHATRYA, (The Eye Of The Bird) is the logical follow up of Igor’s early works and a monumental piece of electronic music. A must!

Phnom Penh is a Japanese instrumental band. Their first single “Joy” is a perfect mix between no wave and balearic disco. In the lineage of the Yellow Magic Orchestra, Phnom Penh cheerfully mixes synth arpeggiators, drum machines & live instruments. On the flipside, for your extra dancing pleasure Dr. Dunks aka Eric Duncan (Rub n Tug, Still Going) took the song into a psyche disco excursion, with an hyponotic bassline and some killer breaks.