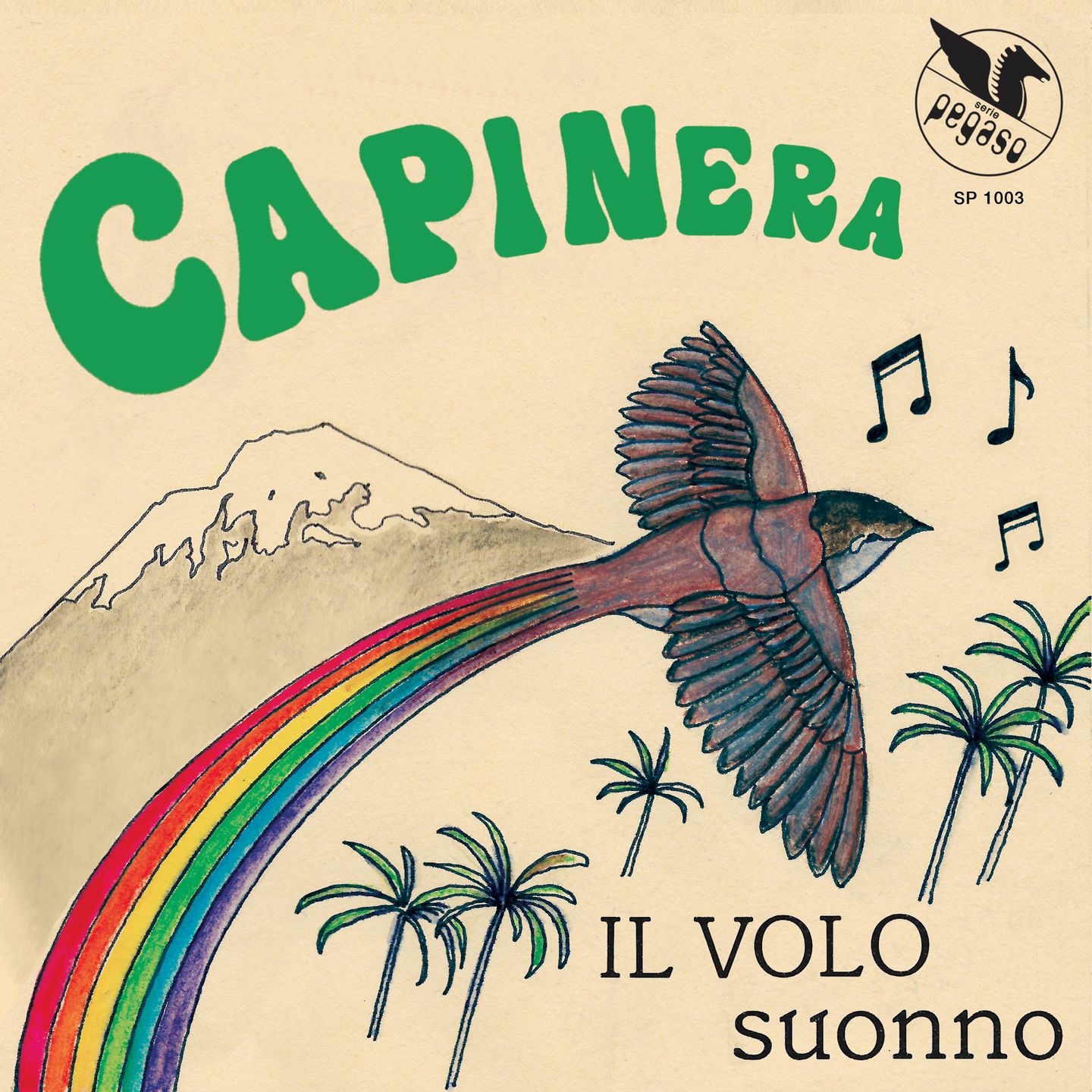 The “Serie Pegaso” catalog stems from the need to write music and lyrics that have a strong link with the city of Naples, that speak the same language and tell it through stories, loves and memories. There are countless stories and testimonies of people who left the "land of the sun" to migrate elsewhere in search of fortune and work but not many know that there is a small bird, the “Capinera”, which has instead decided to do the inverted path through a long journey from cold and distant lands to then settle and find a new home on Mount Vesuvius. But there is also another story, between reality and legend, which is that of the most beautiful woman in the neighborhood called by everyone 'A Capinera because of her long and enchanting black hair. She was a widow coveted and desired by all but she will remain faithful to her deceased husband throughout her life. The only source of livelihood for herself and her three children was the smuggling cigarette trade although she could choose and get whatever she wanted thanks to her irresistible beauty. This is what the creators of the Capinera project tell us, and they are: Gianpaolo Della Noce (better known as Dnapoli and half of the acclaimed diggers duo Napoli Segreta, Michele Cesare aka Breakstarr (one of the pillars of the city's beat makers scene) both assisted by the sharp voice of Adriana Salomone. Together with the production team led by Dario di Pace and Raffaele Arcella the result is the nostalgic and exotic Reggae-Pop in Neapolitan colors of "Il Volo" (today in exclusive preview on Spotify) and the sparkling disco infected “Suonno”.

Almost 2 years after the success of the album THE TONY ALLEN EXPERIMENTS and a few months after the release of the 7inch AMORE, Nu Genea (Nu Guinea) return to the scene with a new LP published by their newborn label NG RECORDS.After touring the world looking for sounds suitable for their vibrations, NU GENEA (Nu Guinea) decided to go back to square one, Napoli, where Massimo Di Lena and Lucio Aquilina were born and raised. They watched their city from a distance reconstructing its energy from their studio in Berlin, calibrating the synths on the meridian of Vesuvius, the volcano that has always protected and threatened Napoli.NUOVA NAPOLI is the result of a long musical research that has become a historical investigation on the sound that shaped Napoli during the ‘70s and ‘80s, starting from the contamination of genres (disco, jazz-funk, African rhythms) which ended up in Nu Genea’s DNA.In this album the synthesizers fill the spaces between the past and the future, tightening in a single body acoustic instruments, electronics and voices in Neapolitan dialect. It is the first time that the duo has worked with such a large group of musicians, some of whom are exponents of the contemporary Neapolitan scene.WARNING: We recommend listening to Nuova Napoli while walking in the alleys of Napoli’s historic center, around wet clothes hanging and street vendors on tiny three-wheelers.

DOWDELIN explores as a tireless ever moving trailblazer a path where Creole jazz, electronic dancefloor sounds and Caribbean percussions come together to create a unique Future Kréol feeling. Dowdelin’s a Lyon-based trio exploring Afro-futurism in its Creolized form, plunging the traditions of the French West Indies into a great fountain of electronic youth glazed in jazz, in a way that few have so far. It all began, or not quite actually, when the singer Olivya contacted David Kiledjian (Fowatile). It is not yet the moment and Dawatile then doubts the relevance of a group with soul influences in English, with a non English-speaking singer... But they stay in touch, and a year later, an idea sprung: what if Olivya sang in Creole, her mother tongue. This is Dowdelin’s genesis: two individuals, constantly exchanging, in a quest for a Creole feeling chiseled by electronics.Dowdelin illustrates this art of blending: the search for the recognizable ancestral flavor in the moment, pairing it with an unusual influence, shaking everything to create the texture that will make the difference. Being embroidered in the bubbling afro-futuristic scene and confirming the return of Caribbean influences in French pop, Dowdelin becomes a trio when David thinks of an old fellow musician whom he has not met in ages: Raphael Philibert, Guadeloupian poly-instrumentalist omnipresent on the jazz scene, saxophonist for Sonny Troupé, but also a goldsmith in Afro-Cuban percussions and a tried Gwoka player. He is added to the sketched repertoire: it’s a match! Dowdelin transcends the exercise of style and complicity with two multi-instrumentalists, who by their experience, versatility and vision, open the field of possibilities to a singer speaking in her native language. The group brings to the forefront the notions of expression and freedom in music while steering clear of the fixed roles and the clichés.

Founded by the pianist Robin Notte (from the former electro-jazz band WISE) Panam Panic is one of the best Jazz-Groove french bands. Influenced by Musicians like Yussef Dayes, Robert Glasper, Roy Hargrove or Christian Scott, Panam Panic mix up Jazz with groove, Hip hop and electronic textures. The Black Monk is their first vinyl album.Robin Notte's gamble is to create a Jazz which is sufficiently sophisticated to delight the most demanding experts, yet also accessible enough to initiate neophytes.As such, Panam Panic defends a resolutely actual Jazz, open with no borders or blinders, combining powerful organic grooves with tidy melodies, delicate harmonies and frenzied solos

** Available exclusively at The Pusher **Favorite Recordings presents Remixes by Voilaaa, a new EP built with exclusive versions of some of its biggest hits. Known for its Afro-Disco sound and strong dancefloor-friendly festive bangers, these new mixes bring another light to the successful project of Bruno "Patchworks" Hovart.On A Side, Voilaaa asked famous Brooklyn-based producer and remixer JKriv (Razor-N-Tape) to provide even more club energy to "Ku La Foon (feat. Lass)”, originally released on Voilaaa's third and last album. The result is a powerful bomb that won't give any rest to the crowd.The tracklist goes on with "Ben Bene La (feat. Lass)” reworked by Patchworks himself in a very Latin way, taking inspiration from the NY scene and its dancers, "Spanish Harlem" and Mongo Santamaria. You've got to play it loud and we're pretty sure you'll see some special moves on the dancefloor.On B side, you'll hear another Patchworks remix, this time with probably one of Voilaaa's biggest hits, "Spies Are Watching Me (feat Sir Jean)”. In the footsteps of Moodymann, Masters At Work or the UK Garage scene, Patchworks delivers here some of his classic house music energy. You may know he started his career with house music: he transformed this anthem into a proper deep house cut with the same passion! Finally, Voilaaa remixed himself! Working on "Tu Mens Devant Moi (feat. Ramatou Traore)”, Voilaaa carries the arrangement closer to the Angolese and Cape Verdean sound, reminding also the sound of Super Mama Djombo from Guinea Bissau. A tropical cut that will bring more and more sunshine to the club.

Wan Chai Records is a Hong-Kong based label, specialized in rare Asian records and quality reissues.For their first release, they wanted to highlight a promotional record released at 500 copies only in Hong-Kong for a famous Soda brand. It was offered with a pack of bottles in 1977 and never been released.Produced and arranged by Noel Quinlan, this Album is a mix of Funk and Soul covers. The result is an awesome LP including groovy covers, from the classic “Lowdown” by Bob Scaggs, to a Funky “I Shot The Sheriff” by Bob Marley with a deep Fender Rhodes, and 12 other outstanding tracks.