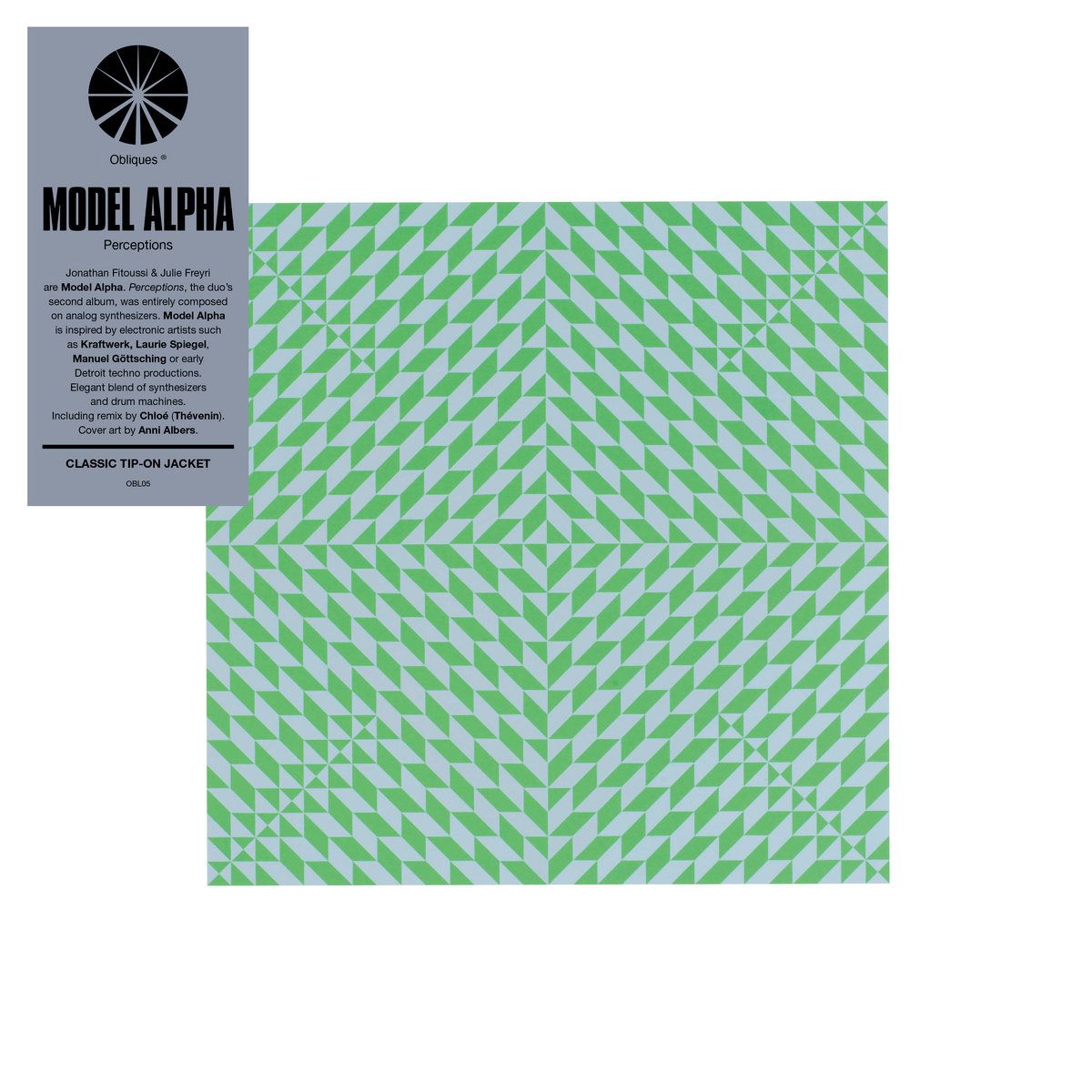 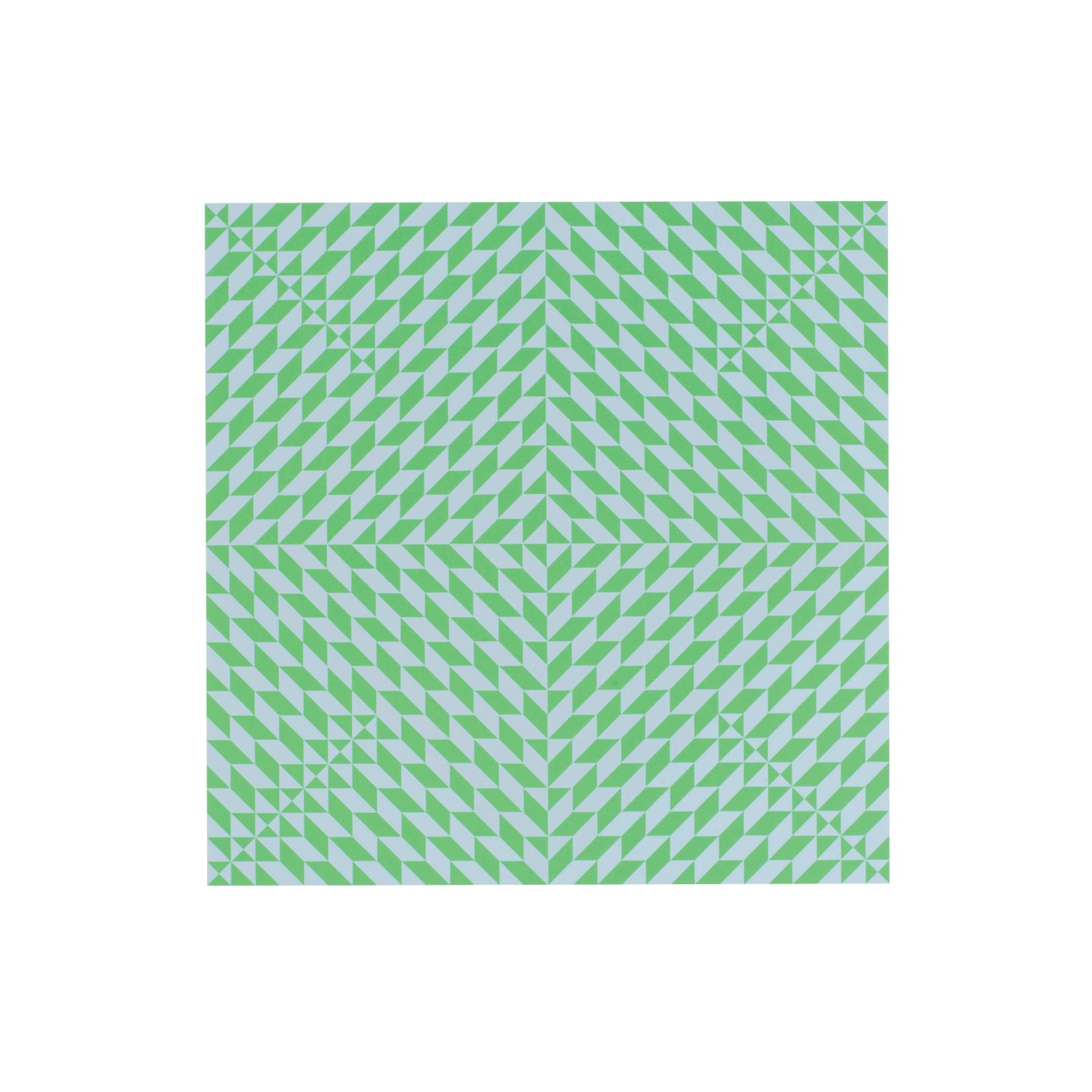 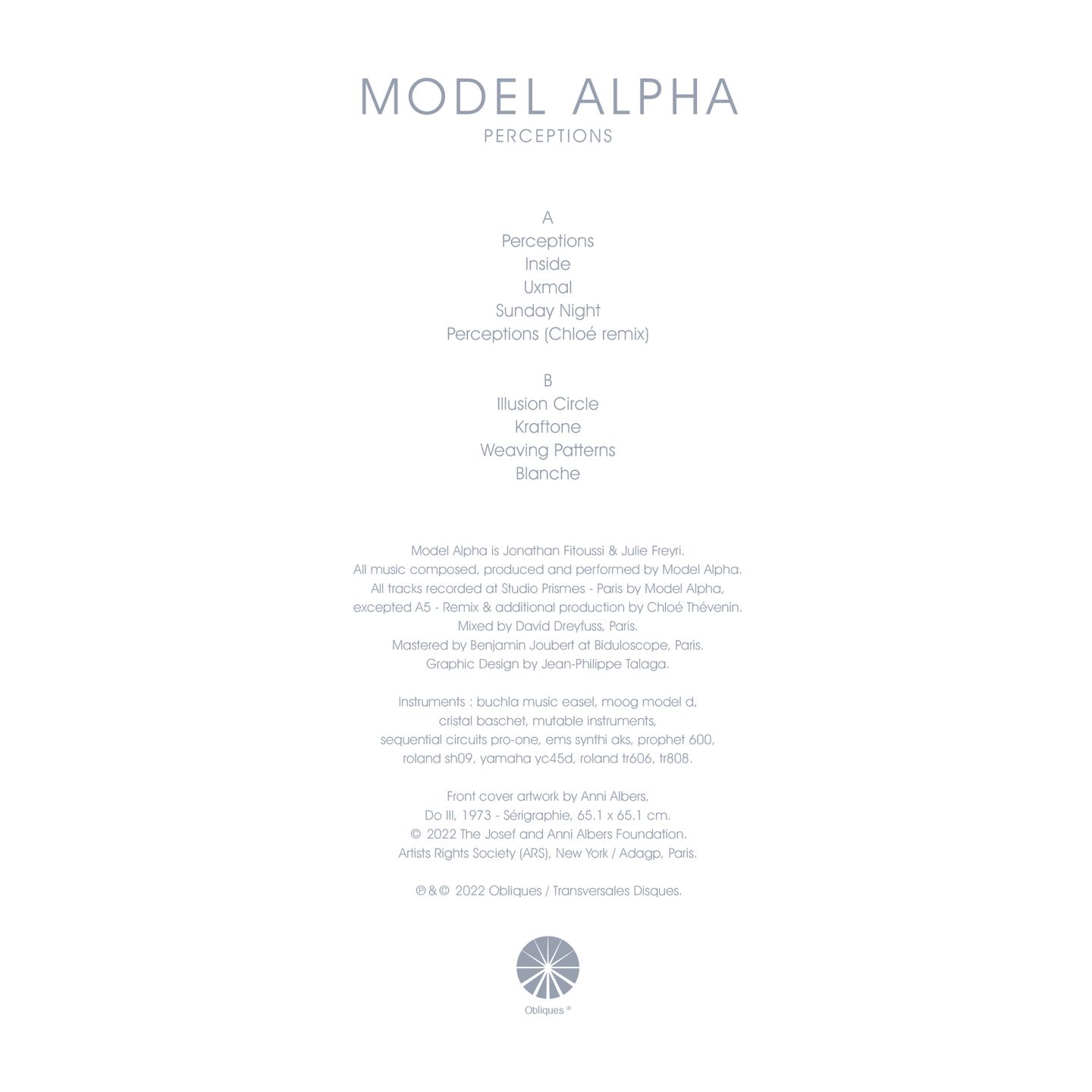 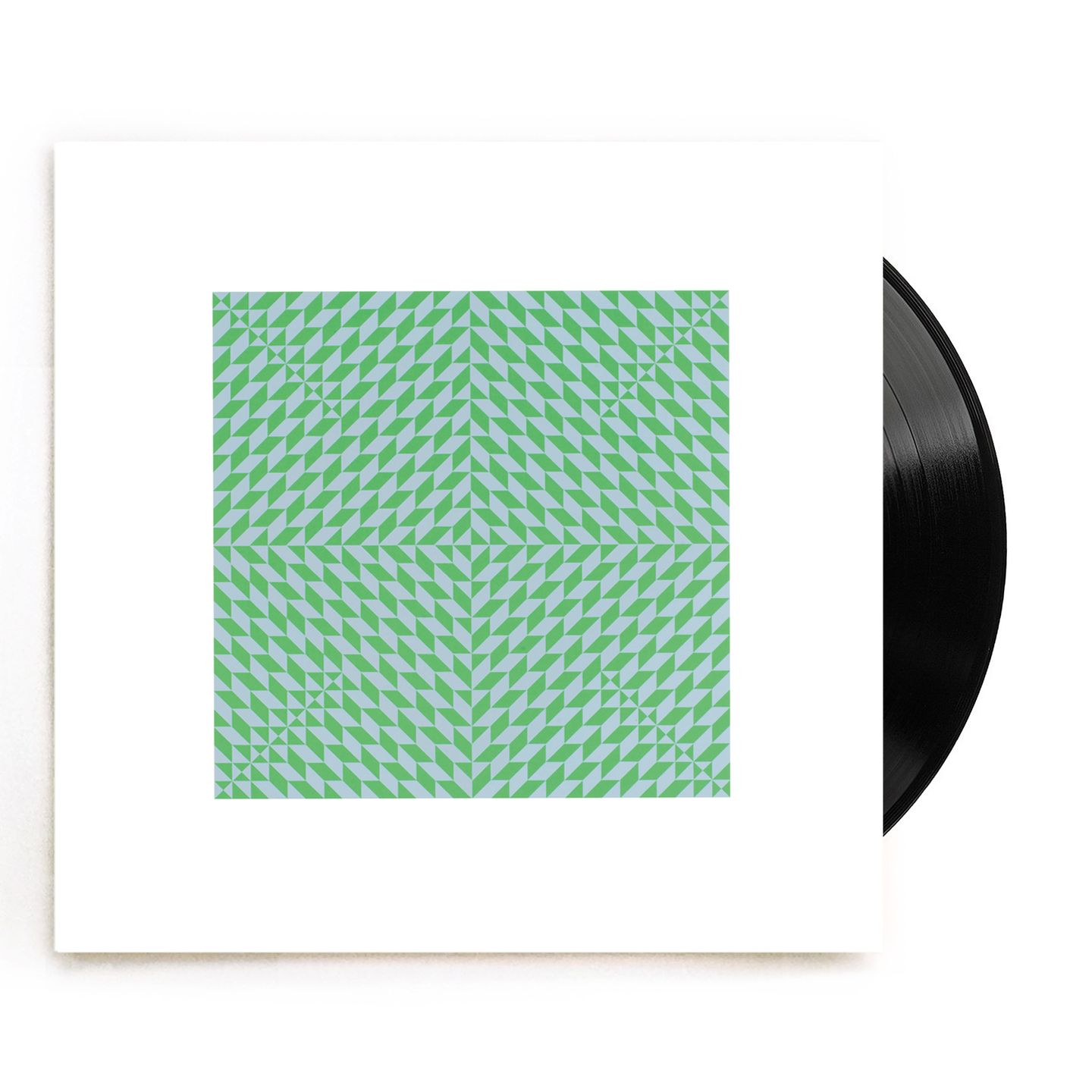 Jonathan Fitoussi & Julie Freyri are Model Alpha. 8 years on after their first album Dimensions, Perceptions is the duo's second album and was entirely composed on analog synthesizers.
Model Alpha is inspired by electronic artists such as Kraftwerk, Laurie Spiegel, Manuel Göttsching or early Detroit techno productions. An elegant blend of synthesizers and drum machines including remix by Chloé (Thévenin).

1979. The suburbs of Paris. Five friends, whose origins stem from the West Indies and North Africa, came together to form Trenchtown Meditation, a “creole-speaking” French reggae band.Heavily inspired by the seminal sound of Bob Marley, Trenchtown Meditation was one of the pioneering bands of the burgeoning French reggae scene. It was also at this time that France saw the explosion of pirate radio stations; like many other bands of the era, Trenchtown Meditation would play live sets on-air in these small radio shacks in between gigs on the various scenes of Paris and its vicinity. The band also got their 15 seconds of fame in 1983 when they appeared on the French TV show “Aujourd’hui La Vie- ‘Spécial Exotisme’”. It was during this busy period that the band recorded an 8 tracks reggae album (which to this day remains unreleased). But in spite of their record and strong desire to make a living from music, the daily grind caught up with the band; in 1984 the guitar player quit the band. Subsequently, the four members decided to rename the band Cap’tain Créole with the aim – while remaining true to its reggae roots – of exploring new musical horizons, driven by the will to go beyond all that they’d done up to that moment.The group had access to a professional recording studio and quickly decided to cut a new project. With the help of 3 new members – among them a sax player and a trumpet player, both coming from the jazz scene, who helped define the new sound of Cap’tain Créole – they recorded their unique outing called Ni Bel Jounin. It’s a single composed of 2 titles Fré Moin / Ni Bel Jounin, both sung in créole, which was clearly unusual for the time. Both tracks are at the crossroads of many universes: Afro, Rock, Funk, Reggae and the result is quite unique! The band also used with great impact some subtle electronic elements. “Fré Moin” catches you instantly while “Ni Bel Jounin” strikes the listener with its beauty. The spiritual vibe that oozes from the record is an obvious marker of their reggae roots.Privately pressed and self-distributed in small quantities at the time, BeauMonde is proud to make the one and only record of Cap’tain Créole available again.

The mbira maestro from Zimbabwe Jacob Mafuleni and his wife Martha Thom on vocals and percussion team up with French electro-funk prodigy Gary Gritness for a fresh and surprising take on traditional Shona music.Gary Gritness' subtle electronic arrangements take already hypnotic compositions to a higher dance-floor friendly trance without altering the fragile nature of mbira music . This natural and respectful collaboration resulted in two already classic ‘afro techno’ tracks “Atuka Mondhoro 808” and “Chikoni 808”, released on Nyami Nyami Records. The present album Batanidzo (Together) was recorded live in 2 days at the Red Bull studio in Paris in September 2016 when the band was invited by the Red Bull Music Academy team to participate to their second live music festival.

Laying On The Sofa…

Starting 2020 on high wheels, Parisian crew Discomatin picked an ultimate banger of the 80’s boogie era, Laying On The Sofa by French diva Isabelle Antena. Rare and expensive, the original 12inch here remastered for full effect offers two extended versions/remixes by Belgian electro and jazz-funk hero Marc Moulin and by American producer and DJ Mark Kamins. With her amazing voice and beautiful compositions/productions, Isabelle signed on this release two of her many great songs. « Laying On the Sofa » is a Sade-esque song with a lot of rich harmonies sublimated by the strong rhythms of the 808. This Mark Kamins remix brings the song to its climax with kind of an housy extension with its strong synths and guitars parts before it goes back to the chorus for an epic ending. Back in the days, NY DJ Mark Kamins brought Isabelle to the famous Danceteria to perform. At the same time, he was recording some of the first demos of Madonna… Do you feel the vibe? « La Tête Contre Les Murs » with his « anti-system » feeling in the lyrics is the other beauty on the EP. Remixed here by Telex member and jazz-funk don Marc Moulin, who became later the father of Isabelle Antena via her husband, the song written by her and her mother describes an old but still fresh feeling. Disillusioned, in loss of marks, with no directions: the words don’t miss to describe the youth and its feeling towards society. Maybe, this is why « you’re crashing your head on the walls » as Isabelle sings. Maybe it’s people trying to educate them in relation with certain norms who are in the end « maybe what the danger is ». With her classical and so French casualness surrounded by syncopated rhythms, Isabelle transforms this timeless topic to a song dedicated to all generations going through times of wanderings. You may know Isabelle Antena other’s work like her French-Belgian synth-pop trio Antena which led later to her another band Powaga Sisters. Combining minimal electro, pop and samba styles, Camino Del Sol was one of her greatest albums. As a solo artist, she’s found particular success in Japan with samba-inflected nu-jazz and electro-pop compositions. Still, with her own words, this EP « means a lot » to her. Thanks to Discomatin, it’s now available to the real connoisseurs with an exclusive insert which contains lyrics, again with fantastic illustrations from French artist Camille de Cussac.

Lucas Arruda’s born in 1983, in a Brazilian state called Espírito Santo, near Rio de Janeiro. Coming from a musical family (his dad and older brother are musicians) he started playing and listening to music very young. At the age of 13, he was also playing professionally already.After studying electric guitar and a few years spent playing in various bands with friends, Lucas passion quickly turned into Rhodes and keyboards, expanding his musical range of skills. At the same time he started a project called Du Black, with his older brother, Thiago, quickly receiving various local support from people such as Ed Motta, William Magalhães (Banda Black Rio), Robert Lamm (Chicago) or Hyldon (Brazilian soul legend).From the growing notoriety obtained with their first release, the band began to work with various other artists and singers such as Tamy Macedo, Idalina Dornellas, or Bossa Nova’s legend, Leila Pinheiro. Lucas also worked on the side for several other projects, which led him to build a recording studio with Thiago in 2011. This decision was a large step in his musical career and the next two years were indeed filled with great new collaborations alongside artists like Azee Project, Danny Perez (English producer), or Guida de Palma (Jazzinho). Now 2 years after he launched this home-studio, here comes “Sambadi”, first single and title of Lucas Arruda’s upcoming first solo LP!In Lucas’ words, Sambadi is highly inspired by Rio de Janeiro: “I’m living between two places, but my music and my heart are all in Rio”. As for the musical side, the album almost sounds like a tribute to his longtime heroes, with tasty influences by Stevie Wonder, Curtis Mayfield, Marcos Valle, Azymuth, Robson Jorge & Lincoln Olivetti amongst many others. And Lucas also humbly concludes: “With Sambadi, I really hope to honor all the guys who influenced me.”