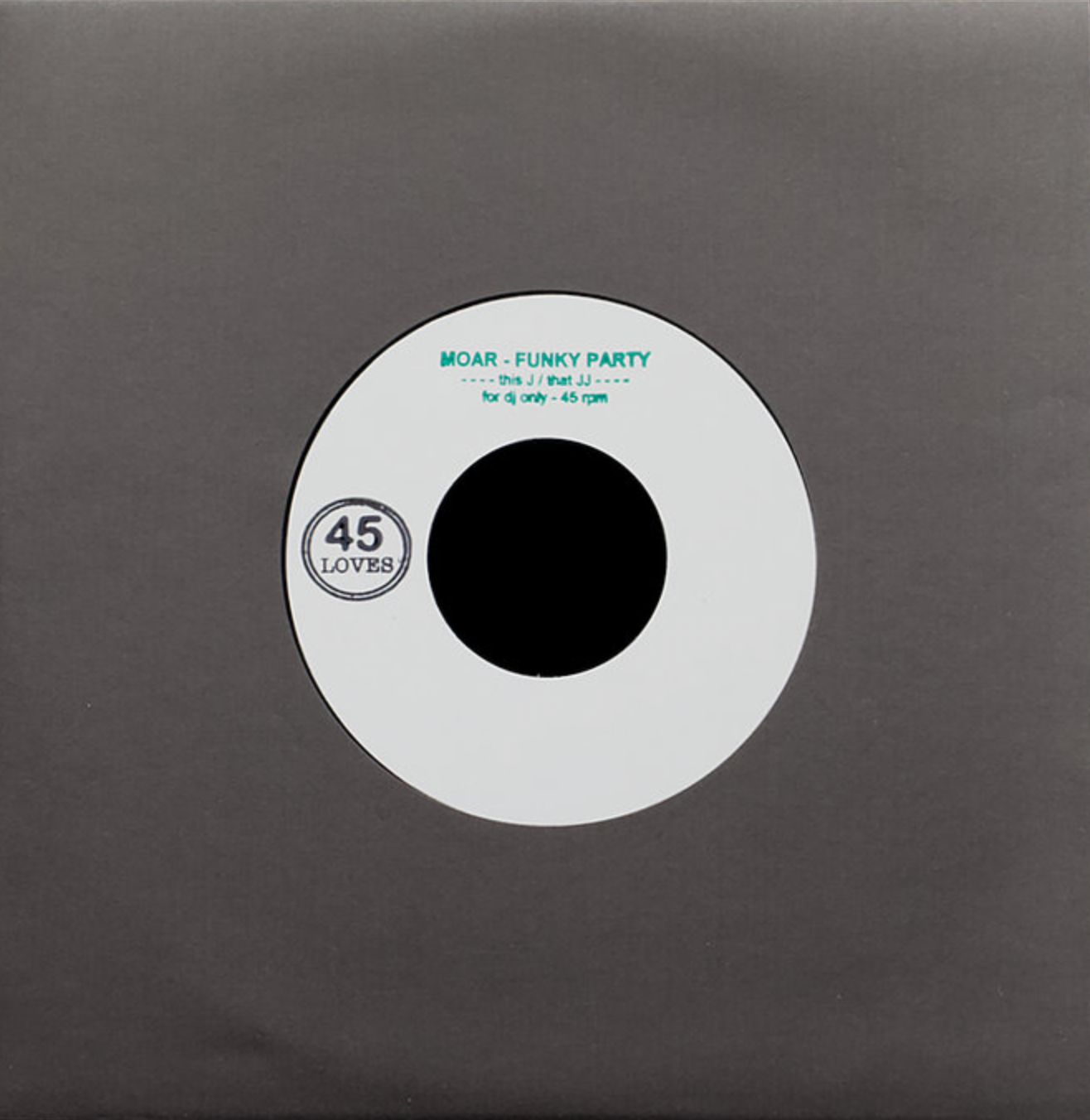 ** Available only at The Pusher **

As the mercury gradually nudges up on this side of the world we have the perfect soundtrack for the extended evenings and we have French producer DJ Moar to thank for that. This latest chapter in his 45 Loves series entitled Funky Party is laced with that summer dance-floor syrup to keep the dance-floor cookin'.

The J side is the cool side. Moar slips on the Balearic boots for a steppers cut that instantly transports us to the beaches and seaside sunsets. Some clever vocal samples are sprinkled throughout. Feelin' it!

On the flip JJ, Moar shifts gears and treats the listener to a Paisley-punched French house tribute that bangs! With a straight-up funk-fueled chorus we'll all be bellowing out this summer and coupled with a tight horn section this Punk-funk feast is a real treat for the listener.

Word of advice to funk lovers; there is not a minute to lose. Get on board of the Big Hustle’s spaceship. Before we take off, let's do a little history. The band was founded in 2014 by bass player and composer Sébastien Levanneur and its aim is to bring together 70's old school funk with the hippest actual sound laced with influences spanning from Steely Dan and Headhunters, to Snarky Puppy and Soulive. With mighty horn players, a rock and funky rhythm section, the Big Hustle's music has a very large variety of soundscapes.The first destination takes us to the Washington, D.C. area with “Turn Up”. The groove is clearly go-go music flavored with the trademark sound of cowbells and of course it reminds us of Zapp by the use of the talk box on lead vocals, performed here by Saad El Garrab. And don't miss out Shaun Martin (Snarky Puppy, Erykah Badu, Kirk Franklin amongst others) as a very special guest performing the talk box solo! Second stop is “A Curse, A Blessing”. It’s an instrumental very much in the Freddie Hubbard vein during his CTI years. The last leg of the A side ends with an instrumental interlude titled “Flying Donut”. Double tribute to Jay Dee and Flying Lotus, the music is a simple hip hop loop based on samples. The B side takes us back into the past with two brilliant covers, involving Rod Temperton the late great British songwriter who scored some of Michael Jackson's biggest hits. Now the idea for this B side is to do the opposite approach from the A side. Taking 70's and 80's original music and make them travel into time to 2018. We first land with a Heatwave song named “The Star Of A Story” from their 1976 Central Heating album. Track 2 is a Herbie Hancock song named “Gettin' To The Good Part” from his 1982 Lite Me Up LP. This Time Traveler EP journey ends with an interlude. Called “Gimme Dat”, the song deals with the need of new music, new sound.Again, this blend of deep rooted funk laced with a contemporary edge is to be consumed without moderation. And do not forget that E.P. also stands for extended pleasure.

Harlem Pop Trotters is one of the best jazzfunk albums in the French library, and one of the grooviest too. Written & produced by Jean Claude Pierric & François Rolland for Les Tréteaux in the mid ‘70s, this real masterpiece is now reissued on Underdog Records (Janko Nilovic, Martial Solal) in a rare colored edition!

Boogie to Drive By Vol.1…

Are you ready to boogie ? Orly Sad, Italian producer based in Trieste built this solid 6 tracks EP dedicated to the ride. Melting heavy electro funk grooves & vocoder hooks in the pure west coast tradition, it's a must have for the poppers, lolow's drivers, and lowfi boogie lover!

Favorite Recordings proudly presents Deux, second album of French Jazz-Funk quartet Aldorande. In this new chapter, the four explorers pursue their interstellar trip on the Aldorande planet, deploying their ever deeper love for the 70's Jazz-Funk & Fusion scene. Extending their first visions of this new world, the bigger-than-life arrangements of this second album reflect again their high attention to dramatic narrative schemes, breezy Brazilian vibes, tempestuous funky grooves and strong cosmic melodies from outer space. Classic and contemporary at the same time, Deux is built for the like-minded souls still looking for the perfect beat.Twisting time and space but never forcing the groove, the band dives more profoundly into the Cortex influence of their compositions, with intense female back vocals fitting perfectly into their cinematographic vision. Like a cry in space, could these esoteric incantations be heard by Aldorande's divinities? Or will they be more impressed by the super-tight rhythm section with its bangin' basslines or an irresistible blend of drums and percussion? In the end, they probably would have to surrender after hearing the infinite echoes of the synthesizers and horns reflecting in the atmosphere. Deep and thoughtful, the travel has only begun but it seems that so much has already been experienced. Breaking the code, they opened the gates to a rebirth. One that could be only accomplished by finding the “Pierre des Mondes”, deeply buried somewhere on Aldorande - the only key to solve the riddle of the groove. Mission accepted.You'll find in Aldorande some of the best French jazzmen including bandleader and founder Virgile Raffaëlli on bass (Setenta & Joe Bataan, Camarão Orkestra), Florian Pellissier on keys (Iggy Pop, Setenta, Cotonete & Di Melo, …), Mathieu Edouard on drums (Chassol, De La Soul) and Erwan Loeffel on percussion (Camarão Orkestra, 10LEC6). On this album, they took the initiative to invite two guests on some tracks: AOR singer Al Sunny and killer guitarist Laurent Guillet (Le Soldat Rose, Setenta).

Massive balearic summer vibes going on here! Futuribile records did set its eyes on the past with a reissue of Il Giardino dei Semplici's Carnevale Da Buttare. In addition to the original song, this 45rpm 12'' record provides an instrumental rework of ''Carnevale Da Buttare'' by Raffaele 'Whodamanny' Arcella, the son of Il Giardino dei Semplici's keyboardist and founding member Andrea Arcella. Whodamanny makes a nice balance between the original and todays functionality. He swapped the blazing saxophones for mind-melting synth solos that takes things into othe realms.