Cleveland Francis
Beyond The Willow Tree 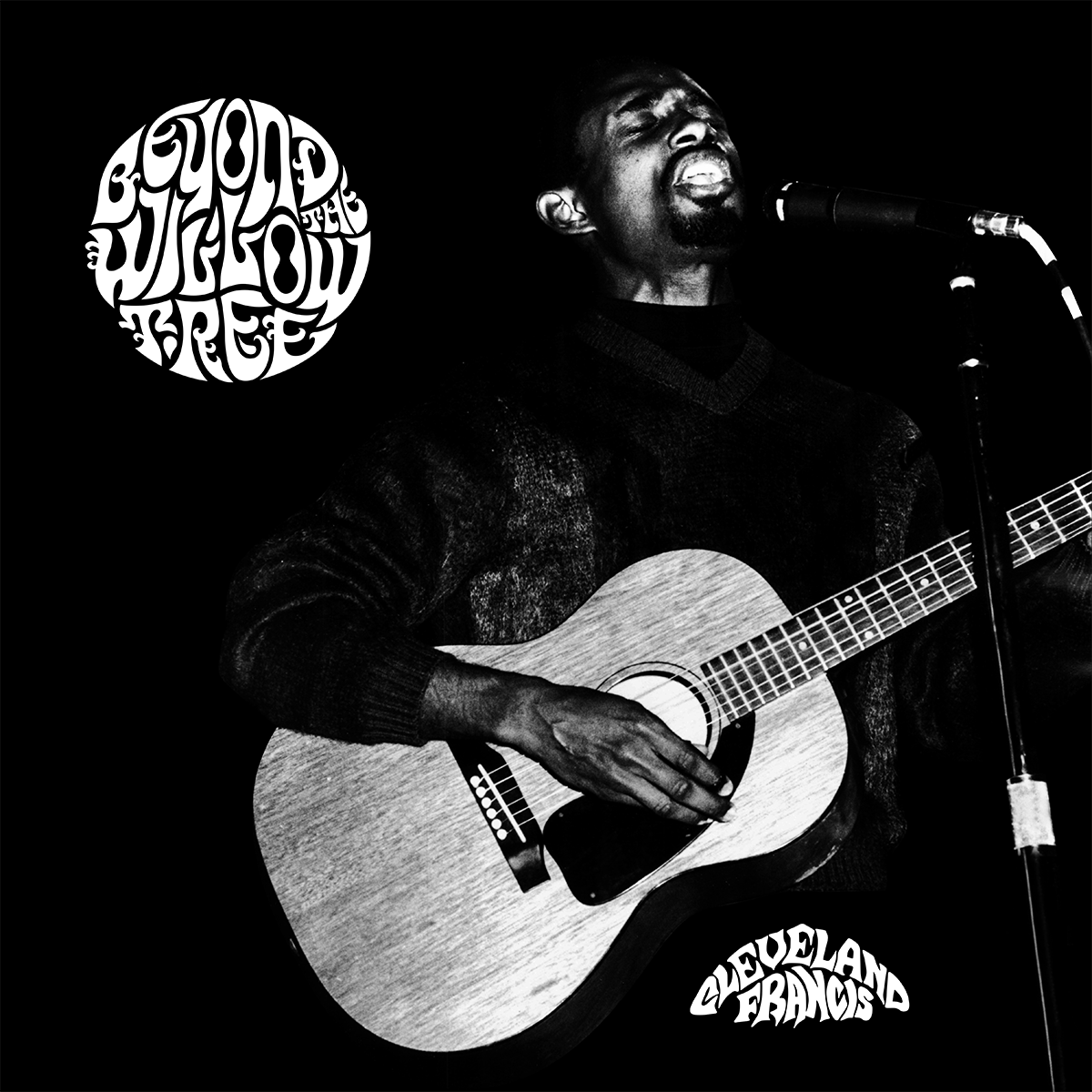 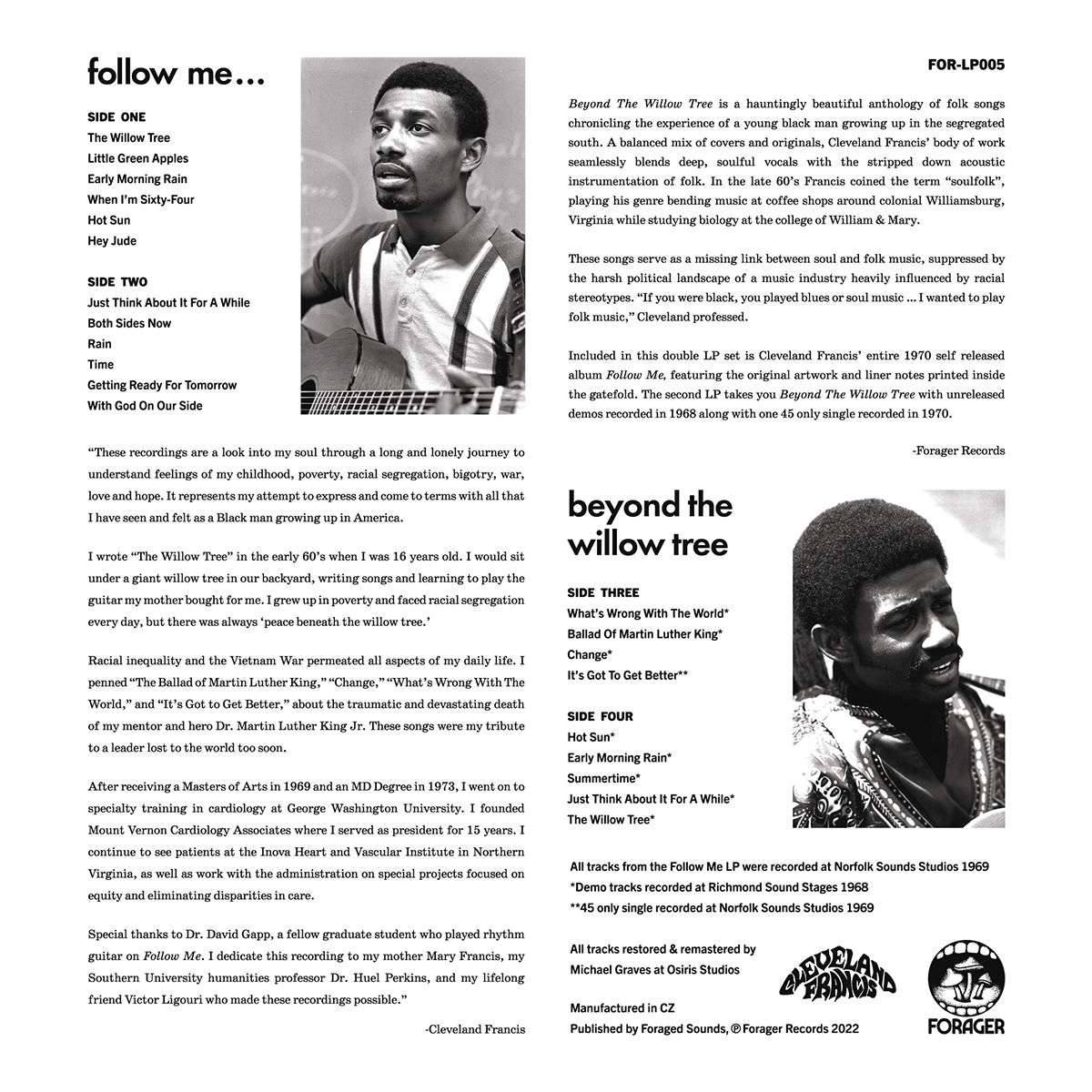 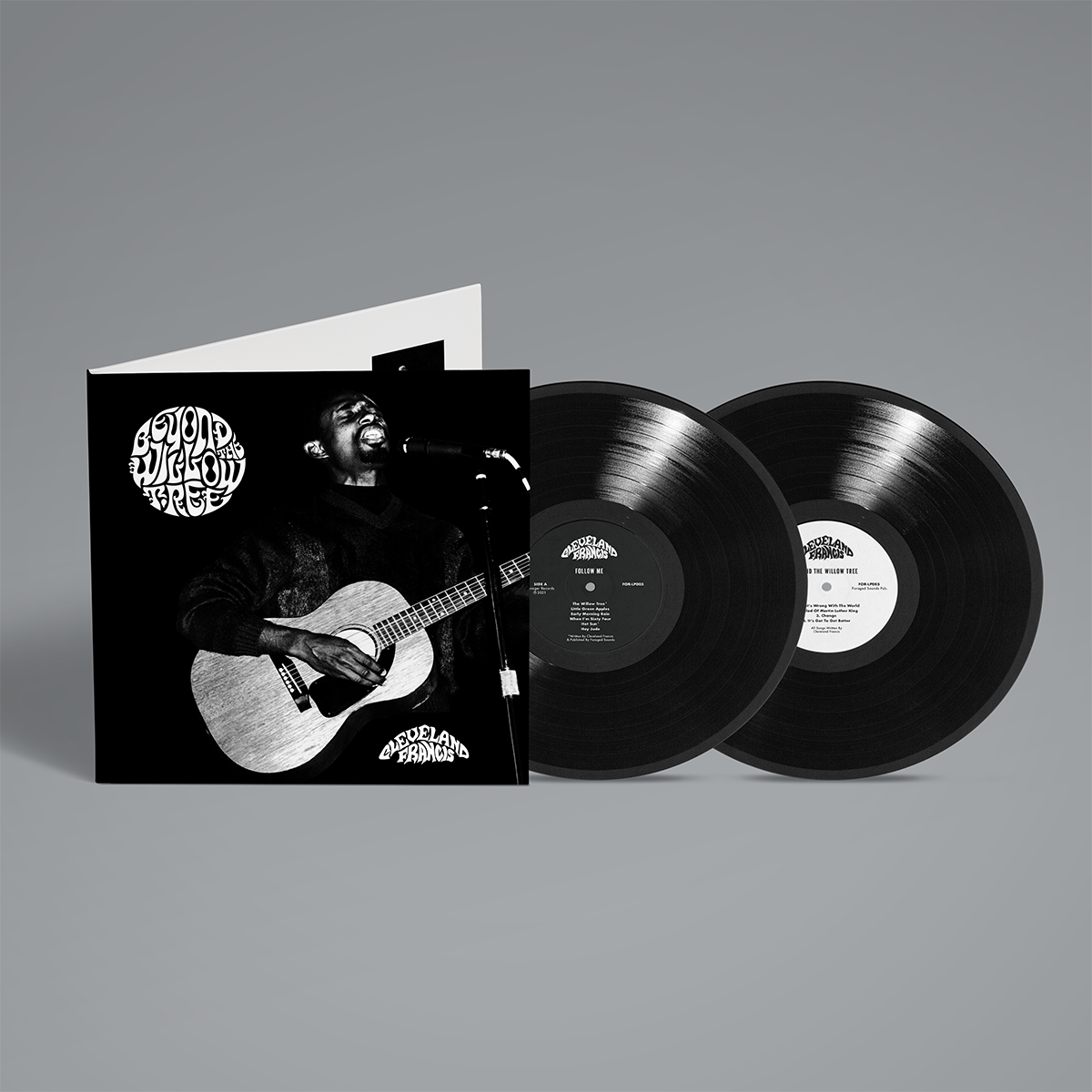 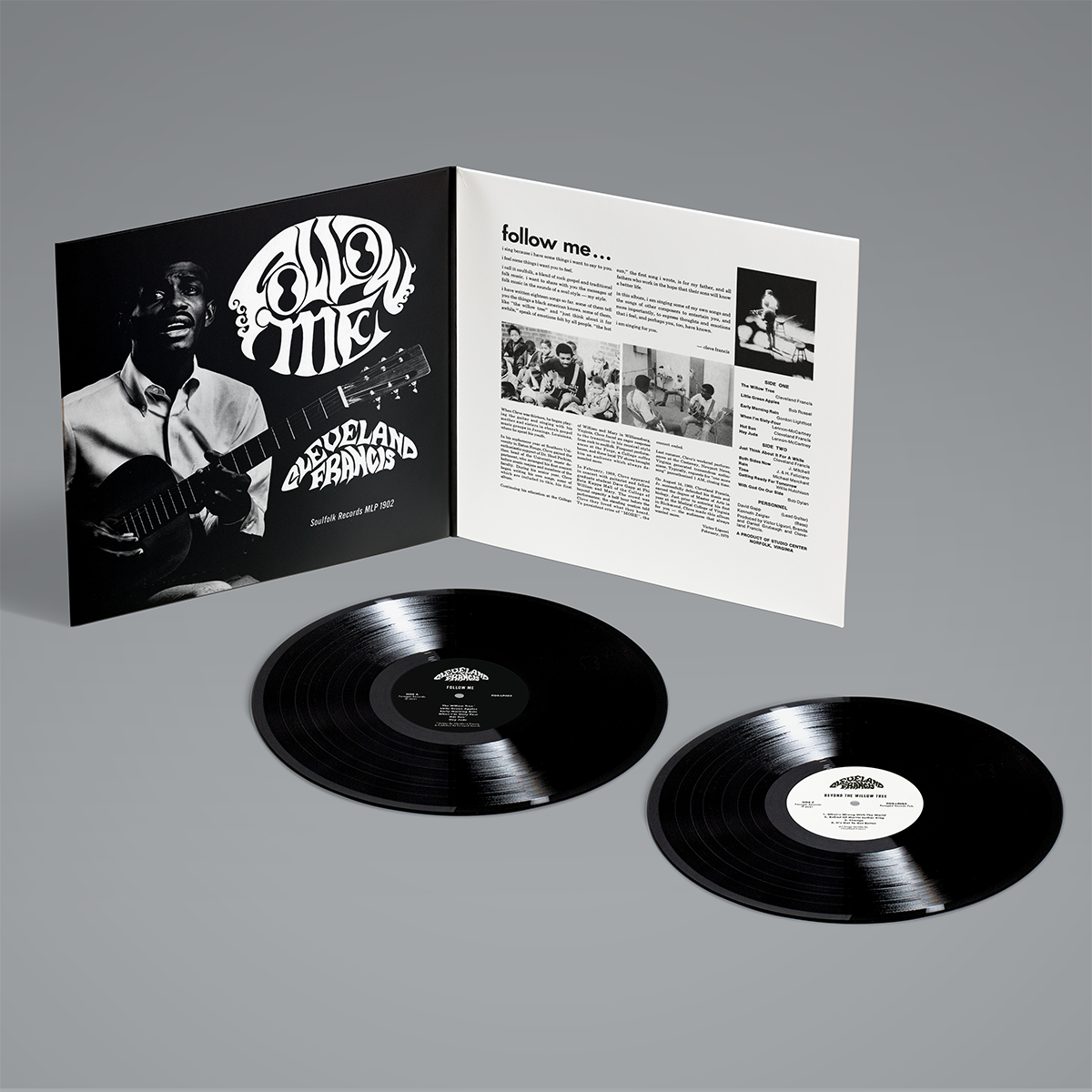 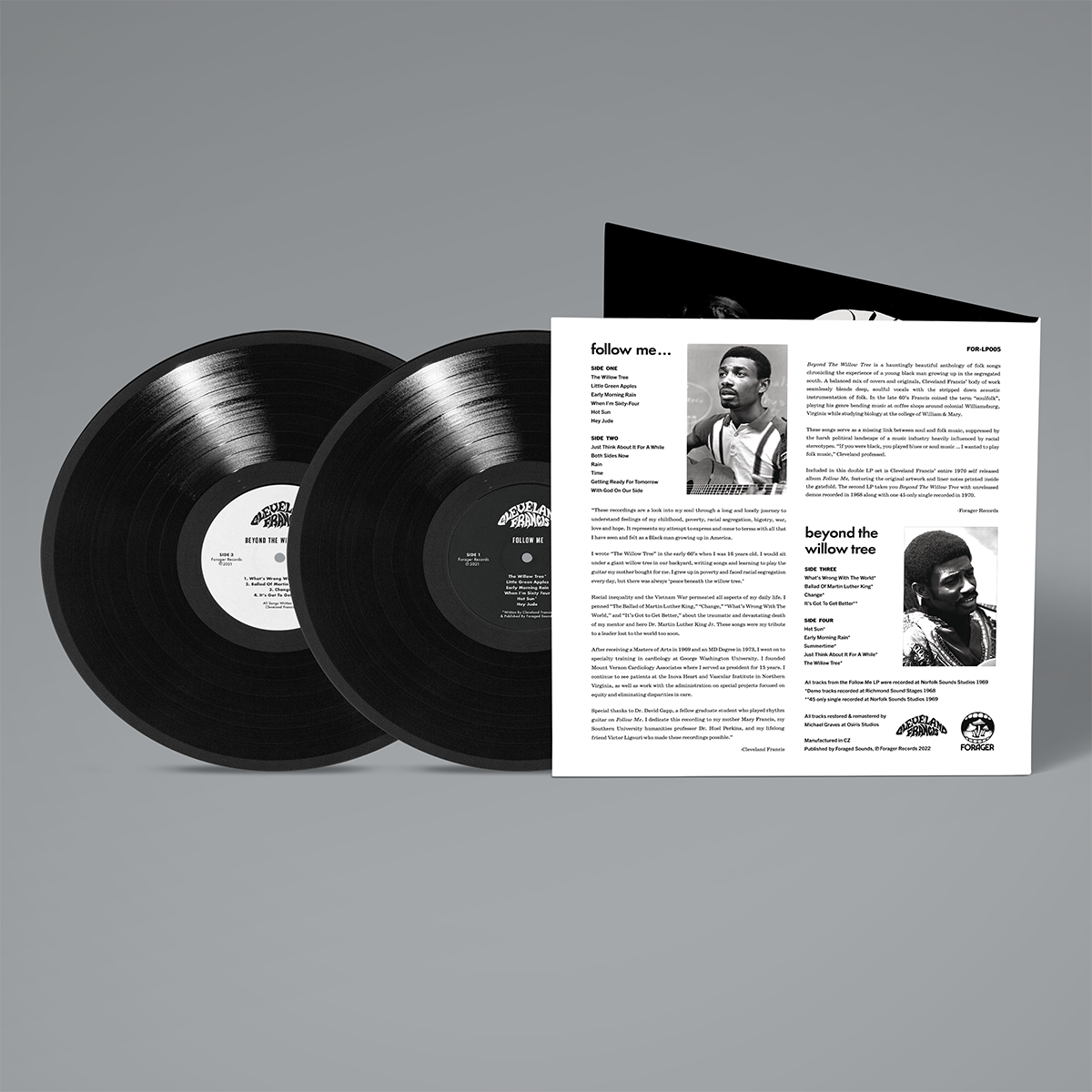 Beyond The Willow Tree is a hauntingly beautiful anthology of folk songs chronicling the experience of a young black man growing up in the segregated south. A balanced mix of covers and originals, Cleveland Francis’ body of work seamlessly blends deep, soulful vocals with the stripped-down acoustic instrumentation of folk. In the late 60’s Francis coined the term “soulfolk”, playing his genre bending music across college campuses and coffee shops while earning a medical degree at William & Mary.

These songs serve as a missing link between soul and folk music, suppressed by the harsh political landscape of a music industry heavily influenced by racial stereotypes. “If you were black, you played blues or soul music … I wanted to play folk music,” Cleveland professed.

Included in this double LP set is Cleveland Francis’ entire 1970 self-released album Follow Me, featuring the original artwork and liner notes printed inside the gatefold. The second LP takes you Beyond The Willow Tree with unreleased demos recorded in 1968 along with one 45 only single recorded in 1970.

“These recordings are a look into my soul through a long and lonely journey to understand feelings of my childhood, poverty, racial segregation, bigotry, war, love and hope. It represents my attempt to express and come to terms with all that I have seen and felt as a Black man growing up in America.” - Cleveland Francis

Just Think About It For A While

Getting Ready For Tomorrow

With God On Our Side

What’s Wrong With The World

It’s Got To Get Better

Just Think About It For A While (demo)

Moar is hot on the floor with this double hip-hop single with the flavor of classic party anthems !! Don't miss it, this is a new killer party :-)Dancefloors were made for this, quality stuff.Hand stamped records & limited press!

** Available exclusively at The Pusher **Boogie Butt Records presents its new release: we are happy to find on this one our friend Will The Funkboss that we had presented on our previous compilation Boogie Slice Vol. 1. He comes back with an incredible dancefloor banger with two slices of Electro Funk coming in 7inch limited vinyl.Willie The Funkboss is one of the French Rap producers we respect. From his beginning as a DJ in 1991 to his sparks in production at the end of the 90's, everything he touched was good.He began his career as the resident DJ of the only French club dedicated to Soul and Hip-Hop and started to produce remixes and hip-hop instrumentals before leaving for NYC to perfect his productions and DJ's, before returning to Lyon.Upon his return, he puts his discoveries to good use by founding Le Gang Du Lyonnais with his friend Raf, a group that specialized in producing French rappers and singers, collaborating with the best of French urban artists. In 2003, they went gold with the single of 113 (Mafia K'1 Fry) "Au Summum".Today, Will The Funkboss produces Hip-Hop, Soul, Nu-Disco and House on quality labels (Plaizir Musik, Smokin Beats, …), still in the groove!Just pop it!

First collaboration between Jamaican singer songwriter Courtney John, the lovers rocker & French producer Guillaume "Gee" Metenier, "All I know" is a very cool - unique sounding, dub funk synth reggae soul with delicious vocals - yes it's all that and more! One to get those sub woofers shakin' - turn it up! "All I know - what you reap is what you sow"