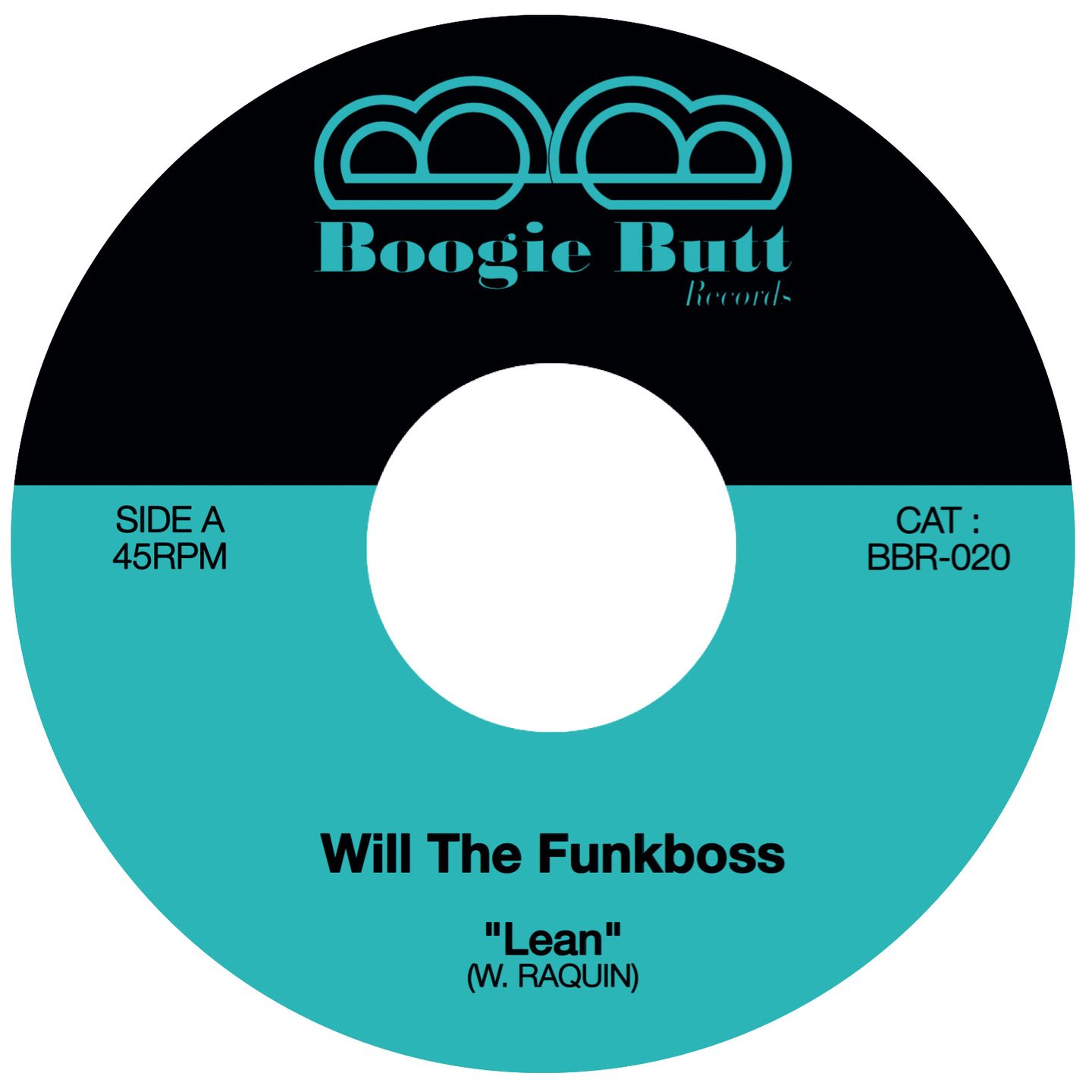 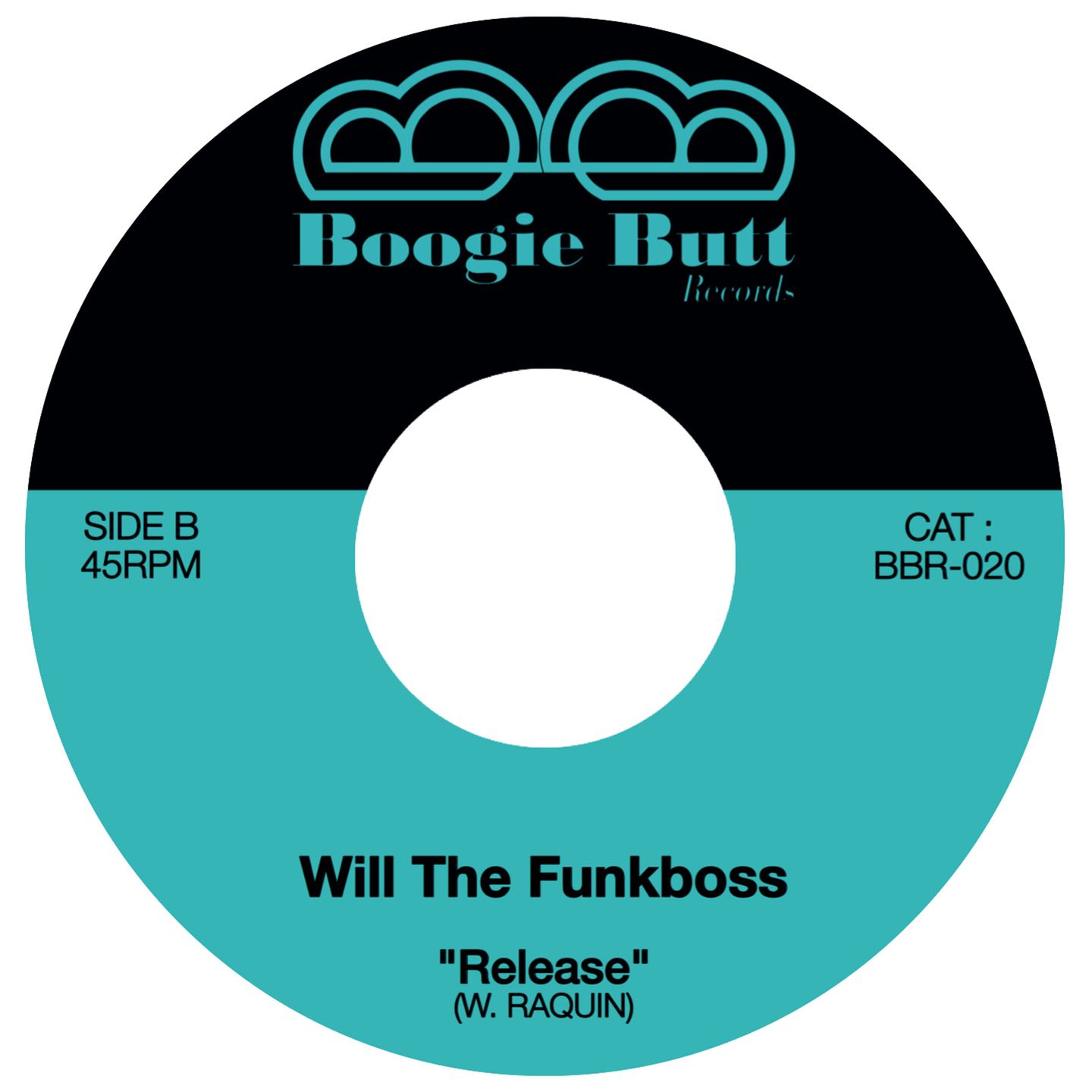 Boogie Butt Records presents its new release: we are happy to find on this one our friend Will The Funkboss that we had presented on our previous compilation Boogie Slice Vol. 1. He comes back with an incredible dancefloor banger with two slices of Electro Funk coming in 7inch limited vinyl.
Willie The Funkboss is one of the French Rap producers we respect. From his beginning as a DJ in 1991 to his sparks in production at the end of the 90's, everything he touched was good.
He began his career as the resident DJ of the only French club dedicated to Soul and Hip-Hop and started to produce remixes and hip-hop instrumentals before leaving for NYC to perfect his productions and DJ's, before returning to Lyon.
Upon his return, he puts his discoveries to good use by founding Le Gang Du Lyonnais with his friend Raf, a group that specialized in producing French rappers and singers, collaborating with the best of French urban artists. In 2003, they went gold with the single of 113 (Mafia K'1 Fry) "Au Summum".
Today, Will The Funkboss produces Hip-Hop, Soul, Nu-Disco and House on quality labels (Plaizir Musik, Smokin Beats, …), still in the groove!
Just pop it!

Soul Sugar drop their own reggae version of Marvin Gaye’s "I Want You".French outfit Soul Sugar – the brainchild of Guillaume “Gee” Metenier – deliver yet another soulful reggae 12”, this time a cover version of Marvin Gaye’s 1976 classic "I Want You". Jamaicain native Leonardo Carmichael sings lead vocals and legendary drums and bass duo Sly & Robbie add their flavor to the mix, with two versions on side B.Marvin Gaye’s single "I Want You" was a big step forward for his sound & vision and marked a change in direction – from hip Motown Soul to a more sultry, Disco sound. Marvin's vocals are notably intimate and the lyrics are more explicit, more personal. An original soul classic, "I Want You" is memorable for its unique combination of lush harmonies, a mesmerizing groove and the apparent sexiness of the theme itself. Soul Sugar's Discomix version combines a smooth mixture of reggae, soul and funk over beefy bass lines, designed for heavyweight sound systems. Sly & Robbie, rhythm duo known for their studio work on countless reggae classics since the 1960s deliver their version, taking us back to the golden age of Reggae, the days when it was typical for Jamaican musicians to record their own versions of American soul tunes ... Ace producer Jahno dubs the mix live and direct to tape, from his very own ' N.O.F Studio'.

Two years after an acclaimed first album, Al Sunny and Favorite Recordings proudly present Planets, carrying on their collaboration and bringing it to another level.Al Sunny is a young and talented singer/musician/composer emerging from the French soul music scene. During his conservatory studies, he refined his knowledge and confirmed his desire to write and compose. He quickly matured the music that he truly loves, inspired by artists such as Tim Maia, America, Al Green, and Al Jarreau. Giving birth to the majority of his compositions through his guitar, he always seeks to bring his songs’ melody to the forefront. During his studies he kept experiencing live performing on different scenes and confirmed his choice for a musical career, while also meeting many brilliant musicians, including Florian Pellissier, who later introduced him to Pascal Rioux and Favorite Recordings.It resulted in 2017 in Time to Decide release, a dazzling first album establishing Al Sunny’s music and writing style, looking towards the 70s and 80s Westcoast movement, infused with Blue-Eyed-Soul, Pop and Folk flavors. Built on the same influences, Planets is made of 8 new compositions (including a CD and digital bonus), and is clearly a continuation of its cadet, asserting Al Sunny’s talent and singing skills.Fully recorded live and analogic in Paris, this new album also stands out by an impressive level of production, faithful to some classics of the genre. Mixing catchy melodies, soulful vocals, warm and heavy bass, strong beat and beautiful guitars and keyboards harmonies, Planets just perfectly meets the AOR and Modern-Soul golden era standards.

Night Drive encourages you to enjoy the ride with your car windows down, and volume & bass at the highest volume possible. Cruise the back roads during Sunset hours, or through some city lights, as the album titled track “Night Drive” gives you a warm & fuzzy funky feeling from head to toe.“Moving And Dancing” will surely make you move every limb in your body, and it’s set to be a dance floor jam in 2018 & beyond. This melodic groove & retrofit tempo features Brian Ellis on guitar & Chini on Vocoder & production, setting the upbeat tone for the remaining tracks off the album. “Freak Out” features the iconic Linn Drum, who pulsates a heavy groov & Moog bass line from start to finish. Crunchy vocoder lines, soft pads from the Oberheim, and Chini’s experimental live drumming at the end is sure to make your body move.“High Life” brings an arrangement of synthesized vocal pads from the Sought-after Korg DVP-1, which will make you feel like your head is in the clouds. A four on the floor disco tempo from the LINN drum, a catchy delayed lead & dry bass line form a psychedelic tinge & feeling. This track sets itself apart, and hopes to please music lovers everywhere. “Waiting All Night” features Portugal’s underground Funk front man Sair, while Boy Dude (Adam Chini’s brother) lays a funky bass line over the top from start to finish. “Wanna Do Ya” is a track strictly for the Break dancers & Poppers. Layered vintage drum machines, Jonzun Crew sounding vocoder parts, and a dirty bass line, set an aggressive mood for the second to last track. Chini takes you on a wild ride, while closing this track out with his heartfelt lead solo. “Clap Boogie” was meant for the 1970’s. Chini drives the tune with a loose style of live drumming, Stevie Wonder influenced clavinet work, dirty bass lines, Brazilian instruments, live percussion, and more. Cruise in a low-rider & turn the volume up. This tune sets the tone for what’s to come from Chini’s future production & style, and will leave you wanting more.

** Available exclusively at The Pusher **After their debut album Space Voyage for Warner Chappell, Eleven76 are back with a new album commercially available for the first time entitled Occhio Occhio.The album contains insect-themed outernational grooves with tropical and Arabian flavours and smooth and buttered tunes with soulful vibes that are reminiscent of classic European library music. Vintage synthesizers and hot tape-recorded drums continue to lead Eleven76's mystique, with travels through funk territories and all the while frenzied percussion-heavy break beats keep b-girls and b-boys moving on the floor.Including the sold-out first two singles "The Scarab’s Quest" & "The Hornet’s Nest" plus 3 exclusive tracks for this vinyl edition.