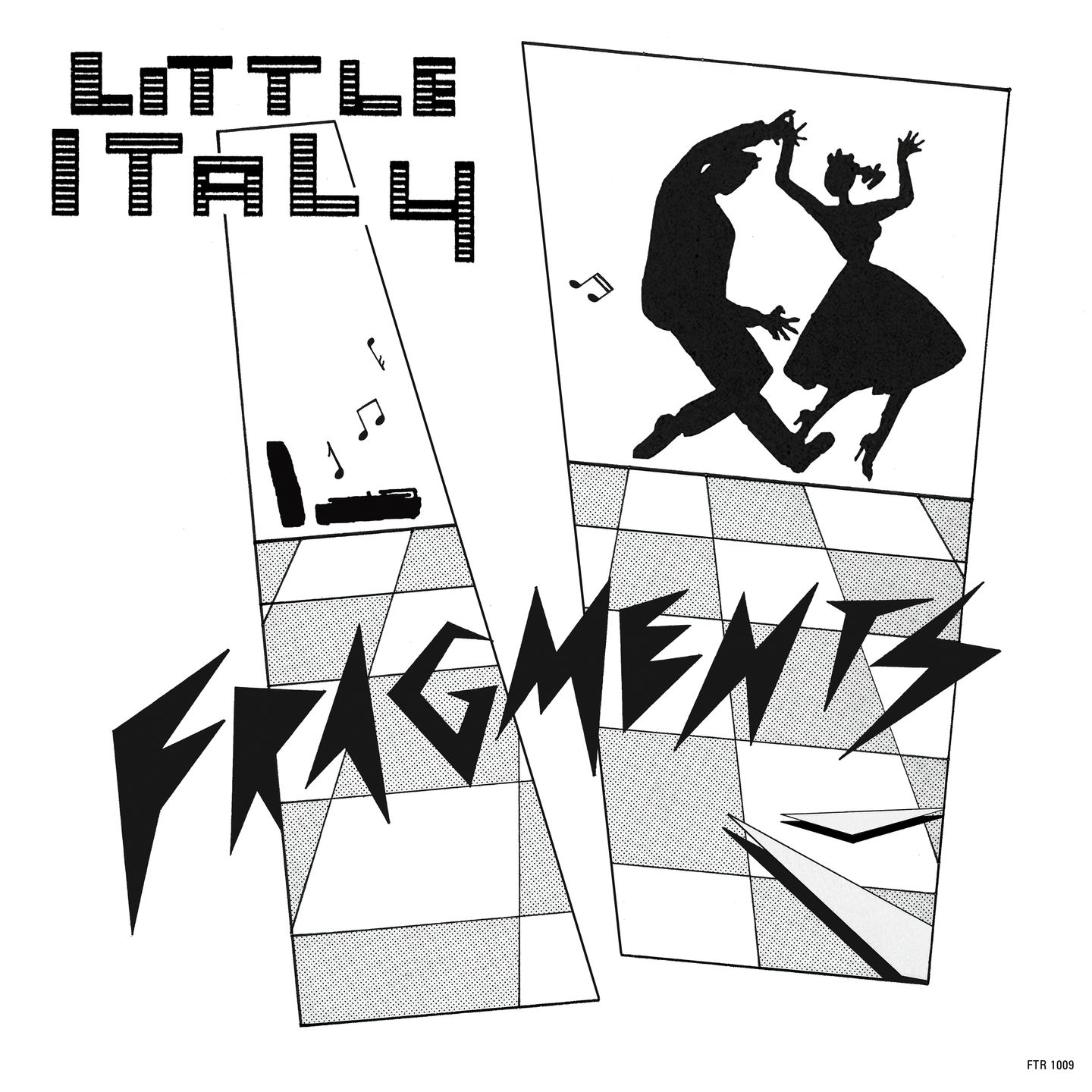 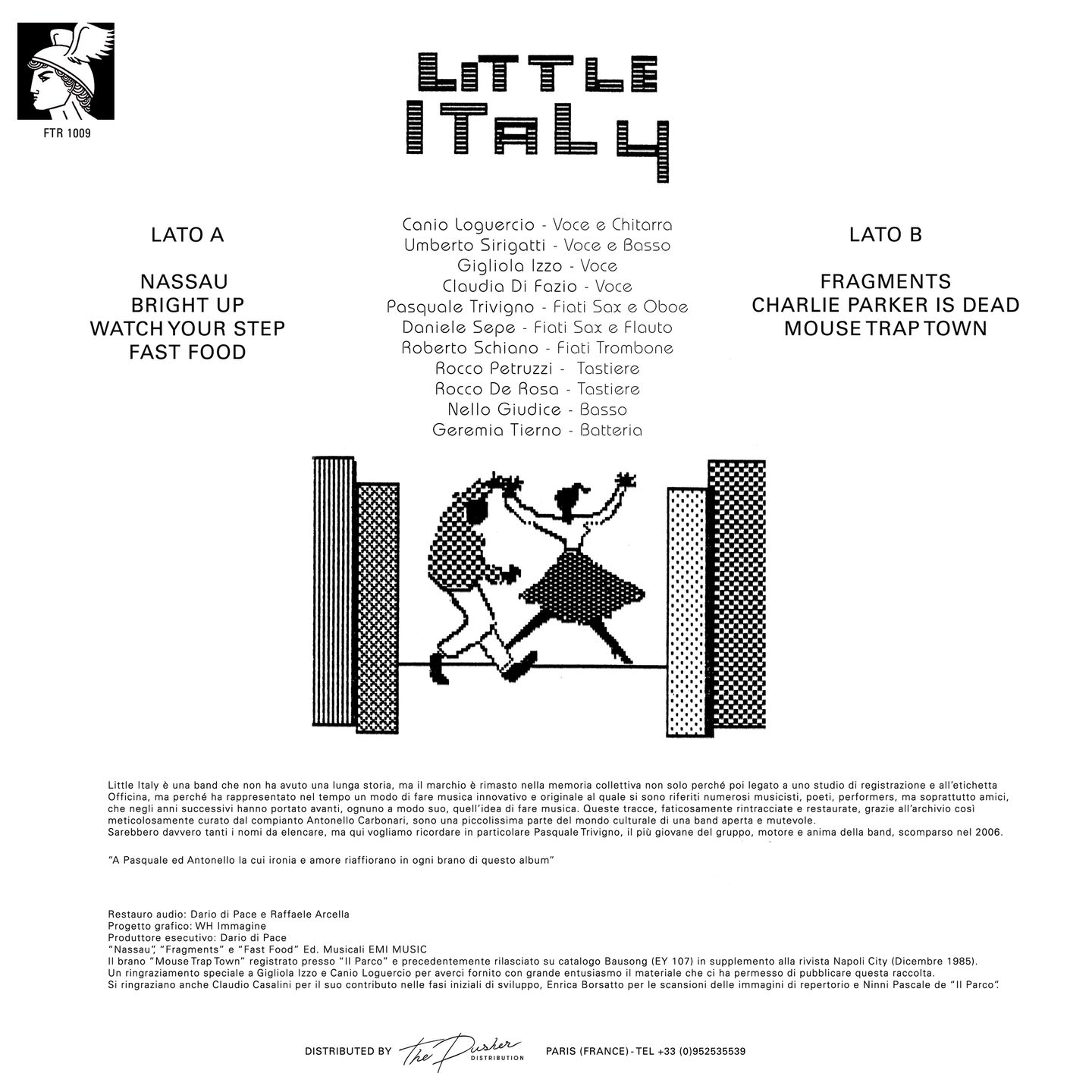 Naples 1982, the earthquake leaves rubble and dismay, unease and misery, smuggling and heroin.
The reconstruction is a shadow that will last more than a decade, it is a shady deal between bureaucrats and criminals.
Naples is an open construction site and the redemption was long coming. There was the "music-music" of the Neapolitan Power, which conquers the national limelight, and a dark and marginal enigma called "VESUWAVE" (especially for those who have not experienced it), that remains so, even after many years. Naples is not a country for young bands that are not familiar with tradition and "bel canto" while the record industry inhabits a platonic and incorruptible world beyond the vault of heaven. At that time five Lucanians and three Neapolitans founded Little Italy, probably a tribute to the homonymous district of New York and inspired by Talking Heads, Contorsions, Polyrock, B-52's, Konk and Liquid Liquid. They have the freedom to experiment and smash the stages of the Italian peninsula festivals more attentive to the new waves as well as participate in some television broadcasts. They basically don’t unnoticed but in spite of the apprenticeship and the kilometers covered in three years of activity (from 1983 to 1985) all they had the chance to record were a couple of songs.
Fragments is a compilation made with archived materials that Futuribile Records releases on vinyl after having discovered and restored old unreleased tapes from back in the day and made available by the band members themselves. Seven tracks that highlight a collective in continuous transformation and outline their drivers and abilities.
Little Italy have a horn section that gives them that chromatic vivacity, a typically mutant funk guitar groove, two fatal and dazed female voices who speak many languages (English, French, Italian) reciting collages of cryptic texts evoking modernity through no-sense and cultured quotations; a funk thrill in the basslines and drums solutions that give a nod to the sly disco beat of a specific easy listening, elegant and refined Italo sound. A super-sophisticated sound with the right dose of fusion, proper New Wave, which in the more New-Yorker passages recalls the volcanic and sweaty sound of the contemporary and fellow citizens Bisca, another out-of-the-box band member. The warm Mediterranean wind blowing on some tracks certifies their origin and the exoticism leads Little Italy to drink from that oasis of escape.
After all, the escape from a world that does not contemplate banality is the synthesis of the 1980s thought. (Words by Fabio Astore)

João Selva returns with a second album, a true hymn to creoleness and tropicalism, embued with flavors of funk, jazz and disco. An exhuberant travelogue diary featuring some shiny souls such as the sprightly Flavia Coelho and the multi-instrumentalist/producer Patchworks (Voilaaa, The Dynamics, David Walters, Mr President, Taggy Matcher). Cast off on a thrilling musical cruise with this Brazilian nomadic spirit, sailing freely on the mythical Black Atlantic.

After Sweet Sweet Dreams album, Jamwax is very proud to finally release D'Hardest on its original maxi 12'' format.“D'Hardest” was recorded at K.H. studios in Trinidad in 1980 and another version/mix was released on the Wake Up album. This song is everything, thanks to Winston Bailey aka Shadow and all his team.

Favorite Recordings proudly presents an exclusive eponymous LP by Brazilian singer and composer George Sauma Jr., originally produced in 1985. Imagine a never-marketed release on which you’d hear not only the beautiful and genuine George’s songs but also the work from two figures of the Brazilian Music Golden Age: Arthur Verocai and Junior Mendes! A much-needed album for all Brazilian connoisseurs. Back in the days, George Sauma Jr. was a young artist from Rio de Janeiro, learning on his side how to play chords and compose songs since he was 10. Still at the university, he’s influenced by Brazilian artists like Cassiano or Tim Maia, deeply fascinated by the arrangements and the “levada” (the groove) of all these new Brazilian songs. Simple and romantic music that resonated to his soul and creativity.Around 1985, the story took an unexpected turn. George tells: “Dna Deyse Lucidy, the mother of Junior Mendes was a candidate for deputy and went to my father’s company to advertise. When I saw her, I shouted, “I’m a big fan of your son!” ” Of course, she could not praise more the work of her son. On her advises, George went to his studio on Rua Siqueria Campos at Copacabana. Junior loved the project and sent him to Arthur Verocai to improve the arrangements. Without money, the decision was taken to record everything at Junior Mendes’ studio on an 8-channel mixer. It was a small set-up but the emotions were there! George surely had other plans for some of his songs but without the budget, they ended up doing everything the best they could. And they did very fine with a top-notch team of musicians: Paulo Black on Drums, Arthur Verocai on Guitar, Ricardo Do Canto on Bass and Helvius Vilela on Keyboards.Leaving the studio with the tapes, George tried to knock doors of international labels, but none did even dare to give him an answer. With less than 1000 copies pressed back in the days and without any distributor or label behind him, he went with proud to record stores, but received nothing than a strong reality check regarding the difficulties for a young Brazilian artist to achieve something on the saturated market of the 80s. Even for free, record stores didn’t want it. In the end, he ended up giving copies to friends and families, knowing deep inside that the songs were good! George tells: “I decided to leave, calm and conscious. I’ve still made three more albums, however on tapes, as it was more affordable. This time, just for my pleasure…”. Thirty-five years after, it’s with great emotion that this first album by George Sauma Jr. is now made available as Vinyl LP with its original offset printed innersleeve & CD.

Born in 1949 in Recife (Brazil), Roberto De Melo Santos, despite a very light discography, is among the true icons of the Brazilian Soul music under his artist alias, Di Melo. He’s indeed only needed an eponymous album, released in 1975 on Odeon, to assert himself as a star in his native country, but also as a legend for all collectors and connoisseurs of the world. More than 40 years after its release, this famous album sells for several hundred euros in its original version, and even for the few reissues that were offered. Not very active since then, Di Melo however returned in 2016 with the album O Imorrível, released on the Brazilian label Casona Produções.It is then that a year later, came a meeting with the French group Cotonete, that Florian Pellissier, founding member and keyboard within the band tells us about: “On tour in Brazil with Cotonete, we had a few days off in Sao Paulo and I really hoped to make a collaboration with an important artist or band from the Brazilian funk scene. We had thought of Marcos Valle, Meta Meta or Ed Motta... but Rafaela Prestes our Brazilian "sound ingineer/genious" told me she’d worked with Di Melo for his recent comeback and gave me his number. No sooner said than done, as I'm a huge fan of Di Melo. The next day he arrived at our house with Jo, his wife, and Gabi, his daughter. He takes the guitar in front of us and gives us a private show of 3 hours… we cried the tears of joy. He had 400 original songs never recorded, a gold mine. On the same night, we started working the arrangements for 2 days, followed by a rehearsal and two small gigs in Sao Paulo. Immediately after, we recorded in the magical Epsilon B studio. This album is the summary of this moment, of these 5 days of madness spent together between “the best band in the world” and the legend Roberto Di Melo… Simple, beautiful, Brazilian-French, human music…”Today, Atemporal found its final version in collaboration with Favorite Recordings and is proudly presented as what we believe will become the genuine long-awaited follow-up to the classic Di Melo’s LP.

"What you have here, pouring out of your listening devices, is Parisian Dreams. A genre-busting, generation-spanning, cross-pollination of 21st century beatmaking and 1970’s psychedelic composition. The styles are myriad. Running the gamut, between acoustic folky guitar riffs, through fuzzy movie-soundtrack textures, hitting grooves that land somewhere between dub and funky breakbeat jazz. MPC producer Yeti recently found himself in a session with one of his musical heroes, Janko Nivolic. A veteran composer of psychedelic funk and jazz dating back to the late 1960’s. In his digging and sampling obsession Yeti had marvelled at the compositions of Mr Nivolic for years, collecting these rarities, mostly found on obscure Library records. The title ‘Parisian Dreams’ is highly significant as is explained in this anecdote from Yeti. “At the session that I was involved in with Janko in Paris, he showed up with a score that he had conceived while dreaming the previous night. He awoke at 5 AM, scribbled it down immediately and brought it with him to the session. He didn’t need to take it over to the piano, to check if it made sense. He just knew it did. Blew my mind!” So, sit back and absorb these magical sounds from the sub-conscious of an 80 year-old musical legend, combined with punchy beats, from a revered MPC pad-tapper, specially designated, to give your woofers a workout. DJ Ollie Teeba". (Text by Soundsci/The Herbaliser)