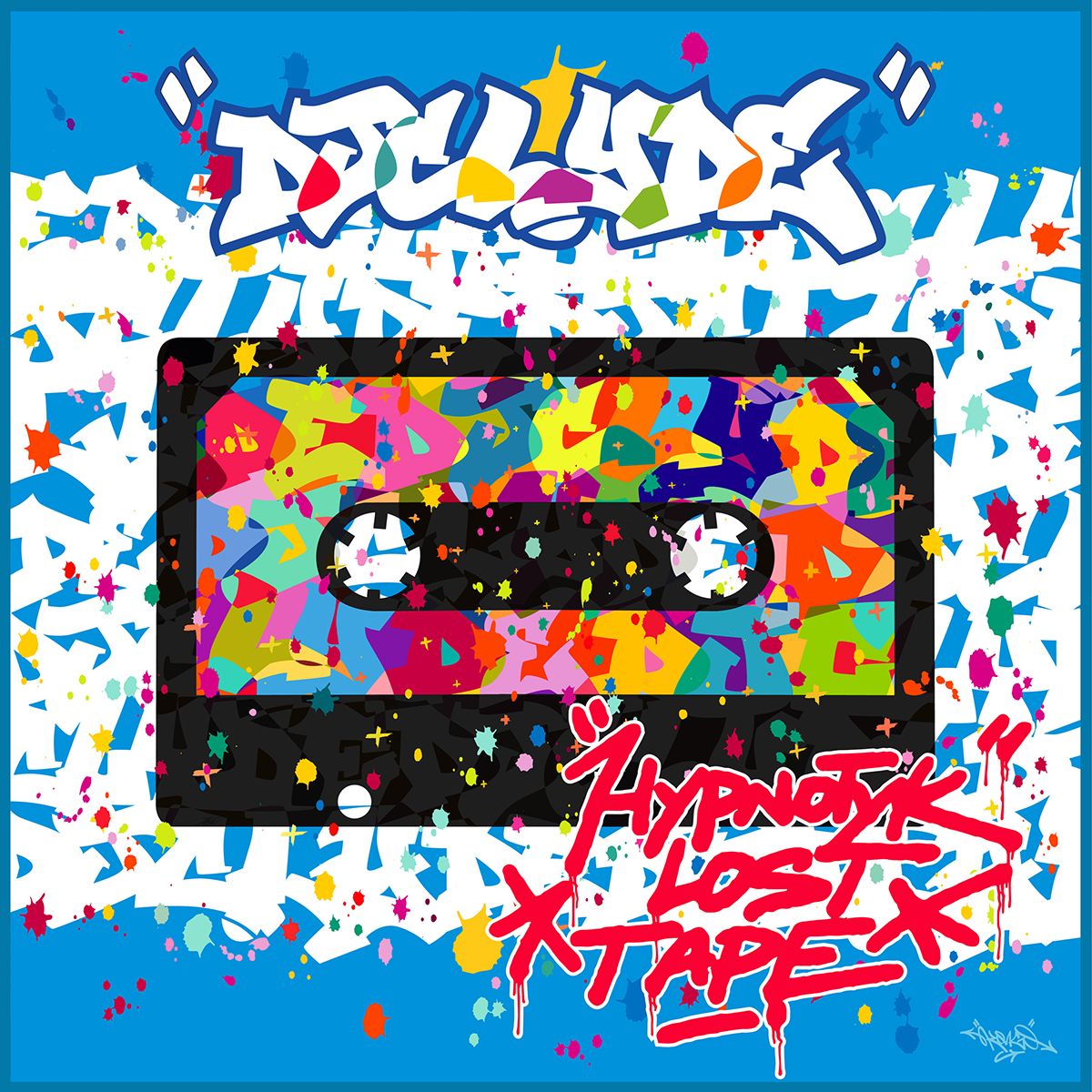 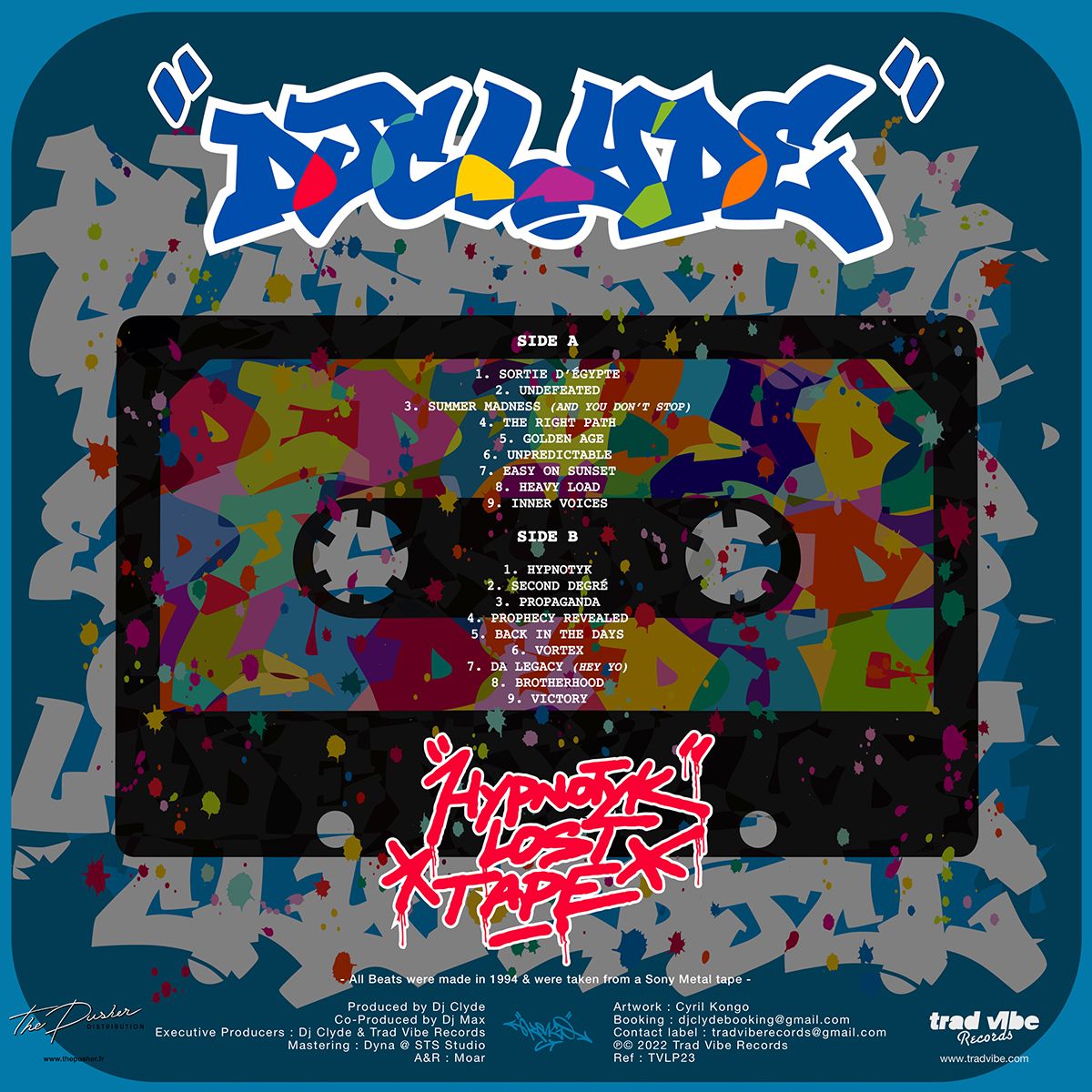 Trad Vibe records is happy and proud to present you this project as well execptional as unpublished!

We are in 1994, DJ Clyde left the group Assassin and launched the 1st French Mixtapes but he sees even further and launches into the production for the 1st time since he became a hip-hop activist. His set up seems very simple but unusual and innovative for the time especially in France with a SP1200 and two S950 and a maximum of Soul, Funk, Jazz vinyls that he digs with his crew Hypnotyc Djs (Dj Clyde, Dj Max, Dj Asko). The project is also exceptional because it comes from a cassette archived by Clyde of beats sent for the album Paris Sous Les Bombes of the famous group Suprême NTM (3rd album of the group).

Of course you will not find the beats released with his last but all the unselected gems that reveals the talent and the advance that Dj Clyde had taken in the production at that time! More than an instrumental album or beat tape, this project is a testimony of the history of Hip-Hop and moreover of Beatmaking in France in the 90s which was not supposed to see the day.

The cover is made by the talented grafiti artist Cyril "Kongo" of the famous and historical crew of graffiti artists MAC (founded in 1986 in Montreuil).

Back In The Days

Star Wax, the famous French magazine, invites Diggers Factory for its 3rd compilation on vinyl. And what a compilation! We are proud to offer you exclusive tracks and quality music with this funk / hip-hop / oriental compilation, with tracks from 1976 to 2016 by artists such as Geraldo Pino, Chayeb Chbab, Janko Nilovic, 47Soul, Quiet Dawn, Sa’Bat Machine & Tam Ly, Ahmed Malek, Last Bongo In Paris, or Doc Strange.

A Bunch Of Funk…

Marrrtin, French DJ, producer, and half of the group FUNKY BIJOU presents A Bunch of Funk, a selection of 16 short but sharp tracks building on the artistic heritage of 70s Library music. Album created with several musicians from different countries, working together without ever seeing each other in a studio thanks to Marrrtin's unique production process.Uptempo, Rhythmic, Brassy, Percussive, Lively and Dancing Vocal, Thematic Dramatic, Activ, Perky, Agressive, Riffy and Groovy: these are the words who can define this album.Features apprences of: Medline, Felix from FUSIK (USA), Carla Vallet, Tchoubine Collin (Setenta, FR), Romain Baousson (Bikini Machine Drummer), Naufalle from AIWA (France / Irak), Deheb , Meriadeg (Stand High Patrol) and others...All the Tracks have been played for the RED BULL BC ONE world final in Roma where Marrrtin was mixing.

After a series of funk and jazz flavored singles and production credits for the likes of Large Professor or Diamond D, The Funk League, aka Hugo and the Soulbrother Suspect, is now ready to spread more groove with the release of a full length album this fall, "Funky As Usual".Both from the east side of Paris (20th district), rare groove connoisseurs and vinyl collectors, Hugo and Suspect would eventually meet half a decade ago at the later then-gig (with label mate and collaborator Cleon in the lineup), the "Soulbrothers Break Party", an event where Paris top notch breakdancers and latin/funk listeners would gather round monthly during four years.Quickly, the two began trading records and gathering their best breaks to improve each other productions and DJ sets. They would ultimately record a few demos together, one emerging as their first single as The Funk League, "On & On", featuring Bronx legend Sadat X from Brand Nubian, in 2009. The release featured some tight up-tempo rhythm as well as cold chilling boom bap tracks with swinging sleigh bells, establishing their sound identity, courtesy of that vintage and crispy SP1200 sound, analog equipment and precise turntable wizardry.Still developing this formula, the League then released another EP, this time with Diamond D, Sadat and Andy C on the mic duties on some jazzy baselines and swinging drums, and a 7" single with Swedish crew Speech Defect, showing skills on the deep funk tip. As Hugo and Suspect kept working together on a daily basis, it began clear than the collaboration would go beyond singles and EPs, and that it would give birth to a full length album. "Funky As Usual" is this collection of grooves, covering that three year time span as if it was a single day - and night. A day in the life of two funksters, but also a blend of the duo’s favorite tunes and flows, put together with a precise production trademark (highlighting strong influences of Jazz, Fusion and even Brazilian music), and a subtle sequencing of the songs and interludes through the whole album, thus creating different atmospheric tones and patterns.Same goes for the mic duties, handled by no less than Large Pro, Diamond, Sadat, Gift of Gab from Blackalicious, but also underground favorites Ugly Duckling, Abdominal, or even songstress Kylie Auldist from Aussie funk sensation, The Bamboos, on an all-acoustic acid jazz track performed and co-composed by label mates, The Joyous Juice.As vintage sound doesn't necessarily mean nostalgia, "Funky As Usual" appears as a 2011 update of those legacy sounds we continue to love, from modal jazz to deep funk to nowadays hip-hop or broken beats, holding down the groove traditions for now and beyond.

Bomb alert ! After the first fantastic collabo between french dynamic duo Mister Modo & Ugly Mac Beer and American MC Crimson Alchemist, the time has come for those three to team up again. The result is another amazing 45. Both sides are equally dope. If fall 90s hip-hop is your Line, then you defo should grab a copy or two.