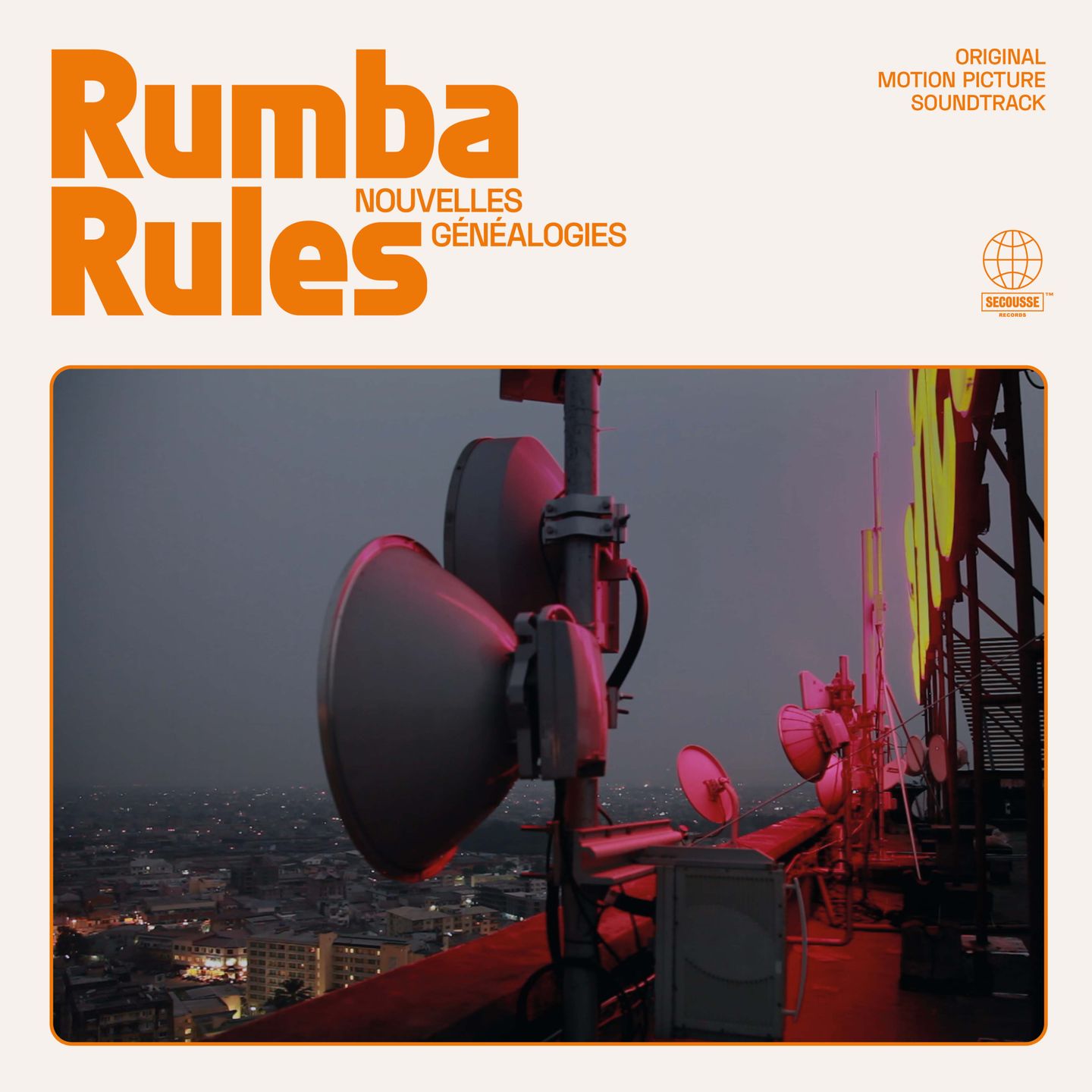 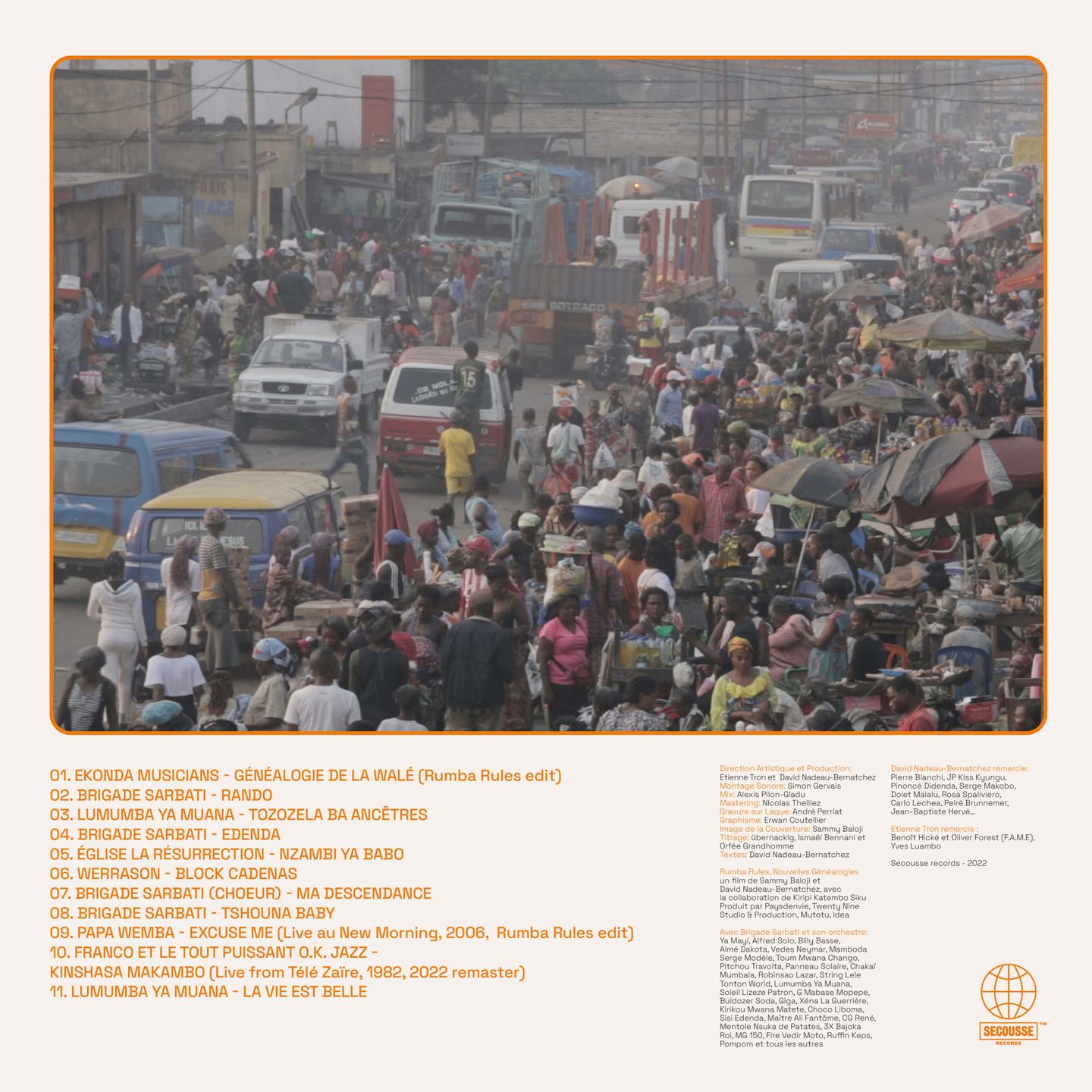 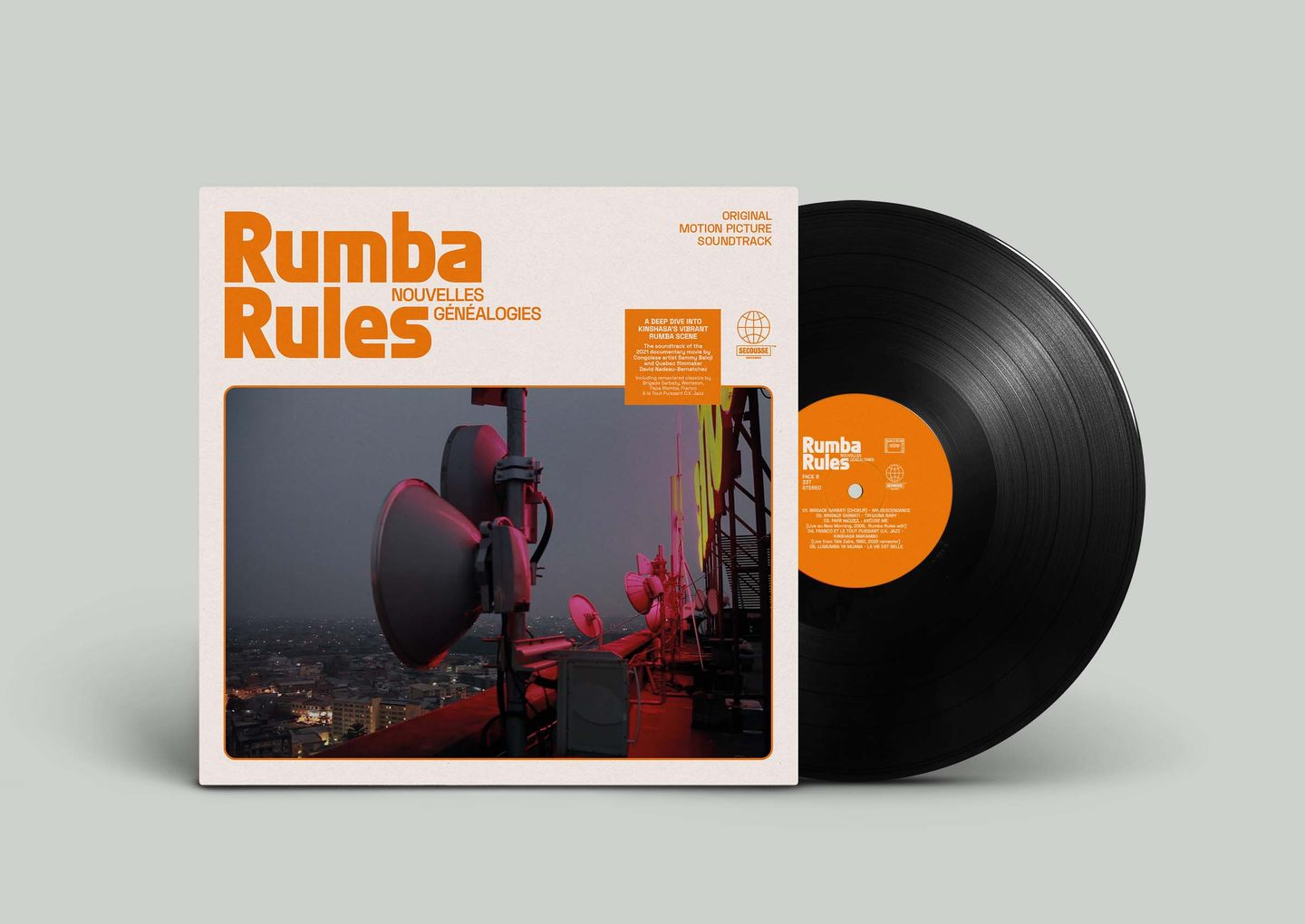 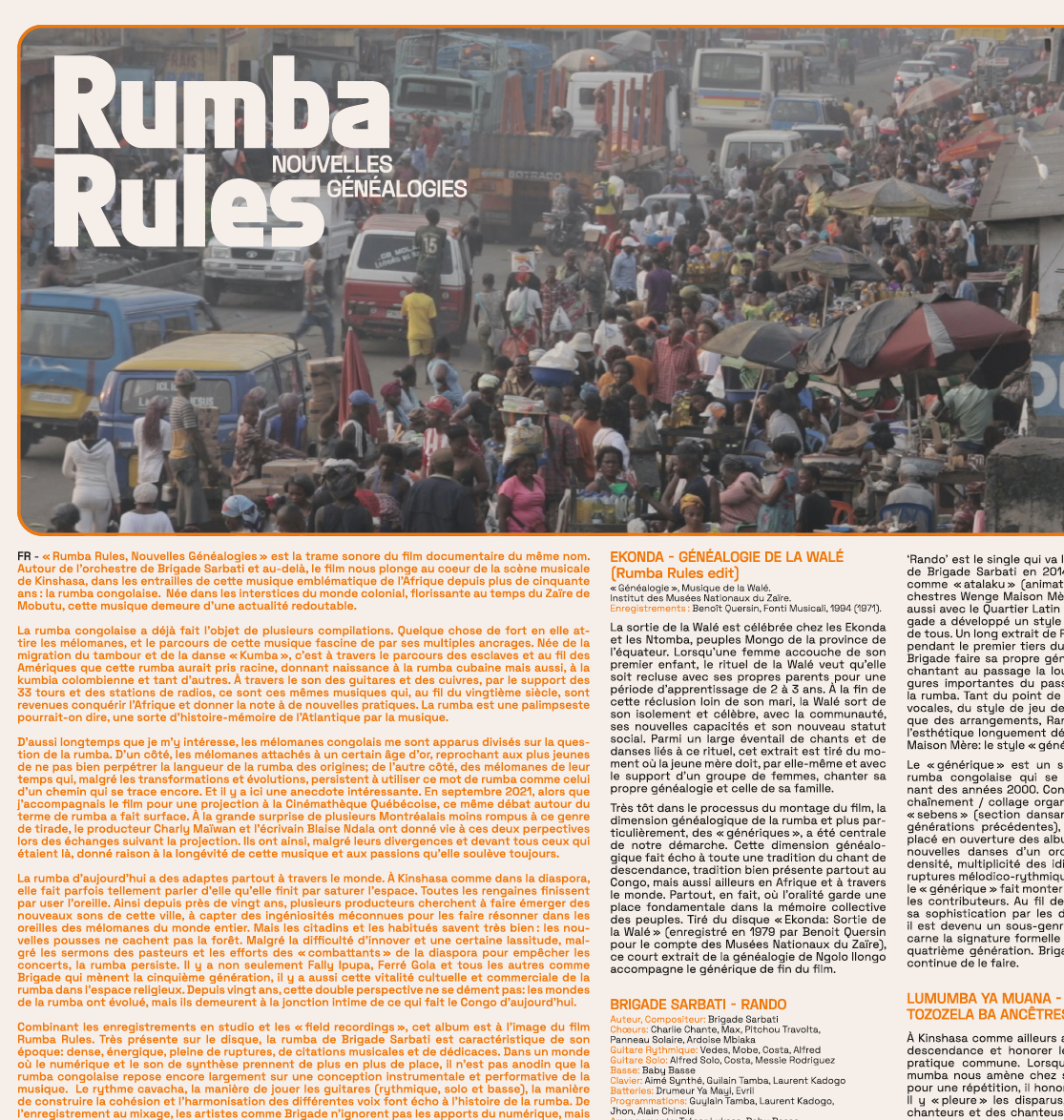 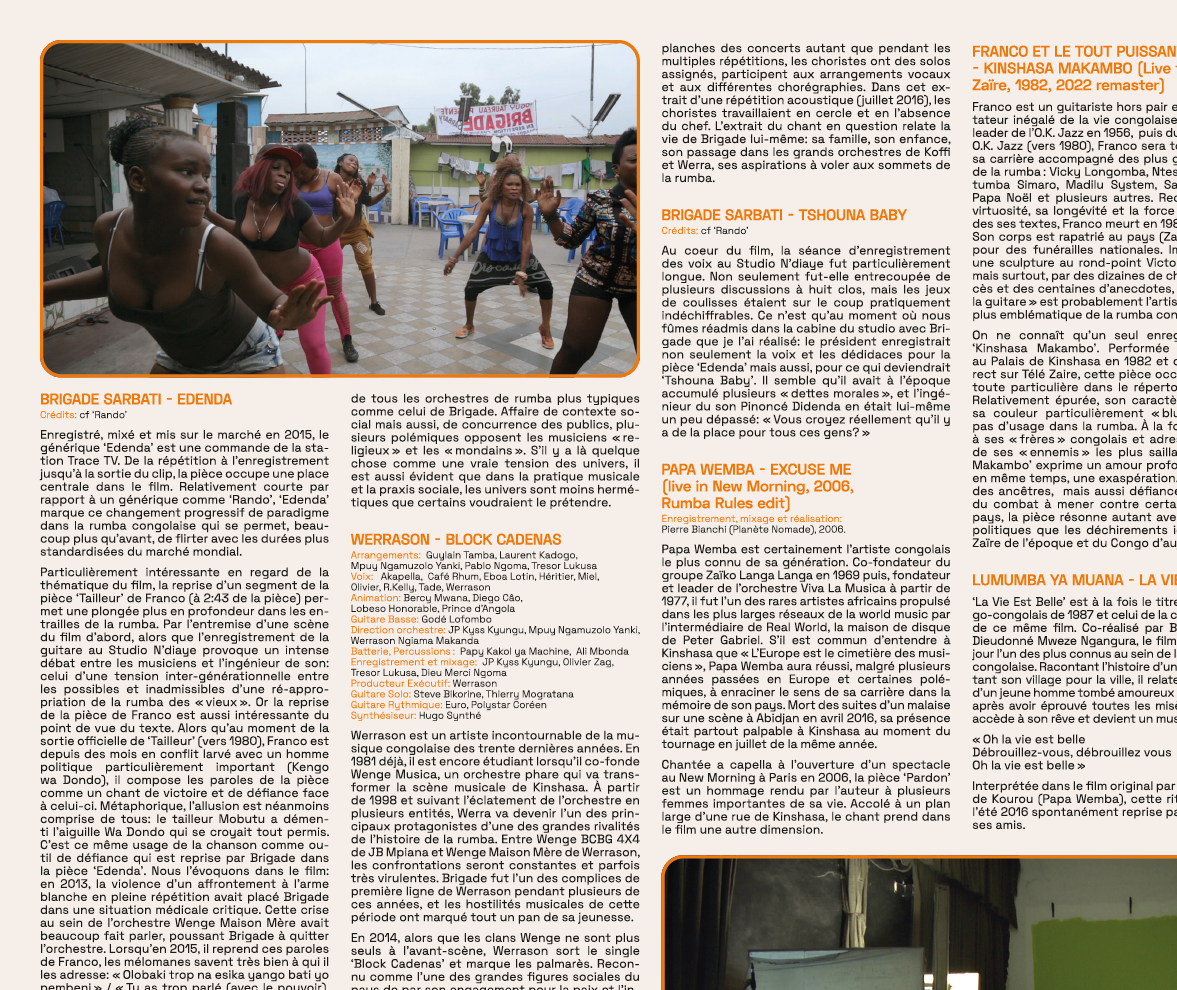 Rumba Rules, New genealogies is about contemporary rumba in Kinshasa, but this music has deep historical roots nevertheless. Born in the interstices of the colonial world and thriving during the three decades of the Mobutu era in Zaïre, Congolese rumba has been iconic and popular all over Africa for decades. The roots of Rumba are even deeper, and the many paths it evokes trigger the imagination. The story goes that this music came with the migration of the ‘Kumba’ drum and dance in previous centuries, African slaves having carried it all around the Americas and giving birth to Cuban ’Rumba’, Colombian ‘Kumbia’ and many others. With its varied rhythms, guitars and horns, through LPs and radio stations, Rumba came back to (re)conquer Africa throughout the 20th century, paving the way for new practices. One could say this music is a sort of palimpsest, a memory in itself of Atlantic migrations and histories.

Rumba is nowadays discussed all around the world, igniting many debates among the Congolese diaspora. Being the constant talk of the town sometimes overloads public debate, and many people get tired of this broken record. Thus, over the last decade, enterprising producers have worked hard to promote Kinshasa’s musical diversity and tried to emulate new sounds to reach worldwide attention. But Kin’ locals and urban dwellers will not be fooled : new shoots cannot hide the forest. Despite some difficulties to innovate, despite the pastoralist sermons and the diaspora fighters pushing for concert cancelations, rumba is still at the core of the Congo today. Talented artists such as Fally Ipupa, Ferré Gola, Brigade Sarbati and others are leading the fifth generation, and the religious world has also proven to be a nurturing environment for the cultural and economic dynamism of this music.

Focusing on the music of Brigade Sarbati and his Orchestra, this record offers a deep dive into Kinshasa’s rumba scene. Halfway between professional studios and Zoom H4 field recordings, the rumba herein is about today’s youth: dense, full of energy and breakdowns, insights and name-dropping. The cavacha rhythm, the solo and bass guitar’s playing style, the singing style and numerous dedications all resonate with the history of Rumba. In an era where digital sound is taking over, it is interesting to highlight the instrumental and live performance compositions of this music. Digital technology is indeed used during the recording and mixing phases, but Congolese rumba still relies strongly on instrumental playing. There is all that but also, many other things to hear on this record… It’s time to let it be. A big thanks to Étienne Tron for making it possible: it is on his initiative and through his patience that this album is in your hands today. (David Nadeau-Bernatchez, december 2021)

Vaudou Game is a contemporary live band of 6 members playing an authentic Togolese funk based on voodoo chants scales, and led by Peter Solo, a singer and composer born in Aného-Glidji (Togo), birthplace of the Guin tribe and place of the voodoo culture. He was raised with those traditional values of human and environment respect.Apiafo is a 12 tracks album, entirely recorded, mixed and mastered with old analog tapes, and played with vintage instruments, recalling the sound of bands like Poly-Rythmo De Cotonou or El Rego! Peter Solo invited his uncle, Roger Damawuzan, famous pioneer of the 70’s soul scene in Togo, to sing on “Pas Contente” & “Wrong Road“. The result of their collaboration is without a doubt two amazing future dancefloor classics! The idea of integrating these haunting lines, sung in honor of the Divinities, to an energetic 70's Afro-funk style, was, in Peter Solo's mind, an obvious extension of the analogy he found between the voodoo tradition and trance inducers such as Soul, Funk, as well as the Rhythm ‘N Blues of James Brown or Otis Redding.Vaudou Game will be touring all over the world next year promoting this new Afro-Soul classic album!

Wan Chai Records is a Hong-Kong based label, specialized in rare Asian records and quality reissues.After a few years of hard diggin’ in Asia, meeting the artists and many local figures of the 60’s, 70’s and 80’s Scene in Hong Kong, Singapore, and Taiwan, they wanted to share their best finds and put them together on vinyl with the best productions ever made in Soul-Jazz, Disco, Funk, Modern-Soul, and AOR.The result is a selection of 10 totally unknown gems sung mostly in English and Cantonese with amazing covers of classics like “Lovin’ You”, “Make Me Believe In You”, or “Hurt So Bad” in a nice Artwork Gatefold LP.

Completing the recent LP reissue of Black Voices by Tony Allen, Comet presents a 2 tracks remix EP by Folamour and NIT. The two rising French producers provide great new versions of “Get Together” and “The Same Blood”.FOLAMOUR: Behind this surprising name is hidden one of the main House producer and DJ from France. Label manager of the amazing record labels Moonrise Hill Material and FHUO Records, the artist using lots of different aliases has already burnt most of the best dancefloors in Europe and beyond. 2017 has been an important year in his career with releases on Church and Glitterbox labels, and a debut album on Moonrise Hill Material and Classic Music Company, after a whole series of successful records on quality labels such as All City Records, Fauxpas Musik and Sleazy Beats Recordings. Working on his second album after two EPs upcoming soon, it makes no doubt that it's only the beginning for Folamour.NIT: NIT is the studio project of the French musician Corentin Kerdraon. After several years working at radios in Paris he released a first EP called Dessous de Plage in May 2017, displaying condensed grooves with multiple references, from Jean-Claude Vannier to Dam Funk... Alternating Pop projects and more experimental compositions he's present on different musical scenes as keyboard player and producer. He has just recorded an EP for the American singer COLA BOY released in spring 2018 on the French label Record Makers.

Forward Kwenda was born in the Buhera area of Manicaland, Zimbabwe. This area is known for its fierce resistance to colonial rulers and respect for Shona tradition. Forward Kwenda has always played Mbira, for the spirits, the ancestors, the land of Zimbabwe and the world around it. An undisputed master of this eminently spiritual instrument, he has developed a complex and unique melodic technique that has led him to perform and teach in the United States, Europe and Japan.The EP Chawapiwa is the result of a collaboration with two of his students: Yann Dubois and Shiho Manabe.The B-Side of this 12” is a remix and a loving tribute to Zimbabwe by Dj Oil, a french producer and dj, and a true veteran of the underground music and party scene in his native Marseille, Lionel Corsini, aka DJ Oil released his well-received solo debut as recently as 2012 (Black Notes for French label Discograph) but is probably better known as one part of The Troublemakers, who had the (probably unique?) distinction of being signed to both the legendary ‘90s house label Guidance and the most famous of all jazz labels, Blue Note. The cover artwork is taken from Georgina Maxim's work: "Letters I wasn't supposed to read". Presented as textile sculptures like a diary made from second-hand clothes, the pieces bear the history and memory of the ghost corps that once wore them. Georgina Maxim lives and works in Zimbabwe where she founded the artistic collective, Village Unhu.The visual adaptation and screen-printing was done by Vivien Le Jeune Durhin from PPP studio, Paris. This is a screenprinted limited edition release of 100 copies.