Moar
Back To The Boom Bap 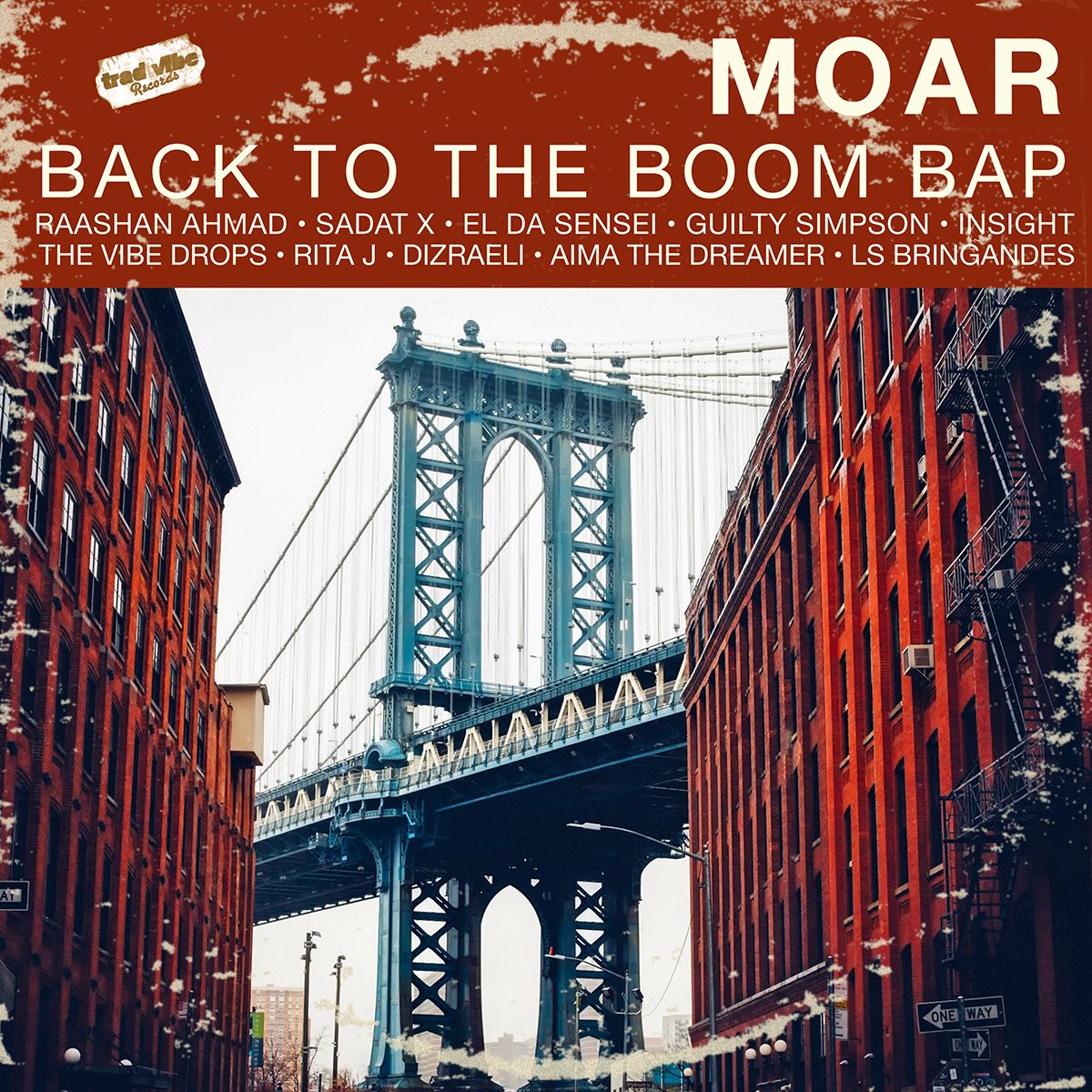 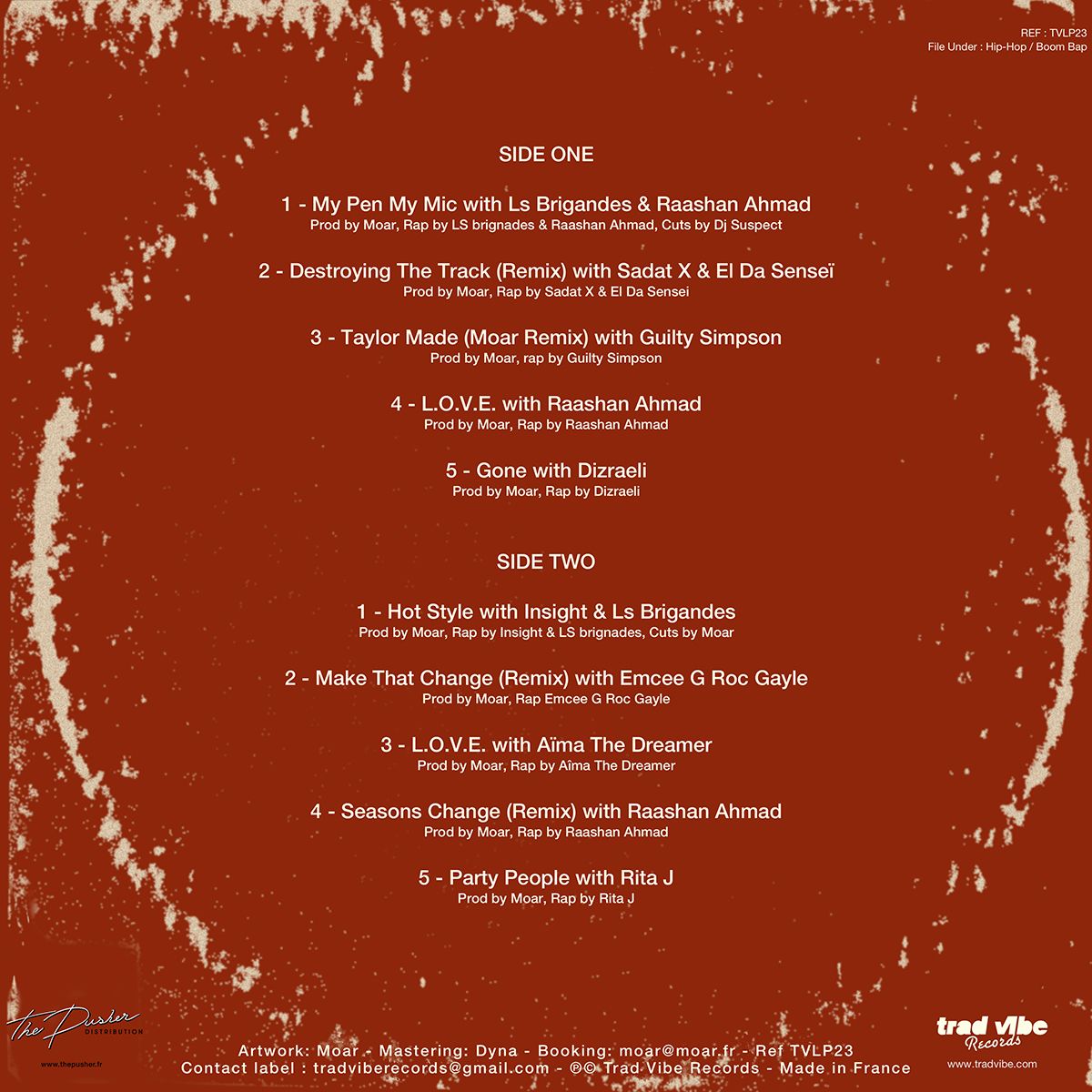 This album is a return to the collaborations of Moar with unreleased versions on vinyl and also rare tracks. You will find the boom bap flavor that he likes so much in his hip-hop productions and also some names familiar to the label Trad Vibe!
10 tracks with delicious flavors that will make you travel in time all produced by Moar and his faithful MPC & SP1200.

L.O.V.E. with Aïma The Dreamer

You have to know how to move away from the rich, strong and noisy streets, if you want to discover another Havana. A Havana far from the tourist circuits and preconceived images. A Havana where one discovers bucolic, but hard and stripped too after slow journeys in the crowded buses, a Havana with which Al Quetz maintains a passionate history since more than fourteen years.Installed in one of those neighborhoods that can only be reached by going deeper into the alleys, from the open window of the studio comes the sound of banging drums and thumping bass. The sound reaches the streets on which the day rises.The place wakes up in a growing tumult, with some rare engines coughing, conversations under the windows, songs of the street vendors , an urban ballet sets up as the sun darts its rays.Far from the musical clichés with percussions and horns, Cuba is an island bombarded with influences that one discovers. An island which vibrated for the jazz, the soul, the psychedelic rock , from the waves coming from the Caribbean to those of the bulky neighboring ogre.A musical flowering as varied as abundant that the glorious post-revolutionary label Areito has on thousands of recordings, and that Al Quetz has designated as the sole source of his samples to compose Habanologia.From the ambiences that punctuate the local daily life caught by his samplers, he let the melancholy infiltrate his hip hop beats, the nostalgia melting in the depths of his grooves. Nostalgia in the Cuban air, even during moments of intense laughter, which never totally disappears.Habanologia restores these moments when the song of the birds has extinguished those of the cars. Where, sitting on a doorstep, we comment on the life of the neighborhood, we watch the women's swaying at eye level. The whole day if necessary, the coffee at one peso, after a certain hour, which leaves its place to the Planchao rum. Wandering through its streets where a chance encounter can itself bring others and lead to the essence of the habanera life. From Regla, after a short trip on the bus-boat that crosses the bay, savor the end of the day, observe the capital from afar, let the nocturnal insects ensure some arrangements and drift towards mysterious horizons, bringing to the contemplation of the place and the moment.A flute, a keyboard, percussions or a voice. Al Quetz also invited his friends from the island or elsewhere to decorate his productions with their live touch. To share with him this Havana for which he covered his tracks, mixed times and distorted space-time to make it timeless.To write with Habanalogia, a declaration of love to the Cuban capital, to make Havana, His Havana.

10 tracks of beautiful Hip Hop music produced by Vienna Producer Mez & French producer 20Syl. "We made this album after running into each other on tour in Brazil then again in France. We kept talking about needing to do a project together then eventually met up on my homies farm in Southern Oregon in the U.S. and made this record. Being in the same space and recording in the age of sending verses back and forth seemed a bit crazy in a sense but we really wanted to catch a real vibe of 2 mc’s in sync and where a real moment and connection was captured. We spent 7 days eating bomb food, living, laughing, writing, recording, and just vibing.We asked for beats from a bunch of folks but ended up feeling the overall vibes of Mez, a Vienna based producer who I previously worked with on my solo material and whose beats just hit us and Rita as the perfect instrumentation to the album we wanted to create. The incredibly talented homie 20Syl (Hocus Pocus, C2C, AllttA) who I also had worked with before and who Rita collaborated with on his group's (C2C) album came in with 2 joints to round it out. We also got some amazing features from our folks Destani Wolf, Wes Restless, and the ever dope Georgia Anne Muldrow."LP Vinyl include two exclusive remixes by Moar & Mossy P

Otis Stacks is a collaboration between Michael Munch (aka JustMike), a producer from Denmark, and Elias Wallace a singer songwriter from Pasadena, California. The music is analog synth based soul with undertones of the hip-hop culture that both grew up in.Otis Stacks sound was conceived out of JustMike’s growing collection of vintage analog synths. As he collected old analog synthesizers, he experimented with new sounds and created a sparse soulful sound. During a tour through the French Alps with Elias and the Danish band Dafuniks, Elias and JustMike recorded a song that later would became “Fashion Drunk”, the first single off of their EP The Break Up. After hearing the sound that they both came up with they formed Otis Stacks and wrote and recorded songs in Nice, Montpellier, and Paris, while touring France.Otis Stacks use of analog synth sounds and Rhodes piano give it a distinct sparse sound. It is soulful and hearkening back to an older more pure time in music before over processing and auto tune dominated the approach. Elias adds thoughtful, emotional lyrics and strong melodies to the mix. It all works together to create meaningful songs that explore loss, pain, and longing in the sometimes vacuous and hedonistic nature of the music world.

Finally the debut full length LP from Aeon Seven is upon us!After a production career going back to the year 2000, this French maestro has been a creative force in all areas of production, DJing and animation.First gaining some serious attention from the funk/breaks community worldwide with his exceptional Funky Furious EP (2005), he has gone on to produce a clutch of incredible mix tapes that beautifully reveal his deft touch on the turntables and in the studio, he's written a couple of singles for 45 Live Records and produced some slick DJ tools with the Thundercuts series on both 7" and 12".Throughout all this time Aeon Seven has been honing his craft both musically and visually. His love of the instrumental, and obvious love of soundtracks, psyche and jazz come through in all of his productions. From the downbeat and wonderfully eerie and atmospheric themes of "The Hidden Hand", the cosmic harp led soundscape of the opening track "Outer Space Illusion" to the uptempo and funky blaxploitation vibes of "Mankind Hunt", Aeon Seven's grasp of songwriting is mature and expertly executed.