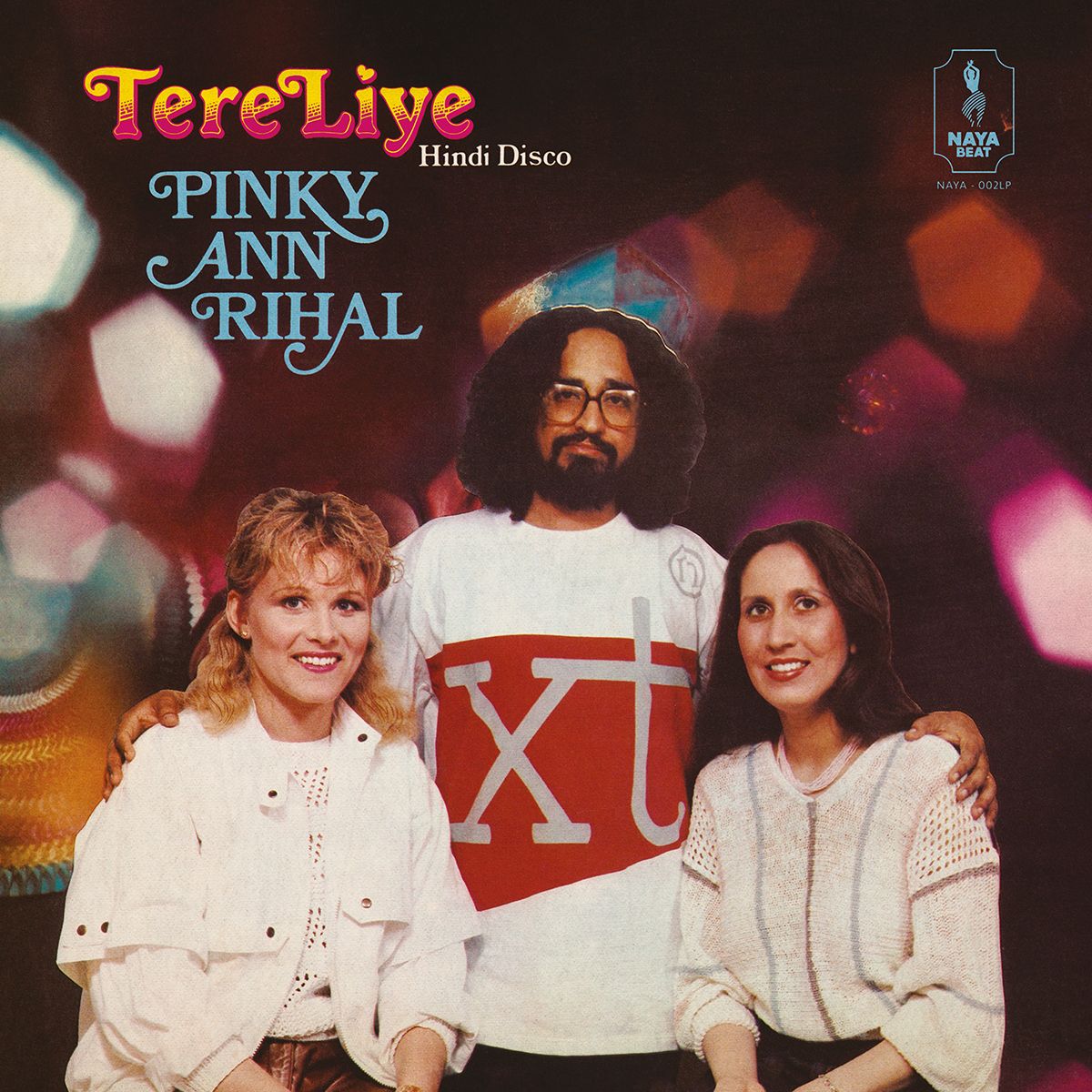 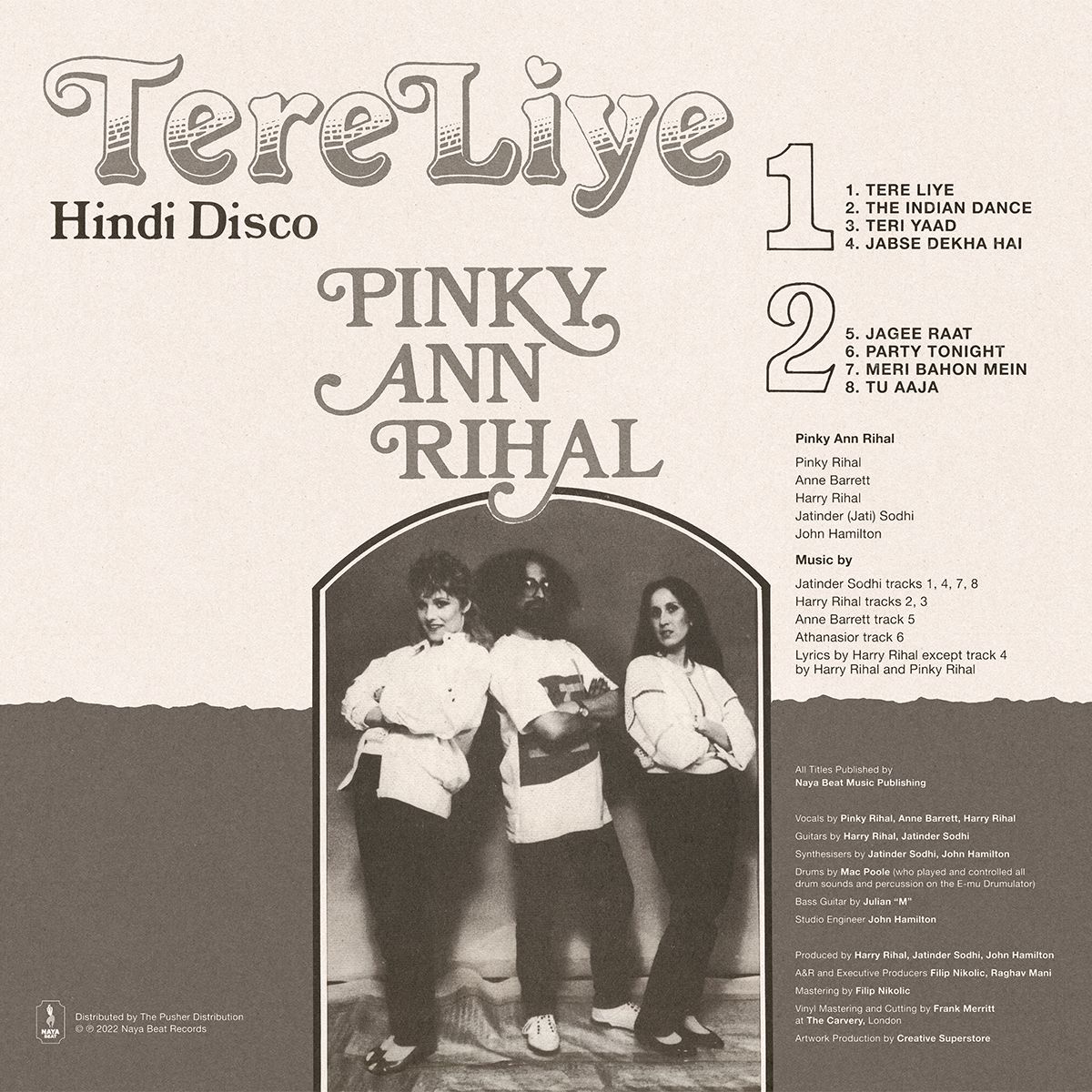 Cult South Asian New Wave! Naya Beat is proud to announce its second release, Tere Liye, the highly sought after and impossible to find New Wave album by the unsung pioneers of the British Asian music scene, Pinky Ann Rihal. Remastered for vinyl by multi Grammy-nominated Frank Merritt at The Carvery and available for the first time since its limited 1985 release, the album is as fresh and relevant today as it was 37 years ago.

South Asian New Wave. Four words that you will rarely see together. Pinky Ann Rihal were the brainchild of two London-based Punjabi immigrants and progressive rock musicians – Harry Rihal and Jati Sodhi – at a time in the U.K. when progressive rock musicians were almost exclusively white and Punjabi musicians were almost exclusively making Bhangra. Encouraged by their friend and disco pioneer Biddu (yes, that Biddu!), they cut ‘Tere Liye’ – a one-off Hindi-language New Wave album with producer John Hamilton and vocalists Pinky Rihal (married to Harry) and Anne Barrett (married to John). It is an album that exemplifies the cultural collaboration and musical synthesis of the time. Complementing the rich, cosmic and layered synths and drum programming of Hamilton and the distorted guitars of Rihal and Sodhi are the Hindi lyrics of vocalists Pinky and Anne. The result is an amazing one-of-a-kind South Asian New Wave album. Nothing like it has come out before or since.

Stymied on its original release by bungled distribution, poor marketing and plenty of bad luck, this incredible album seemed destined to be lost to history. With Asian electronic music in the U.K. seeing a rebirth and capturing imaginations around the world,‘Tere Liye’ can finally take its rightful place as one of the pioneering albums of the Asian underground.

This is Naya Beat’s second release in a series of reissues, reworks and remixes, and compilations dedicated to uncovering electronic and dance music from the overlooked ‘80s and ‘90s South Asian music scene. Their first release Naya Beat Volume 1: South Asian Dance and Electronic Music 1983-1992 was named by the Vinyl Factory as the Number 1 reissue of 2021.

For his first solo EP, Tushen Raï designed a record in the form of a colorful patchwork of sounds, a meticulous collage of samples, surrounding noises and synthesizers. Here, Maori percussion dug on field recording discs from the late 60s and 70s meet Indonesian chants recorded on phones and posted anonymously online. A nostalgic yet deeply contemporary testimony to an imagination weakened resulting from the cultural globalization. With Drums Circles, Tushen Raï wants to reconnect with the adventure novels, from Jules Vernes to Barjavel, which nourished his childhood. Thought out as an ode to the diversity of our cultures, our practices and our beliefs, Drums Circles is a cry in favor of open-mindedness and curiosity. It is an invitation to discovery rather than to conquest. A humble invitation to embark on a journey and to collective trance.

As Halloween hits, so does French producer Walter Mecca on Favorite Recordings, with his new 7 inch boogie anthem. "Gaab Squad" is a tribute to early-80s boogie, plugging vintage synths, slick West Coast vocoder and drum machines... the result is heavy! "Disco Rouge" is a spatial Disco track in the pure French disco tradition of the likes of Jean-Pierre Massiéra, Disco & Co

Thomas Blanchot, 40 years old percussionist and drummer, started his production structure Mato Production in 2001, with which he collaborated and directed for many projects.Composer, music publisher and producer of music for TV, advertising, films and records, he also began a career as reggae producer since 2006, under the name "MATO". Since then he’s released music through various projects concepts, coming out through labels such as Makasound, EDR Records or Big Singles. In the meantime he developed a real trademark: taking over classics French, Hip-Hop, or Pop song, into roots Reggae-Dub new versions.Besides since 2010, Mato’s built a solid reputation thanks to his many remixes of Hip-Hop classics on Stix Records. It is therefore natural to find him back with a new attractive concept on the Favorite Recordings’ sub-label: seasoning the notorious "Homework" by Daft Punk, with his special Reggae-Dub sauce.Once again Mato achieves a brilliant rendition with this “Homework Dub”, making almost dreadlocks grow on the French robots’ heads! Using kick-effects, delays and roaring bass, he reinvents one of the most famous albums of electronic music, as if it was straight-out from Scientist, King Tubby or Mad Professor’ studios in Jamaica.

Les Disques Magnétiques is a new sub-label from Les Disques Bongo Joe presenting their first release with Ediacara, by Ethyos 440.Emerging from Geneva’s underground scene, Ethyos 440 is the meeting of groove band L’éclair and DJ/producer Dj Laxxiste A. This ultimate late-night-infected-dub-live band pairs sequencers and human grooves, analog instruments are played live on riddims, fx’s, and samples manually executed with a dub-mix approach towards the extreme.This this brand new EP will fit perfectly for any party, any DJ set or any late night playlist.