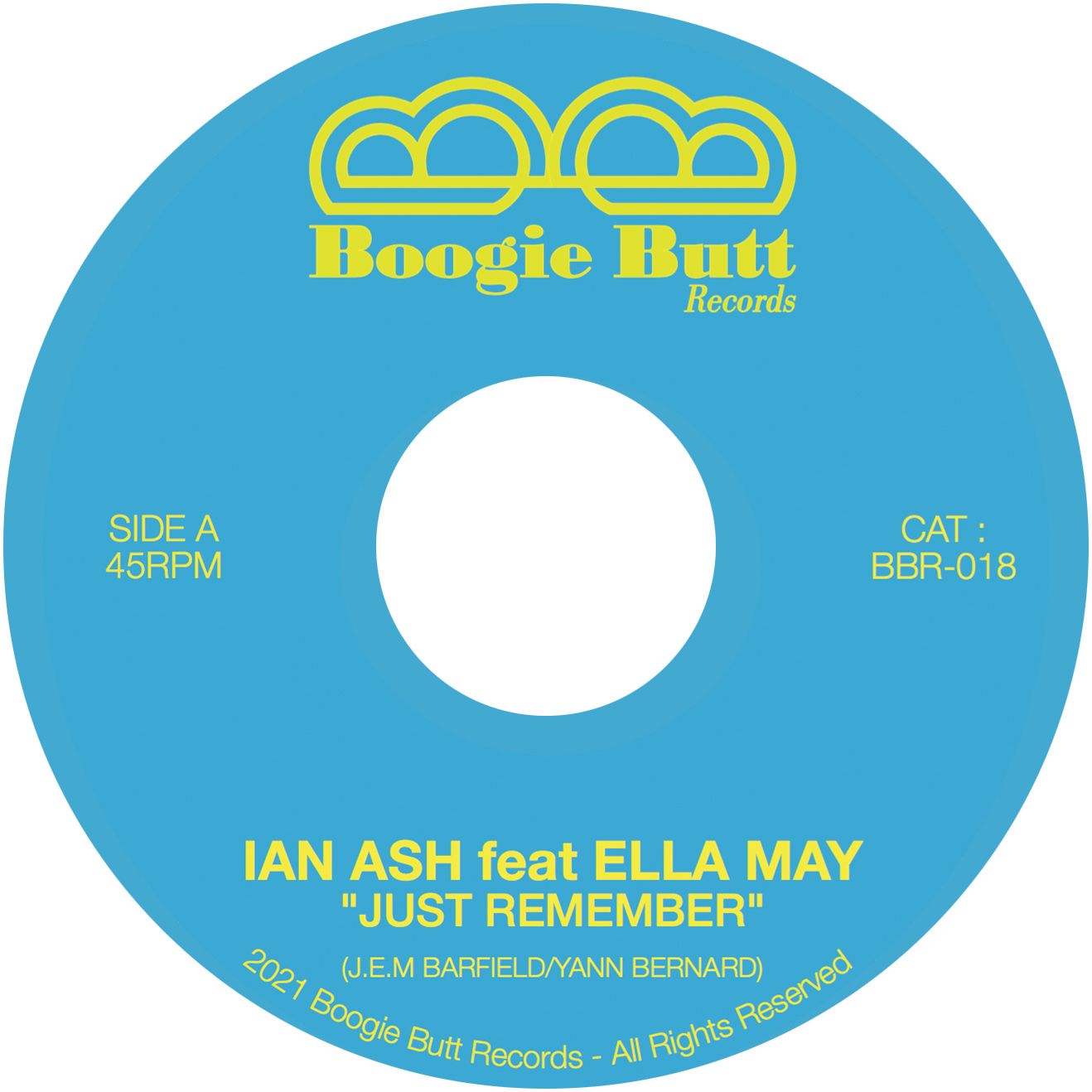 We are pleased to introduce our last discovery Ella May, born and raised in Sweden. In the early 90's, she worked as a backing dancer and singer for both Swedish and international artists such as Jazzy B, Papa Dee among others. Boogie Butt is currently working on our forthcoming projects featuring this gorgeous singer who has a grasp on Funk, Soul & Jazz. Her warm and charming tonality spectrum makes all the tracks really hot.

A side "Just Remember" is the original Funk version produced and arranged by Ian Ash as a tribute to Luther Vandross' mega-hit "Never Too Much".

B Side brings a massive remix by renowned French producer Magoo. He gives the tracks the boogie sound just like in D Train productions. His versions gets straight into Modern Funk, just like the best of Prelude Records.

Ritual Of The Savage…

To celebrate 10 years of this great album INFRACom! is delighted to announce a limited pressing (ltd. editon 500 copies) of Mop Mop ́s third long player. For the first time on vinyl ! Back in 2010 INFRACom! could only release a CD version. For this vinyl release the original studio masters have been transferred to "reel tape" and received a special vinyl mastering for a great analog sound. The original artwork has been transferred to the vinyl version that comes in a gatefold sleeve. After the highly acclaimed "Kiss Of Kali" Mop Mop are back with Ritual Of The Savage, the third studio album, written, arranged and produced by Andrea Benini. Ritual Of The Savage contains twelve tracks of pure hypnotic Jazz, spiritual flavours, exotic Funk and Soul music influenced by Latin and African beats. Collaborations in the album include the amazing UK vocalist Miss Baby Sol (backing vocaling for the likes of Amy Winehouse, Joss Stone, Paloma Faith, Nate James), veteran Jazz crooner Alan Farrington, Down Beat critics poll winner Gianluca Petrella on trombone, the Italian vibraphone Star Pasquale Mirra, the Voodoo sound of Guglielmo Pagnozzi on clarinette and alto sax, percussionist Danilo Mineo and Andrea Benini's co-writer and arranger Alex Trebo on piano and keyboards. Ritual Of The Savage is an album with the philosophy of a soundtrack where the main character is a modern Savage who is searching for a perfect land where music is the only law. He starts his journey after "The Return Of The King", the album's opening track, going to an unknown "Destination" where Jazz meets Funk. Will the Savage be able to reach his goal? Nobody knows. But as the last album's track "Aria" suggests he will land in a space where everything is harmonious. The result is surely mindblowing with a flowing tracklist which sequels as if to tell a story. This album is made for the selective and open mainded music heads and dj's; vintage elements are mixed through a modern way of production and beats are generated by acoustic drums and analog drum machines. As Andrea Benini suggests on "Ritual Of The Savage"'s lyrics : "...Step back, burn all your money, give up to your power silks and chase real pleasure".

An Eye For An Eye…

Favorite Recordings proudly presents this new official album reissue of An Eye For An Eye by Byrne & Barnes: A true WestCoast/AOR masterpiece, produced in legendary music city Muscle Shoals (Alabama) and originally only released on Japanese label Climax.In 1981, Robert Byrne followed up to his 1979 album, Blame It On The Night, by teaming-up with multi-instrumentalist Brendan Barnes to record this rare WestCoast classic. If they never recorded any other music together, both display incredible music career and went on to produce for many famous artists such as Pointer Sisters, Patti Austin, Earth Wind & Fire, Phil Collins, Brian McKnight, or Boyz II Men to name just a few.An Eye For An Eye features amazing and sophisticated songs, and parades all the elements of the AOR style: a jazzy sometimes fusion approach, with modern soul and groove flavors. If it’s almost unknown in Byrne & Barnes’ country of origins and in most part of the world, it’s become hugely popular and sought-after in Japan and for all WestCoast music lovers.After Charles Maurice recently selected the song “Love You Out Of Your Mind” in the AOR Global Sounds Vol.2 compilation, it quickly felt obvious for Favorite Recordings to arrange a proper reissue of the full album, including for the first time the vinyl format.Fully restored and remastered with great attention to sound quality, An Eye For An Eye by Byrne & Barnes is presented in a deluxe vinyl version housed in a tip-on jacket, as CD and in Digital versions.

Humans is the new album from sought after international touring band the London Afrobeat Collective. From Europe to Africa, Glastonbury to Nigeria’s annual ‘Felabration’ festival, LAC deliver party music born of their truly global DNA. The nine-strong collective from England, Congo, Italy, France, Argentina and New Zealand combine diverse influences such as Fela, Parliament Funkadelic and Frank Zappa to create an eclectic sound drawing on funk, jazz, rock, and dub to create something addictive and unique. Their 2015 album Food Chain, received widespread radio support on stations such as BBC 6 Music, Radio X and BBC Radio 2, as well as glowing reviews in The Sunday Times, London Evening Standard, Blues & Soul and Songlines Magazine to name just a few. The new album Humans, (featuring artwork by Ben Hito, renowned for his designs for Parliament / Funkadelic), is a collection of anthemic songs with socially conscious lyrics, set to bold brass lines and hypnotic danceable grooves. In 2015 the London Afrobeat Collective toured Nigeria, appearing several times on national TV and performing in front of ten thousand people at the New Afrika Shrine during ‘Felebration’. They are no less respected in their home town, having collaborated with the likes of Dele Sosimi and supporting legends such as Ebo Taylor, Fred Wesley And The New JB’s, Tony Allen, and Fela’s son, Femi Kuti. LAC are now globally recognised for what they really are: not a tribute, but an ever evolving, international band of expert musicians, continuously inspiring each other as they create distinct, sincere and powerful music. Humans is an accomplished work with international flair and cultural relevance from London to Lagos.

We are back on Boogie Butt with a soul track just like back in the days, this time with a Lord Funk & Samm Culley collaboration. We’re bringing back to your ears this giant artist, who crosses decades of music with its great personality and many groovy songs.Samm Culley is an R&B, soul & funk keyboard player and a dope songwriter. His music career started within the band Tiny Tim & The Hits with Tom Price & Bill Collier. This trio soon left Tiny to form their own group The Diplomatics with Irving Waters as the lead singer. They later on became the legendary Skull Snaps.Over the years, Samm co-produced and/or played with many unforgettable famous artists such as Hot Chocolate, The Fatback Band, George Kerr, Patrick Adams, Vaughan Mason, Reggie Griffin, De-De, Van Mc Coy, Lloyd Price & even later in Hip Hop music with Marley Marl or Freddie Foxxx.“Let It Go” brings you back in 1970 with a great killer dance floor track for Bboys and soul lovers: the dru break is hot and on the same time, the guitar hook and bassline make you feel James Brown on the scene. Close your eyes and easily imagine John Shaft dancing on “Soul Makossa”. The B side is the instrumental reworked by our well-known Lord Funk, with Samm on bass. Enjoy & play loud!

New Jersey born Clyde Kingrap (aka The Real Fake MC) is probably the freakiest MC on earth. His Flow is definitely influenced by old-school Hip-Hop masters, but The Real Fake MC declares that his major influence remain in P-Funk, Gogo and early Punk Rock.For more than 15 years he’s been grabbing mics and spreading funky vibes on stage & in collabs all around the world. His two 12″ out on Favorite Recordings, Live & Survive & Hunt Ya Sunshine, and his 1st LP Rock It Up were produced by French producer Patchworks aka Mr President.These two musicians have been dropping some tracks together for more than a decade, with always the same target: educate their love for Hip-Hop with jokin lyrics and Funk inspired beats played live with instruments.They’re back with a brand new LP, Future Funk Survivors out on Boogie Butt Records.