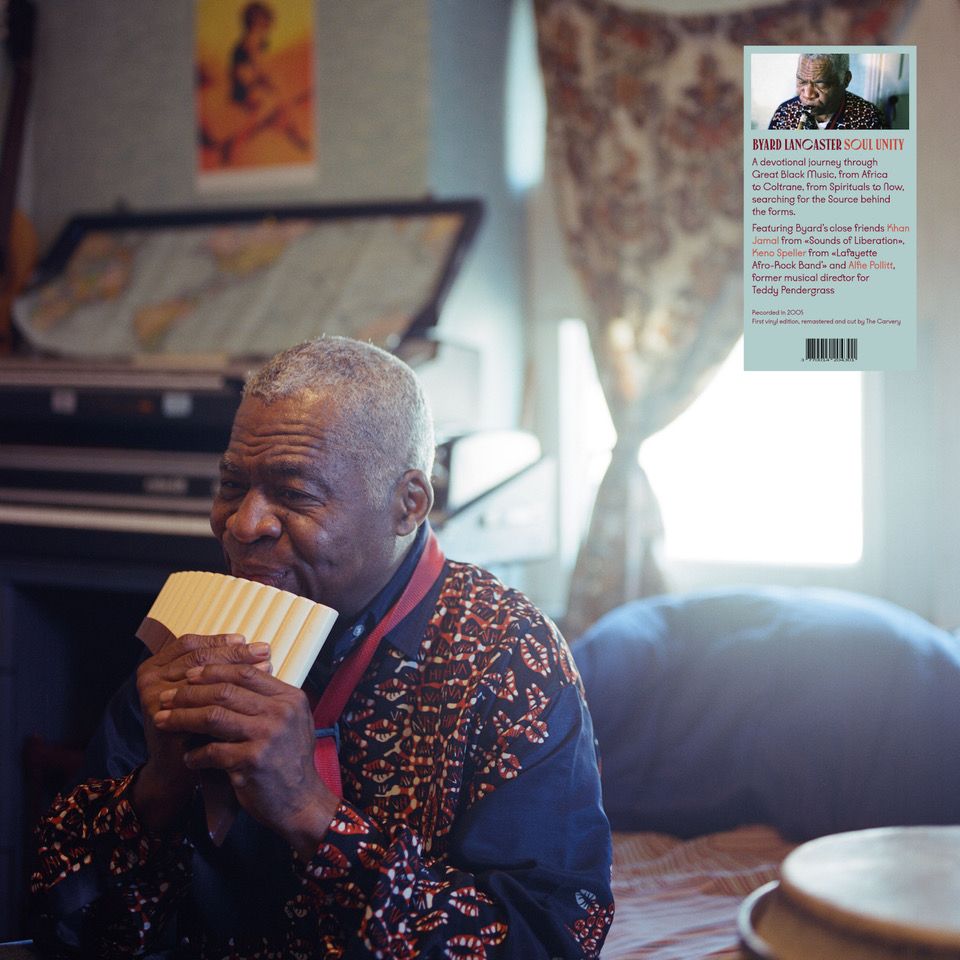 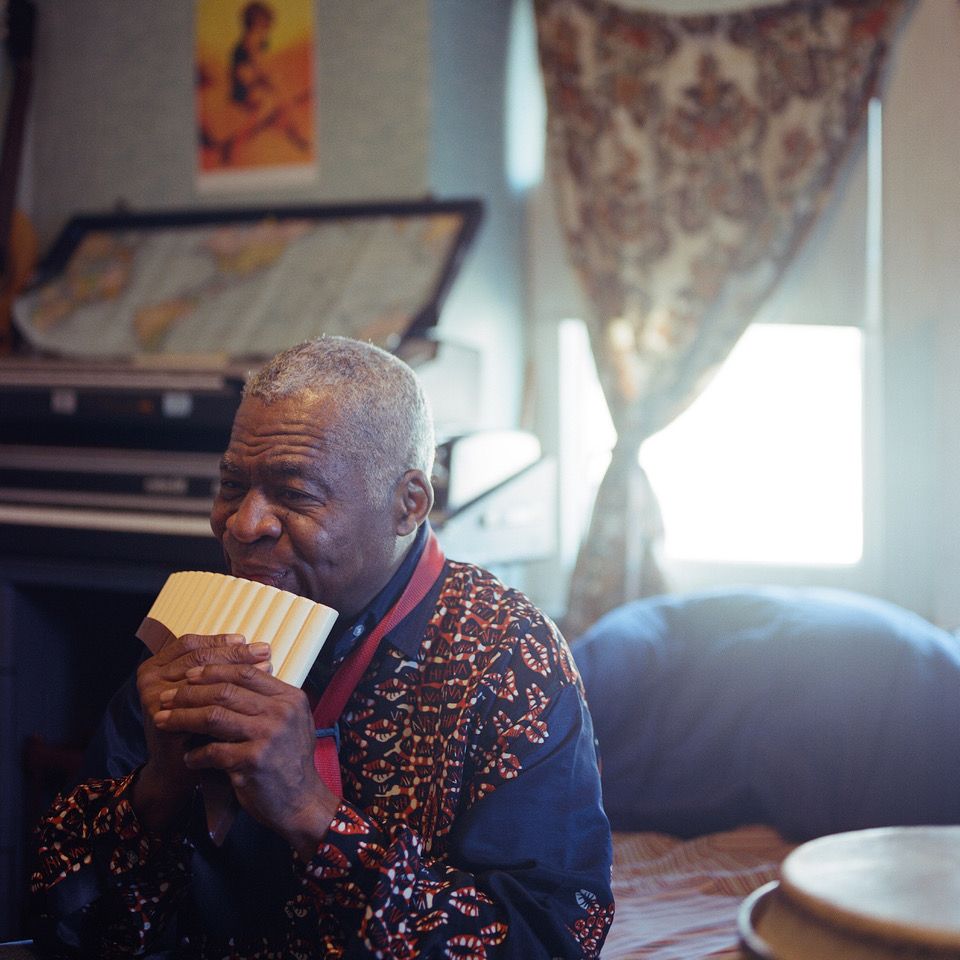 The saxophonist and flutist from Philadelphia has released cult albums under his own name from the late 60's until his death in 2012 and features on recordings from Larry Young, Doug Hammond, Sunny Murray among other major jazz musicians. He also co-founded the mythical band Sounds of Liberation with his friends Khan Jamal and Monnette Sudler.

Soul Unity is a devotional journey through Great Black Music, from Africa to Coltrane, from Spirituals to Now, searching for the Source behind the forms. It features Byard Lancaster's close friends Khan Jamal from ‘Sounds of Liberation’, Keno Speller from ‘Lafayette Afro-Rock Band’, Alfie Pollitt, former musical director for Teddy Pendergrass and Men On A Mission, a Gospel quartet.

Produced by Antoine Rajon, now A&R of Komos, it was recorded in one take on a sunny Saturday afternoon of 2005 in Philadelphia at Morning Star Studios. First vinyl edition, remastered and cut by Frank Merritt at The Carvery.

Rhythm In The Dark

The Inspiration That I Feel

The Creator Has a Masterplan

Following the recent success of French Disco Boogie Sounds, DJ and producer Charles Maurice is back on Favorite Recordings, this time engaging a musical World tour, in the search of hidden productions with a touch of AOR style. The result is AOR Global Sounds, a new compilation made of 8 forgotten and rare tracks produced between 1977 and 1982 in all parts of the globe. At the end of the 70s, many artists over the world were deeply influenced by AOR’s famous stars such as Steely Dan and his classic Aja LP, looking to reach the same attention to sound production and details, and this specific Westcoast style mixing together Pop-Rock standards, with Soul (sometime Disco) and Jazz influences.From Erik Tagg in Netherlands, and Ulla in Poland, to Diane Tell in Quebec, and Nohelani Cypriano in Hawaï, Charles Maurice found a real link between these 8 great songs and artists, in their music clearly infused with this special AOR touch, in a Soulful and Disco way.This perfect soundtrack for the summer has been fully remastered from original versions, and is presented by Favorite Recordings in a deluxe vinyl version, housed in a tip-on jacket. A must have for rare-groove music collectors and many more…

2 years after the release of his first solo album, Favorite Recordings proudly presents SOLAR, second album by acclaimed Brazilian composer Lucas Arruda, and hundredth releases of the label!!Lucas Arruda’s born in 1983 near Rio de Janeiro. After studying electric guitar, his passion quickly turned into Rhodes and keyboards, expanding his musical range of skills. At the same time he started his own home-studio and a real musical career in Brazil, gaining great local support from people like Ed Motta, William Magalhães (Banda Black Rio), Robert Lamm (Chicago) or Hyldon. In 2012, Fabricio Di Monaco (from Modo Solar) introduced Lucas’ music to Favorite Recordings’ head honcho, Pascal Rioux, and one year after, Lucas Arruda presented his first solo album titled Sambadi, receiving great supports from many international DJs and media, who all acclaimed his natural skills for composition and arrangement.Following this successful first effort, here comes SOLAR, new and second solo album by Lucas Arruda, filled with his fusion style, mixing influences and elements from his Latin musical background, with his genuine admiration for Jazz, Soul and Funk music ;On “Melt the Night” for example, Lucas asked legendary producer Leon Ware for his help, reminding his collaborations in the 80s with Marcos Valle, when they perfectly merged together the sophisticated Boogie and AOR touch from California, with the blazing sense of rhythm from Brazil. For the occasion, they also recorded a blowing version of Marvin & Diana’s classic ballad “Stop! Look, Listen (To Your Heart)“ with the help of Guida de Palma’s (Jazzinho) beautiful voice.For “Uma Onda”, he invites Alex Malheiros, bassist of the famous Jazz band Azymuth, for a splendid tribute to their specific fusion sound and influence on the Brazilian music scene. Finally the song “Agua”, co-written with his longtime friend Fabricio Di Monaco, is a beautiful ballad which illustrates perfectly Lucas’ passion for Soul music stars such as Stevie Wonder or Curtis Mayfield.On top of these great collaborations and a few more surprises, SOLAR also differs from its predecessor by a lot more elaborated production process, offering an authentic and warm sound. Mostly recorded at Sala A Studio in Brazil, many drums parts were also taken at the fully analog Ambience Studios in Finland. The mix was also done in Finland on a Neve 8108 console from 1978, using only analogic technology and a Studer master tape to record the final pre-master.The result is a timeless album, which should definitely established Lucas Arruda as one of the finest and most talented Brazilian musicians these days.

Favorite Recordings presents Jazz Traficantes by LE DEAL, a new musical adventure from the finest French jazzmen with Florian Pellissier (Piano & Fender Rhodes - Camaraõ Orkestra, Cotonete, Aldorande, Setenta), Yoann Loustalot (Flugelhorn – Bruit Chic, Old & New Songs, Aerophone, Lucky Dog), Théo Girard (Upright Bass – Pensée Rotatives, Discobole) and Malick Koly (Drums - The Wallace Roney Quintet). Needless to say, they’re used to play all over the globe and quite often to New York. During one of these trips to the Big Apple, they discovered that the legendary Van Gelder studio (where most of Blue Note, Verve and CTI albums were recorded) was still active and opened so they decided to book a few days session.Here is the story told by Florian Pellissier: “The tracks had been written the night before. We were going to run through them and then record. A simple plan. Van Gelder had passed a while back, but he left the keys and secret codes with his faithful assistant Maureen before heading off to create the right sound up in heaven. Nothing had changed in the atmosphere or configuration, not even the way the mics were placed. The studio and its wooden beams still exuded New York’s sixties jazz, dimly lit streets and clubs where anything might happen past midnight. Maureen knew just how to capture the ambiance of the sessions and bottle the energy without spilling a drop, taking infinite care to collect each cymbal tone, drum roll and trumpet phrase, without losing a single vibrating bass string or the slightest keyboard pause.”Indeed, the four contrabandists succeeded to deliver an outstanding album, filled with themes that’ll get stuck in your head, just like in the 19 minutes long performance “Mexican Junkanoo Suite” and its three parts. But more than just beautiful melodies, LE DEAL truly managed to bring a sense of drama to their compositions, going into the deepest emotions through gutted arrangements, improvising with great attention to the articulation of their ideas. From the beginning to the end, musicians and engineers did their best to emulate the proper vintage sound. Jazz Traficantes could prove once and for all that French Jazz can indeed cross the borders.