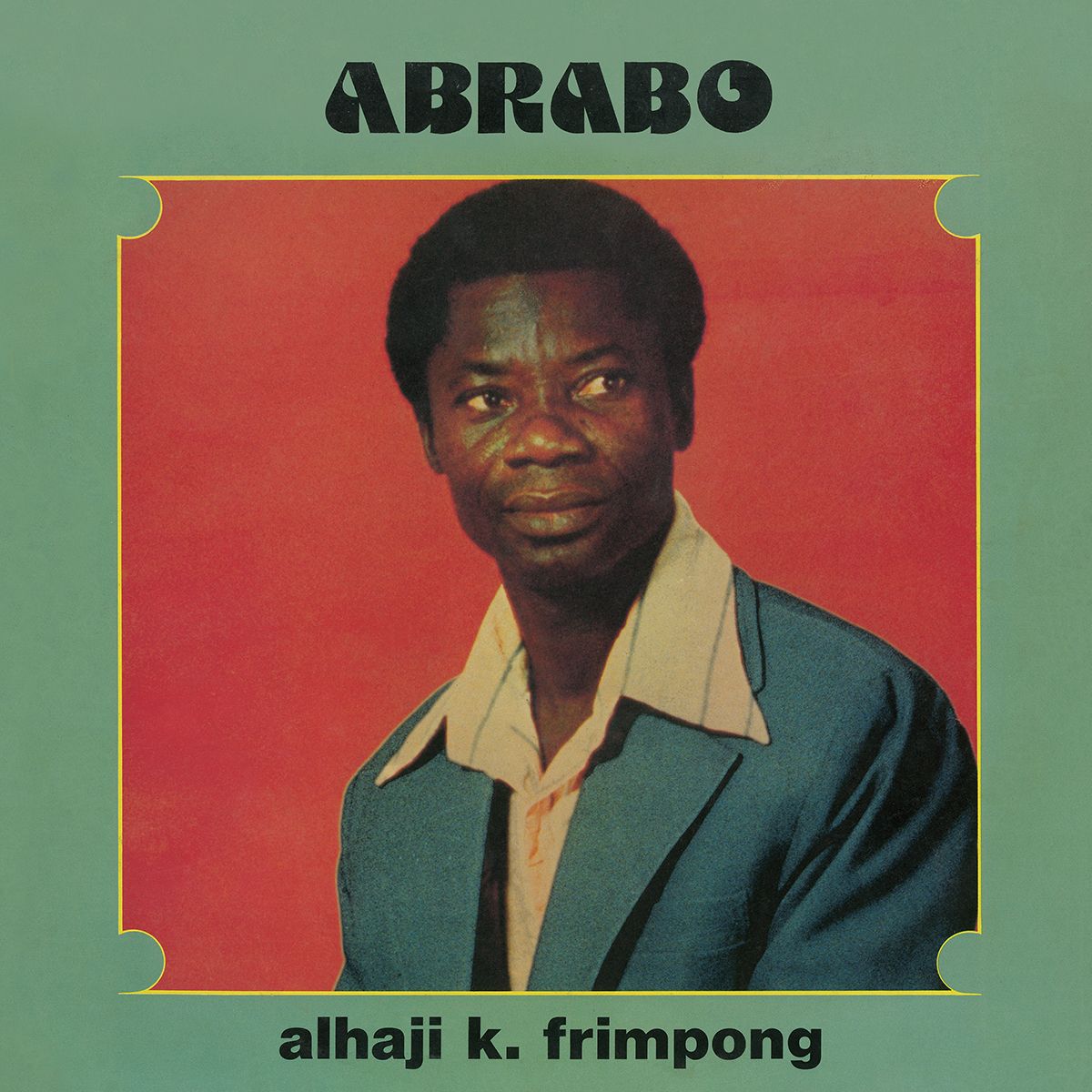 A classic and essential Hi-Life & Afro Funk album from one of the greatest Ghanaian singers and composers reissued for the first time!

The legendary Alhaji Kwabena Frimpong's fantastic rare album was recorded in 1984 in Germany and originally produced and distributed from Hamburg. K . Frimpong was born on July 22nd 1939 at Ofoase in the Ashanti - Akim district, died Oct 18th 2005 in Kumasi (Ghana).

He entered right into music after elementary school by joining "Star de Republic" and later "Oko's band" after which he left for K. Gyasy's band where he worked for more than 6 years. As a prolific songwriter and singer, here's the reissue of his amazing album, a modern fusion of Hi-life and Soul . The excellent background is given by the famous Cubanos Fiesta with members of Vis-A-Vis band such as the famous Sammy Cropper on guitar or Slim Manu on bass.

Originally produced by Atakora Mensah in Hamburg, this four songs recording is a blend of danceable and spiritual Soul and straight Hi-life. A must-have vinyl of percussive Afro Funk for all the music connoisseurs, Abrabo is a true masterpiece, so hard to find and reaching crazy skills for a decent copy affordable.

Remastered by Frank Merritt at The Carvery. Pressed on Replika format. Fully licensed by the Alhaji Kwame Frimpong Family.

Eight years deep into their existence, Paris-based Mawimbi are proud to present their debut album Bubbling. Through their own label and events, the collective have championed up and coming artists who look to fuse african music with the modern dancefloor. They’ve released records from Lya, Onipa, Afriquoi and James Stewart and brought established artists and fellow travellers to such as Auntie Flo, Africaine 808, Awesome Tapes From Africa and Esa to Paris. Now it’s time for the collective to unveil their identity as producers and musicians in their own right.“Bubbling” refers to the many ideas, encounters and projects that the collective have come into contact with over the past years. Through their events and their work as label curators and remixers (for artists such as Oumou Sangaré, Blick Bassy, Cerrone, Onipa), Mawimbi have become known as ambassadors for “afro-electro” - whatever that might mean - and their debut album buzzes with the contagious energy of the music they love. If you ask Mawimbi, Afro-electro is about global and local inspiration, from both sides of the Black Atlantic. It’s about paying tribute to the forefathers and the brothers and sisters in arms across the world. Afrobeat, highlife, South African bubblegum pop, Malian music, maloya… Bubbling seeks to connect geographically separate but spiritually similar club sounds.Hence “El Caribe” (feat. Ghetto Kumbé) is half cumbia, half Carribean dancehall, while “Ngana” (feat. Fatim Kouyaté) has some elements of dub music and “Kakraa” (feat. K.O.G) nods to disco‐infused Ghanaian productions from the 70s. Despite the influences, this is a record designed for home-listening, a nod to our present circumstances, but also a deliberate step away from dancefloor. A moment of patience and reflection as much as joy and celebration.`Above all, Bubbling is a personal record, about unexpected cross-pollinations and the collective’s individual explorations of these musical territories. Mawimbi's own history is one of coincidences and chance encounters, and so is “Bubbling”. All the collaborations were born out of the connections made over the last 8 years. A WhatsApp chat with Zambian artist Mufrika, a spontaneous studio jam with Ghetto Kumbé in a Parisian Basement: these are captured moments of real, vital connections made.Like Mawimbi itself, Bubbling is a collage of relationships and shared experiences, shaped by nascent friendships and musical encounters. It’s a truly DIY document in that sense, the sound of the last eight years of the Mawimbi adventure: free spirited, passionate, warm and generous.

** Not available for Italy & UK **Unconscious Collective is the first album by PS5, the new ensemble led by Pietro Santangelo (Nu Guinea, Slivovitz, Fitness Forever) - and it will be out for Hyperjazz Records on 21st May 2021. It’s a further step in the label’s path in trying to connect the musical tradition of South Italy, the love for African-American music, and new ways of expression. ‘Unconscious Collective’ is a musical experiment where layered memories and hidden feelings resonate as if they arise directly from the most recondite part of the unconscious, suspending the stream of consciousness. With the aim to create a state of trance and override the human reason, this is an imaginary round trip across the Mediterranean Sea and the Atlantic Ocean, ideally connecting Naples with Northern and Sub-Saharan Africa and Latin America. The arrangements wrote by Santangelo are based on great freedom of improvisation: while the melodic textures of the two saxophones didn’t give any clear references, the other musicians followed the rhythmic pulse and its unpredictable ways. The music moves naturally along an imaginary line highlighting the ancestral connection between Jamaica and Ethiopia or between Nigeria and Cuba. In the background, Naples is a synthesis of all the sonic ingredients, mixed and cooked in its own mystical and spicy belly.Besides Santangelo himself on the tenor and soprano saxophones, the collective is made up of: Paolo Bianconcini, a brilliant Neapolitan percussionist with a very deep Afro-Cuban background; Giuseppe Giroffi, young and talented alto, and baritone saxophonist; the bassist Vincenzo Lamagna and the drummer Salvatore Rainone, both loyal members of the former Santangelo’s trio.Recorded live at the Auditorium Novecento in Naples, the legendary studio of Phonotype Records, Unconscious Collective is mixed in analog format by Fabrizio Piccolo and mastered by Davide Barbarulo at his 20Hz20KHz Studio.

Second release from the promotional edits label La Bestiole Records. Loony saxophone, frenetic TR beats and love advice, completed with some hot locked grooves: everything you need to make people dance together and love each other.

Two Tales For The Mind Vol. 1…

“Just as Picasso said “I do not search, I find”, Tribeqa has this grace that cannot be commanded: the grace of finding. Their music is a gift. It is fresh and spontaneous, like all musical approaches based on emotional and intellectual honesty. I have been following this band for nearly 3 years. The encounter was extremely rewarding for me. I am calling upon all audiences to listen to their music and receive those vitamins of which they have the secret” – Magic Malik