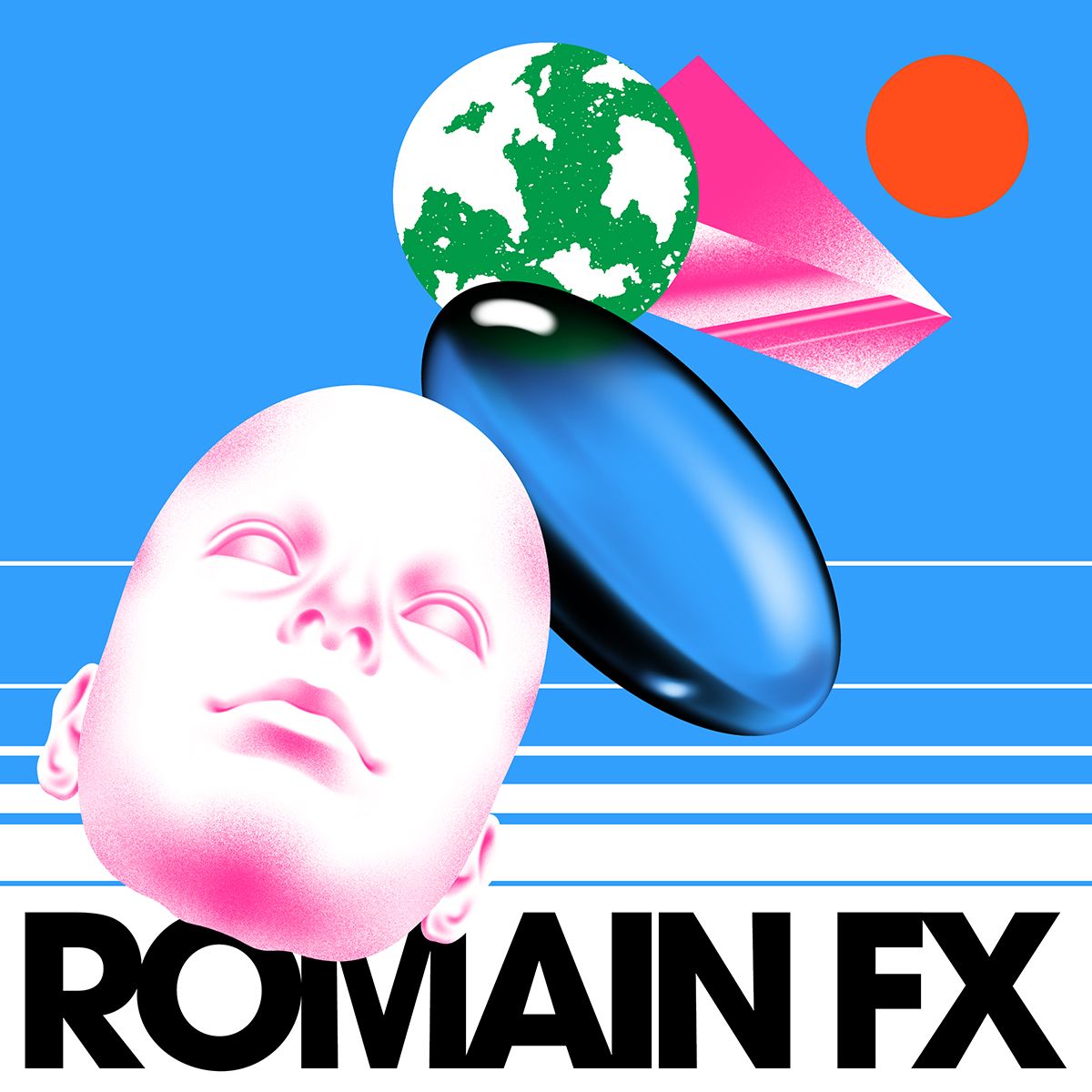 After having made his mark on renowned labels such as Exploited, Eskimo Recordings, Novaj 新し, LAGASTA, Fantastic Voyage, Mamie's Records or Hard Fist Records, the ultra-productive artist is about to release Le Sucre d'Adam a new EP of 4 tracks and 2 remixes with the Parisian label Cracki Records.

Mixing Italian dream house, jazz, and Italo Disco, Romain FX wanted to create with this EP a timeless record and convey a message of hope for a better world.

The first track "Zeste d'Orange" is full of joyful emotions, with a feeling of unity and sharing, strongly influenced by 80-90's pop songs like "Rise Up" by The Parachute Club, and "Send Me On My Way" by Rusted Roots.

With its melancholic keyboards, "Le Sucre d'Adam" is a pure concentrate of Italo Dream House, and it's not a coincidence that Romain FX entrusted the remix of the track to the German Lauer, specialist of the genre.

"Italominati" with its powerful bass, draws him in the field of the fairy, influenced by artists like Todd Terje or Skatebård. It is the Korean producer Shubostar, new figure of the dark disco scene, who took care of the remix for a very effective cosmic version !

Last track of the EP, "Crave Cave Rave" with its Rave UK and progressive house accents was imagined as a long DJ Set closing. Intense and heavy at the beginning, the track ends with a feeling of extreme release, closing the EP in the most beautiful way.

**** DIZONORD DEADSTOCK ****Dizonord is proud to bring you the last vinyl release of Databass Records’ veteran AJ McGhee previously released in the US back in 2006 ! AJ McGhee is renowned for his productions for Detroit’s hip hop / gangsta rap band Da-Omen and his label Thorn Entertainment is still one of the best kept secrets for all Ghettotech and Bass Music lovers ! Indeed all his electro / booty productions have this genuine ghetto / rap approach to it !

Libreville Records presents Totāl Cuevas, a seminal compilation album of legendary DJ Guy Cuevas's own music.Guy Cuevas is a French-Cuban writer, musician, and DJ, pioneer of the art of modern DJing. A key figure on the Paris night scene, Guy Cuevas gained a cult status as the resident DJ of the mythical nightclub Le Palace, gathering thousands of people every night under his booth, shepherding them with his music towards euphoria. He also collaborated with a great number of Fashion brands, such as Yves Saint Laurent, Kenzo, Dior, Hermès and many more.In the early 80s, Guy Cuevas released a handful of records, channeling his hedonism and natural grandeur into his sound, creating a unique music of his own.Totāl Cuevas brings together music from his three singles Ebony Game (1981), Obsession (1982), and Gallo Negro (1984), and includes previously unreleased alternate mixes. Guy Cuevas’s most iconic output, "Obsession - The Nassau Mix" (mixed by François K) gets a fresh new reboot with "Obsession - The Paris Version".Remastered from the master tapes.

Comet presents the first release from its new Disco Highlife series, featuring remastered originals by Ghanaian legends Ebo Taylor & Pat Thomas and disco reedits by LeonxLeon and Leo Nanjo.Founder of Comet Records, Eric Trosset, started working with those great heroes of West African music, back in 2010. Taking on the role of manager/publisher, Comet teamed up with Strut Records and musician/producer Ben Abarbanel Wolff to revive Ebo Taylor‘s international career with a string of album releases: Love & Death, Appia Kwa Bridge and Life Stories. In 2014, he collaborated with Pat Thomas & The Kwashibu Area Band on a new album, gathering together the old ‘pals’ (Ebo Taylor, Pat Thomas, Tony Allen) in producer Kwame Yeboah’s studio in Accra.It is with great pleasure that Comet launches this new series. Let's make this beautiful and timeless music the soundtrack to an unforgettable summer!On side A, comes “Enye Woa” by Pat Thomas, originally released in 1988 on Nakase Records and taken from the album Me Do Wiase. It’s killer disco cut, and as innovative a piece of highlife as it was 30 years ago. Paris-based producer LeonxLeon has been cooking up songs in his Parisian home-studio since 2013. He did a remarkable remix of Cerrone's "Funk Makossa" and more recently released his new Rokanbo EP on Cracki Records. His remix of “Enye Woa” is a classy modern disco cut with funky bass and spacey synths.On side B is “Atwer Abroba” by Ebo Taylor, a stand out up-tempo track from the album Twer Nyame, originally released in 1978 on Philips West African Records. Tokyo-based multi-instrumentalist/producer/arranger Leo Nanjo formed the first Japanese afrobeat group, Kingdom Afrorocks. Since the band broke up in 2014, Leo has been producing and arranging music with various collaborations, such as DJ Muro, Pushim and Misia. This is a trippy afro-futurist, broken-beat reedit with highlife grooves flying to deep space.