Various
Vacation From My Mind 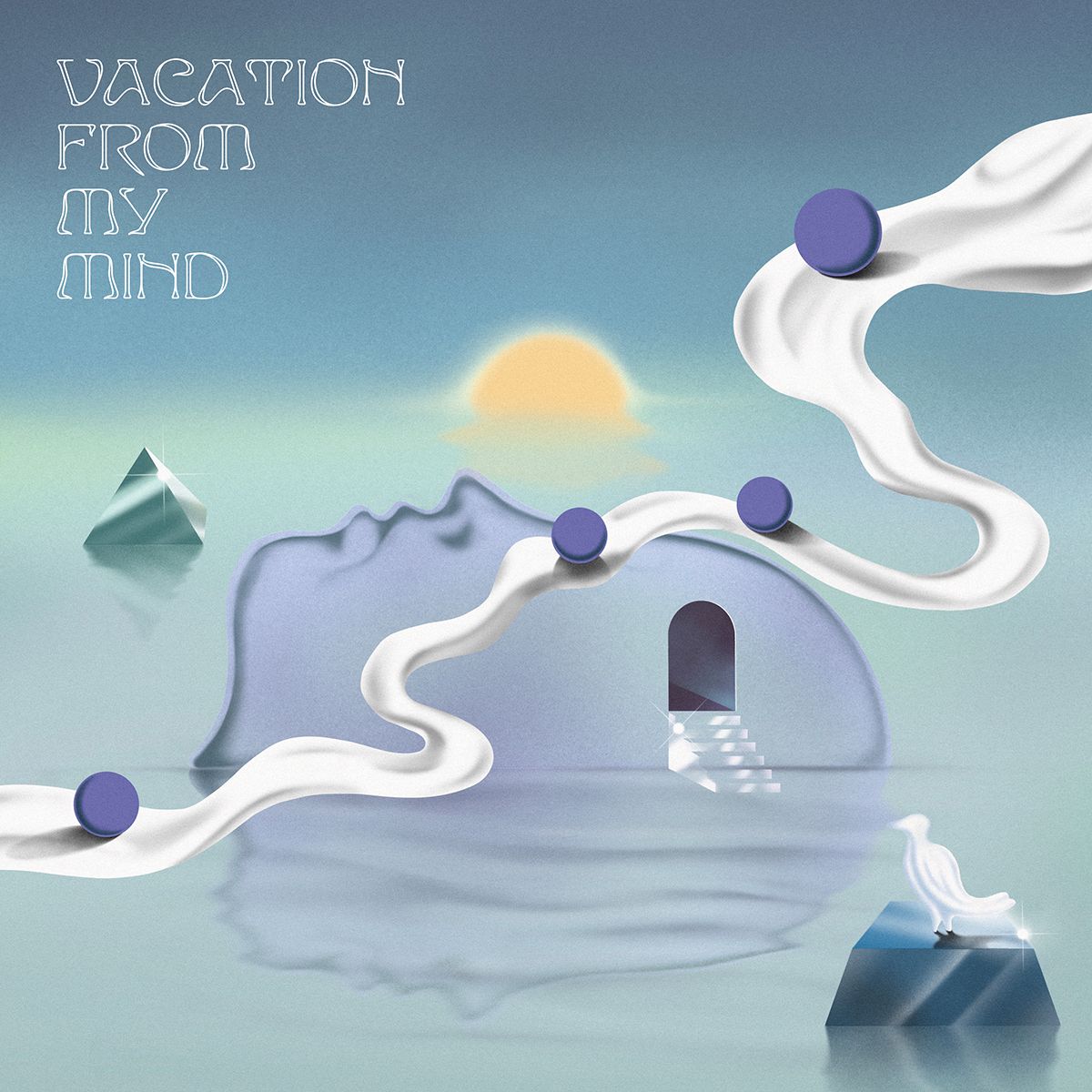 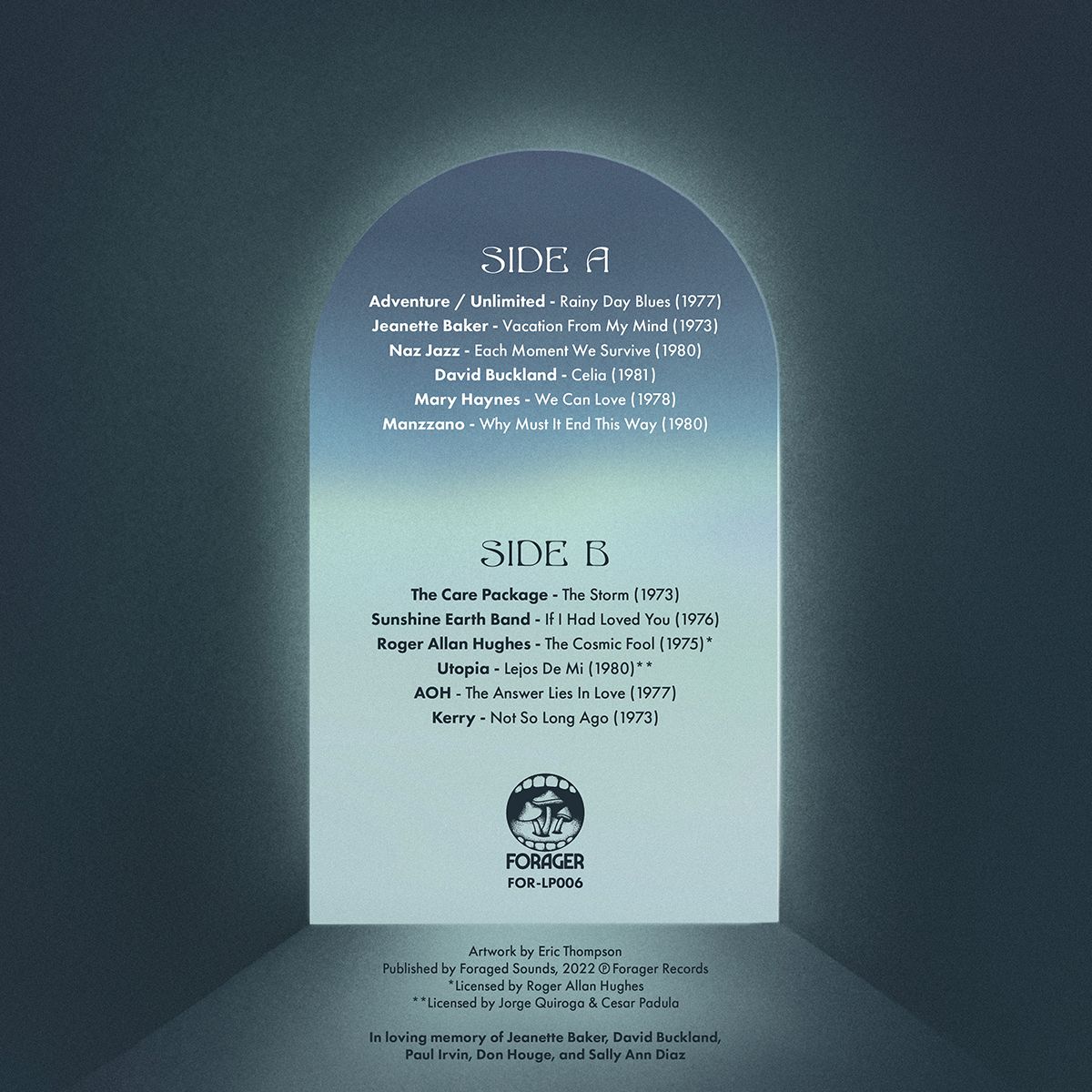 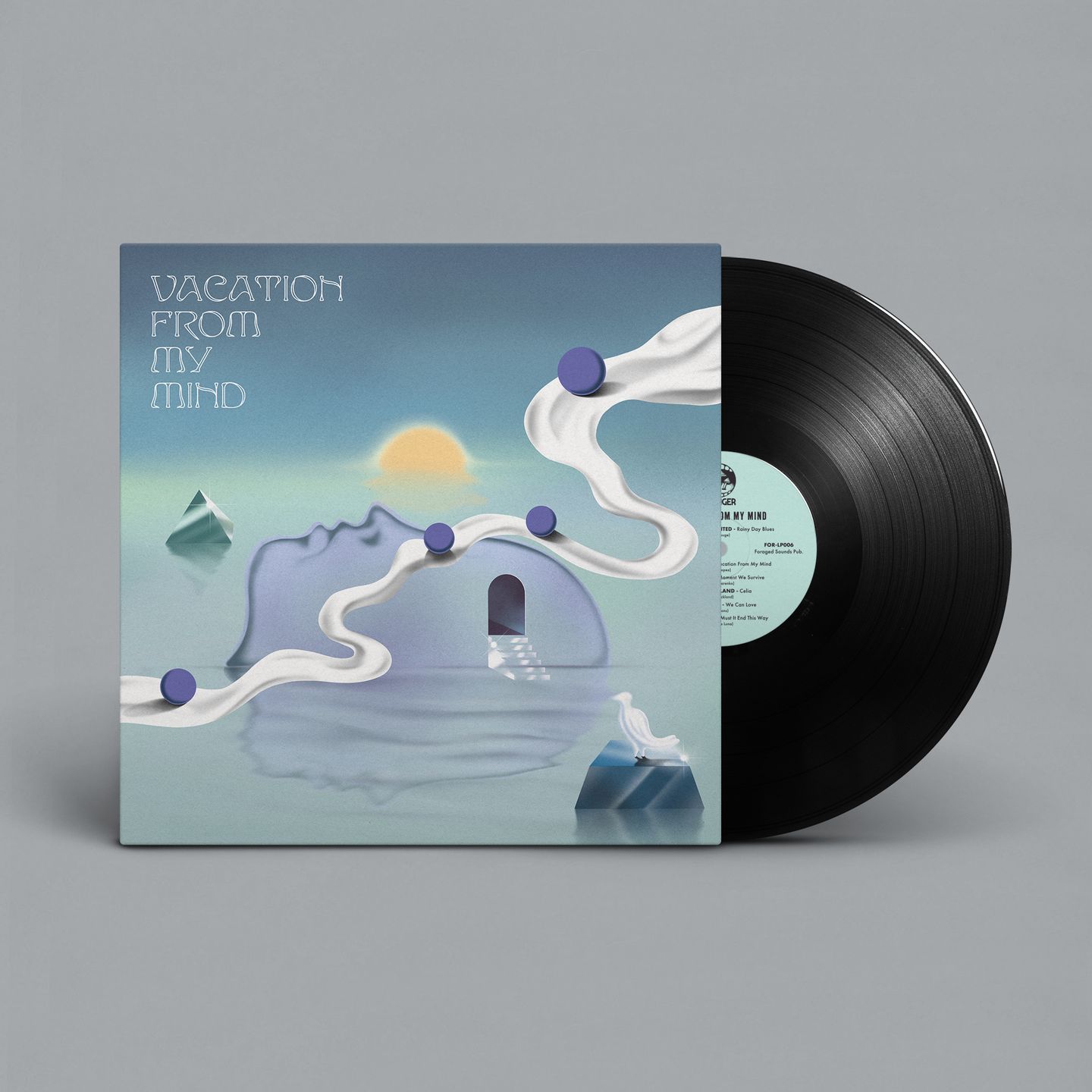 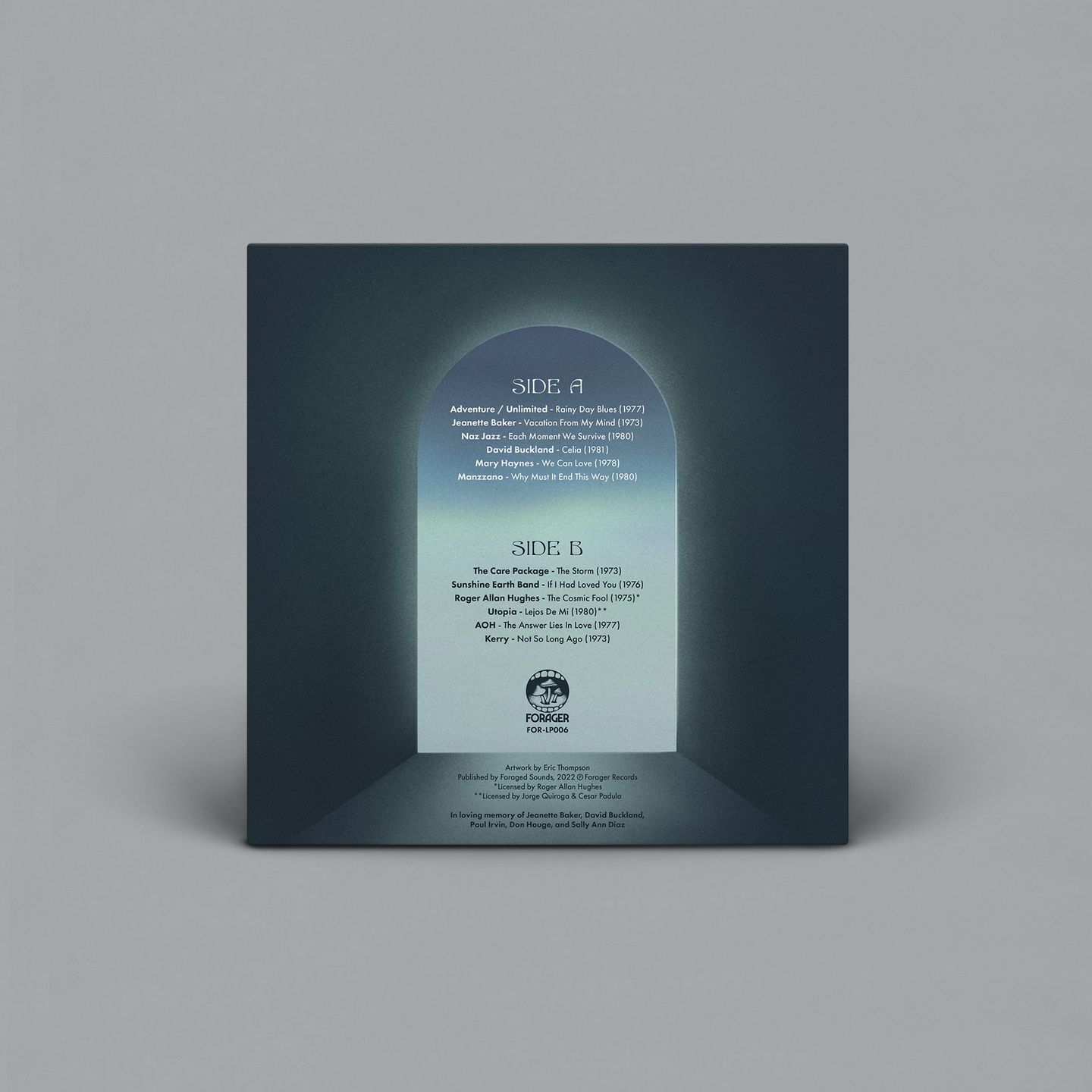 A gift to the overthinkers and overworked. Those who are over-concerned and always preoccupied. This is an invitation to hang up the bootstraps, take a load off, and visit a place in the mind where the sun is shining, the breeze is soft and the waves lap softly at your feet. Vacation From My Mind is a sonic realignment of melancholic soul, breezy soft rock, & mellow jazz-funk.

This album is a thoughtfully curated collection of 12 rare and obscure tracks from 1973 to 1981. From Jeanette Baker’s hypnotic 70’s soul title track “Vacation From My Mind” to the Latin rhythms of David Buckland’s jazz-funk “Celia”, this compilation was lovingly crafted to ease the stresses and worries of modern life. The Care Package’s song “The Storm” is a larger-than-life production of dreamy harmonies not often found on privately released 45s. Utopia’s “Lejos De Mi” is a slow-burning slice of Bolivian psych that will have you searching for similar sounds. Whatever your preference, we hope that this album will give you a vacation from your mind.

Jeanette Baker - Vacation From My Mind

Naz Jazz - Each Moment We Survive

Mary Haynes - We Can Love

Manzanno - Why Must It End This Way

The Care Package - The Storm

Sunshine Earth Band - If I Had Loved You

AOH - The Answer Lies In Love

Kerry - Not So Long Ago

Bruno "Patchworks" Hovart is clearly a name to remember when it comes to modern groove music! Bassist and guitarist in various band, he started production in the mid- 90s and continues today to combine modern technology with the raw and genuine spirit of the golden age of Disco, Funk, Soul, or Jazz.Following the success of his many projects such as Uptown Funk Empire, The Dynamics, Metropolitan Jazz Affair, or more recently Patchworks Galactic Project, he proved album after album, a true gift of musical ubiquity, renewing in all genres and always anxious to borrow unexpected ways.Back on Favorite Recordings label for this new solo album as Mr President, he finally provides us with a sequel to Number One (2011), first album with whom he was welcomed and praised by international media and tastemaker (NOVA, Okayplayer, Gilles Peterson, JAZZ FM, Laurent Garnier,...).Faithful to his love for Disco and Funk from the 70s and 80s, Hips Shaking however differs from its predecessor by digging more into Pop music, but also by a more elaborate production, with real horn and strings sections invited around Patchworks. However still key to everything and polyvalent, he not only composes the whole album and plays a good part of the instruments, but this time also devotes to singing!From Roy Ayers to MFSB , through Vince Montana and Patrick Adams, or Michael McDonald and Ned Doheny, this Hips Shaking proudly look at the sound and production of the pioneer heroes, while infusing with Disco, Pop, Electronic and Fusion influences, which have made the Patchworks’ touch: an authentic sound with a modern approach to music!

We are very proud to presents this official and first ever reissue of The First Coming, by Twylyte ’81, an extremely rare and underrated Soul-Jazz album produced and released in 1981.Twylyte ’81 was a 3 pieces band composed of Frank Jones Jr., Alfred Brown Jr. and John Belzaguy, who, except for John, have never recorded anything else than this incredible album. The First Coming is primarily standing out by a superb composition, mixing touch of Soul, Jazz, and Disco together. It secondly shines thanks to the amazing deep and spiritual voice of the band leader, Frank Jones Jr., whose vocals style can sometime remind of John Lucien. Even more impressive is the fact that these 3 fellas were all less or close to 18 years old when composing and recording this beauty. As did others brilliant hidden projects such as Ted Coleman Band, or Minority Band, it was also useful for Twylyte ’81 to receive the support of JSR Records, a kind of non-profit label dedicated to help young bands and artists in recording and producing their own records.Here are a few words from Al Brown Jr. about this release: “After 38 years, I still have the euphoric feeling while listening to this album. I would say that this was one of my greatest achievements. I want to say "Thank you" Pascal Rioux and associates for sharing the group's vision with the rest of the world. I pray the listeners will feel a portion of what we tried to convey through these songs. When I first began this project, I thought it was just killing time. Being 17 years old at the time, I didn't see the music we worked on being recorded. We (Frank and I) were in a basement practicing each song. Who knew that this music would be recorded let alone picked up 38 years later? I still remember every beat, drum roll, every stop/start; everything. Wow, the nostalgia of it all. I wish this album much successful and I hope in the future I can perform this album live.”

** Available exclusively at The Pusher **Originally released in 1983, this 12’’ from French-Haitian saxophone player Ulysse became cult – and extremely rare – within the French boogie niche. Both tracks wonderfully succeed in mixing political statements with dance-floor delights.Boogie-pop track “Naïma” seems to be a love song at first, but actually says the impossible resilience of a woman who has grown up in war.The heavy digital reggae song “Tiers Monde” warns us about the abandonment of Third World children.This maxi single, where each track is instantly followed by its instrumental version for greater DJ use, is an authentic snapshot of the Paris mixed club scene of the 1980s. Really hard to find for a very long time, it’s a great pleasure for Stima Records to make this music available again, in order to reach a well deserved new audience nearly 40 years later!

They say that good things come in threes… it must be true and Favorite Recordings also proudly presents the third edition of its acclaimed French Disco Boogie Sounds compilation series.Like on prior volumes, the complete tracklist is selected by label head honcho, Charles Maurice (aka Pascal Rioux), who’s unearthed 13 more forgotten and hidden tracks, all produced whether in France, in French, or by French artists between 1977 and 1987.With most of these titles now very hard to find in their original edition and unknown by many, this compilation should be a must have for any Disco-Boogie-Funk music lover and collector.Fully remastered from originals at The Carvery Cut (UK), French Disco Boogie Sounds Vol.3 (1977-1987, selected by Charles Maurice) is presented by Favorite Recordings in a gatefold vinyl double LP and as CD.