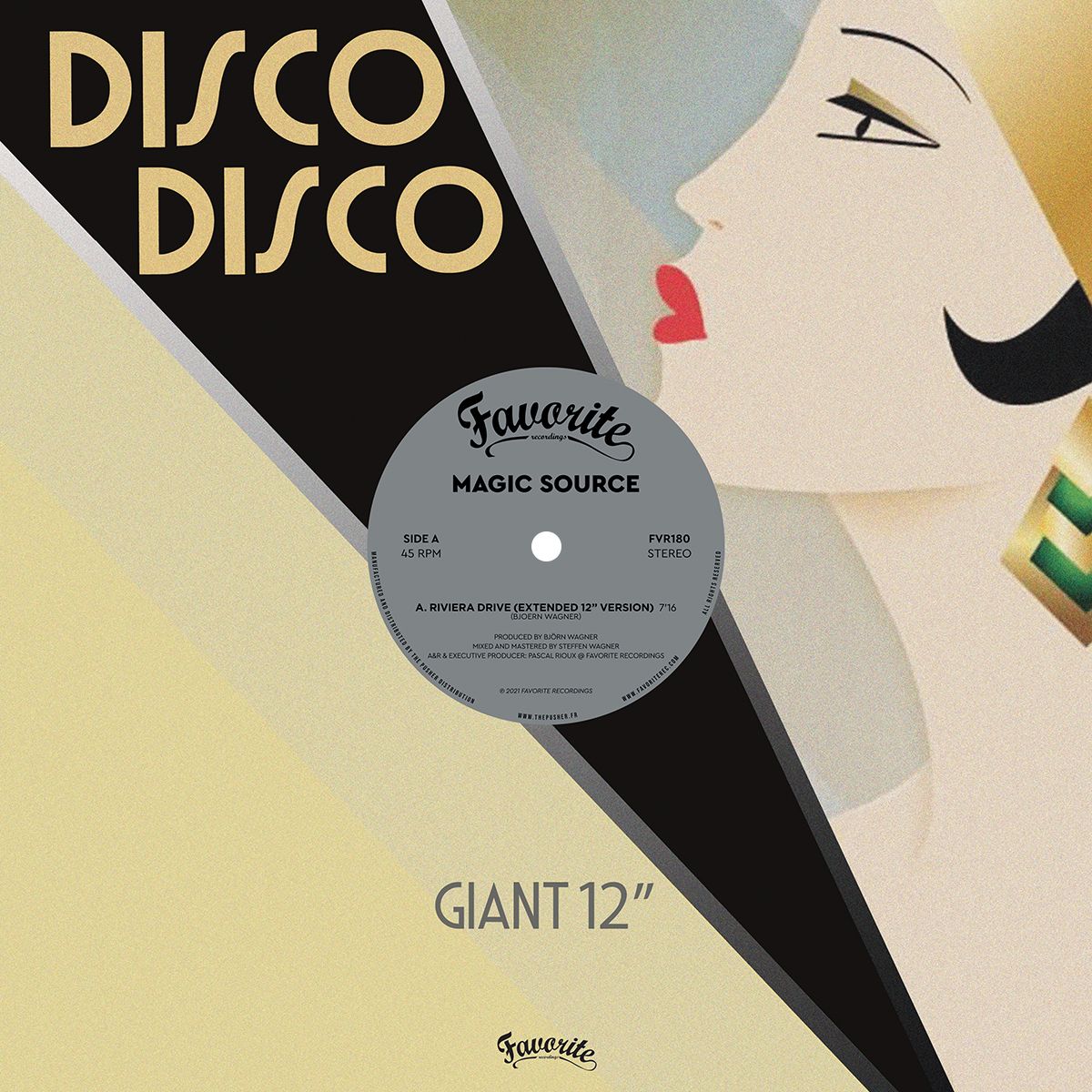 Favorite Recordings proudly presents the new 12" of Magic Source. The all-star group around producer Björn Wagner (known also for his cosmic and tropical-flavoured disco music as Bacao Rhythm & Steel Band and The Mighty Mocambos) creates here a hypnotic four-on-the-floor sound that is both earthy and spaced out and all their own.

Recorded on 16 track analogue tape with inexpensive vintage gear, the crew explores the more unusual facets of disco music off the beaten track in favour of more otherwordly and international stylings. In their music, one could hear echoes from lost tropical disco records, cinematic flavors from library soundtracks and a healthy dose of DIY garage funk rawness.

On A side, "Riviera Drive" is an extended Mediterranean disco groove based on hypnotic percussions and soulful horn themes that alternate with trippy keyboard excursions. The tune is equally at ease on the dancefloor as in a chill-out zone, but of course, prefers to be in its natural habitat in a classic car somewhere between Nice and Monaco.

On the flip, Tom Tom Club's "Genius Of Love" is reimagined as a jazzy yacht soul instrumental with an echoed flute taking the lead. You'll also find a shorter Radio Edit of "Rivieria Drive".

After their two acclaimed edits EPs, Mister T. Records are now joining forces with LA based producer DJ Duckcomb, to deliver a groovy selection of leftfield italo-disco cuts reworked for dancefloors. One year after the release of their 2nd EP, a tribute to Brazilian music, Mister T. records are now back with a 12” EP showcasing their love for obscure disco and Duckcomb’s amazing digging skills. This record aims to be a tribute to the very special sound of the late 80s electronic music and to both the artist’s and label’s lifelong passion for obscure italo disco.Famous as a record collector, Duckcomb has also made himself a name by editing forgotten jewels from classic disco to islands reggae. Part of both duos Sharegroove and Trap.Avoid, he’s been sharing his work and latest discoveries on his bandcamp and soundcloud for years and he has already released two EPs on Universal Cave and Pleasure of Love as well as edits on Cultures of Soul and Emotional Rescue.He’s now joining Mister T. Records with a 3-track EP compilation of hard to classify, slow-tempo, disco edits. On the A-side, Duckcomb partnered up with his longtime friend and DJ partner Dino Soccio, boss of California label Pleasure of Love, for a powerful rework of the German proto-house tune “Holidays”, with a new dancefloor oriented beat and emphasized tropical influences.On the B-side, he showed his editing skills working on two obscure downtempo tracks with that recognizable late 80s melancholic atmosphere. By removing not danceable parts, building DJ-friendly grooves and removing unnecessary vocal parts, he managed to come up with a smooth italo ballad with acid accents on “S.O.S.” and a beautiful balearic new-beat jam on “King (of) a Beat”.

Founded by the pianist Robin Notte (from the former electro-jazz band WISE) Panam Panic is one of the best Jazz-Groove french bands. Influenced by Musicians like Yussef Dayes, Robert Glasper, Roy Hargrove or Christian Scott, Panam Panic mix up Jazz with groove, Hip hop and electronic textures. The Black Monk is their first vinyl album.Robin Notte's gamble is to create a Jazz which is sufficiently sophisticated to delight the most demanding experts, yet also accessible enough to initiate neophytes.As such, Panam Panic defends a resolutely actual Jazz, open with no borders or blinders, combining powerful organic grooves with tidy melodies, delicate harmonies and frenzied solos

The Afro-Funk side of the Latin Soul maestro!Born in Gao (Mali), Boncana Maïga is one of the most talented and popular producer of West-African music since the 60's. He studied flute and Latin arrangements in Cuba during the 60's and founded the famous “Les Maravillas du Mali” in 1968.He became orchestra leader for the national Ivorian TV in Abidjan in the mid-seventies, and toured all over the world with the famous Africando band. During his recording sessions in NYC at the beginning of the 80's with a lot of “Latin musicians” from Puerto Rico, Venezuela or Colombia, Boncana Maïga also recorded few rare Funky tracks with heavy breaks! With the artist, we decided to reissue four rare tracks from 1978 to 1982 dedicated to dancefloor, including a really rare soundtrack for the oil company of Ivory Coast called “Petroci”.In 2018, he'll be back on tour with “Les Maravillas du Mali”, still have a weekly TV show on TV5 Monde and with this reissue will continue to warm your Afro-Funk parties!Fully licensed, 12inch vinyl (45 RPM) including interview. Remastered by The Carvery!

The French-Afropean duo is back with a new funky masterpiece album! DjeuhDjoah & Lieutenant Nicholson are French composers and afro-soul singers. The duo are creating a new vibe with French sounds and mixing it with Jazz, Afrobeat, Electronic and Soul. T’es qui ? was their first album released in 2015 and re-released a year later under the name Remets t'es qui? It was result of an intense collaboration that has lasted many years, on stage and in the studio. They call their music “Afropean songs”, a collection of Jazzy-Pop melodies, Afro-Soul and Funk arrangements.This new album has 15 songs, and features a tribute to the famous poet Aimé Césaire on the title. The Antilles are also honored with creole lyrics, and if you listen carefully – you’ll hear them distilled within the album. La Montagne Pelée's eruption in 1902 is evoked under the prism of “August Cyparis”, one of the three survivors. The rhythms are tight and focused, with some Antilles, but also Detroit elements thrown in, accompanied with a strong horns section, vibraphone and analog drums. There are lots of echoes from the era of Jazz funk and the lyrical French Mode, mixed with some slightly warmer currents that show their wider love of modern funk and eclectic tastes. It is a unique sound, an original recipe, using French wordplay with a universal message. Last summer, they presented the now critically acclaimed first single “El Nino”, an Afro-Funk gem about climate change, and “Fontaine”, an Afro hit with a great combination of analog take and electronic dance floor ingredients. With massive support from national radios and prestigious international DJs such as Gilles Peterson, Aimez ces airs could be one of the Top funky albums of 2019!Limited press on a deluxe double vinyl cover designed by the artist Felix, mastered by Dj Vas.