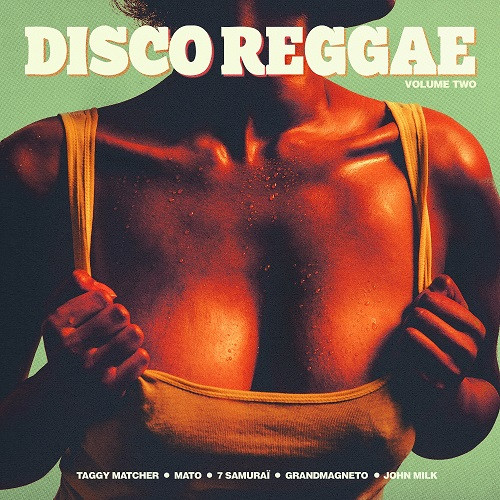 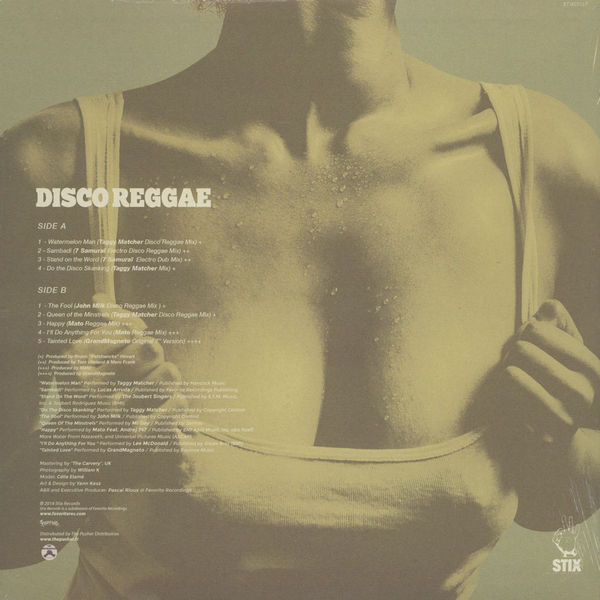 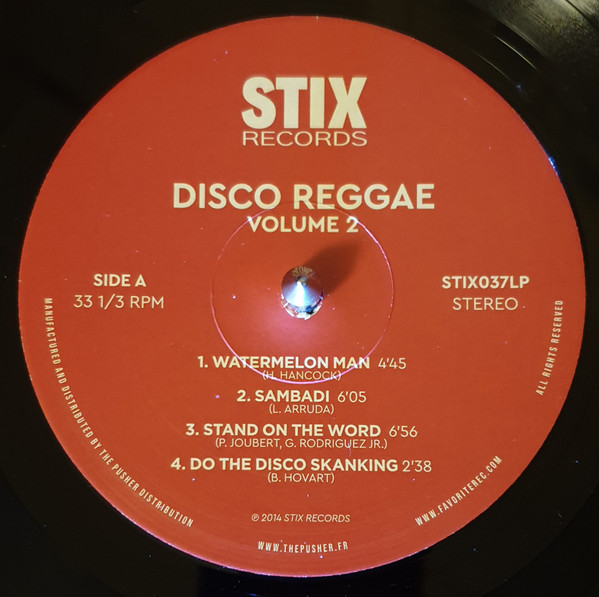 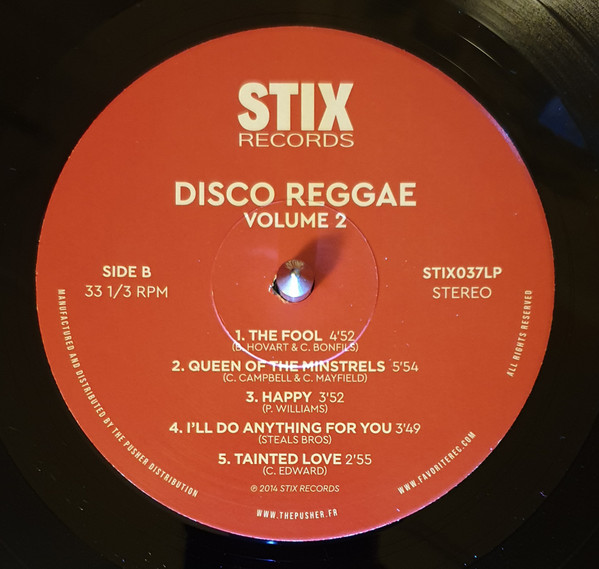 Stix Records is a sub-division of Favorite Recordings specialized in the exercise of producing covers with a Reggae twist.

Following the success of its first volume, the Disco Reggae series also expands with this 9 tracks compilation, composed with 8 new and exclusive versions by artists such as Taggy Matcher, 7 Samuraï, Mato, or John Milk, and the classic cover of “Tainted Love” by Grandmagneto. But this time, if they still explore famous hits like “Watermelon Man” by Herbie Hancock or “Happy” by Pharrell Williams, they also dug within the home labels’ catalog, taking over some of the finest titles by Mr Day, Lee McDonald, Lucas Arruda or The Joubert Singers.

Again this time, their swaying renditions seem straight out of the smoky studios from Kingston or Montego Bay, while also remembering the 80s Pop-Reggae sound of artists like Grace Jones or the less famous Earons. Everything is mastered and cut at Carvery Records (UK), known for their expertise in Caribbean and Disco music.

Lee McDonald - I'll Do Anything For You (Mato Reggae Mix)

** Available exclusively at The Pusher **After the recent reissue of their first eponymous album, Favorite Recordings proudly presents Vegas, the second LP from Venezuelan band Esperanto. Rare and sought-after for many collectors, it was recorded in between Las Vegas and Caracas and originally released in 1981. Following bandleader Jorge Aguilar in his musical trip to the infamous American city bathing into flashing lights and vivid colors, we're invited to an excursion in Disco, Boogie and Jazz-Funk territories. Finally reissued, fully remastered, Vegas will be available as Gatefold Tip-On Vinyl LP.With great care and attention to details, Esperanto managed to create a very convincing sequel to their Jazz-Funk debuts. Vegas keeps indeed a perfect balance between various influences. Through energic disco beats with intense funky solos, catchy AOR-influenced songs, where Jorge delivers convincing vocal performance, or sunny jazz-funk slow jams, the album still reveals something quite authentic. And this feeling echoes surely the one that could have been felt by Jorge Aguilar while discovering USA on a trip - where it all started for the music he loves. Like sometimes a foreigner's enriching view on some local specialty, he surely brought with the band all his authenticity and young but vibrant experience while convincing at the same time major labels for distribution.With certain notoriety coming with the release of their first album, Jorge Aguilar and his drummer Pablo Matarazzo planned to go to Los Angeles for a few gigs. But once there, they realized their contact had to leave for Tina Turner's tour in Europe. Before that, he invited them to come along to Las Vegas and eventually meet musicians there. Luckily, the plan worked perfectly: Jorge came back to Los Angeles with a lot of contacts then moved to Boston and NYC before finally coming back to Caracas. He told: "I was so impressed with this trip that I told myself that one day I would return to Los Angeles and Las Vegas. The first tracks I did them in Los Angeles with Kenny More, James Gadson and other session musicians from that city. Later, I took the tracks to Caracas where the musicians of the band recorded overdubs. After that, I returned to Los Angeles to master with Bernie Grundman who was still working in his small studio at A & M records studios in Hollywood. As can be seen in the title of some of the songs like "Hollywood", "Vegas", "Kenny's Place", were only the translation of my experiences at the time."

Founded by the pianist Robin Notte (from the former electro-jazz band WISE) Panam Panic is one of the best Jazz-Groove french bands. Influenced by Musicians like Yussef Dayes, Robert Glasper, Roy Hargrove or Christian Scott, Panam Panic mix up Jazz with groove, Hip hop and electronic textures. Love Of Humanity is their last album.Robin Notte's gamble is to create a Jazz which is sufficiently sophisticated to delight the most demanding experts, yet also accessible enough to initiate neophytes.As such, Panam Panic defends a resolutely actual Jazz, open with no borders or blinders, combining powerful organic grooves with tidy melodies, delicate harmonies and frenzied solos.

One of the best boogie records of Nigeria repressed for the first time. Produced in 1981 by Jake Sollo and performed by himself flanked by the outstanding funky bass by Randy Taylor and the great vocal performances from the Galaxy girls. Recorded and produced in England but originally released only in Nigeria.

Since the release of his 2 first albums on Favorite Recordings, Lucas Arruda has quickly established himself as one of the most talented young artist and composer from Brazil. His music is filled with fusion style, mixing influences and elements from his Latin musical background, with his genuine admiration for Jazz, Soul, Pop and Funk music.In spring 2015, it was also not surprising to find Lucas Arruda back with a new LP called Solar, receiving great supports and feedbacks from international media and tastemakers. One of the highlight of the album was the song “Melt the Night”, on which Lucas teamed up with legendary producer Leon Ware, reminding his collaborations in the 80s with Marcos Valle, when they perfectly merged together the sophisticated Boogie and AOR touch from California, with the blazing sense of rhythm from Brazil.Today Favorite Recordings proudly present Onda Nova, new and third album by Lucas Arruda. Mostly written, composed and arranged by himself, Lucas however teams up on a few tracks with his old mate Fabricio di Monaco (Modo Solar), his brother and musical partner Thiago Arruda, who recently joined Ed Motta’s live band, or Gaël Benyamin, also known as Geyster, who brings his longtime “savoir-faire” and skills for writing and composing AOR and WestCoast music genre, and who share this deep passion with Lucas.Onda Nova is therefore pursuing the music direction set with Solar, mixing touch of Blue-Eyed-Soul, Pop, Soul and Brazilian styles together, and influenced by the path of legendary Brazilian producer Lincoln Olivetti, who recorded some of the biggest stars of Brazilian music (Marcos Valle, Jorge Ben, Tim Maia…).In Lucas words: “In this record I really wanted to honor Robson Jorge & Lincoln Olivetti. They are the main influence on this record. We recorded the basic tracks for the album in the same studio that Lincoln Olivetti did his last works. So, this was very important to capture the true essence of Brazilian Funk/AOR tradition. Hope you guys enjoy it!”