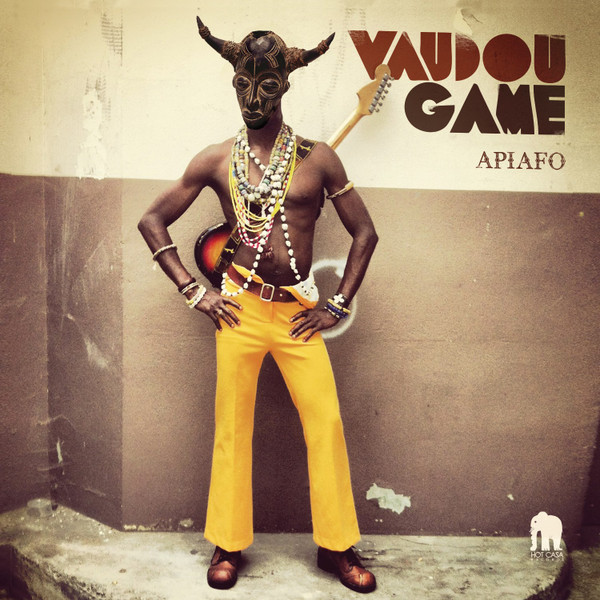 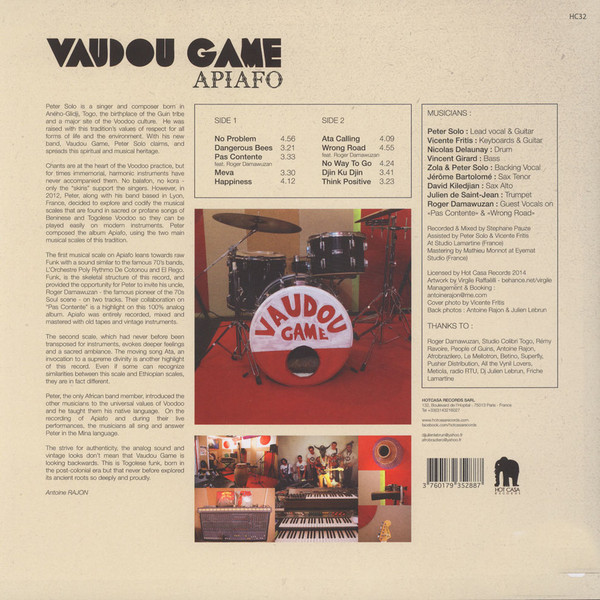 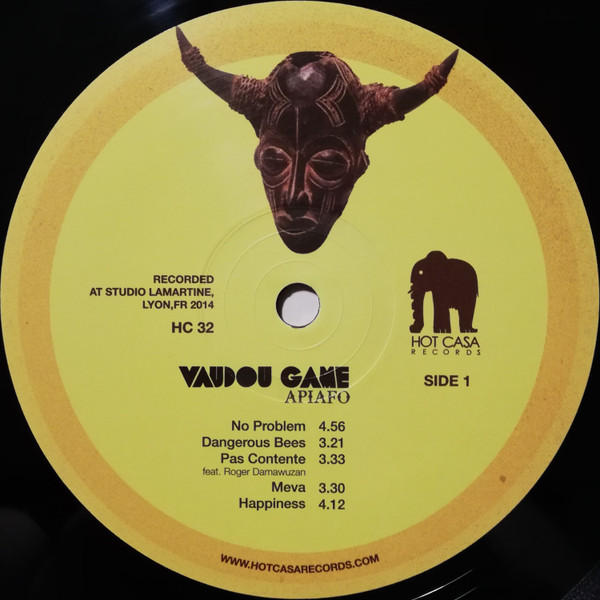 Vaudou Game is a contemporary live band of 6 members playing an authentic Togolese funk based on voodoo chants scales, and led by Peter Solo, a singer and composer born in Aného-Glidji (Togo), birthplace of the Guin tribe and place of the voodoo culture. He was raised with those traditional values of human and environment respect.

Apiafo is a 12 tracks album, entirely recorded, mixed and mastered with old analog tapes, and played with vintage instruments, recalling the sound of bands like Poly-Rythmo De Cotonou or El Rego!
Peter Solo invited his uncle, Roger Damawuzan, famous pioneer of the 70’s soul scene in Togo, to sing on “Pas Contente” & “Wrong Road“. The result of their collaboration is without a doubt two amazing future dancefloor classics!

The idea of integrating these haunting lines, sung in honor of the Divinities, to an energetic 70's Afro-funk style, was, in Peter Solo's mind, an obvious extension of the analogy he found between the voodoo tradition and trance inducers such as Soul, Funk, as well as the Rhythm ‘N Blues of James Brown or Otis Redding.

Vaudou Game will be touring all over the world next year promoting this new Afro-Soul classic album!

No Way To Go

The motor hasn’t had time to cool down and the belt drive is feeling the fatigue. But Charles Maurice is the kind of DJ who just can’t let a turntable rest. After steaming up the slipmat with three sexy compilations of French Boogie, Charles Maurice is back with Volume 4.In the late 70s and early 80s, while France was still firmly tuned into variety-show pop, a few enlightened ears and souls picked up the hypnotic beat of funk from across the Atlantic. These first warrior monks spread the good word in discotheques, jumped on newly available frequencies to fill the airwaves and, in some cases, took up instruments themselves to unabashedly build on the U.S. model. In a short decade stretching from the late 70s to the late 80s – just a blip on the scale of music history – they turned out material in abundance. Lush productions with colorful covers, groovy typeface and creative photo shoots…But first and foremost, they made music weaned on, spoon-fed and imbued with funk. Music defined by a groove with a robotic beat (Djeneba) that clearly hears hip-hop banging on the door, where layers of synthesizers, handclaps (Eric Chotteau), horns and African percussion line up and follow the all-powerful lead of the swelling slap bass (Cyrill). Music that tells everyday stories, both humorous and lovelorn (Serge Delisle), and often packed with pheromones just waiting to be released on the dance floor or sofa (Chris O’Hara). Shaped by synthetic textures, these productions are also spiced with Caribbean and Creole arrangements that reflect the West Indies’ critical contribution to French Boogie (Wai Kop, Acayouman).With his immaculate tailoring, slicked back hair and clipped moustache, Charles Maurice has once again transformed himself into a HiFi stylus to explore the groove traced by this specifically French musical style. From 45 to 33 rpm, he has traveled the black spiral to bring us a new selection that proudly features a number of rarely heard pieces and even an unreleased track by Marco Attali. True to form, Monsieur Charles carefully crafted this fourth volume from his personal collection of impeccably restored and mastered vinyl recordings.Charles Maurice, where French elegance meets uncompromising musical taste.

For its second release, NUBIPHONE is proud to present you SUNSHINE, a privately pressed Afro-Jazz-Folk UFO album recorded in 1980 by the Cameroonian Singer, Musician, Actress, Seamstress & Poetess LIZA NGWA.Individually-numbered Official Deluxe Edition, limited to 500 copies!Comes with a beautiful exclusive poster, a handwritten insert from Liza Ngwa herself with the lyrics of the album and a download card.

Voilaaa is one of the many projects led and produced by Bruno “Patchworks” Hovart, who’s proven over the past 15 years, his place amongst the finest producers of groove music in all genres. This time exploring the wide spectrum of the African and Tropical Disco scene, he received a massive international support for Voilaaa’s first album, On te l’avait dit, released late 2015 on Favorite Recordings.Following to that success and pursuing the same direction combining of the festive, yet sometime futile nature of Disco, and the instinctive, deep, sometimes rough nature of African music, Voilaaa’s now presenting its 2nd efforts, Des Promesses.The 13 tracks of the album are again up to expectations, and Voilaaa has not finished feeding international dancefloors with heavy Afro-Disco music. Alongside Bruno at the production, singers Pat Kalla and Sir Jean are back providing their carefree lyrics and Afro vibes, and Senegalese artist Doctor Lass comes to extend the team, with 3 brilliant titles, including a great Funky cover of the classic “Mandjou” by Salif Keita and Les Ambassadeurs Internationaux..

Afro funk and Political Soul from Togo.Recorded in the beginning of the 80's and self-produced by Itadi in 1983 , this obscure album contained deep soul and controversial rare grooves backed by the 5 band members called the “Afro Funk Band de Lomé”.Itadi's music is unique, in his second album, he kept the same recipe: a mixture of soul, reggae, hi-life and Funk, with heavy lyrics which sounds like slogans and caused him big trouble after its release. He was obliged to escape the country to USA. A real definition of a revolutionary musician!This deluxe LP contains also two unreleased tracks, interview, and photos and was fully licensed with his family.Remastered by Frank Merritt at Carvery Studio.