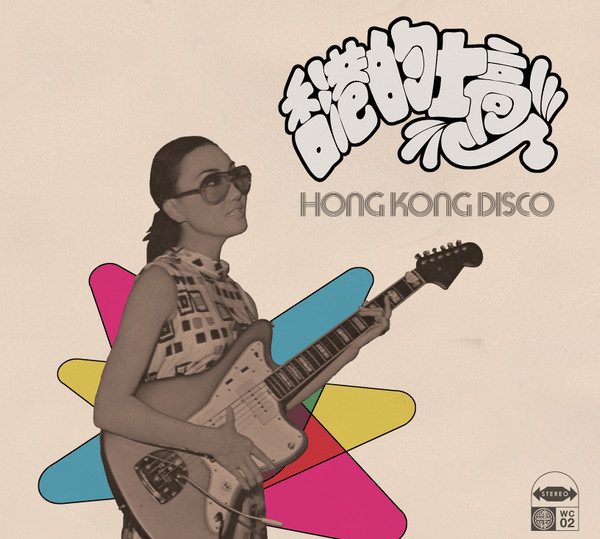 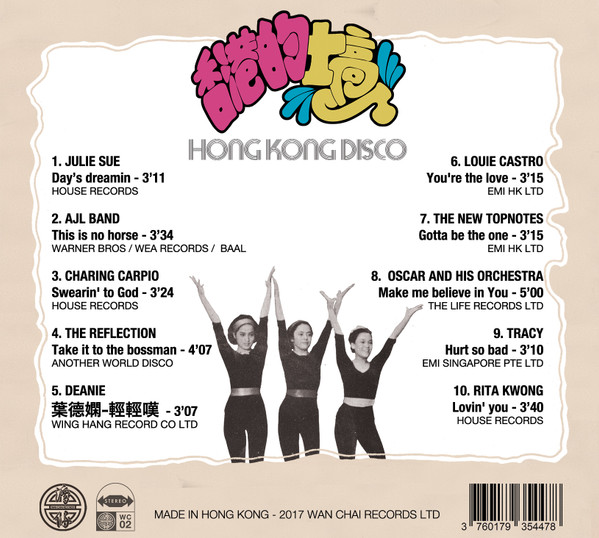 Wan Chai Records is a Hong-Kong based label, specialized in rare Asian records and quality reissues.

After a few years of hard diggin’ in Asia, meeting the artists and many local figures of the 60’s, 70’s and 80’s Scene in Hong Kong, Singapore, and Taiwan, they wanted to share their best finds and put them together on vinyl with the best productions ever made in Soul-Jazz, Disco, Funk, Modern-Soul, and AOR.

The result is a selection of 10 totally unknown gems sung mostly in English and Cantonese with amazing covers of classics like “Lovin’ You”, “Make Me Believe In You”, or “Hurt So Bad” in a nice Artwork Gatefold LP.

AJL Band - This is no horse

The Reflection - Take it the bossman

Oscar & His Orchestra - Make Me Believe In You

The New Topnotes - Gotta Be The One

Louie Castro - You're the love

Harlem Pop Trotters is one of the best jazzfunk albums in the French library, and one of the grooviest too. Written & produced by Jean Claude Pierric & François Rolland for Les Tréteaux in the mid ‘70s, this real masterpiece is now reissued on Underdog Records (Janko Nilovic, Martial Solal) in a rare colored edition!

Interpretation Of The Original Rhythm…

Born on June 28 1936, in Edikwu Village, Oturkpo, Idoma Division, Benue Plateau State, Nigeria, Ray Stephen Oche comes from a family of musicians, singers and flute players. His ancestors and folks were undisputed celebrities in the many music festivals of his native region, especially in the 30's, and Ray just followed with amazing ease and talent, the path they had so gloriously thread.From the tender age of 8, Ray was already an outstanding flute player in his village school band. Soon after, Ray joined local bands and became a first rate Obinde singer and started travelling extensively, visiting every part of Northern Nigeria, where he entertained Idoma communities.In 1953, Ray arrived in Lagos and quickly found his way into the best musician's circles, joining Stephen Amechi's and, later on, Bobby Benson's groups. Shortly after he found his own band, Ray Stephen Oche & His Orchestra, and quickly performed in Kano, Kaduna, Ilorin, Enugu, Aba, Port Harcourt or Ibadan. Coming back to Lagos, Ray decides to go to Accra (Ghana), where he achieved his musical studies at Ghana Military School of Music and, later, became a favourite of late Kwame N'Krumah. While staying in Accra, Ray met the world famous drummer and percussionist, Guy Warren, who is supposed to have delivered Ray with the secret of the authentic African rhythms.In March 63, Ray returned to Lagos, where he collaborated with Chris Ajilo & His Cubanos, before forming his own new band, Outter Space, with which he toured Sierra Leone. That's also where he ended invited to perform a series of private shows for the prime minister. Ray then visited Gambia, Senegal and then Paris, where he arrived in 1965. He and his band performed all over Europe in Switzerland, Spain, Italy, France, etc…After the memorable "Festival de Montparnasse" in 1970, Ray Stephen Oche joined Alan Silva & His Celestial Communications Orchestra for several shows and festivals. In 1971, he collaborated with Noah Howard Quartet and played for the Copenhagen Radio, the University or the famous "Montpartre Jazz Club". After having worked successfully in Germany and Holland, Ray came back in Paris where he raised his Freedom Suite Orchestra, this time bringing him to Algeria or Tunisia.Famous in many Jazz circles and at the SACEM, Ray is now leading the Ray Stephen Oche & His Matumbo (in Angolese language, Matumbo means: "Gifted with various talents"). This band is composed mainly of African musicians from Congo, Togo, Guinea or Gambia, but also with others from Brazil or French West Indians. The band main purpose was to shed more lights on the diversity of African melodies and rhythms.As a calm, gentle and discrete person, Ray answers very genuinely when questioned about his beliefs: "Of course I believe in God!!" This makes even more sense when you know that his real name, Owoicho Oche, means "God is the King".

Nkumba System, new project led by guitarist Guillo Cros (Romperayo) provides a vibrant fusion of catchy percussions, Afro-Colombian songs and Cameroonian guitar picking style linking Central Africa to the Caribbean! Nkumba System is about to fill the dancefloors with debut album ¡Bailalo Duro!, recorded between Bogotá and Paris.On the imaginary highway of Guillo Cros, makossa crosses paths with cumbia, Zairean rumba combines with that of Cuba and last but not least, currulao melts into Malian desert blues. Cros' journeys led him to meet the Cameroonian singer Mama Ohandja, alongside whom he trained for several years. Thereafter, he resided in Bogotá from 2014 to 2019, collaborated with Pedro Ojeda in the band Romperayo and “Los Propios Bateros” (7” NYCT). His current project Nkumba System was born in 2018, inside Colombia's effervescent tropical music scene. The original line-up includes bassist Jhon Socha (Romperayo, la Makina del Karibe), singer-percussionist Leonel Merchan (La Phónoclórica) and Kike Narvaez on drums. Several singles were released on local labels Tambora Records and Palenque Records, preceeding the arrival of Cameroonian guitarist Simba Daniel Evousa in the band. The drummer Pedro Ojeda, travelling companion in Romperayo, is invited on the track “Mujer hermana”, as well as the Malian singer Mamani Keita on “Paisano”. The album is mixed in Amsterdam by sprawling musician Alex Figueira (Fumaça Preta, Conjunto Papa Upa, Music With Soul), in his studio Barracão Sound, and comes as a Limited Pressing.

Almost 2 years after the success of the album THE TONY ALLEN EXPERIMENTS and a few months after the release of the 7inch AMORE, Nu Genea (Nu Guinea) return to the scene with a new LP published by their newborn label NG RECORDS.After touring the world looking for sounds suitable for their vibrations, NU GENEA (Nu Guinea) decided to go back to square one, Napoli, where Massimo Di Lena and Lucio Aquilina were born and raised. They watched their city from a distance reconstructing its energy from their studio in Berlin, calibrating the synths on the meridian of Vesuvius, the volcano that has always protected and threatened Napoli.NUOVA NAPOLI is the result of a long musical research that has become a historical investigation on the sound that shaped Napoli during the ‘70s and ‘80s, starting from the contamination of genres (disco, jazz-funk, African rhythms) which ended up in Nu Genea’s DNA.In this album the synthesizers fill the spaces between the past and the future, tightening in a single body acoustic instruments, electronics and voices in Neapolitan dialect. It is the first time that the duo has worked with such a large group of musicians, some of whom are exponents of the contemporary Neapolitan scene.WARNING: We recommend listening to Nuova Napoli while walking in the alleys of Napoli’s historic center, around wet clothes hanging and street vendors on tiny three-wheelers.

Frédéric Gassita discovered music at the age of five. In 1977 he left Gabon to study in France. His tutors in France spotted the talent of the young man and decided to enroll him at the Conservatory of Music in Châteauroux, where he learned classical music, composition, and perfected his practice of piano, bass and guitar.Back in Gabon in 1983, Frédéric decided to form the band "Surprise" with his longtime friend Jean-Jean Gateau. His musical influences – his parents introduced him to a lot of music: Afro-Cuban music, Jazz, Soul or RnB. - forged the sound of the band as well as a strong inspiration from the US Funk that invaded the radio waves of Gabon. The Guitarist Célestin Assélé Bongo joined the band and provided them the necessary means to record an album. Florence Nang Ekomye, a talented self-taught jazz singer, is immediately recruited, being the voice of Surprise.Benefiting from the unique recording conditions of Studio N'Koussou in Libreville (set-up by Patience Dabany in the early 80s), one of the handful studios to use a Digital 48 Tracks recorder at the time, the young musicians had the strong desire to get the perfect sound: "It took us almost a year to finish the album. We were young and we wanted to do the best we could so we dithered a lot on the choice of songs ..." The result is a sensational production, the use of synthesizers is slamming and the charm of Florence’s voice makes the recording quite unique.Beleive Me is an outbreak considering what was being done in Gabon at the same time. Indeed, the vast majority of small Gabonese bands were still mimicking the sound of James Brown in cabarets… The record unfortunately did not meet the success the band expected and seemed to have never really benefited from a real marketing. A year after the release of Beleive Me, Frédéric flew to the U.S. and joined the Berklee College of Music in Boston where he studied for six years; the band never recorded together again.Totally unknown until recently, Surprise, primarily an early work from the great composer, still sounds fresh and crisp and we hope it will now get the attention it did not get upon release.