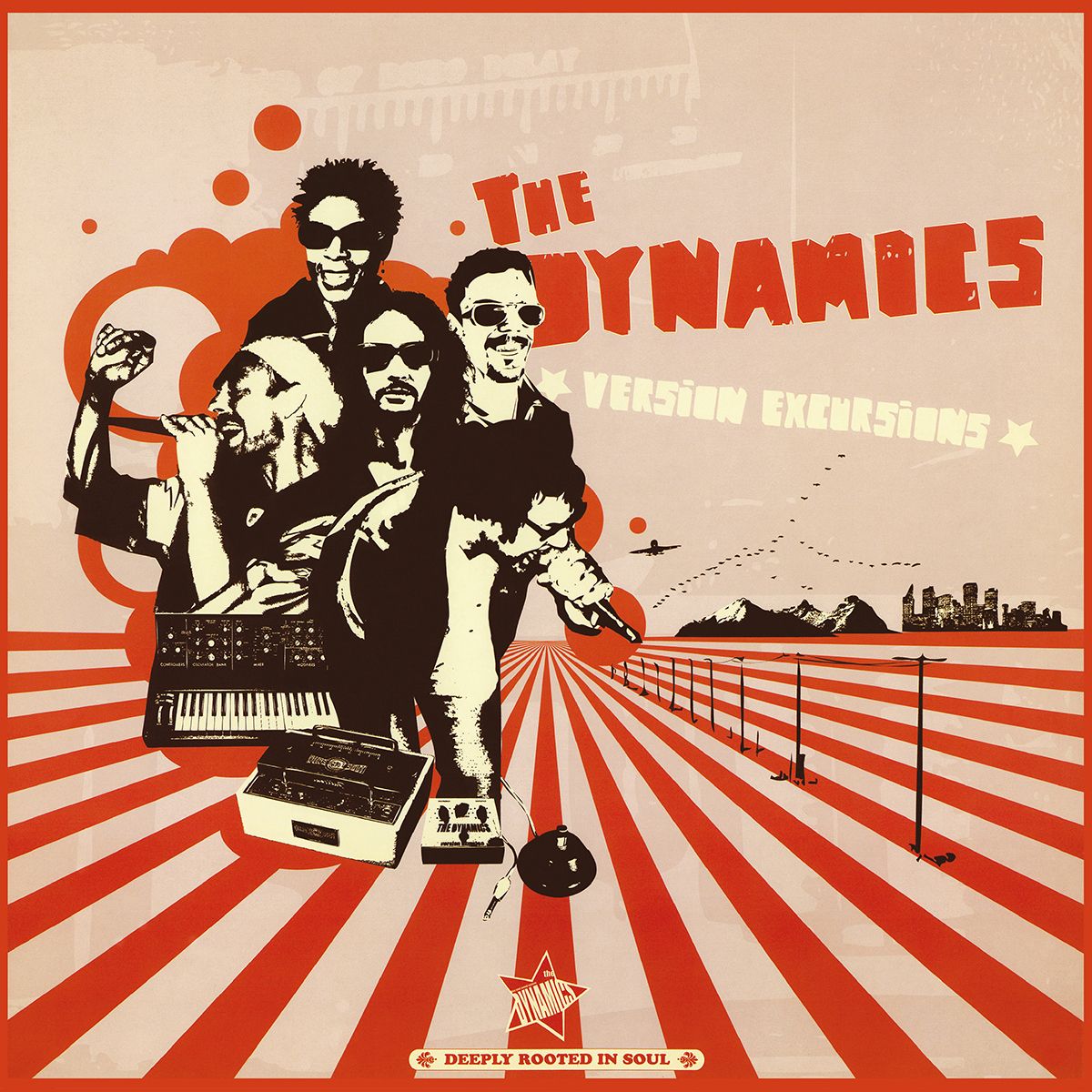 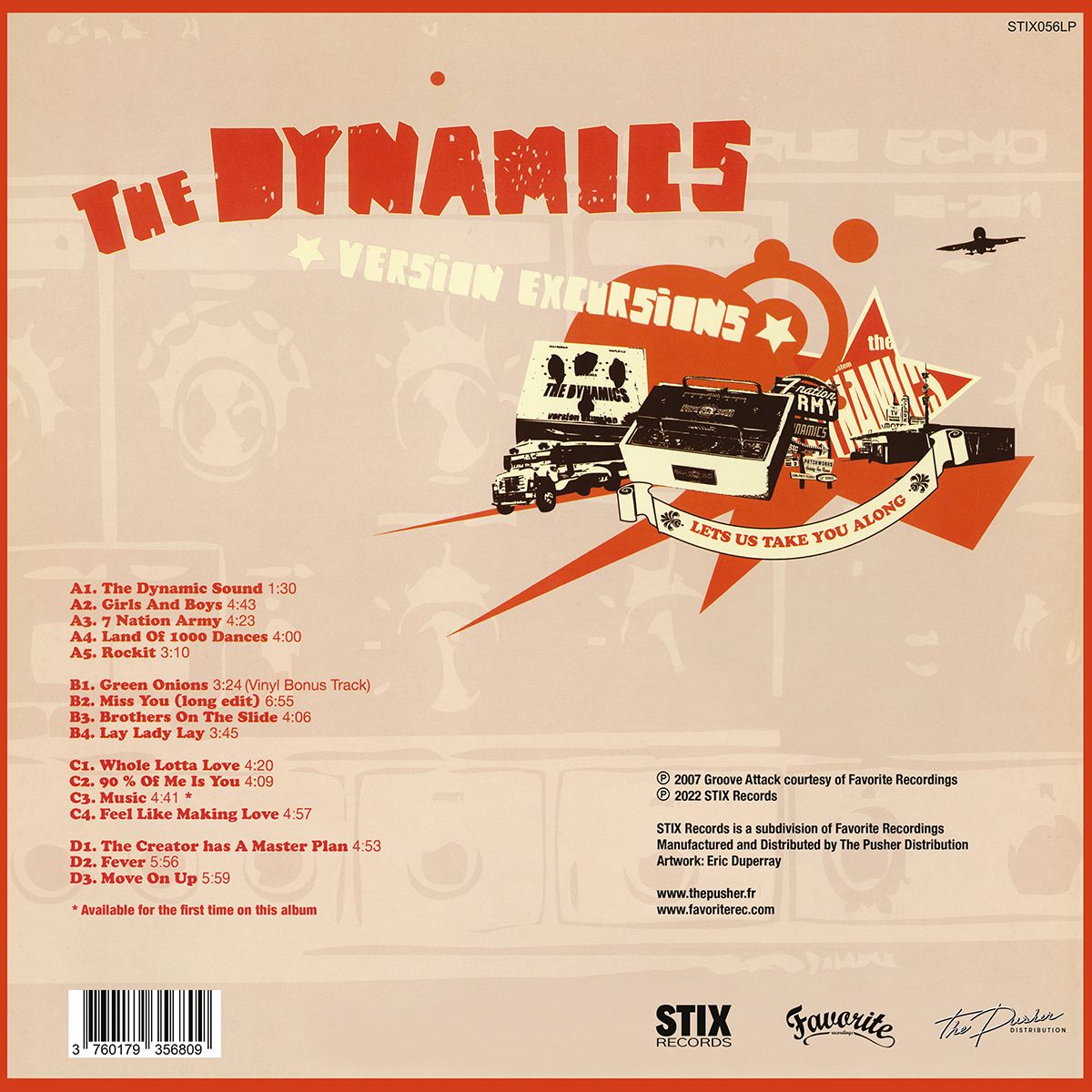 Stix Records, a sub-label of Favorite Recordings, proudly presents the long awaited reissue of Version Excursions, first album by The Dynamics. Originally released in 2007 and highly hard to find today, it could be considered as a modern reggae classic.

The band composed of Bruno “Patchwork” Hovart (production & programming), Eric “Flab” True (programming) and a vocal trio made of Mr Day, Sandra “Mounam” and Stevie Levi, quickly became famous with a 7inch single series, displaying their unique recipe of covers from classic hits by Madonna, Curtis Mayfield or The White Stripes to name just a few. True to Rocksteady and Reggae’s timeless tradition, everything from Pop, Roots, Disco, Soul & Rock is distilled through their fuzzy hypnotic filters to create amazing cover versions.

Originally hailing from the villages of Cameroon, the halls of Harvard, the palaces of Versailles, the boweries of Bristol, or the squares of Provence, it’s then in Lyon that The Dynamics united and created their timeless music, both vintage and fresh. 15 years after its release, the album’s still a real success, with more than 350k listeners on Spotify every month. An achievement easily explained by the quality of the tracks gathered, which also brought the original release to become quite rare years after years, now selling for crazy prices on the second-hand market.

"Whole Lotta Love" (Led Zeppelin), "Fever" (Peggy Lee), "The Creator Has A Master Plan" (Pharoah Sanders), "Lay Lady Lay" (Bob Dylan), these are only a few of the Rock, Pop, Soul and Jazz most famous hits reimagined by The Dynamics. In addition to the original tracklisting, you'll find on our 2022 remastered edition their cover of "Music" by Madonna, previously only available as 7inch.

Brothers On The Slide

The Creator Has A Masterplan

Few years before the international hit “Uptown Top Ranking”, made with his friend Donna, Althea Forrest recorded “Hey Mister” for famous producer (and singer) Derrick Harriott.Mid 1970's, Derrick Harriott is the best reggae-soul producer in Jamaica. He's made tons of US soul cover with Jamaican artists. “Hey Mister” was recorded at Federal studios (Tuff Gong nowadays) and didn't get an international audience, not even in Jamaica, probably because it was not a cover!For the first time since 1976, “Hey Mister” is now available on a Maxi vinyl 12'' to offer the best sound quality. Thanks to Derrick Harriott's master tapes and to the original artwork, now you can play this tune in the perfect condition.

All Nations Records new instalment in 2021 is all about a sweet stepper riddim involving three new artists on the label. First comes the magnificent voice of Amelia Harmony from UK delivering a message of hope when all lessons get learned, followed by a dangerous dub version. Next is legendary underground Rastafari singer Ramon Judah, hailing Jah to come and deliver us from trials and tribulations. Last but not the least is female artist Jah 93 from Japan who reinterpreted the riddim with a mellow but strong line of melodica. The maxi 12” is wrapped up wisely by a straight version of the riddim built, arranged, mixed and mastered by Simon Nyabinghi.

An Introduction To Larry Birdsong…

For the 4th edition of our Southern Sounds Series, focusing on the forgotten legends of Soul, Funk and Rhythm & Blues, we decided to hit the road to the mythical city of Nashville, Tennessee.This musical headquarter has been a playground for the colorful Larry Birdsong, one of the most beautiful voices of Nashville’s R&B scene golden age. Such a great voice that some people predicted him to a stunning interstate career. History unfortunately has proved otherwise; despite his ability to fit with any genre, whether it’s Jazz, Gospel, Rock’n’Roll, Rhythm & Blues, or Soul, this musician with a predestined surname (Birdsong) never made it as expected, however he delivered some high quality recordings, made with a lot of dedication.Larry was born in June 1934 to a 11 children family, in a place called Pulaski, a small town located in old deep rural Tennessee. Music was everywhere at the Birdsongs and before his 21th year, Larry was already one of the top acts of the Sugarhill club in Nashville. Ted Jarett, one of the big figures of Nashville’s recording industry, also noticed him and signed him in as an underage musician, to close a first deal for the Excello’ imprint in the early 50’s. He was later followed by a bunch of local records companies like Home of the Blues in Memphis and Ace Records in New Orleans, to name just a few.Up to the middle of the 60’s, Larry surfed from Rock’n’Roll to Rhythm & Blues and finally, at the end of the decade (up to 1973), he landed on the waves of Soul, even Funk, when he was backed by prestigious musicians like Johnny Jones or Buford Majors, as compiled on this volume.Although Larry Birdsong never reached any national or international charts, this versatile singer kept on singing until he passed away in 1990 (or 1983 from some sources), leaving behind him these singles that EALZ! Records are once again very proud to release, so that you just have to spin it on your record player.