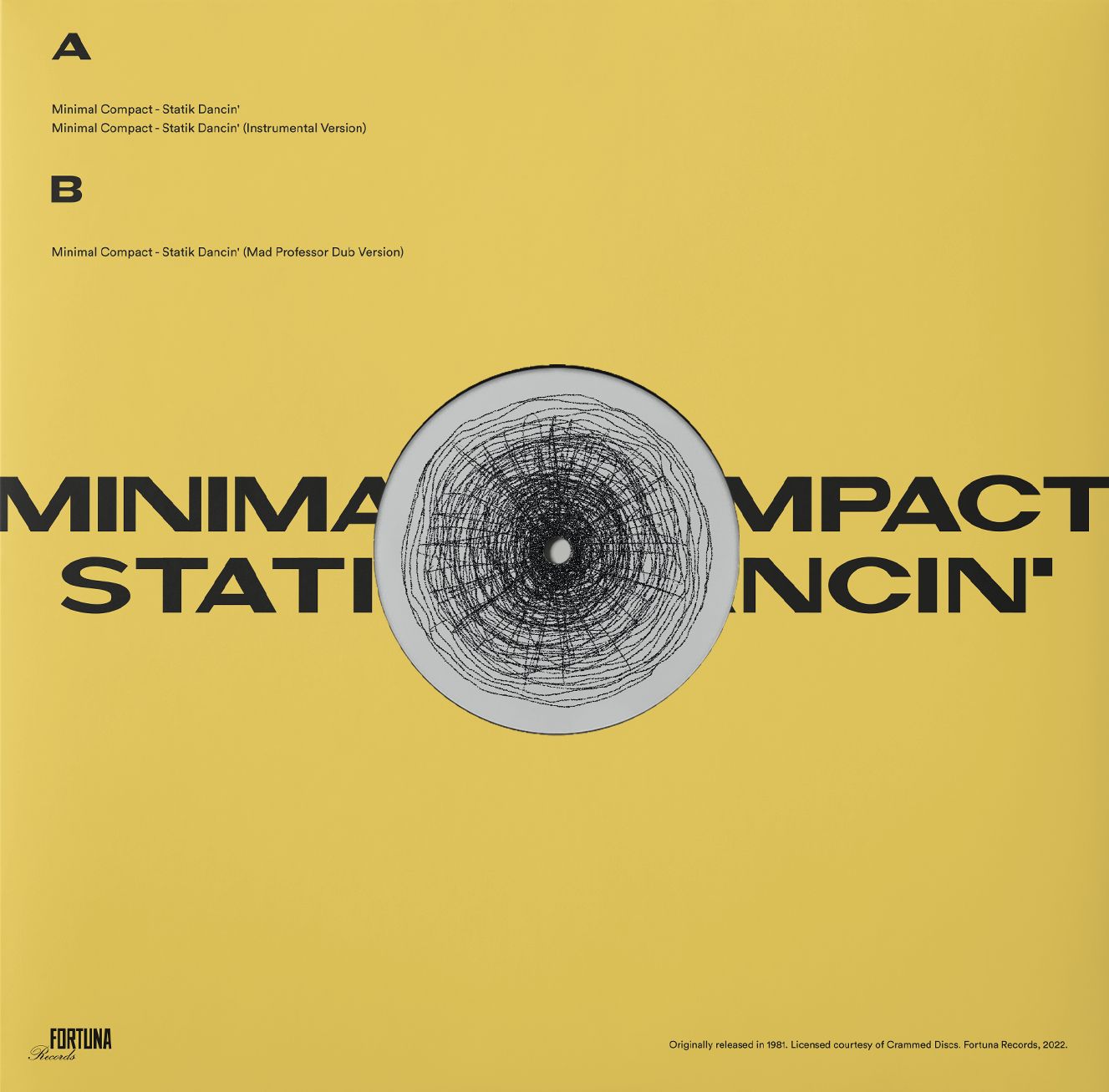 An unbelievable post-punk shuffler from 1981, by Tel-Aviv-Brussels band Minimal Compact! But this is no ordinary reissue! The 12'' includes an unreleased instrumental version plus a spaced-out extended dub mix by the living legend, Mad Professor! Killer stuff as ever from the Fortuna Records crew!!!

Transversales is very glad to announce the release of Mémoire Magnétique Vol. 2 spanning 1966-1993, revelatory collection of short and secret music by electronic music pioneer Bernard Parmegiani.Since the late 50's, Bernard Parmegiani, a major figure of electroacoustic music and a founding member of GRM has created some eighty two concerts music. From the start, Parmegiani’s work was closely linked to the screen, with dozens of documentaries, films, long features, animation films but also musical pieces for dance, stage or television. If many of his pieces are landmarks in the history of electroacoustic music (De Natura Sonorum, La Roue Ferris…), his application music compositions are strongly embedded in the subconscious landscape of the French public (Stade 2, Roissy Paris Airport…).The second volume of this compilation allows us to discover some of unreleased rarities from Bernard Parmegiani’s personal archives and unpublished recordings which were composed for the screen or the performing arts.NEVER RELEASED BEFORE / REMASTERED FROM THE ORIGINAL MASTER TAPES / EXCLUSIVE AND EXTENSIVE LINER NOTES

Les Disques Magnétiques is a new sub-label from Les Disques Bongo Joe presenting their first release with Ediacara, by Ethyos 440.Emerging from Geneva’s underground scene, Ethyos 440 is the meeting of groove band L’éclair and DJ/producer Dj Laxxiste A. This ultimate late-night-infected-dub-live band pairs sequencers and human grooves, analog instruments are played live on riddims, fx’s, and samples manually executed with a dub-mix approach towards the extreme.This this brand new EP will fit perfectly for any party, any DJ set or any late night playlist.

For their 50th release, Favorite Recordings are back with a wicked official reissue Human Egg : a super-obscure oddball disco funk goodie by French studio wizz Jean-Pierre Massiera, the man behind cult classics such as Venus Gang’s “Love to Fly” and Herman Rocket’s “Space Woman”!The Human Egg album was recorded in 1978 at the Antibes Studio in France, featuring purely french musicians. Don’t miss this rare masterpiece on Favorite Recordings.

Detroit/Chicago and odd techno/house sounds influenced French producers Marius Cyrilou and Popodi Venturi to come back with a new banging crossover project called MOTORBREMSEN. Marius and Popodi already had many digital and vinyl releases on various labels like People Potential Unlimited records, Omega Supreme Records, Outrun records and on their own labels, La Maison Venturi, Bazaar Records under the names of Spaced Out Krew, The Ceeofunk Band or Westbrook (and many others more).This 5 tracks EP gathers many influences such as Theo Parrish, Moodymann ("So Confused") or Drexciya-n sounds ("Sanctuary"). Some deep and dark bassy house mood concludes this ep ("Human Freaks" , "Riding Over The Darkness"). Besides this, the marvellous voice of Mae Rojas (The Ceeofunk Band) comes with a sensual touch on the track "Tiger Prey (Radio Edit)". This EP gives an instant deep feeling of a happy-to-sad mood, with mysterious and sexy moments.On A1 "So Confused", Don’t be confused, this is music to drive by in the hood with your low-rider. Gangsta boogie house at his climax for fans of Moodymann, Theo Parrish and all the raw house music mood. On A2 "Tiger Prey (Radio Edit)", with the help of Mae Rojas (Cee-O-Funk Band) on the mic, Motorbremsen keep pushing their unique vision of house music : soulful but raw, relaxed but not so slow, catchy but weird at the same time. On A3 "Sanctuary", let’s get on an electro-funk territory here. The guys explore a sound that can be rooted in seminal Arthur Baker’s productions and Drexciya’s mood but this a strong psychedelic feeling that is truly unique. All this comes with the special Motorbremsen’s touch of course. One for the B-Boys on acid... On B1 "Riding Over The Darkness", get in the D’s train for a cruise. Laidback house with a monstrous bass and this almost G-Funk feeling. Hmmmm… delicious ! One for the lovers. On B2 "Humanfreaks", let's get a bit darker. What begins like a bumpy beat get you little by little in real moody trip in a hot warehouse. Detroit techno muscular funk-infused inna 2021 style (by two guys who never listen to a Transmat record of their lives).

**** DIZONORD DEADSTOCK ****Dizonord team discovered DJ Moppy’s Detroit’s label Animal Right Records back in 2016 on a Detroit Threads’ shelf. ARR-003 was previously released in 2018, a childish trip into the funk reminding both Moodymann and Talking Heads, yes ! A spaced out funky good time… Fart #1 - The A side is full of farts for the dancefloor.. Sure to have the whole place smelling of funk and get the bootys' moving… Fart #2 - The B Side brings a more laid back Farty Atmosphere with a nice groove to dance to. Constance K provides some soothing messages for stinking it up when you really need to fart it out. Guitar by Alec Oroza.200 copies pressed!

Ahead of its forthcoming compilation House Of Riviera, Mona Musique releases a sampler EP that contains three tracks selected by label manager Nick V, taken from the golden age of Italian House Music, two of which are exclusive to the EP. Side A is “I Have Got It” by Ricky Montanari and Davide Ruberto under the alias Riviera Traxx, a moniker shared with various other Riviera producers. Released in 1997, this is the only track that is out of the 1991/1993 time scale that the compilation focuses on, standing alone thanks to its tough hypnotic drum beat and diva vocal stabs that are very reminiscent of the Junior Vasquez NY Sound Factory era. This was initially featured on Riviera Traxx 4 in 1997, the fourth and final release of the cult “Riviera Traxx” series on legendary Italian label Irma records.On the B side are two cuts that are typical of the deep and emotional vibe of classic Riviera House productions of the early 90s. Firstly Ivan Iacobucci, Fabrizio Cini and Nicola Dragani deliver “Tribal Love” under the name of Anxious. Originally released in 1992 this was the B side cut of the Saxample EP, the first release of Hole records a label run by Ivan Iacobucci that enjoyed over 30 releases over the 10 following years. Subway Ground Master complete the release with the superb “Queensway” taken from their only ever release in 1992 on Calypso, a sub-label of Irma records