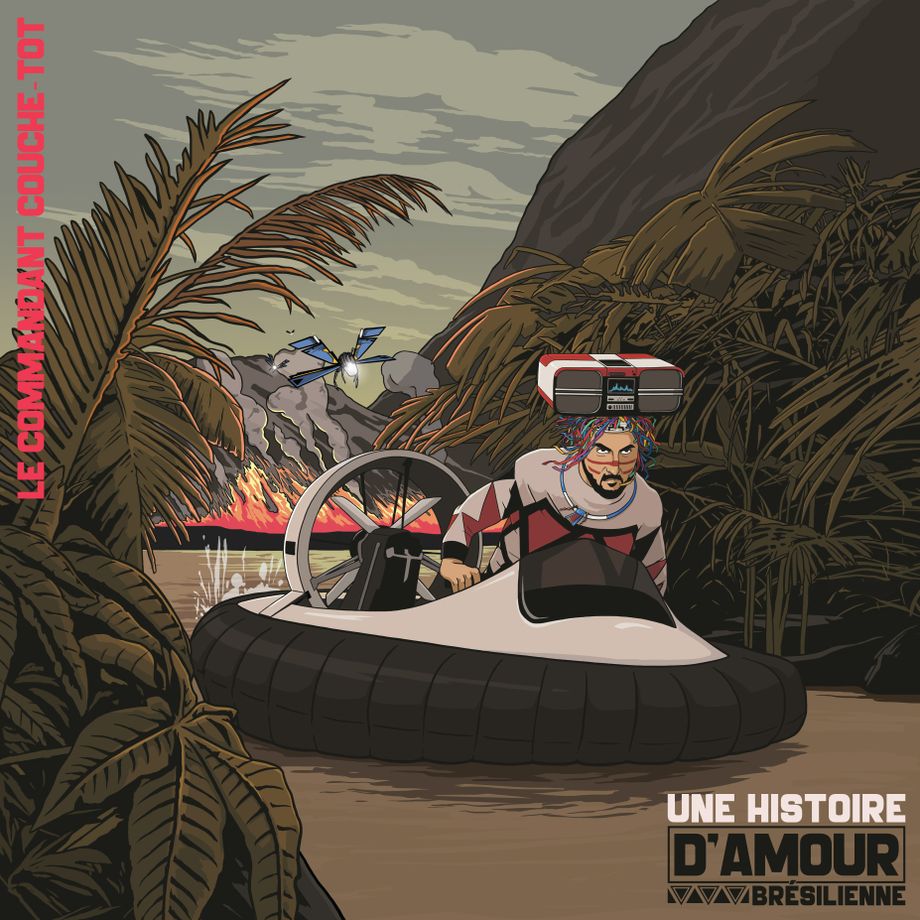 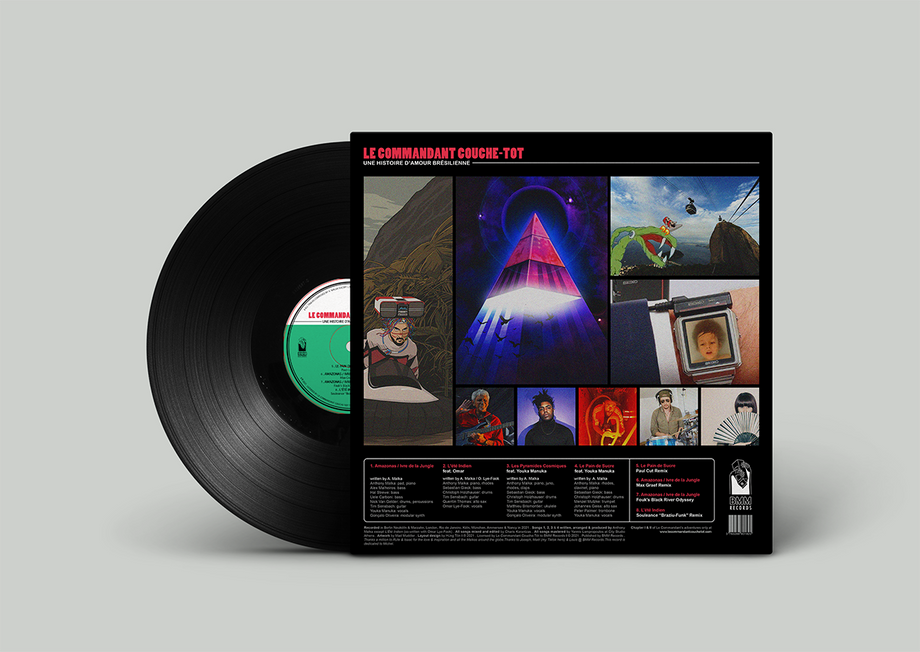 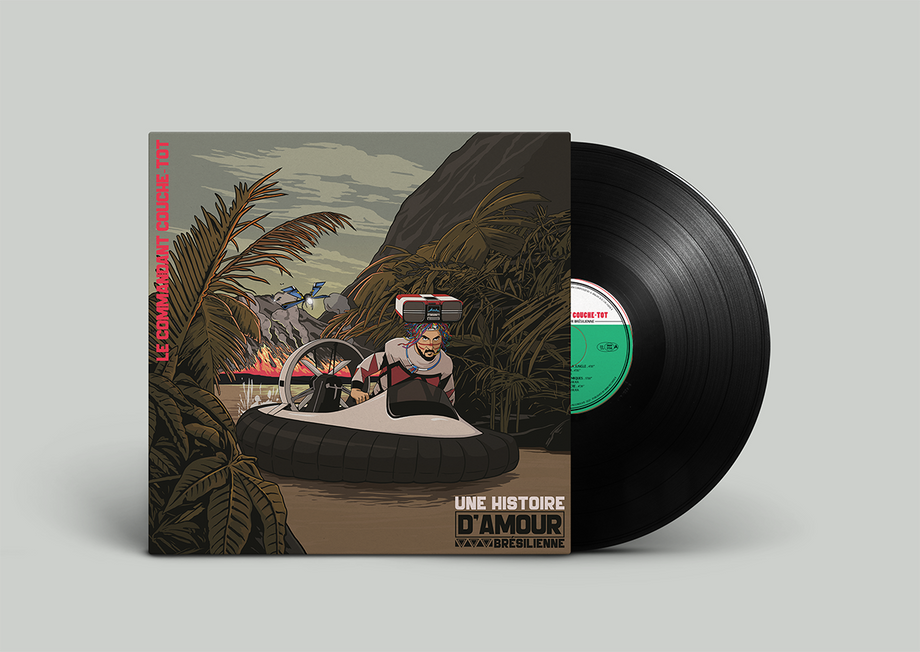 For the second chapter of his odyssey, we find again Le Commandant Couche Tôt in the middle of the Amazon River, escaping from drones and wildfires in a hovercraft.
Une Histoire d’Amour Brésilienne (A brazilian love story) shares a dystopian vision widely inspired by the environmental issues of 2020 and 2021, which illustrates a form of anxiety toward the future.
Its soundtrack however is purposely the antithesis of the story: a very optimistic tribute to space-disco and brazilian funk. A “good vibe” pill to give hope for a new beginning.

Favorite Recordings proudly presents an exclusive eponymous LP by Brazilian singer and composer George Sauma Jr., originally produced in 1985. Imagine a never-marketed release on which you’d hear not only the beautiful and genuine George’s songs but also the work from two figures of the Brazilian Music Golden Age: Arthur Verocai and Junior Mendes! A much-needed album for all Brazilian connoisseurs. Back in the days, George Sauma Jr. was a young artist from Rio de Janeiro, learning on his side how to play chords and compose songs since he was 10. Still at the university, he’s influenced by Brazilian artists like Cassiano or Tim Maia, deeply fascinated by the arrangements and the “levada” (the groove) of all these new Brazilian songs. Simple and romantic music that resonated to his soul and creativity.Around 1985, the story took an unexpected turn. George tells: “Dna Deyse Lucidy, the mother of Junior Mendes was a candidate for deputy and went to my father’s company to advertise. When I saw her, I shouted, “I’m a big fan of your son!” ” Of course, she could not praise more the work of her son. On her advises, George went to his studio on Rua Siqueria Campos at Copacabana. Junior loved the project and sent him to Arthur Verocai to improve the arrangements. Without money, the decision was taken to record everything at Junior Mendes’ studio on an 8-channel mixer. It was a small set-up but the emotions were there! George surely had other plans for some of his songs but without the budget, they ended up doing everything the best they could. And they did very fine with a top-notch team of musicians: Paulo Black on Drums, Arthur Verocai on Guitar, Ricardo Do Canto on Bass and Helvius Vilela on Keyboards.Leaving the studio with the tapes, George tried to knock doors of international labels, but none did even dare to give him an answer. With less than 1000 copies pressed back in the days and without any distributor or label behind him, he went with proud to record stores, but received nothing than a strong reality check regarding the difficulties for a young Brazilian artist to achieve something on the saturated market of the 80s. Even for free, record stores didn’t want it. In the end, he ended up giving copies to friends and families, knowing deep inside that the songs were good! George tells: “I decided to leave, calm and conscious. I’ve still made three more albums, however on tapes, as it was more affordable. This time, just for my pleasure…”. Thirty-five years after, it’s with great emotion that this first album by George Sauma Jr. is now made available as Vinyl LP with its original offset printed innersleeve & CD.

DOWDELIN explores as a tireless ever moving trailblazer a path where Creole jazz, electronic dancefloor sounds and Caribbean percussions come together to create a unique Future Kréol feeling. Dowdelin’s a Lyon-based trio exploring Afro-futurism in its Creolized form, plunging the traditions of the French West Indies into a great fountain of electronic youth glazed in jazz, in a way that few have so far. It all began, or not quite actually, when the singer Olivya contacted David Kiledjian (Fowatile). It is not yet the moment and Dawatile then doubts the relevance of a group with soul influences in English, with a non English-speaking singer... But they stay in touch, and a year later, an idea sprung: what if Olivya sang in Creole, her mother tongue. This is Dowdelin’s genesis: two individuals, constantly exchanging, in a quest for a Creole feeling chiseled by electronics.Dowdelin illustrates this art of blending: the search for the recognizable ancestral flavor in the moment, pairing it with an unusual influence, shaking everything to create the texture that will make the difference. Being embroidered in the bubbling afro-futuristic scene and confirming the return of Caribbean influences in French pop, Dowdelin becomes a trio when David thinks of an old fellow musician whom he has not met in ages: Raphael Philibert, Guadeloupian poly-instrumentalist omnipresent on the jazz scene, saxophonist for Sonny Troupé, but also a goldsmith in Afro-Cuban percussions and a tried Gwoka player. He is added to the sketched repertoire: it’s a match! Dowdelin transcends the exercise of style and complicity with two multi-instrumentalists, who by their experience, versatility and vision, open the field of possibilities to a singer speaking in her native language. The group brings to the forefront the notions of expression and freedom in music while steering clear of the fixed roles and the clichés.

**** DIZONORD DEADSTOCK ****600W is a non hierarchical workshop organised by an art school team in the west suburbs of Paris. It's more about disability studies than pure outsider art / music considering handicap as a social and cultural fight, anyways we were just stunned at Dizonord when the team showed up and are very happy to propose you a fair amount of copies of this LP !

INFOS“Muscles” is a banging 90’s-beat flavored tune extracted from Bonnie Banane’s 1st EP, Greatests Tits. Recently highlighted with a great DIY video made by Walter Mecca, it’s quickly been acclaimed by many bloggers and DJs. At Favorite Recordings, we also believe it deserves a spinning on your turntables! For the occasion, we’ve arranged a photo shooting with brilliant French photographer Lisa Roze (Keren Ann, M & Sean Lennon, Leon Ware & Quadron,…), resulting in a tasty label artwork. And we fatten the sound thanks to a new mastering made at Carvery Studio (UK).ABOUT WALTERDiscreet and prolific figure of a new French musical scene, obsessional producer mainly feeding himself with muesli, biscuits and VCRs, and quoting references such as G.A Romero, Herbie Hancock, Ice-T, or Kid Chameleon, Walter Mecca is an hybrid artist. With several singles and one LP released on Favorite Recordings, he’s also responsible for the creation of his own label, called Weirdata.Since he started among a rap crew in the early 90s, he never stopped surprising and transforming himself, wearing several hats (rapper, producer, director) and adapting his musical identities under various alter-egos. From the Cut Basic series (released as Dal-gren), to Gaab Squaad, or Breaking Point, we ride through heavy soundfields, hardly classifiable, naturally zigzaging with his skills between meta-hip-hop, destructured House and dirty Nu-Jazz, haunted by synthesizers, talkbox and subliminal.ABOUT BONNIEWhen Bonnie Banane started making music it was so compulsive that she did it first with her dictaphone, then her computer eventually. Initiated early to American music played loud in the car, she’s still inspired by this original packaging (Cameo, Stevie Wonder, Above The Rim, Janet Jackson, Boys II Men ...), but also by some late discoveries (Slum Village Nini Raviolette, Moondog, Bahamadia, Gerard Depardie, ...).Distilling intuitively psychedeliquo-suave and hypnotiquo-tropical vocals, with post-feminist lyrics, sometimes explicit, sometimes inarticulate, Bonnie Banane has delivered her 1st EP called “Greatest Hits” in collaboration with Walter Mecca.