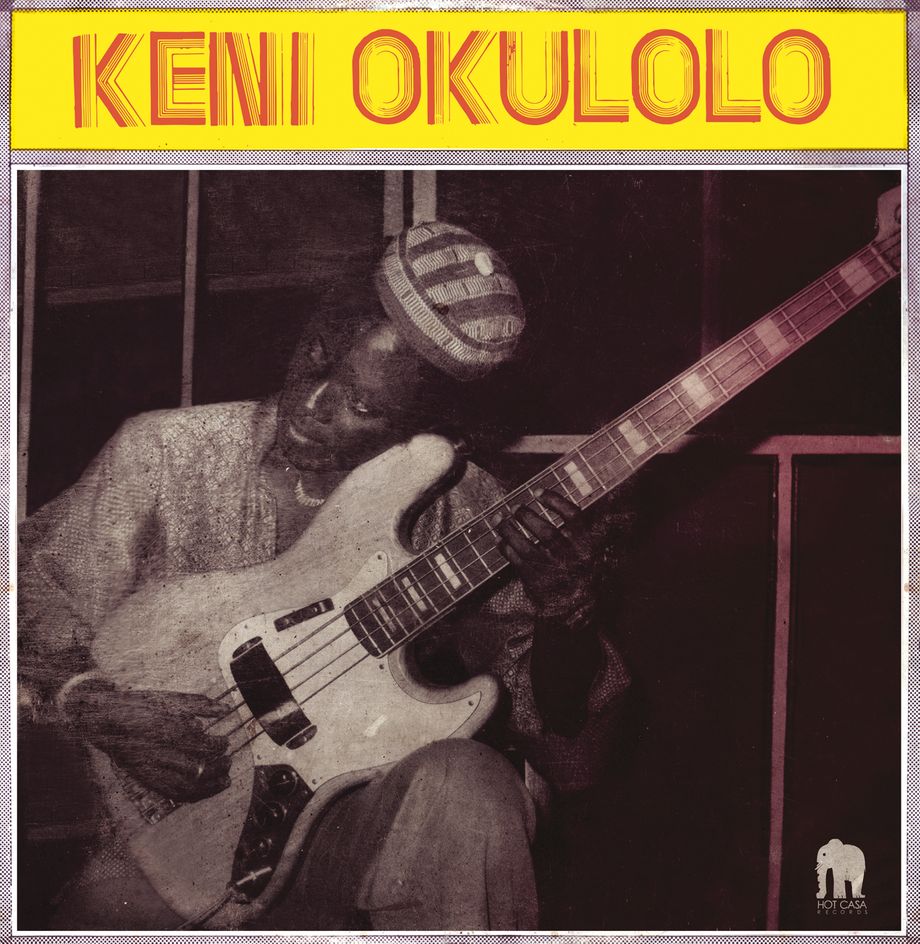 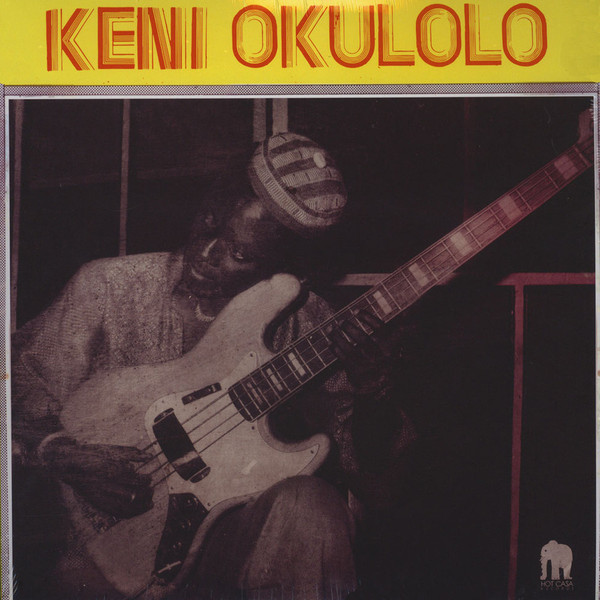 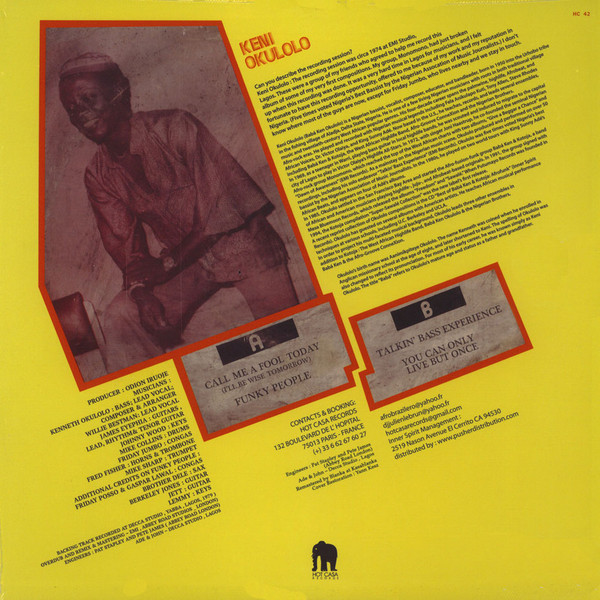 Reissue of an ultra-rare Afro-Funk album by KENI OKULOLO.

First and rare album from the famous bass player and band leader of MONOMONO Nigerian band. 3 amazing tracks recorded in 1974 at EMI studio, taken from his ultra-rare and so hard to find Talkin' bass experience masterpiece album plus an extra track that we decided with the artist to include here. His funky gem “Funky People” was produced during the famous “Mixed Grill” sessions in Lagos.

Fully Licenced with one of a few living Nigerian musicians with roots in both traditional village music and funky West-African popular genres, five times voted Nigeria's best bassist by the Nigerian Association of Music journalists. The original album is so hard to find and cost more than thousand euros, so don’t hesitate to listen to this remastered Afro-Soul gem.

Call Me A Fool Today (I'll Be Wise Tomorrow)

You Can Only Live But Once

The mbira maestro from Zimbabwe Jacob Mafuleni and his wife Martha Thom on vocals and percussion team up with French electro-funk prodigy Gary Gritness for a fresh and surprising take on traditional Shona music.Gary Gritness' subtle electronic arrangements take already hypnotic compositions to a higher dance-floor friendly trance without altering the fragile nature of mbira music . This natural and respectful collaboration resulted in two already classic ‘afro techno’ tracks “Atuka Mondhoro 808” and “Chikoni 808”, released on Nyami Nyami Records. The present album Batanidzo (Together) was recorded live in 2 days at the Red Bull studio in Paris in September 2016 when the band was invited by the Red Bull Music Academy team to participate to their second live music festival.

Following the recent success of French Disco Boogie Sounds, DJ and producer Charles Maurice is back on Favorite Recordings, this time engaging a musical World tour, in the search of hidden productions with a touch of AOR style. The result is AOR Global Sounds, a new compilation made of 8 forgotten and rare tracks produced between 1977 and 1982 in all parts of the globe. At the end of the 70s, many artists over the world were deeply influenced by AOR’s famous stars such as Steely Dan and his classic Aja LP, looking to reach the same attention to sound production and details, and this specific Westcoast style mixing together Pop-Rock standards, with Soul (sometime Disco) and Jazz influences.From Erik Tagg in Netherlands, and Ulla in Poland, to Diane Tell in Quebec, and Nohelani Cypriano in Hawaï, Charles Maurice found a real link between these 8 great songs and artists, in their music clearly infused with this special AOR touch, in a Soulful and Disco way.This perfect soundtrack for the summer has been fully remastered from original versions, and is presented by Favorite Recordings in a deluxe vinyl version, housed in a tip-on jacket. A must have for rare-groove music collectors and many more…

Driven by a vicious and visceral soul, The Buttshakers are known for their fierce and fiery music.Yet after nearly a decade of touring and recording, it was with a different musical vision that they approached Sweet Rewards, their first collaboration with Underdog Records. Accustomed to the raw, primitive sounds of 60s garage rock and the crude sexuality of pre-Motown soul music, A sound they could have continued to dig into again and again. Instead, they decided to take another route: a creative shift, a return to a style of soul music that no longer has to rely on pure energy alone. Exceeding the limitations imposed by their tight yet powerful six person lineup, they opened up this studio session to fully accommodate their ideas and concretize their musical ambitions: a larger horn section creates a richer, scintillating sonority; a touch of slide-guitar opens their creative universe to the open spaces of the far West; the organ vacillates between psychedelic drapery and heartfelt gospel tones; all of this supported by the wicked groove of a percussionist driving the beat on. Their sultry and soulful frontwoman, Ciara Thompson, is here for the first time supported by backing vocalist. An occasion for her to indulge in a few call and- response chorales, a reverence to a gospel background instilled in her from her native St Louis (Missouri), a still vibrant heritage from the city that cradled jazz, blues, country and folk music. Ideal for a sound that never lets down yet remains intuitive to the gradual rise of emotion each song demands. With each new listening, Sweet Rewards reveals something new to the listener: another dimension, a hidden layer.

It was July 26th 1979, following a meeting with the group The Meditations in the Madison Square Garden area, Kingston Jamaica, Dervin Dawes and Donald Marshall paid close attention and exchanged ideas in turn learning much more from an already established group with their hit song ‘Woman Is Like A Shadow’. Ansel Cridland (The Meditations) brought some more talent to the D’Nations by suggesting meeting and talking with Anthony Hill who can sing very well. The Meditations would show the D'Nations good lead vocals and having harmony in sync together in order to develop a better sound for the determined trio.Channel 1 Records Studio on Maxfield Avenue, West Kingston Jamaica; in that era was the top of the line and one of the most prestigious recording studios. There, the D'Nations met and impressed the producer Bunny Hylton from London, who was residing in Jamaica at the time. He provided them with studio time enough to produce the first two songs from the trio ‘See Me in the Park’ and ‘I Am Not Good At Proposing’, released in England in late 1979.In 1989, after good vibes with the most famous backing-band at this time Fire House Crew, the D'Nations composed with them 'Vibes Version' at Music Works studio and then move to Creative Sound Studio on Mountain View Avenue to record the vocal. The result is a monster digital lover tune that will mash up all festivals this summer.